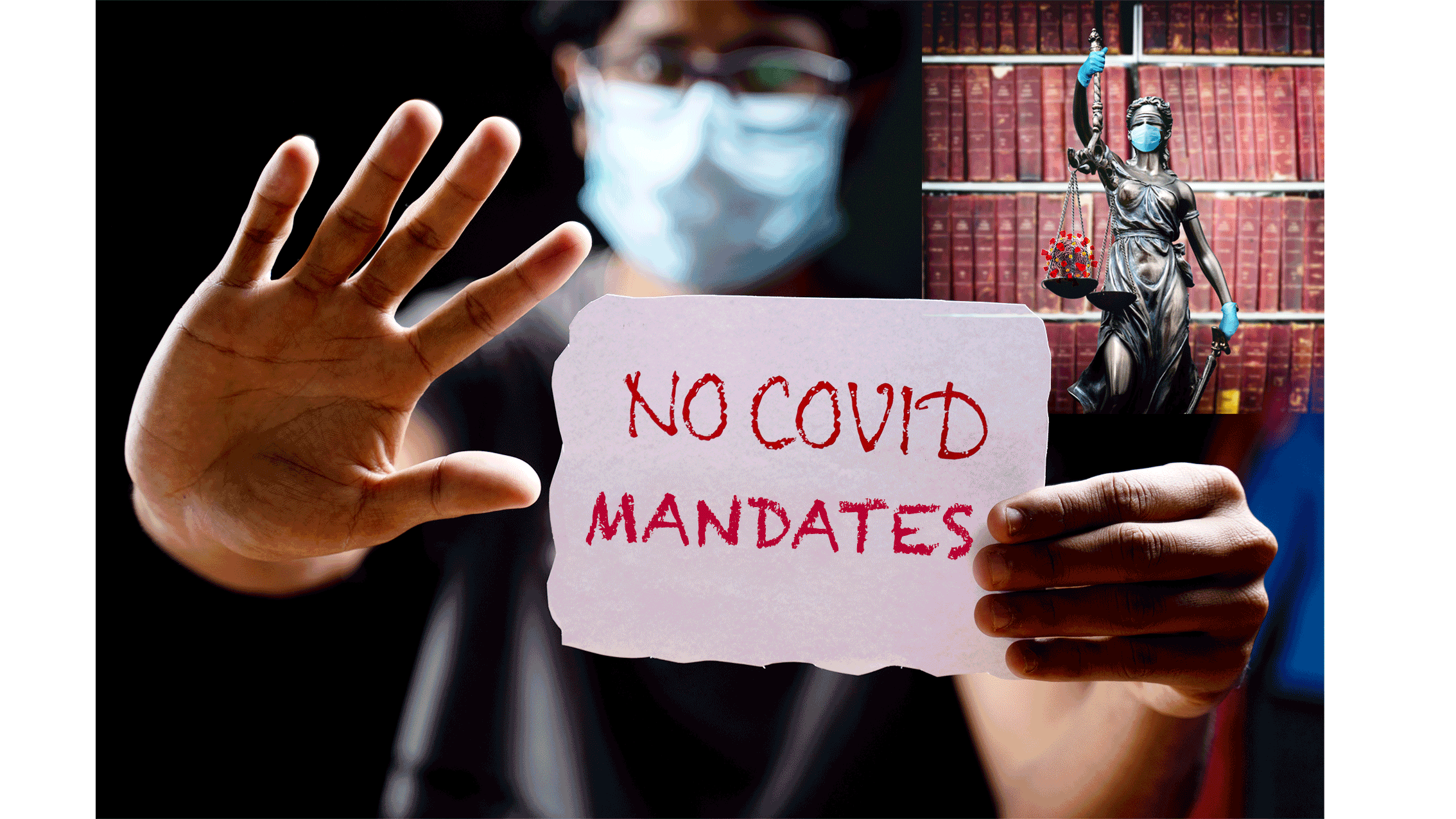 Listen to, read or watch mainstream media reports and you will be forgiven for thinking that there’s nothing that can be done to stop the onslaught of continued coercive restrictions on our previously hard won liberties, rights and freedoms. Mandates are being imposed on those unwilling to be injected with experimental covid injections. The ability to conduct basic everyday tasks removed by the need to ‘show your papers’. The World Health Organization is now getting in on the act by offering ‘guidance’ to countries wishing to introduce digital surveillance on its citizens. In the US, the Department for Homeland Security has labelled opposition to ‘covid measures’ as a terror threat.

Fear not! Opposition is growing daily as can be seen by the multitude of lawsuits and pushbacks now happening on a daily basis. Protests continue to occur around the world from Europe to Australia and beyond as citizens stand up and say 'No' or 'Enough is Enough'.

Needless to say there is little to no mention of any such pushbacks in the mainstream media as the powers-that-be scramble to hold onto any semblance of control that was once thought inevitable.

Canadian organisation, Police Force on Guard, in conjunction with constitutional lawyer Rocco Galati of the Constitutional Rights Centre (CRC) has launched a lawsuit against the federal government’s decision to mandate covid injections for all federal employees. The CRC has also filed a comprehensive challenge against covid measures along with Action4Canada and other plaintiffs, in British Columbia and is currently preparing an injunction against ‘vaccine passports’.

Ontario premier, Doug Ford, said he will not introduce vaccine passports as it will create a split society. That sentiment lasted little more than a day or so before it was announced such requirements would be forced on Ontario residents resulting in the Justice Centre for Constitutional Freedoms declaring they are looking closely at launching an action to prevent the introduction of such measures.

A grassroots organisation, Human Rights Ecuador, that promotes medical freedom has beaten back the threat of vaccine mandates in the Loja Province, in Ecuador. Its action resulted in the vaccine mandate being dismissed by the Loja Ombudsman’s office as it was considered to be unconstitutional.

An emergency mask mandate that discriminated against unvaccinated US citizens has been repealed following a court challenge by vintner William Ouweleen, supported by the Children’s Health Defense.

In New York, Teachers for Choice has come out against forced covid injections stating it’s planning to take legal action against the decision by to mandate injections by mayor Bill De Blasio. The move comes as other labour unions in the City also speak out against such mandates in order for people to keep their jobs.

An administrator at Michigan State University (MSU) who has naturally acquired immunity from covid-19 infection is taking to court after she was threatened with disciplinary action and potentially termination by MSU, if she does not agree to be injected. Sadly the court rejected her claim. However, Todd Zywicki of George Mason University has been granted a medical exemption on the grounds of natural immunity having recovered from covid-19 after he sued the University.

As Australia tries to tighten its stranglehold on its citizens, legal challenges are being prepared and filed across the country. Australian legal team Ashley, Francina, Leonard and Associates is behind a legal challenge to mandatory covid-19 injections for New South Wales citizens. The lawsuit seeks a declaration that public health orders are invalid along with a ban on any further orders. Also in NSW, a class action is being prepared against the Federal Government challenging lockdown rules and vaccine mandates. Another legal team are seeking to hold the Victorian government to account for the way it’s managed the coronavirus crisis, asking the Supreme Court to review whether emergency powers have been abused and seeking a ‘compliance audit’ as to the fitness of PCR tests for use to ‘diagnose’ covid infections.

The introduction of vaccine passports to New York City will result in African American New Yorkers being more likely to be discriminated against due to the high levels of black and Hispanic residents who remain unvaccinated. A fact that has led America’s Frontline Doctors to file a lawsuit opposing the introduction of vaccine passports on the grounds it’s racist and illegal due to its “disparate impact” on Black Americans in the City.

A judge in Nigeria has slapped an injunction on Edo State Governor, Godwin Obaseki, after he tried to ban unvaccinated people from attending church or the mosque and prevent them from accessing their bank account.

Oregon police officers and firefighters are banding together to fight vaccine mandates. In a recently filed lawsuit they argue that the mandates conflict with a number of laws and should be blocked.

Around 50 nurses, doctors and other employees of the Henry Ford Health System in Detroit have filed a lawsuit claiming mandated injections violate their right to bodily integrity. They have also filed a motion for a temporary restraining order to prevent Henry Ford from bringing in the mandate.

Many universities and colleges are now requiring students and staff to be vaccinated in order to be able to return to campus. After the University of Waterloo in Canada sent an email requiring vaccination by all staff and students, an open letter was sent to the university declaring such mandates unlawful. The letter has been signed by parents, staff and students alike all of whom oppose forced injections.

Toronto, Canada saw a courageous Police Constable send a legal notification to her Chief of Police to stand up for her rights to choose not to be injected.

In Los Angeles, hundreds of firefighters and police officers have come together under the banner of Firefighters4Freedom to oppose mandated injections brought in by the City Council. The Los Angeles Times reports that municipal employees are also opposing the mandates.

Australian member of parliament, Craig Kelly has introduced a new Bill to the NSW parliament pushing back against mandated injections - No Requirement for Medical Treatment (Including Vaccination) Without Consent (Implementing Article 6 of the Universal Declaration on Bioethics and Human Rights) Bill 2021. In a stirring speech, he reminds people of the privilege living in Australia brings in terms of freedoms and liberties. It was no surprise that the motion was dismissed, but Craig Kelly continues his fight for those who elected him, along with the rest of Australian citizens.

Thousands of French citizens took to the streets once more to demonstrate against the health pass that has been imposed on them.

Canadian premier, Justin Trudeau, who is currently seeking re-election, has been forced to cancel a rally due to growing protests against the draconian restrictions brought down on Canadian citizens.

Across the US, Just Say No protests are being organised by the Tea Party Patriots to stop medical mandates.

We for Humanity has published an open letter, written and signed by survivors and their descendants of the Holocaust, that speaks out against the covid injection programme due to the number of people being harmed following injection. The signatories of the letter call for “…this ungodly medical experiment on humankind” to be stopped immediately.

In a win for people power, two legal actions in Yvelines and Haut-Rhin in France are reported to have resulted in judgements that rescind the need to present a health pass to enter supermarkets.

Australian truckers protesting against mandated injections have forced the South Australian government’s hand by blockading motorways. The government has dropped the mandates in a move that just goes to show how powerful people are when they work together.

Businesses and even government agencies in Florida who ask for proof of vaccination could face a $5,000 fine after Governor De Santis signed a bill banning such requirements into law earlier this year.

A directory of UK-based businesses has been set up for the 'awake community' and to push back against the discrimination being forced on people by authoritarian governments.

With the introduction of covid passes in Ontario imminent business leaders who believe such requirements are unconstitutional and again peoples protected Charter of Rights and Freedoms in the region have come together to form 'No Health Passes'. These are businesses in Ontario that will not discriminate between individuals based on their medical status.

People power across the globe

On Saturday 18th September 2021, people around the globe, including us here at ANH, will be standing Together to say Enough is Enough. At the last count, 150 cities across 45 countries worldwide have pledged to stand against the tyranny being rained down on them by authoritarian, misguided and sometimes corrupt leaders in the name of the phenomenon called COVID.

If we all stand together and educate those who have yet to understand what is really going on, we can prevail!