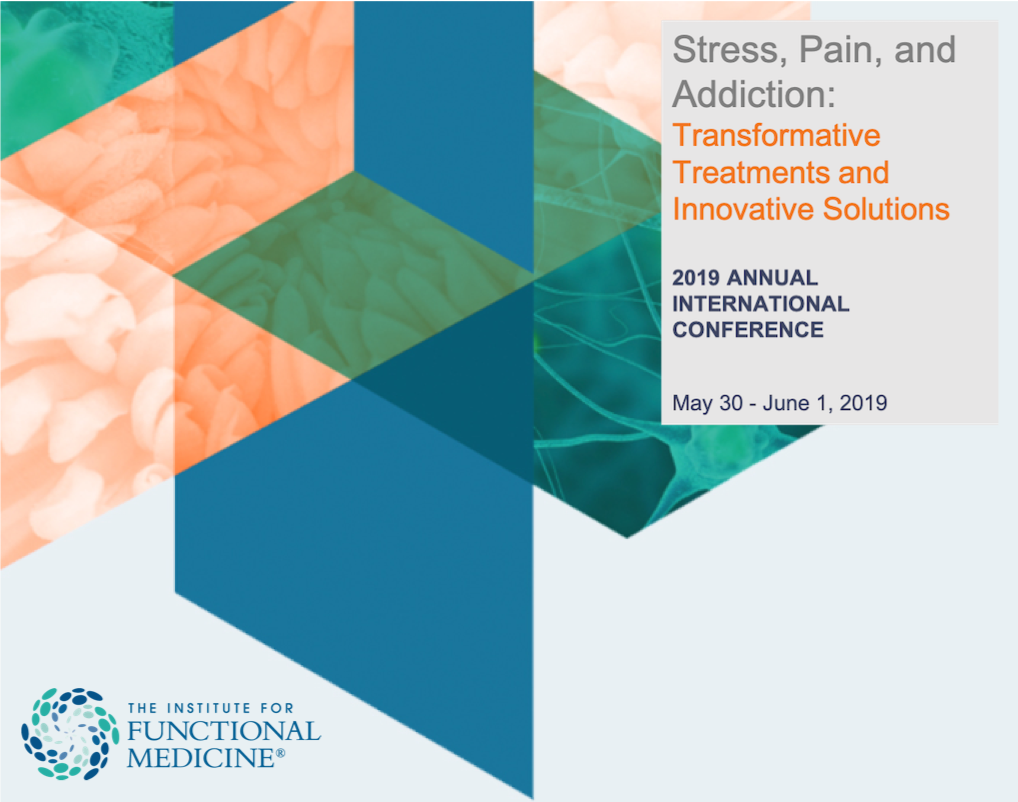 Sixty three percent of Americans report feeling stressed over health-related concerns. Over 60% of opioid drug misusers do so to relieve physical pain. Ninety one Americans die every day from opioid drug use which, in turn, kills more Americans than car accidents. Twenty one million Americans suffer from some kind of ‘substance misuse disorder’. It’s no surprise the USA would host a conference dealing with the interrelated triad of pain, stress and addiction.

But rather than throwing more drugs at the problem, who better to provide guidance based on the latest science and clinical practice than the Institute for Functional Medicine. Its Annual International Conference in San Antonio was the venue. Meleni, our executive coordinator, also a nutritional and clinical psychoneuroimmunology practitioner, and I attended this year’s conference, our 14th, along with over 1500 clinicians and scientists from over 30 countries. It brought together some of the world’s most experienced researchers, scientists and clinicians in the field. Read on for some highlights and take-homes. 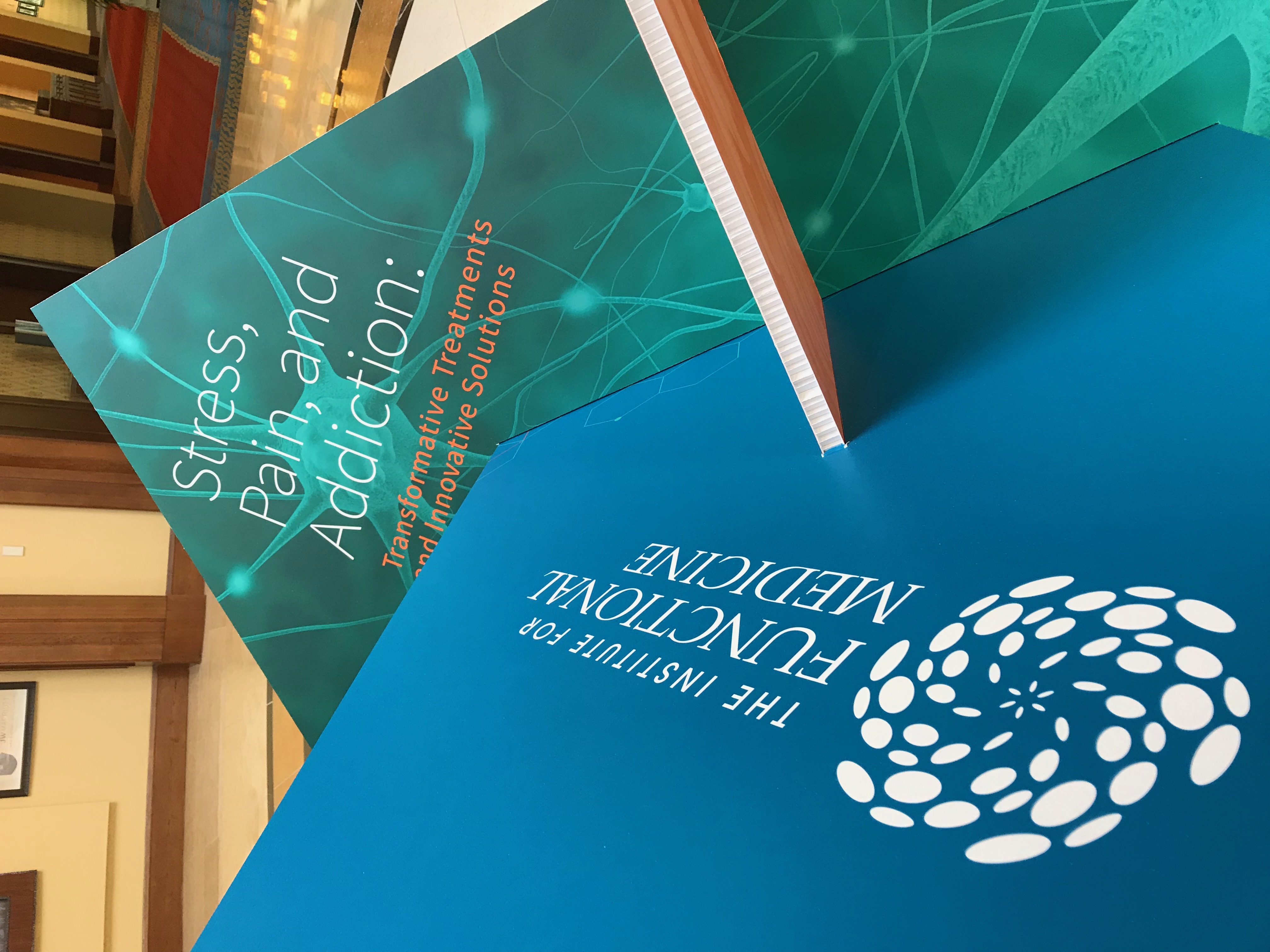 The transition between humans suffering from or dying from diseases for which causes were quite clear, to ones which are multi-factorial and where triggers and mediators are often unclear, has happened in a remarkably short period of time. Some of this is down to the fact that most of us now live longer. But it’s also clear that social and environmental determinants of disease are now by far the biggest drivers of the chronic and autoimmune crisis we’re presently experiencing globally. The latest research out of the American Psychological Association’s Stress in America survey suggests that Generation Z (currently aged between 16 and 22) includes the most stressed members of our society. Among their stressors are news headlines, politics, sexual harassment or assault and concerns about terrorism or mass shootings.

Drugs won’t fix the problem. In fact, they simply contribute to the problem. If doctors, clinicians and others in society aren’t educated to help people find non-drug solutions, the problem won’t be resolved. Therein lies the intent of this year’s conference.

Are we tensegrity structures?

The progressive nature of the conference meant that speakers kept reinforcing the need to look at the whole system in which people live. Dr David Haase likened the human body and it’s environment to a tensegrity structure, a pre-stressed structure comprised of solid bars or rods held together by flexible bands that can be distorted by external pressure.

Genetics and environment set the pre-stress in the system. Chronic stress – to which we are not adapted – tightens the bands. Someone who is well-adapted to stress can flex and bounce back quickly, like the tensegrity structure. A person who has had unresolved early life trauma and is subjected to long periods of chronic stress while being socially isolated, who seldom ventures into natural spaces, will be pushing the boundaries of his or her genetic potential to the limit.

This sets off a chain of biochemical, neurological, endocrinological and immunological events, including perturbations (disturbances) to brain neurochemistry and reduced function (fission) of mitochondria, the energy factories in our cells.

The net effect of these events is to hijack the reward system of the brain and force people into addiction. Addiction becomes a disease, not just something that people voluntarily choose to do.

Cocaine, alcohol, pesticides and sedentary lifestyles cause further mitochondrial fission – so telling a drug addict to pull their finger out and get on the treadmill rarely works.

It’s taken us a long time to recognise the importance of Dr Bruce Alexander’s ‘Rat Park’ experiments. The experiments showed that rats who’d been made morphine addicts in isolated cages would rehab themselves when they were given a partner and a hobby (a wheel). Isolation and disconnection are the most important social determinants of addiction.

The recovered addict and doctor

The presentation by Dr Stephen Loyd, a doctor, addiction specialist and recovered opiate narcotics, alcohol and benzodiazepines addict, was spellbinding.

His remarkable story, along with his interview with one of his patients, Wayne and wife Misty, is captured in the Ross Smith Lecture below. We’d strongly recommend you see it if you want to better understand the mindset of an addict and the ‘Rat Park’ environment that drives so many toward addiction.

Steve Loyd cited that in his case EMDR (Eye Movement Desensitisation and Reprocessing), a specific form of psychotherapy, had been central to his recovery. But he also made clear that for others, the seminal intervention may be different. He went on to highlight that the strand that’s common among all those who recover is connection with others, the effects of this human connection, support system and associated empathy often being impossible to separate from the specific therapeutic effect of the intervention itself.

From addiction to pain

John Kelly MD, the founder and director of the Recovery Research Institute, reminded us to be wary of the language we use. We talk of ‘drug abuse’, but not ‘food abuse’. ‘Food abuse’ is typically recognised as a type of ‘eating disorder’. ‘Substance abuse disorders’ are not recognised as such, ‘drug abusers’ readily being criminalised rather than rehabilitated.

Jeffrey Mogil PhD from McGill University would be unlikely to make it into the list of favourite scientists of an anti-vivisectionist’s scrapbook. He spent years hurting lab rats and mice and seeing how they respond to pain. In the process he and his team discovered the effects of ‘emotional contagion’ – how empathy and human connection can reduce our perception of pain. But that was most notably when the empathy was delivered by a female rodent. He has since transferred his work to humans and has resolved that women are in effect better people than men. He said this gender effect explains why there are more female nurses than men, women being more drawn to helping those in pain or difficulty, males being more than happy to walk away than do the difficult stuff.

Heather Tick MD, with years of clinical experience dealing with those with complex pain problems, explained the mechanisms and physiological disturbances associated with chronic pain. Endorphins will be low, inflammatory markers high, sleep will be disrupted by low secretion of melatonin, and cortisol levels are often high then become very low. She then revealed how opioid use disrupts our in-built (endogenous) hormonal systems, including our endocannabinoid system. No surprise then that cannabis and CBD have been so instrumental in pain relief, a topic executed with aplomb by Dustin Sulak DO.

Why today’s kids are hurting so bad

Liz Mumper MD from the Rimland Center for Integrative Medicine, with whom I personally had some very insightful discussions during the course of the conference, provided fascinating insights on stress, addiction and pain among the young in society. She urged us to read Beth Macy’s book Dopesick (2018, Little, Brown and Co) which exposes the role of Bad Pharma in driving America’s opioid crisis. Every 19 minutes an opioid addicted baby is born in the US. She discussed the seminal ACE (Adverse Childhood Experiences) study that showed how childhood trauma often yielded life-long consequences, including chronic diseases in older adults. Its causes are diverse, including emotional abuse, physical abuse, sexual abuse, emotional neglect, physical neglect, or a parent or sibling being abused. More on the effects of childhood trauma in Meleni's article.

Empathy (that they don’t teach at med school)

Few doctors have the charisma and authenticity of David Rakel MD, one of the foremost researchers and specialists in empathy – and author of the Compassionate Connection (2018, W.W. Norton & Co), now Professor and Chair of the School of Medicine in at the University of New Mexico in Albuquerque.

You’ll get something of a flavour of his approach in the video below. In it he stresses the importance of health professionals developing connection and therapeutic relationships with their patients. He argues this is necessary to get away from the failing ‘pill for an ill’ treadmill, and to effectively deal with some of the more complex diseases that now plague society.

Dave Rakel talked about healing-oriented encounters versus projection-orientated ones, the latter being typical of ‘disconnected’ doctors who appear to have a closer relationship with their computer screen than their patient. He proposed that the most important thing a doctor can do for his or her patient is to believe in the patient’s potential.

His research and experience also made him deeply critical of our common abuse of mobile phones. He said “We’re viewing the world through our cell phones. If we’re looking at ‘this’ we might just miss that little tear well up in someone else’s eye. We’re looking at the world through inanimate objects - creating a society that’s [metaphorically] on the autistic spectrum.”

He is a strong advocate for the notion that you experience the world through how you feel, and used the oft-played video of a New York scene, supported by two different audio tracks, as an example.

In a second lecture, a plenary, Dave Rakel discussed the work he is leading along with Tracey Gaudet on the transformation of America’s largest healthcare system, through the VA (Veterans Health Administration). The work helps both veterans and clinicians to collaborate much more closely as part of its Whole Health partnership program and initial results show considerably better outcomes than standard care.

De-stressing in the final lecture on stress

The final highlight – and it really was masterful – was almost more entertainment than education! And that might sound odd when you hear it was a lecture on the human stress response. But for those of you who know the man, you will understand. The lecture was delivered by none other than world-renowned primatologist, neurologist and author, Dr Robert Sapolsky, currently professor of Neurology and Neurosurgery at Stanford.

You’ll get more than a feel of it from the following 2017 lecture at the Beckman Institute (in fact large parts of it were verbatim!) It’s a must-see for anyone who is interested in stress and our insufficient adaptation to 21st century human life.

We hope – in this piece, along with the links and videos – you’ll find something to help you in your own health journey, or those close to you who might benefit from your support. If you’re a health professional, dig a bit and you’ll find some clinical pearls.

The most important ingredient in health care

I’ll sign off with one comment from Dave Rakel that I can’t get out of my mind. He told us that the long and short of years of his research on empathy and compassion was that love is more important than any medicine or therapy. But he added, “In research, we can’t call it love. Instead, we have to refer to it as ‘unconditional positive regard'". Umm.