Supergran versus the GM industry

We love a real life ‘David and Goliath’ story, and they don’t come more empowering or inspiring than this one! ‘Supergran’ Pamm Larry is a US farmer, midwife, and businesswoman turned tireless grassroots campaigner. It’s largely thanks to her efforts that, in November 2012, Californians may get the right to vote on whether foods containing genetically modified organisms (GMOs) should be labeled as such. Pamm became so disheartened by the state of the food system that she decided to get informed – and then actually do something about it!

She initiated the Committee For the Right to Know and set up the ‘Label GMOs – it’s our right to know’ campaign, with what has been described as, “…her galvanized cadre of concerned citizens (who) represent the sane, spirited voice of a growing number of skeptical Americans who don't necessarily trust better living through chemistry”. The risks posed to humans, animals and the environment by GMOs and related technologies are becoming clearer all the time, and it’s obvious that all citizens on our planet, Americans included, should be given the option to avoid consuming genetically engineered foods if they so wish. But without the mandatory labeling of GMO-containing foods—how are Americans able to choose? 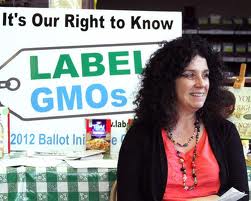 Pamm, along with many others, believes that the consumer should have the right to choose whether or not to buy foods containing GMOs. Quite simply, mandatory labeling would afford buyers with this choice.

The ‘Label GMOs’ campaign went viral very quickly, gaining more and more consumer and industry support, and in November 2011 the campaign committee submitted the California Right to Know Genetically Engineered Food Act to the State Attorney General. Pamm and her team are still working hard to collect the 800,000 signatures that are needed by April 22nd 2012. Because California Ballot Initiatives need physical signatures, the campaign can’t simply circulate a petition on the Internet. In true grassroots campaign style, there are events to attend and local groups to be joined – two great ways of getting people’s signatures. Just yesterday, our executive director Rob Verkerk met with Pamm and her team, to help ensure every effort is made to maximize the reach and effect of the campaign. Few doubt it will be tough, given the wads of cash Monsanto and others are throwing at a counter campaign.

As Mike Adams from Natural News points out, why are the large corporations so shy about advertising their supposedly wonderful, lifesaving GMOs in food? You would think they would be falling over themselves to tout their genius food. Could it be that, just maybe, they want to slip GMOs into the food supply under the radar – because they know only too well that most people feel very uncomfortable about eating genetically engineered foods and would therefore prefer to avoid buying them?

Pamm Larry is a shining example of the impact one person can have if determination and knowledge are applied. We applaud her fierce determination and wish the ‘Label GMOs’ campaign all the success in the world. And, of course, we encourage all of our US supporters to get behind this campaign and help drive it to victory!

- Attending one of the Label GMOs events

- Finding and joining a group near you