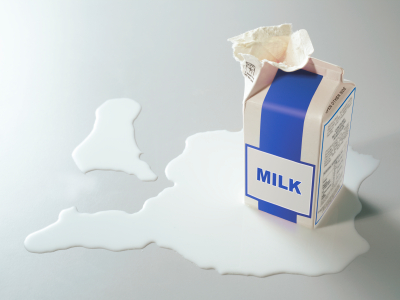 If successful, will this initiate a global trend for a new category of low calorie junk food and drink?

Many of the global trends for processed foods are born in the USA. Carl’s Jr and McDonalds not only helped make the USA the ‘fast food nation’, they also made junk food of this type all the rage globally.

As author of the award-winning bestseller, Fast Food Nation, Eric Schlosser reminds us:

It seems, as you’ll see from what follows, that hiding aspartame in dairy products might be the next big thing. It follows that the idea would appeal to Big Food given the amount of publicity given to excessive carb consumption—along with lots of bad press on aspartame. And let's face it, Big Dairy has already secured its seat at the government nutritional advice table in the US and the UK.

The US Food and Drug Administration (FDA) has announced that two organisations representing the interests of the US dairy industry have filed a petition requesting that the Agency amend the ‘standard of identity’ for milk and various other dairy products to allow the use of ‘non-nutritive’ sweeteners, such as aspartame as an optional ingredient. But guess what? They don’t want this inclusion on labelling. They argue, unconvincingly in our view, that this would promote more healthful eating practices and reduce childhood obesity!

The petitioners are none other than the International Dairy Foods Association (IDFA) and the National Milk Producers Federation (NMPF). These organisations mean business—quite literally.

The current standard of identity for milk and other dairy products allows only ‘nutritive sweeteners’ in the optional characterising flavouring ingredients (e.g chocolate flavouring).  However, the IDFA and the NMPF want ‘any safe and suitable sweetener’ to be used in this context.  This would include the controversial and potentially dangerous non-nutritive sweetener, aspartame, along with its other artificial cousins.  The petition also requests that the standards of identity for the following dairy products be amended to provide for the use of any safe and suitable sweetener in the optional ingredients: acidified milk, cultured milk, sweetened condensed milk, nonfat dry milk, nonfat dry milk fortified with vitamins A and D, evaporated milk, dry cream, heavy cream, light cream, light whipping cream, sour cream, acidified sour cream, eggnog, half-and-half, yogurt, low fat yogurt, and nonfat yogurt.

US dairy industry: 1 US Children: 0

Non-nutritive sweeteners in the flavouring of dairy products are actually already allowed under the existing regulatory scheme. But of course their inclusion now requires specific, mandatory labeling that alerts consumers to the presence of artificial rather than natural sweeteners and flavours.

Amending the standard of identity for milk would remove the 'necessity' for labels that the IDFA and NMPF consider “unattractive” to children, such as use of the wording, “reduced calorie”.  These dairy organisations have also argued in the petition that “consumers can more easily identify the overall nutritional value of milk products that are flavored with non-nutritive sweeteners if the labels do not include such claims”, and that “consumers do not recognize milk—including flavored milk—as necessarily containing sugar”.  For example, the petitioners want milk flavoured with aspartame to be simply labeled as ‘milk’, so that consumers can “more easily identify its overall nutritional value.”

These arguments don't make an iota of sense to anyone interested either in promoting good health or, for that matter, responsibility and transparency of Big Food.

It’ll be fascinating to see if the US dairy industry can get this by the FDA—and more importantly the growing group of aspartame-concerned US citizens.

It certainly won't wash with informed consumers who already understand the risks inherent in the use of aspartame or other artificial sweeteners.

Is this déjà vu?

Confounding and misleading consumers with deceitful labelling is nothing new to the USA.  Last year saw a pitched battle waged in the State of California to get truthful labelling of GMO's. Unfortunately Big Food played a dirty game and narrowly won the first round, but other states are lining up to take them on again. Consumers have had enough of being treated as fools and used to increase corporate profits. As we pointed out last week, artificial sweeteners are more likely to contribute to obesity rather than reduce it. So enough of the flimflam – product labels should tell the truth about what's in them. If an ingredient has to be hidden, you can bet your bottom dollar it isn't worth putting in your mouth!

Time to speak out to FDA!

Please have your say. Follow the instructions provided, and remember to include the reference: Docket No. FDA-2009-P-0147.

You’ll also be hearing more about this from our colleagues at ANH-USA in due course.