With one exception, British supermarkets are no longer guaranteeing that their poultry isn’t fed on genetically modified (GM) feed.  Why are customers’ wishes being ignored yet again?

At the end of last week, UK-based supermarket giant Tesco announced that it was joining Asda and Morrison’s and abandoning its policy of sourcing poultry fed exclusively on non-GM feed. The company’s statement attempted to justify its clear betrayal of its customers’ wishes by blaming the change on Tesco’s suppliers and farmers. Widespread reliance on GM varieties of soy – “The best source of protein to feed livestock” according to Tesco – and pollution of non-GM soy with GM material are making it, “Increasingly difficult for them to guarantee that the feed they use is entirely GM free”.

After allowing that announcement to sink in over the weekend, three more of the UK’s largest food retailers declared that they were following suit. Sainsbury, the Co-operative and Marks & Spencer will continue to stock non-GM, organic animal products, with Sainsbury also offering a few more non-GM options.

Race to the bottom

To what degree these new policies represent a change of course for the companies involved is clear from the diagram below, which shows the situation prior to the recent changes. It marks a complete reversal of policy for Marks & Spencer and a fairly major shift by both the Co-operative and Sainsbury, leaving Waitrose as the only UK supermarket with a principled position against GM. Worst of all, mandatory labelling of foods containing GM ingredients in the European Union (EU) doesn’t extend to products derived from animals fed GM feed. Unsuspecting Brits, saddled with a slavishly pro-GM establishment, are now forced to wander a featureless GM food desert to find the shrinking oases of unmodified animal products. 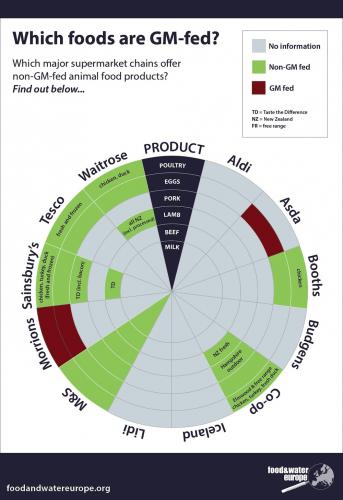 Predictably, Tesco points to the UK Food Standards Agency’s (FSA) opinion that, “Food from animals fed on authorised GM crops is considered to be as safe as food from animals fed on non-GM crops”.  As an agency of a pro-GM government, however, the FSA blithely ignores the mounting evidence that this reassuring picture is utter nonsense.  Since animals fed GM feed can develop multiple health problems, up to and including cancer, it begs the question about how safe it is for humans to consume products derived from those unhealthy animals.  Several studies have demonstrated the potential for flow of GM material, such as proteins, from the guts of animals fed GM feed to animal products consumed by humans, such as meat and milk.  More worryingly, the possibility also exists for so-called horizontal transfer of foreign genes to humans.  Even research commissioned by the GM-loving European Commission has identified alterations in immune system components in animals fed GM feed, although the authors downplayed the significance of their results.

The story took an interesting twist with the release of a statement by Cesar Borges de Sousa, President of ABRANGE, the Brazilian Association for Producers of non-GMO Soy.  Professing himself “puzzled” by the UK supermarkets’ decision to ditch non-GMO soy, Mr de Sousa said that, “The current situation...has nothing to do with the soy being GMO or Non-GMO; it is the result of a slow down in Brazilian exports...caused by increased demand...There is a shortage of berths for mooring ships in virtually every Brazilian port.  In some cases, ships must queue for 30–40 days just to dock and load.”  According to ABRANGE, UK supermarkets may be overly reliant upon a single supplier that has decided to discontinue non-GM soy: “This change could well have as much to do with interest in opening the UK to imports of GM soy from the USA than to the temporary slow down in Brazil”.  And who’s the major US supplier of GM soy?  It is, of course, Monsanto, but it’s unclear whether the company – or one of its subsidiaries – has been supplying non-GM soy to UK supermarkets.  Furthermore, published figures support the Soil Association's Peter Melchett when he says that there is plenty of non-GM soy to go around.

Looking at the big picture, it’s difficult to escape the conclusion that we’re looking at one of two things.  Either it’s an attempt by the biotech companies and their bureaucratic enablers to irreversibly pollute the food supply with GM – or, in the worst-case scenario, we are being presented with an ongoing, stage-managed revelation that GM is already ubiquitous in the supply chain.  Either way, the end-game is the same: to sidestep public disdain for GM by convincing everyone that it’s too late to do anything about it.  The solutions are increasingly simple and stark, as shown in our ‘Call to action’ below: go local, go organic and/or grow your own!