Home News How much longer can the biotech industry bury GM danger signals?

How much longer can the biotech industry bury GM danger signals?

Last Wednesday, Rob Verkerk and I made the trip to London to attend a panel discussion at which one of the speakers was to be controversial genetically modified organism (GMO) researcher, Professor Gilles-Eric Séralini. Even in Prof Séralini’s enforced absence, it was abundantly clear that his 2012 long-term rat feeding study of NK603 GM maize and Roundup fertiliser has been deliberately and unfairly trashed – and should be a springboard for further research. 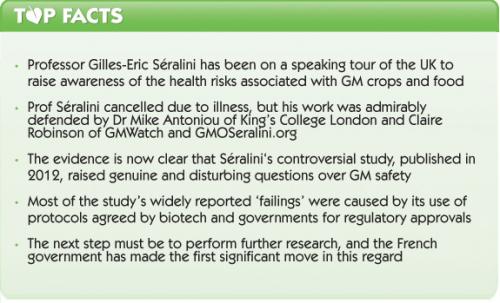 Does the UK Parliament make you sick?

Prof Séralini was in London as part of ‘GM Health Risk Week’, a series of events designed to raise the public profile of, yes, the risks to health posed by GM foods.  No doubt, Prof Séralini was inspired to get involved with these events following widespread criticism of his research by limited elements of the scientific community – and, probably more importantly, the mainstream media.

Earlier in the day, he was taken ill while presenting to Members of the UK Parliament (MPs) on this very issue, and was too unwell to speak at the evening engagement. We’d have loved the opportunity to look him straight in the eye and get a first-hand impression of where he’s coming from and whether he is, as we and many others believe, a brave and independent researcher who is standing firm against a concerted smear campaign.

With or without Prof Séralini, however, we learned some very interesting things about his 2012 research paper, Long term toxicity of a Roundup herbicide and a Roundup-tolerant genetically modified maize – which, if the mainstream narrative is to be believed, drew indefensible conclusions by harnessing incompetent methodology to unfocused science. Below are some of the key points.

Perhaps the most important distinction in the entire ‘Séralini affair’ is that his 2012 study was designed as a toxicity study, rather than a carcinogenicity study. The tumours that developed during the study surprised the researchers as much as anyone else.  Their aim was to investigate any differences in measurable toxicity if the duration of Monsanto’s own 90-day toxicological study, used to gain regulatory approval, was extended to 2 years. Prof Séralini’s group chose this study duration given the typically 2–3-year lifespan of the cancer-susceptible, Sprague-Dawley rat strain they employed. However, they also looked at the role of very low doses of the herbicide Roundup (glyphosate), allowing a more thorough assessment of the GMO/herbicide cocktail to which humans are now exposed.

Much of the criticism levelled at Séralini et al's 2012 paper assumed – or, in many cases, inaccurately portrayed – it to be a poorly designed carcinogenicity study. The sensible response to this 'canary in the coalmine' research would be to perform more research to confirm or deny the findings, including genuine carcinogenicity studies. In a more scientifically objective world, and with apologies to the experimental rodent population, every single GM plant variety would be subject to multiple, long-term, multi-generational, independently funded feeding trials prior to regulatory approval. The French government has announced research into the health effects of long-term GM consumption, to run alongside a European Commission-funded NK603 carcinogenicity study. Until such trials are completed and more information is revealed about the long-term effects of GM on humans and the environment, we continue to advocate that a blanket moratorium should be imposed on commercial use of GM crops.  Of course, several countries, such as Austria, Hungary, Germany, France, Greece and Luxembourg, have done just this, imposing specific bans on the cultivation of particular commercial GM crops.

The main alternative that we foresee to laboratory animal testing, and which should be run in parallel even if animal testing continues, are very rigorous, long-term, observational studies of farm animals that are already consuming GM feed.  This type of research, known as ‘farmer participatory research’, should be overseen by independent, university-based scientists.  Of course, some farmers have already taken matters into their own hands, and have been reporting much higher rates of adverse effects among animals fed GM as opposed to non-GM feed.  One such farmer is Danish pig farmer Ib Borup Pedersen — and it was a huge privilege to speak with him at the London meeting.  More on this another time… 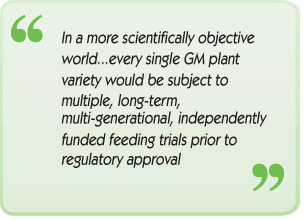 Monsanto’s own study, published in 2004, found differences between the rats fed non-GM maize and those fed NK603 maize. However, the European Food Safety Authority (EFSA) agreed with Monsanto that the differences were “of no biological significance”. If this sounds illogical to you, you’d be in complete agreement with Dr Michael Antoniou, King’s College London molecular biologist and Prof Séralini’s last-minute replacement. After pointing out that independent scrutiny of Monsanto’s raw data revealed statistically significant differences in kidney, liver, heart and blood parameters between the GM- and non-GM-fed rats, he was driven to comment: “I’m sorry, but in the world of science that I live and work in, there is no such thing as having a statistically significant difference in an intervention experiment and for it not to be biologically significant!”

The 2012 Séralini et al study set out to discover whether these initial indications of toxicity translated into pathological findings in the long term, using a study design scientifically comparable to Monsanto’s. As well as a longer duration, it looked at a larger range of health parameters and attempted to separate out those attributable to NK603 GM maize and those attributable to the partnering Roundup (glyphosate) herbicide. The results are by now well known and “alarmed even [Séralini’s] group,” said Claire Robinson, editor at GMWatch and research director at Earth Open Source.

“The amounts of Roundup that were tested...were tiny,” continued Ms Robinson. “What was found toxic was half the amount that’s permitted in EU drinking water”.

Séralini et al’s 2012 results strongly suggest that industry testing of GM crops is inadequate. As Ms Robinson emphasised, “No regulator anywhere in the world demands GM safety testing beyond 90 days” – a period that equates to 7–9 years in humans, who may eat GM foods throughout their lives. The first tumours appeared after 4 months, for example, or about 11–12 years in humans.

As Member of the European Parliament (MEP) Corinne LePage pithily observed, “For EFSA to admit that the Séralini study had any validity at all would have been equivalent to cutting the branch on which EFSA has sat for years”. That said, and somewhat ironically, EFSA’s latest guidelines go a long way toward validating Séralini et al’s methodology.

Further information on the criticisms of Séralini et al 2012 can be found at www.gmoseralini.org.

Dr Antoniou’s presentation explained why, scientifically, unexpected health effects are to be expected from GM foods. He explained that the process of creating GM crop varieties requires the random insertion of foreign DNA, or transgenes, into the host genome; by no means is it a “precise technology” that makes “GMOs even safer than conventional plants and food”. Furthermore, the practice of growing plant cells in tissue culture causes a high rate of mutations in the plant cells themselves.  “The combination of the mutagenic effect and the novel combinations of gene products in the plant can disrupt genetic and protein biochemical function, and this can lead to the generation of novel toxic effects, allergies and altered nutritional value”. Why, we wonder, does the UK's 'anti-environment' minister, Owen Paterson MP, ignore the views of scientists like Dr Antoniou while preaching the biotech industry's sermons wholesale?

The story of Séralini et al’s 2012 research paper is one of an ongoing battle between the well-organised and well-funded pro-GM camp, with its friendly ‘experts’ and a largely pliant media, and an independent research group that raised a worrying red flag over long-term consumption of a GM maize strain and Roundup. It's essentially the same situation that we saw unfold with Dr Arpad Pusztai, Ignacio Chapela and David Quist, and now Australia's Dr Judy Carman.

However hard it tries, we’re convinced the biotech industry and its media, government and regulatory minions can't keep this charade up forever. The genie of GM harm has one hand out of the bottle, and she's desperately close to freeing herself entirely. Once she's out, that's it for GM: game over.

With your help, we can set her – and the world – free before the colossal mistake of GM seed, crops and food becomes irreversible.