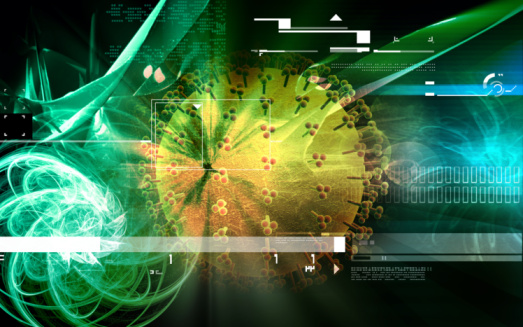 Use of innovative and effective glycoprotein GcMAF challenged by UK, Guernsey and Belgian authorities

A raid on the lab manufacturing the naturally-occuring glycoprotein called GcMAF now puts at risk hundred of Europeans dependent on the product for their health. As a glycoprotein, it’s just a sugar-coated protein, and one that is produced naturally in the body. In some people, including cancer patients, it’s production can be compromised and an increasing body of evidence suggests this may contribute to a host of health conditions including cancer and autism, to name just two. GcMAF also happens to be a powerful immune modulator. There’s of course nothing new about immune modulators, a host of different dietary ingredients ranging from zinc in meat, fish and a multitude of supplements, through to beta glucans in mushrooms and oats, are examples. The trouble is they now represent an important area for new development by Big Pharma. 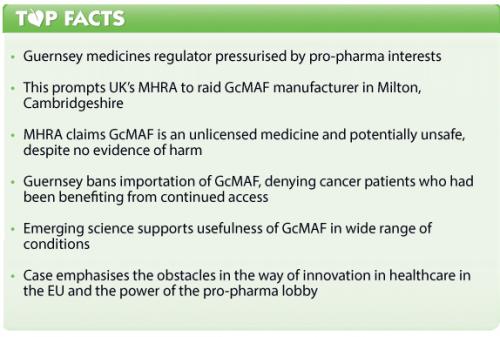 An unannounced raid by the UK’s Medicine and Healthcare products Regulatory Agency (MHRA) on 4 February of the UK manufacturing premises of GcMAF in Milton, plus a lot of pressure on the authorities in Guernsey and Brussels, two key bases for Immuno Biotech, GcMAF’s primary producer, now threaten individuals’ ability to access this life-saving glycoprotein.

David Noakes, the founder of Immuno Biotech responded said, "The MHRA does not want to see this product on the market because its job is to maintain the monopoly and stick up for vested interests in the pharmaceutical industry."

The UK MHRA issued a warning that this ‘unlicensed medicine’ was being made in an unlicensed facility in Cambridgeshire, UK, and that anyone who had purchased it should speak to their GP.  During the raid, 10,000 vials of GcMAF were seized.  The justification given was that the lab didn’t reach required Good Manufacturing Practice (GMP) standards.  Of particular concern for the regulators was that the ‘medicine’ was “not fit for humans” despite the fact that all the evidence suggests that healthy humans produce small amounts of the glycoprotein quite naturally. The MHRA also claimed that the product was contaminated having been made with non-sterile equipment.

It appears that the chain of events that led to the MHRA raid can be traced back to the island of Guernsey, which has long been under pressure to abide by European law affecting unregistered medicines and food supplements (e.g., see Lords Hansard record from 25 Jun 2007: Column WA92). The island’s medicines regulator has been intensively lobbied by UK authorities and business lobbies, including the UK food supplement manufacturers association.

It was in Guernsey that a complaint was initially made by pro-pharmaceutical interests  in relation to the product. That stimulated an understandable response from the Guernsey residents benefitting from it.  Following the raid, the importation of GcMAF has now been banned by Guernsey's authorities.  However, the product has not been on sale per se.  David Noakes has apparently been giving it away free in Guernsey and there are over 100 people taking it, including cancer patients, most of whom have become reliant on the benefits they’ve been receiving and report great success.  Given the legal vagueness as to what is and what isn’t defined as a medicine, it seems that the MHRA is targeting the manufacturing standards and purported risk to human health as a ‘belt and braces’ approach to ceasing use of GcMAF.

The issue has triggered actions further afield. The Belgian authorities are now also investigating the contact address for GcMAF.eu in Brussels.

The Guernsey Board of Health had agreed to the importation of the GcMAF on the understanding it was not  supplied for commercial gain.  It now appears the MHRA’s hardline tactics may have changed their minds.  The despair of the 100 or so Guersey residents who have been benefiting from taking the product is palpable as they face a possible return of symptoms and the plunge back into the abyss of their disease.

Ed Freestone, Guernsey's chief pharmacist, admits, "There is no current information suggesting the product has caused direct harm to anyone's health,” but urges  “anyone concerned about the product, or its ban … to talk to their medical advisor for advice and reassurance."

There is now well over a decade of clinical experience with GcMAF and no evidence has emerged of any ill effects from using this natural glycoprotein.  The high risks and low effectiveness of conventional oncology has driven strong interest in alternatives such as GcMAF, use of which is supported by an increasing body of persuasive evidence. The benefits of glycobiology and the scientific basis for the mode of action and effectiveness in clinical trials of agents such as GcMAF have been emerging rapidly in recent years.

Research papers have been published in highly respected mainstream journals such as Frontiers, the International Journal of Cancer Research and Treatment, the American Journal of Immunology, the Journal of Translational Oncology, and more testifying to its efficacy.

Rather than trying to stamp out something new because it doesn’t immediately have a clear legislative home, or more importantly, because it steps on the toes of interests vested in mainstream oncology, something with this much potential and cost-effectiveness, should be grasped with both hands, rather than be made illegal.  But then people have never been at the heart of any of these decisions.

For the MHRA to to describe the scientists at the manufacturing lab as “hobbyists with a degree in real ale brewing” shows a further iniquitous disrespect for patient’s rights and innovation in healthcare.

Thankfully there are many who disagree, Guernsey residents, a host of clinicians, researchers and patients around the world—and NGOs like ANH-Intl will do what we can to campaign for the public right of access to this natural, health-promoting glycoprotein.

We will keep you posted on the campaign.

Call to Action by Guernsey Residents

We ask Guernsey residents to contact Ed Freestone, Assistant Director and Chief Pharmacist of Health and Social Services Department (HSSD), Guernsey and make clear your concerns about restrictions on access to GcMAF.