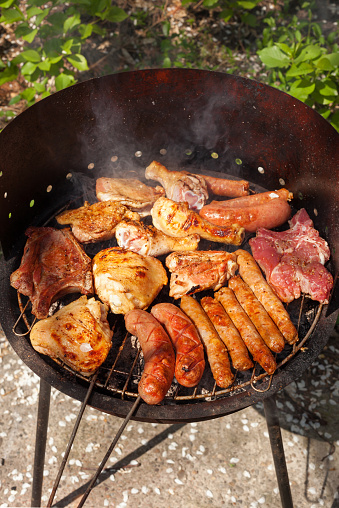 ANH-Intl explains why the latest damning of high protein diets is not relevant to most people&rsquo;s long-term health and weight loss goals

Atkins and paleo diets find themselves in the scientific cross-hairs following publication of a new Spanish study published online in Clinical Nutrition.  The study has found that high protein diets increase the risk of death in older adults who are at high cardiovascular risk. It also found that diets in which high protein replaced carbs, resulted in weight gain. By contrast, those where the high protein intake replaced fats, did not. These results, not the first of their kind, have resulted in flurry of negative media headlines bashing high protein/low carb diets.

The study conducted by a group of 16 Spanish researchers, headed by Pablo Hernández-Alonso from the Universitat Rovira i Virgili, in Reus, Spain, set out to study the long-term benefits, notably in terms of weight loss, as well as the risks, in terms of all-cause mortality, heart disease and cancer, associated with high protein diets. The study population was a middle-aged and older population at risk of cardiovascular disease (CVD) drawn from a Mediterranean population, specifically the PREDIMED (PREvención con DIeta MEDiterránea) cohort.

PREDIMED is a large, parallel group, multicenter, controlled, randomised clinical trial (RCT) conducted in 7447 older adults (aged between 55 and 80 at the outset) with a high cardiovascular risk. To be included, subjects either had to either have type 2 diabetes or three or more of the following: they were smokers, suffered hypertension, had high LDL cholesterol, were overweight or obese (BMI ≥25 kg/m2), or they had a family history of CVD.  Follow-up was of medium, rather than long duration (2003-2009). Macronutrient intake was assessed using food-frequency questionnaires.

The major finding from the study, that made most of the headlines in the UK, USA and elsewhere, was that high animal protein diets, comprising over 1.2 g/kg body weight (i.e. 84 g protein for a 70 kg adult) increased, rather than decreased, mortality from CVD, cancer and all-causes.

The effect of macronutrient composition is complex, and previous trials trying to elucidate health benefits and risks are mixed, often because of big variations in methodology and study population. But of course trials are not the only way in which we can learn about these complex relationships, and many trials ignore key factors that might influence them. Health professionals, lifestyle coaches, nutritionists, sports scientists, celebrities and many thousands of consumers have also been experimenting with higher protein diets. The bottom line is that they have caught on because they work for a lot of people. However, there are a few common adjuncts that are often associated. One is that those engaging with higher protein diets often also increase their activity levels or at least are highly active, and they may also engage in intermittent fasting.

With this in mind, following are some of our key concerns with accepting the bald findings of the Spanish trial:

How much protein do you want to consume?

In our view, the present study does little to change our understanding of how diet and lifestyle can be manipulated to optimise health.

General advice, that takes into account the main findings of the Spanish study, includes the following:

This dietary guidance is fully inline with ANH-Intl’s Food4health plate, which equates to macronutrient ratios from an energy contribution viewpoint of around 25% protein, around 45% fat and 30% carbohydrate.