Stephanie Seneff PhD, Senior Research Scientist at Massachusetts Institute of Technology (MIT) is a busy woman. We were keen to speak with her on the back of the IARC's decision to classify glyphosate, the world's no. 1 herbicide, as a "probable carcinogen", to the great annoyance of Monsanto.

Glyphosate is the main active ingredient in Monsanto’s widely used herbicide Roundup, sprayed heavily on many genetically modified and other crops, such as wheat, barley and other grain varieties. The IARC's classification has prompted actions that may ultimately reduce usage in various parts of the world. We think a moratorium on its use is more appropriate, but believe very careful thought would need to be given to substitute herbicides.

Dr Seneff managed to find some time to talk to us. You can either listen to the audio of what she has to say, or read the transcript below. 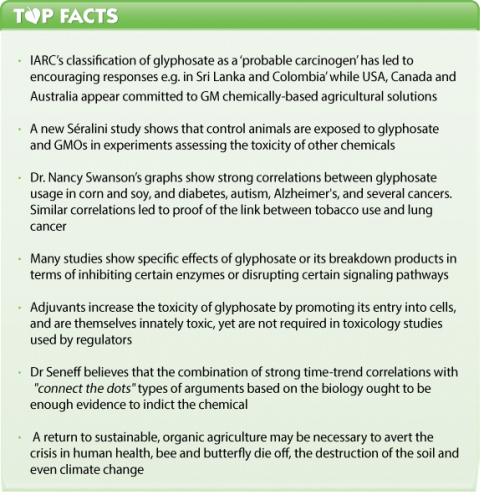 ANH: What impact do you think the International Agency for Research’s (IARC) March announcement that glyphosate be classified as a ‘probable carcinogen’ will have on glyphosate usage in both industrialised and less-industrialised countries?

Dr Seneff: I hope it will have a dramatic effect and be a wake-up call for nations around the world.

ANH: Do you think the IARC’s classification will alter different governments’ regulatory approach to glyphosate-containing herbicides?

ANH: How influential will the IARC classification be in catalyzing further bans in countries like Sri Lanka and Colombia that have already imposed limited bans?

Dr Seneff: It's hard for me to know this, but certainly the response from Sri Lanka's new president, [Maithripala] Sirisena, is encouraging to me, and I hope it will inspire other governments to follow suit.

ANH: What about countries like the USA, Canada and Australia that have long been avid defenders of glyphosate’s safety?

Dr Seneff: The governments of these countries seem to be thoroughly committed to the GM chemically-based solution to agriculture, and I think they will be the last to respond.

ANH: We know you’re a signatory to the Independent Scientists Manifesto on Glyphosate that is urging local governments to stop spraying glyphosate. What kind of a hearing are you getting, what outcomes do you expect or hope for and have some authorities already stopped spraying as a result of the Manifesto’s efforts?

Dr Seneff: I am encouraged by some activities in cities in California, particularly Richmond, which has banned the use of glyphosate in public spaces. I hope there will be continued momentum for other cities to follow suit.

ANH: The science is rarely black and white on matters toxicological. Causal evidence is particularly hard to show. But if put on the spot and asked to produce the strongest evidence of causality for specific adverse health effects, what published science would you refer to?

Dr Seneff: There are many research papers that show toxic effects of glyphosate in specific experiments, and it is impossible to summarise all of them here.

The most remarkable animal studies that I see are coming out of Prof. Séralini's lab in France, particularly the landmark study on rats exposed to Roundup and GM feed over their entire lifespan, where the rats experienced kidney and liver stress, massive tumors, and shortened life span. He has a new paper out which shows that control animals are exposed to glyphosate and GMOs in experiments assessing the toxicity of other chemicals. I find this to be astonishing and very disturbing.

To me, the most striking evidence linking glyphosate to human health issues is the collection of graphs that Dr. Nancy Swanson has produced showing strong correlations between glyphosate usage on corn and soy crops and a large list of diseases that are currently on the rise in the United States, especially diabetes, autism, Alzheimer's, and several different cancers. The idea that "correlation does not mean causality" has been way overemphasized in an attempt to get people to ignore these data, but it was just such correlations that eventually led to proof of the link between tobacco use and lung cancer.

There are many studies that show specific effects of glyphosate or its breakdown products in terms of inhibiting certain enzymes or disrupting certain signaling pathways. A large part of what I want to do in my research is to figure out how the diseases identified by Nancy Swanson can be explained by the known specific effects of glyphosate; that is, to connect the dots.

ANH: There is a lot of attention being paid not only to glyphosate as the active ingredient, but also to adjuvants in Roundup formulations. In your opinion, how serious a health threat are the adjuvants compared with glyphosate itself?

Dr Seneff: It's very clear that the toxicity increases a great deal when glyphosate is introduced together with the adjuvants. It's disturbing to me that the adjuvants are not required in toxicology studies used by regulators. The adjuvants both increase the toxicity of glyphosate by promoting its entry into cells and are themselves innately toxic.

ANH: Do you also have concerns about health or environmental consequences of cultivation of genetically modified crops themselves, aside from the herbicides or other pesticides used on them?

Dr Seneff: My research focus has been on the chemical glyphosate, but I do think that the GM engineering probably also has the potential to cause harm. I haven't studied them enough to be able to speak with confidence, but I also feel that even the experts don't understand them enough to be able to predict how they might behave in biological systems. I think we are behaving recklessly in rushing this technology to market.

ANH: You’ve made some interesting associations between GMOs, glyphosate, Roundup and human health in relation to autism, Alzheimer’s disease, obesity, digestive disorders, depression, and breast cancer. At what point, and based on what associations, do you think non-causal evidence is sufficient to warrant a safeguard action?

Dr Seneff: I don't like this term, 'non-causal evidence'. If you are convinced there is a toxic chemical that may be causing an alarming rise in a disease, the first thing you will do is eliminate all chemicals whose exposure rate is going down. Correlation is a necessary but not sufficient piece of evidence implying causation. If you look for toxic chemicals that are going up in step with the rise in autism in the US, for example, I have not been able to find another one that matches nearly as well as glyphosate does. I believe that the combination of strong time-trend correlations with 'connect the dots' types of arguments based on the biology ought to be enough evidence to indict the chemical. This is a way to provide a plausible model for how the chemical could cause the features observed in the disease.

ANH: Monsanto is known for defending its products aggressively. Have there been attempts to suppress or discredit your work, and if so, can you elaborate on this?

Dr Seneff: I think it must be the case that people are paid to go through my papers with a fine-toothed comb looking for anything that they can critique to try to discredit the work. They also like to argue that I don't have adequate training for what I am writing about. Pressures have been applied to the journal Entropy to try to get my first paper on glyphosate published with Anthony Samsel withdrawn.

ANH: If glyphosate loses further favour in agriculture and the home garden, what alternative herbicides do you think will fill the gap and will they be significantly less risky?

Dr Seneff: I do not believe that herbicides are the right answer for farming. I believe we have to return to organic sustainable methods in agriculture, or face a growing crisis not only in human health but also in things like the bee and butterfly die-off, the destruction of the soil, and even climate change.

ANH: Looking ahead say 10 years, what do you think will happen in terms of usage of GMOs and herbicides like glyphosate and 2,4-D? Is it feasible that globally we might become less dependent on them?

Dr Seneff: My dream is that they will disappear from the face of the earth. Once enough people recognize the dangers they pose, hopefully those in power to regulate their usage will act wisely.

Dr Seneff: I just want to encourage anyone listening to this to try to switch to a 100% organic whole foods diet for the sake of their own health and the health of the planet.

ANH: We completely agree that people should switch to 100% organic whole foods wherever possible, thus avoiding the ingestion of both genetically modified and conventional foods contaminated by glyphosate and other chemicals. We too hope very much that the world will respond in such a way as to prevent the use of glyphosate in the very near future.

Thank you for talking to us about your work, Dr Seneff.