Home News Which foods are most likely to be contaminated by glyphosate? 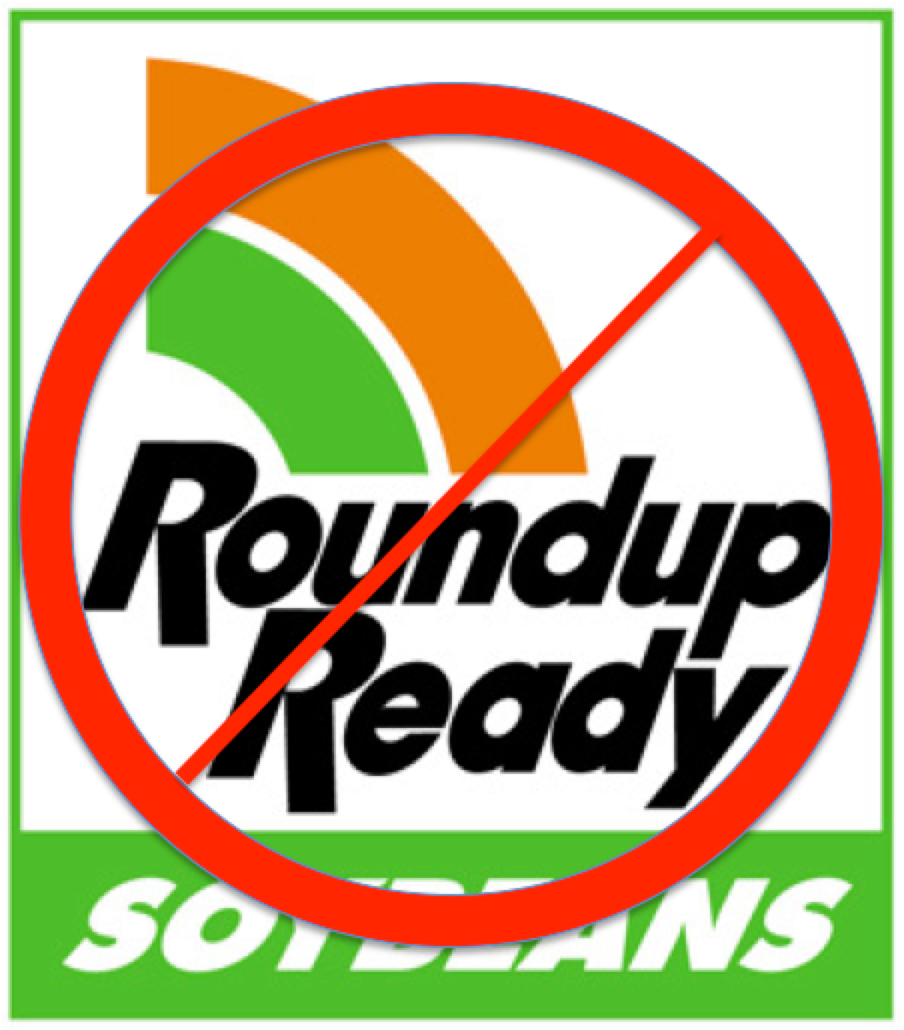 Which foods are most likely to be contaminated by glyphosate?

Glyphosate is the controversial active ingredient in the world’s most widely used herbicide, Roundup. The International Agency for Research on Cancer (IARC) that informs the World Health Organization (WHO) and many other health authorities on cancer risk factors, classified glyphosate as a ‘probable carcinogen’ last March.

In this article, we take a look at the maximum residue levels (MRLs) permitted in the USA and in the EU. We think its one of the best ways of finding out where the highest residue levels are present. Armed with this knowledge, you can then choose to avoid consuming these crops directly or, in the case of animal feed, indirectly.

Any moratorium on the herbicide would also affect the most common type of genetically modified (GM) crops, Roundup Ready crops, that are engineered specifically to withstand Roundup. Not only does the US government not want you to know which foods contain GMOs, it doesn’t publish details on actual glyphosate residues in foods, as it would rather have us to believe the products are safe.

If, like us, you disagree, you can vote with your wallets, and avoid those crops with the highest allowed residue levels. You can also use our suggested template letters and let your stores and political representatives know of your concerns [see Call to Action below]. 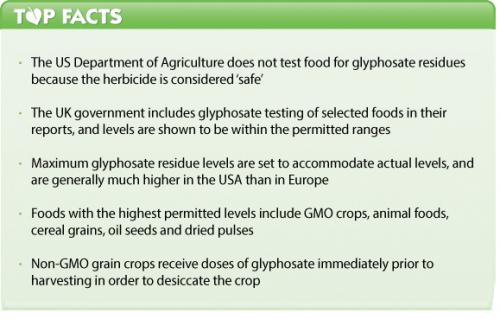 Testing for glyphosate levels in food

Since 1991, the US Department of Agriculture (USDA) has been annually testing thousands of food commodities for pesticide residues, through their Pesticide Data Program (PDP). According to Reuters, they — astonishingly — do not consider it necessary to include glyphosate in the testing (with the exception of soybean testing in 2011), “in part because it has been considered safe”. However, Reuters also report that they received a response from the Environmental Protection Agency (EPA) in April 2015, saying “Given increased public interest in glyphosate, EPA may recommend sampling for glyphosate in the future”.

Unlike in the USA, UK HSE quarterly reports produced by the Department for the Environment, Food & Rural Affairs (DEFRA’s) Expert Committee on Pesticide Residues in Food (PRiF) do check glyphosate residue levels in selected home produced and imported foods. Detected glyphosate residues are reported as within the permitted ranges, with the odd exception eg. a sample of mung beans from China contained a residue of glyphosate at 2.3 mg/kg (MRL is 2 mg/kg). But what are the permitted ranges?

Glyphosate Maximum Residue Levels (MRLs) or tolerances can be checked through registering and checking the US EPA and USDA databases. We found the following information about MRLs on the US Government Publishing Office website.

With different MPLs set for individual groups of foods, it appears to be much less about safety, and much more about the levels being set to accommodate and reflect what actually is. There has been much criticism of this. When a breach of the MRLs is threatened, the remedy appears to be to simply increase the allowed MRLs. GMO soy in the USA is a case in point. As weed resistance to Roundup increased, heavier doses of the herbicide have been applied, leading to higher residues being detected in crops, soil and groundwater. Following US EPA simply announced in 2013 that they would increase the permitted amounts of glyphosate residue in certain crops.

Food in which higher glyphosate levels are permitted in the US

It is perhaps telling that among the highest MRLs permitted in the USA are the following foods (measured as mg/kg or parts per million):-

40 ppm: for oilseeds, group 20 (includes sunflower and cottonseed), except canola

3.5 ppm: for corn, sweet, kernel plus cob with husk removed

Maximum Residue Levels in the EU

MRLs in the EU are determined by European Commission regulation (EC) No 149/208, and these vary among certain foods. MRLs are also set for Trimethyl-sulfonium cation, a residue that results from glyphosate use. In the UK, EU glyphosate MRLs can be checked easily using the Health and Safety Executive (HSE) Search form. Some Member States, such as the UK, use specific MRLs for certain processed foods, since the raw MRLs do not take processing factors into account, such as removal, dilution or concentration of pesticide residues. In the case of bread, white bread has an MRL of 1.05 and for wholemeal bread, it is 3.6.

Food in which higher glyphosate levels are permitted within the EU

Among the highest MRLs permitted in the European Union are the following foods (measured as mg/kg or parts per million. MRLs for animal foods are not provided):-

To summarise: although glyphosate is used in the production of a very wide range of crops including non-organic fruit and vegetables, the foods in which the most glyphosate residue is permitted include GMO crops, animal foods, cereal grain, oil seeds and dried pulses. Roundup Ready GMO crops currently include soy, corn, canola, alfalfa, cotton, and sorghum, with wheat ‘under development’. Perhaps the main reason that grains, seeds and pulses are at the top of the list is because these are the types of crops that receive a dose of Roundup immediately prior to harvest — a process know as desiccation. The justification for this is that the destruction of the plant around the seeds makes harvesting the crop easier for farmers, and water loss enables farmers to gain a better price for the crop.

Time to end the madness

Roundup use is burgeoning in the USA, and has been found in drinking water, urine and even human breast milk. Concerned organisations are calling for long-term independent testing and research on glyphosate herbicide formulations, “including their health effects, how they get into the human body, and current levels of accumulation in people, animals and the environment”. We agree with Friends of the Earth (Europe) 2013 recommendations calling for comprehensive and transparent national glyphosate monitoring and reduction programs, banning of the practice of dessication, re-evaluation of MRLs, and the halting of EU authorisations of glyphosate resistant GMOs.