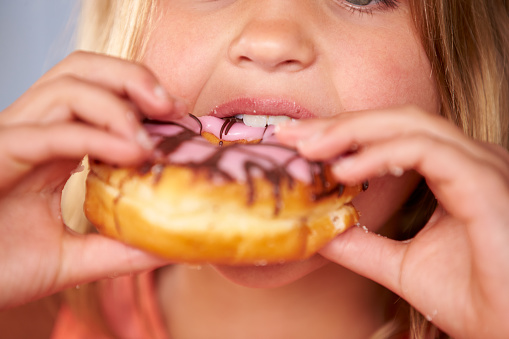 As we discussed last week, the UK government’s advice on carbs is out! There’s 384 pages of the UK’s Scientific Advisory Committee on Nutrition to soak up for those interested in a government committee’s view on carbohydrates.

The most profound change in government advice is a requirement that free sugars represent just 5% of total energy intake. This is half the amount previously recommended for ‘extrinsic non-milk sugars’. Free sugars are the type that come from all forms of added sugar, whether this be by the consumer or the manufacturer, including sugars in unsweetened fruit juices, syrups and honey. It excludes sugars that are naturally-occurring within the cellular structure of foods (i.e. especially fruits) and those in milk.

The SACN also recommends intake of fibre increase from 18g to 30g daily. Parts of the NHS are already recommending this, but the figure of 18g has been the standard governmental recommendation for many years. That’s less because there was hard evidence that 18g was beneficial; more that it gave a signal to the public that the (worryingly low) average adult intake of 14g/day in the UK should be improved upon.

Both these recommendations are entirely reasonable at face value.

What isn’t reasonable, in our view, is the recommendation on how the halving of the current recommendation of free sugars should be achieved. The report states that this should involve a simple substitution of starchy carbohydrates and milk sugars! There’s nothing about consuming more healthy fats, that have over twice the energy quotient per gram, or more protein. More potato crisps and a litre of milk might get you there nicely – but it will hardly assist the obesity and metabolic disease epidemic!

The underlying problem is that the report does not address the way in which carbohydrate quality and quantity interacts with other macronutrients and micronutrients. While the concepts of energy density and fibre density are handled, the report is entirely mute on nutrient density. An equivalent energy intake of carbs from bread or potatoes will cause our bodies to respond in very different ways to the equivalent energy delivered by broccoli or blackberries. If we combine proteins and fats with our foods, this changes the response again. Herein lies the complexity of nutrition, along with the diversity of genotypes among our populations, and the way in which these have in turn be altered by each individual’s environment (epigenetics).

The report also focuses heavily on the way in which excessive added sugars increase tooth decay and cause an energy surplus. These are points of concern because sugars rot people’s teeth and excess intake makes them overweight. However, the report fails to address the more fundamental metabolic issues caused by an over-reliance on carbohydrates as fuels, especially if we continue to ingest them at every meal, as well as snacks in between meals. This over-reliance on carbs as our primary energy source along with sedentary lifestyles is an important reason why so few people achieve the natural state of ‘nutritional ketosis’, in which fat-burning becomes a primary fuel. We’ve discussed this at some length previously.

This latter premise that excess intake of sugars causes overweight is based on the notion that if surplus energy is not burned through metabolic and physical activity, the body converts this energy to fat. While true in itself, the premise ignores the more relevant point that remedying the metabolic disease that is rife in our society can be better achieved by altering macronutrient composition, food frequency and physical activity patterns. Not one or the other. But all three in concert.

The recommendation is still emphatic that 50% of an individual’s energy comes from carbs, with most of this still being starchy carbs and fibre-rich sources (that are often grain sources). This advice is at odds with a growing body of the research and clinical experience. Switching out grains for vegetables still gives you fibre, it removes key inflammatory factors in grains, notably gluten, and it delivers nutrient-dense, complex carbs, rich in phytonutrients. This is the basis for ANH’s Food4health plate and its associated guidelines.

As expected, the SACN has taken a very safe road, especially with its friends in Big Food. The committee lambasts, without mentioning names, full-sugar sweetened beverages of the ilk of Coke and Pepsi, knowing full well that these companies have artificially sweetened or stevia-sweetened alternatives. If mapped out into buying patterns, there may be a shift of public spending from one segment to another, but this would largely occur within the same conglomerate of Big Food companies. In effect, business as usual.

Will any of this translate through to a significant change in patterns of metabolic disase and obesity? Unlikely, we think. But time will tell.

We strongly recommend you follow the ANH guidelines for both food composition, i.e. the Food4Health plate, and in terms of physical activity.

Check out our 4-way shoot-out, comparing our plate with that of Harvard’s School of Public Health (which is generally solid) and the UK and US government food plates (which are problematic and follow some of the same misconceptions trotted out again by the SACN).

Already implicit in the Food4Health plate, if you can avoid buying processed foods, you’ll also be a lot better off. The only downside will be for Big Food and its shareholders.