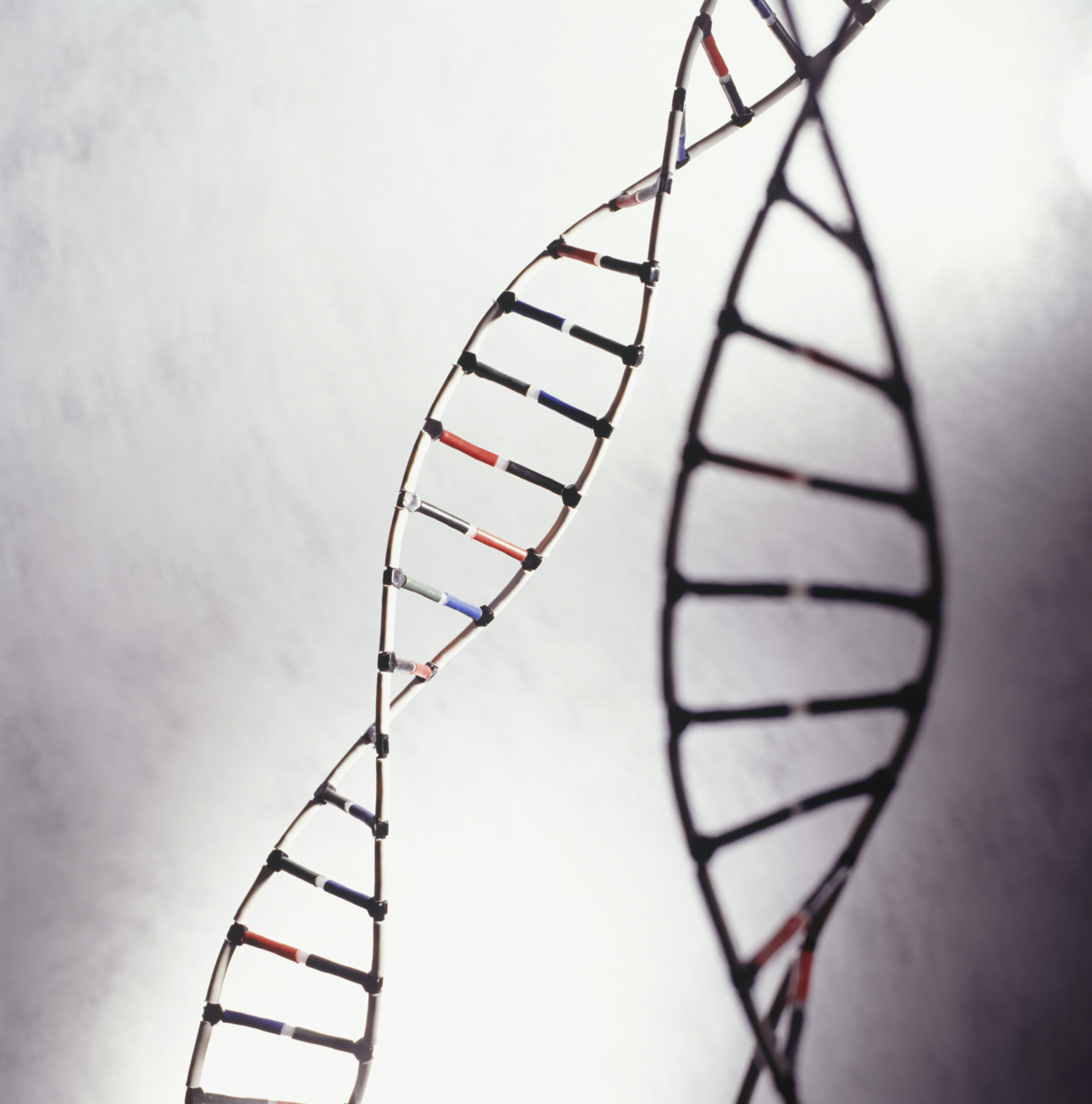 Last Friday I, among several others, gave a lecture at a seminar in London for practitioners on the subject of nucleotides. I’ve been working on various aspects of this category of nutrients, as well as taking them in dietary form at elevated levels, for several years. I’m not planning to stop taking them any time soon, such is their effect and benefit. I’ve worked alongside some of the scientific luminaries in the field, including Professor Angel Gil from the Department of Biochemistry and Molecular Biology at the University of Granada in Spain, who was among the scientists who first identified, during the 1980s, the essentiality of this category of nutrients for infants.

Cutting a long story short, here’s the rub: it’s not just babies who need nucleotides, it’s all of us, yet so few have even heard about them! The more we understand about the roles nucleotides play - particularly in areas of the body with rapid cellular turnover rates, most notably the gut mucosa, the gut microbiome and the immune system - the more we realise that nucleotides may not just be ‘conditionally essential’, but essential for most of us, most of the time. Our high stress levels, including exercise-induced stress, along with our ever-decreasing nucleotide intake from food sources in the Western diet, and even trauma and injury, will all contribute to dramatically increasing our dietary requirement for these nutrients. In fact, based on the plethora of properties and activities of nucleotides, ranging from their role in generating new cells, DNA repair, gut mucosal repair and immune function, to name but a few, I’m convinced it’s just a matter of time before this category is generally regarded as ‘essential’ to all human life stages, and not just infants.

Yet, the proportion of the population which understands the importance of dietary nucleotides—and that includes those in the healthcare professions as well—is miniscule! Nearly everyone with an interest in health understands the importance of macronutrients, including proteins and their composite amino acids, fats (along with healthy essential fatty acids) and carbohydrates (especially complex ones from plant-source foods). In terms of micronutrients, we’re all familiar with vitamins and minerals and more are becoming aware of the vital role played by plant compounds (phytonutrients) that act as anti-inflammatory agents, antioxidants (free radical scavengers) and also help modulate a wide range of key metabolic processes in all our body systems (e.g. endocrine, immune, cardiovascular, musculo-skeletal, brain/nervous system, dermis [skin, hair, nails]).

But who’s ready accept to another, whole category of nutrient, namely nucleotides? I believe any person who’s spent time digesting (pun intended) the science around these nutrients will be convinced. And it’s why we feel it’s so important to get the word out far and wide.

For those who want some more detailed and scientific information about dietary nucleotides for humans, please go to the website nucleotides4health.org, an information site on nucleotides that I’ve helped assemble, together with several other scientists. What I provide below is a basic topline outline.

The ground work for nucleotide supplements for humans has been carried out on farm animals (notably pigs and chickens) and in fish farming, where nucleotides have been used to enhance growth and reduce or even eliminate the need for antibiotics, such is the power of their immune modulating effect. Detail of how nucleotide supplements in animal feed have developed is provided in an illuminating article by Dr Klaus Hoffman of Chemoforma (Pro Bio AG) in Switzerland, the world’s leading manufacturer of purified nucleotides for use in animals and humans.

Nucleotides are ubiquitous, low molecular weight, intracellular compounds that are best known as the key structural components of the ‘molecule of life’, deoxyribonucleic acid, or DNA, as well as the closely related ribonucleic acid (RNA), which performs critical functions in coding, decoding, regulation and expression of genes. Find out more.

Nucleotides are comprised of a nitrogenous base (= nucleobase), a pentose sugar (ribose or deoxyribose) and one to three phosphate groups. In DNA’s double helix structure, two nucleobases are loosely bonded by hydrogen to form the steps in DNA’s ladder, while the pentose-phosphate molecules form the backbone of the spiral.

It is clear that the requirement for nucleotides will depend on the rate of requirement of new cells. Cellular proliferation will be greatest at times of rapid growth and development, but even in adults there are particular times where proliferation rates exceed those associated with normal metabolism. The immune system, for example, especially when reacting to infection, can dramatically ramp up output of specialist defence cells such as neutrophils. But it’s the intestinal tract that has the highest rate of cellular turnover in the body, this rate being greater during periods of infection or when the gut mucosa has been damaged and is in need of repair. Additionally, the 100 trillion or so microbes that make up the gut’s microbiome turn over even more rapidly, and have an insatiable requirement for nucleotides to build RNA and DNA within the nucleus of every new cell. There is approximately one thousand times more RNA in a typical cell than DNA, most of it present as messenger (mRNA), transfer (tRNA) and ribosomal (rRNA) RNA, with the all important mRNA comprising usually around just 1-5% of total cellular RNA.

The question is: can the body produce or salvage the necessary nucleotide building blocks to produce all these new cells, even when demand is at its highest? Extensive research has revealed that the body can synthesise new nucleotides, as well as being able to salvage ‘spare parts’ to allow the production of vital DNA and RNA for each cell. These two pathways are referred to, respectively, as de novo synthesis and salvage pathways.

However, it has also become apparent that there is a third and critically important way in which nucleotides are supplied to the cells of our bodies. This is from exogenous sources—through the diet. During periods of greatest cellular proliferation, and during recovery, it seems de novo and salvage pathways are unable to yield sufficient nucleotides for the body’s requirement. The two endogenous pathways are also costly in metabolic energy terms, so ensuring adequate dietary intake of nucleotides in the low gram range is particularly important when the body’s resources are already under pressure.

While we might now think of nucleotides as a ‘new’ micronutrient group, the reality is they are fundamental to life, and could have been the first organic molecules to arise on Earth to form self-replicating molecules that are the basis of life.

Where do dietary nucleotides come from?

The short answer is, from a lot of foods that most of us eat very little of these days. The richest sources are offal meats, yeast extracts and fermented foods such as traditionally fermented tofu, tempeh and natto (Fig. 2). Most plant foods contain very low levels of nucleotides (Fig. 2). 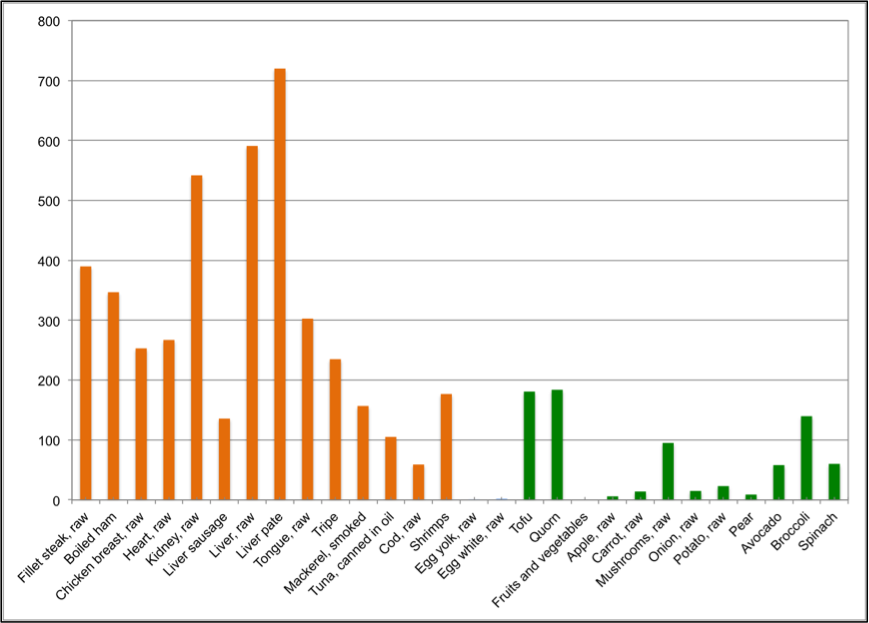 How much do we need?

The EU directive on infant formulae (Directive 2006/141/EC) states that a maximum intake of 5 specific nucleotides for a one month old baby should not exceed 7.25 mg/100kcal. Given the energy intake of an infant, that means that the daily intake will typically not exceed 10 mg. These data are based on studies of nucleotides in breast milk and have nothing at all to do with safety. The addition of nucleotides to infant formulae over the last decade or so is one nod by the infant formula companies to making their breast milk substitute formulae more like breast milk (formula is still a considerably inferior food for infants, but that’s another story!)

When it comes to adults, it has been well established that a safe level of intake even for the purine nucleotides (extremely high intake levels of which may lead to gout in hyperuricaemia or gout in susceptible individuals) is 33 mg per kilogram body weight. Bear in mind there is a large safety factor here, and this safe level is a ‘no observable adverse effect level’ (NOAEL) so there is no evidence of any adverse effects, even in the most susceptible individuals.

In fact, if you evaluate our ancestral diets, it’s not at all difficult to find levels of 50 mg/kg body weight or more.

Based on years of clinical experience, as well as from their use in animal feed, a total dietary intake that equates to around 25-50 mg/kg body. For most of us, this will require a supplementary intake of at least 750 mg balanced nucleotides from a good quality supplement.

Those likely to benefit the most from supplementary nucleotides are:

Can you help us get the word out about dietary nucleotides, the ‘new’—yet probably the oldest—category of micronutrients?

Endnote: As far as I am aware, the only manufacturer producing a balanced formulation of purified, pyrimidine-dominant nucleotides is ProBio AG (Switzerland) which markets its products through Nutritide Nutrition in Europe and in the USA through DSS Global and IBSAid