With the mega-merger under scrutiny, is dumping of GM crops on developing countries the underlying game plan?

You’ll recall last September’s announcement about Bayer’s proposed merger with Monsanto, variously named as “the world’s most evil corporation”, the “third-most- hated company in America” and similar. Others, especially people close to the deal, are more likely to describe the coming together as saintly. Mooted at $66 billion, it would become the largest merger yet.

Since the announcement, there’s been little in the way of news about Monsanto. Are the parties so deep in negotiations that they can barely lift their heads to breathe fresh air? That’s not improbable given their commentary on it on their Advancing Together website. Is the idea to distance Monsanto and its name from its troubled public relations history? Or will it be business as usual once the acquisition is through, assuming it’s not derailed? We investigate.

The entire platform for getting GMO crops approved by regulatory authorities is down to acceptance of one fundamental notion, one that used to be called “substantial equivalence”. The term is now less used following its renaming by the European Food Safety Authority (EFSA) to “comparative safety assessment”. The intent is the same: is the GM crop compositionally the same, or different, from its un-modified counterpart? In the real world, this means doing assessments that compare differences. These studies that are built into the regulatory assessments compare chemical differences and non-target organism effects, among other things, in semi-field or field trials between GM and non-GM crops.

Nearly all of the approvals are of course for just two traits, one that makes the crop resistant to glyphosate (Roundup) so the weedkiller can be used liberally, the other to insects through its production of the Bt toxin.

Big Biotech has over the last 20 years driven the agenda of how regulators assess GM crops. The deception and abuse of science used along the way is one of the greatest yet-to-be-universally-accepted scientific scandals of our time. We suggest you read the detailed submission by GMWatch’s Claire Robinson to the Monsanto Tribunal in October 2016 to understand how twisted and deceptive Monsanto and its ilk, along with government registration authorities like the US FDA and the EU’s EFSA, have been along the way. Monsanto and co with their accomplices in government have consistently relied on studies that show no substantial differences, these studies being at odds with those by the few independent scientists that have raised sufficient funds to undertake comparative studies.

This point is driven home by a key study published last November in none other than one of the world’s most authoritative scientific journals, Nature. The meticulous proteomic study funded by the Sustainable Food Alliance, headed by Dr Michael Antoniou of King’s College London but involving a multi-country collaboration including Professor Gilles-Eric Séralini from the University of Caen in France, revealed “deep alterations in the proteome and metabolome profiles of this crop and results in marked metabolic changes.“ The authors concluded that Roundup resistant maize (NK603) is not “compositionally equivalent” or “substantially equivalent” to its non-GM, isogenic counterpart.

This study alone, even without consideration of other findings, should result in all GM licenses for Roundup Ready crops being revoked around the world. The politics and control of the food supply of course doesn’t work this way. That means GMO awareness is key, the job being to help large numbers of individuals around the world to avoid consuming (or using) products derived from GM-fed animals and eating or using GM crops directly.

Without mandatory and meaningful GM labelling, of course, this is much harder and explains why Big Biotech has fought so hard in the USA to avoid it and last year’s rubber stamping pays little more than lip service to the issue.

It took the world over two decades to come to its senses after the alarm was first rung by Rachel Carson in 1963 that agricultural pesticides like DDT were having a devastating effect on the environment. As it happens, my campaigning background started when I was in my 20s in Australia when I played a leading role in ridding Australia of DDT’s relatives used both in agriculture and against urban pests such as termites.

Big Ag used the oldest trick in the book. It decided once it knew that it could no longer defend the use of these pesticides, it would dump them on people who might not be, at that point in time, as concerned. This started the process of ‘pesticide dumping’ that was synonymous with the roll-out of the Green Revolution during the last 4 decades of the 20th century.

Only quite recently has the devastating impact of these Western, technological ‘fixes’ been apparent. Millions of hectares of smallholder farming land in developing countries are now poisoned with pesticides, soils have been denuded of vital microbial life and human and environmental effects are becoming ever more apparent.

As the Western world becomes less tolerant of GMOs, as the EU looks set to ban glyphosate, and it becomes increasingly apparent that approvals by government authorities have only been achieved through non-transparent deceit and manipulation, will this happen with GMOs?

Assuming the merger goes ahead, will Monsanto, whose reputation is mud in many parts of the world, be able to hide behind the very large mass of Bayer that has for many years been the largest agrochemical company on the planet? And what about Bayer’s own track record, that spans from its role as manufacturer of Zyklon B used in the gas chambers during the Holocaust, through to the neonicotinoids that have in recent years devastated bee populations.

You see, pesticides, other agrochemicals and seeds go hand in hand and whoever controls them, controls the food supply. From this perspective, we’re already in grave trouble.

In its 2008 report “Who Owns Nature”, the ETC group reminded us that:

It’s becoming increasingly clear that Monsanto and Bayer have already switched their gaze away from the troubled waters of the industrialised world to sub-Saharan Africa and Asia, where the world will experience its biggest population growth in the coming years.

In a characteristically polished interview with the Wall Street Journal last October (see below) Mike Frank, senior vice president and CCO of Monsanto, made clear that Monsanto is excited by the GM crop approvals received over the last 18 months in Vietnam, Kenya, Malawi and Nigeria. What Mr Frank fails to make comment on is that the majority of the 54 sub-Saharan African countries have been historically highly resistant to accepting GM crops.

As the IAASTD (International Assessment of Agricultural Knowledge, Science and Technology for Development) report of 2008 showed after 5 years of collaborative work with 400 scientists from 60 countries under the banner of the United Nations, this was primarily down to concerns about the excessive concentration of corporate control over agricultural resources by companies like Monsanto. Big Biotech of course has a different explanation, preferring to suggest that opposition in developing countries has been down to misplaced influence by European and European-funded NGOs, which have in turn manipulated foreign aid and trade against GM crops. You may wish to ponder over who is doing the real manipulating….

Mike Frank, senior vice president and CCO of Monsanto, explains why he believes the world isn't ready to move away from genetically modified foods regardless of the large movement towards more organic foods. He spoke with WSJ's Joanna Chung at the WSJ Global Food Forum in New York (October 2016).

The figures showing growth of GM crop areas globally since the first commercial crop was introduced in 1996 don’t lie. The graph below, courtesy of the Information Technology & Innovation Foundation (Feb 2016), shows a plateauing of GM use in industrial (Western) countries, and a clear increase in the developing world. That is the unmistakable hallmark of GMO dumping. Without a greater level of public opposition to GMO, a more balanced interpretation of existing scientific data, investment in new relevant research, and a political will that stems from doing right by the people rather than by the corporations, AgriBiotech giants like Bayer/Monsanto will continue to wreak havoc to the detriment of human health, the environment and the economic independence of farmers and local communities.

What is essential is that we learn our lessons from the era of pesticide dumping, an issue that is itself far from resolved. The dumping of GMO crops and associated pesticides, the usage of which will increase as superweeds and superbugs increasingly outwit the genetic traits owned by Monsanto et al, can only cause yet more harm. 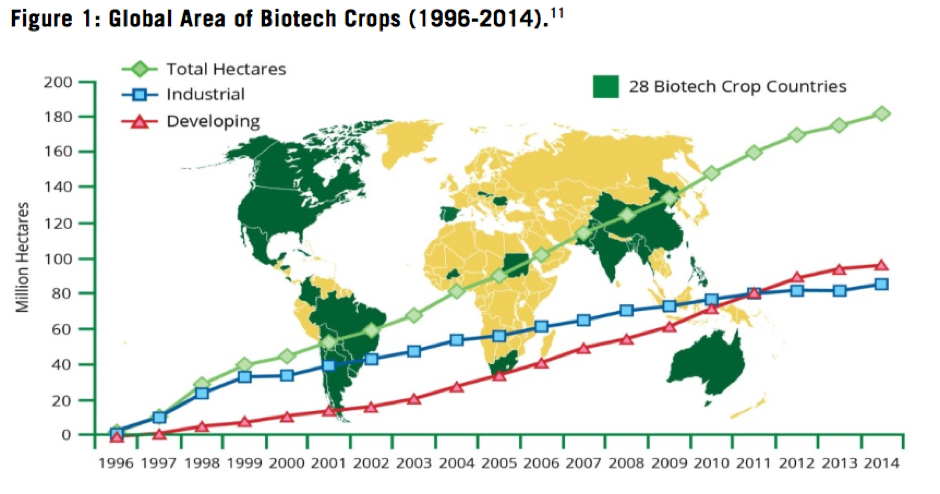 A successful Monsanto/Bayer merger would concentrate the control of agricultural resources even further with the merged entity becoming the single largest agrochemical, seed and GM crop conglomerate in the world. Global agricultural biotechnology competitors would reduce from six to four in number, with consequent anti-trust risks and potential price hikes for consumers and farmers.