It’s official: HPV vaccine, the most dangerous vaccine yet

Anyone daring to suggest that a vaccine might present a risk, especially to children as the most vulnerable members of our society, are usually shot down in flames. Health authorities have tried their best to continue telling everyone that HPV vaccines (note use of plural as there are three different types available) are safe, despite ongoing research suggesting otherwise.

A study just released by a World Health Organization (WHO) monitoring centre in Sweden shows that adverse event reports received from national authorities — and these will represent only a fraction of those actually experienced — show a tendency to produce clusters of serious adverse events that include complex regional pain syndrome (CRPS), postural orthostatic tachycardia syndrome (POTS) and chronic fatigue syndrome (CFS) that exceeds any other vaccine.

GMO vaccine released a decade ago

The genetically engineered vaccine, first introduced for mass vaccination around 10 years ago, has been delivered to around 80 million girls, women and, in some countries, boys.

By August 2014 58 countries had introduced the vaccine into their immunisation schedules. According to the WHO, 80% of all cases of cervical cancer are linked to HPV, the key justification for giving the vaccine to young girls, occur in developing countries and are linked to sexual encounters at very young ages.

Concerns around the safety of the vaccine began to arise in 2013 with reports of CRPS in Japan, POTS in Denmark and CFS in Holland.

This study, which explores global reporting patterns of Adverse Reactions (AEs) for HPV vaccines shows that these different types of effects are often clustered, i.e. they are more likely to occur together, and so are likely related.

The study looked at case safety reports for HPV Vaccine in VigiBase, the WHO International database of suspected adverse drug reactions. Reports are received from pharmacovigilance centres in 124 countries who participate in the WHO Programme for International Drug Monitoring up to 1st January 2015. Cases including at least 2 reporting terms were included in the study.

Analysis of data revealed a large number of reports with a pattern of AEs including headache, dizziness, fatigue and syncope (temporary loss of consciousness). Reporting of AEs has taken place since the introduction of the vaccine and increased substantially in 2013 and 2014. 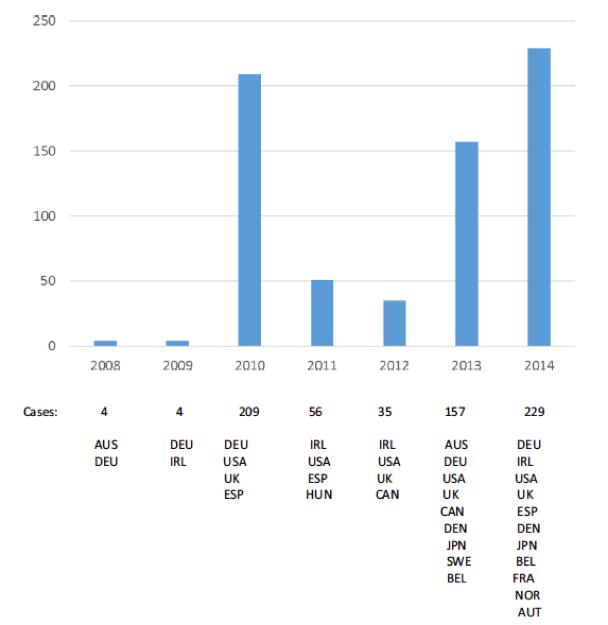 Figure 1. Timeline displaying the number of case reports (per year and by country of origin) that were included in the four clusters. Source: Chandler et al. Drug Saf (2017) 40:81–90.

Researchers used cluster analysis to look at 39,953 HPV safety reports from VigiBase, which were used in the Study. The reports were sorted into 4,116 clusters with 54 clusters containing 5 or more AE reports. The four largest clusters included 71% (28,502) of the safety reports analysed, which reported AE's included on the product label. On average the reports in these clusters only included a few AE terms (3-4), which were generally classified as non-serious.

Review of the smaller clusters included cases related to conditions such as cervical dysplasia (precancerous condition of the cervix), mononucleosis (high fever, swollen lymph glands, and a sore throat) and systemic lupus erythematosus (an autoimmune disease).

Four smaller clusters were found to include terms related to ongoing safety concerns. The most commonly reported AE's were headache, dizziness, fatigue and syncope. In more than 50% of the reports 3 out of the 4 most common AE's were reported. Compared with overall HPV reporting, these clusters included a higher proportion of serious cases (44-89% compared to 24%). Three of these smaller clusters contained a significant proportion of reports relating to POTS (58% - 61/106), CRPS (20% - 15/76) and CFS (37% - 32/87), although these terms were only reported in a small proportion of the total cases included (15% of 694 reports). 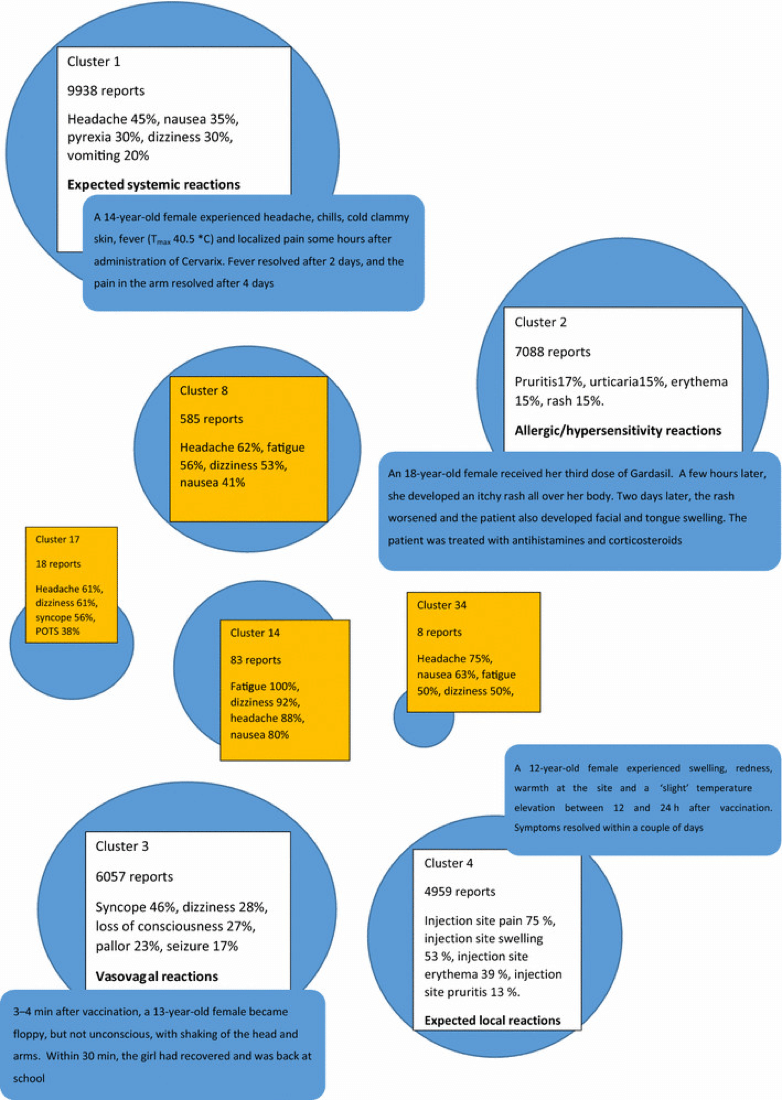 Further analysis found consistency between the clusters in terms of less commonly reported AEs (such as nausea, muscular weakness, disturbances in attention), diagnostic procedure terms and impact on life including impairment to daily activities, reduction in quality of life and being bedridden. The majority of the cases (77.5% of 694) included in these four clusters were considered relevant to ongoing safety concerns around this vaccine.

The study was limited by the lack of information included in many of the reports in VigiBase, making it difficult to decide on clinical relevancy of reports.

The reported AE's in the clusters were found to be very similar to others described in a number of other safety signals for the HPV vaccines from The Netherlands, Denmark, Japan, US, Mexico and Italy. Commonly reported AEs included fatigue, headache, dizziness, nausea and musculoskeletal discomfort. More serious conditions such as CRPS and POTS and paraesthesia were also found. The number of cases showing similar patterns of AEs across a variety of geographical regions add weight to the overall concerns around the safety of these particular vaccines.

No cause and effect?

As would be expected, the study’s authors comment that the AEs in VigiBase would represent underreporting and there would likely be both undiagnosed and unreported cases of AEs that have not found their way to national authorities and so into VigiBase.

Many studies to date have looked at specific terms in relation to AEs following vaccination with the HPV vaccine, but they did not consider co-reported events in the way this study has.

The cluster analysis used in this study has revealed AEs reported following HPV vaccination that are serious and which overlap in signs and symptoms to recent safety signals for POTS, CRPS and CFS, but that haven't been diagnosed as such.

The pro-vaccine lobby will almost certainly celebrate the author’s statements that the study does not establish any proven causal association between these AEs and HPV vaccination. That is of course no surprise, as it’s merely a cluster analysis of reported AEs and so was not of a design that could establish a cause and effect relationship. Given the nature of the reports, it’s almost inconceivable that most of the nearly 40,000 cases received weren’t related to the vaccines.

This study makes it ever harder for vaccine makers, health authorities, doctors or other health professionals to claim the “safety” of the vaccines – without any qualification. The fact is, serious adverse effects are a real possibility and they may result in weeks, months, years or potentially even permanent effects that can dramatically alter a person’s quality of life.

What should we do now?

We uphold the following:

Health authorities and professionals who vaccinate have a moral if not legal duty to make parents, carers and children fully aware of these known risks, appreciating that known adverse events almost certainly represent only a fraction of those because of lack of adequate diagnosis and under-reporting.

It is also imperative that parents, carers and children are given advice as to what other options are available to minimize the risk of HPV transmission, this centrally being related to avoiding unprotected sexual encounters, especially when under the age of 14.

For more information on HPV and other vaccines, go to our Vaccine Choice campaign page. 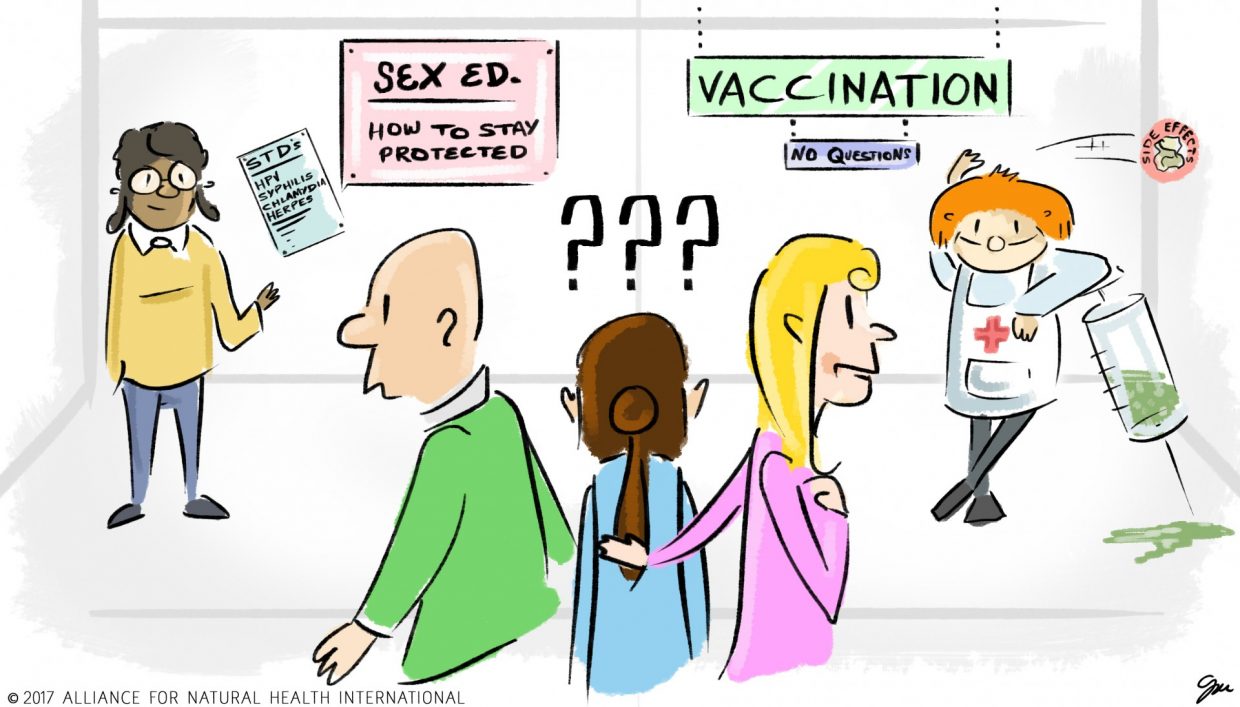