An important paper just published by a team at Keele University and Kings College Hospital, London, including aluminium toxicity expert, Prof Chris Exley, provides more evidence for a possible link between autism and aluminium. Autism is a highly complex developmental disorder that almost certainly has multiple origins, causes and triggers. While a growing body of evidence suggests underlying genetic predisposition, it appears increasingly likely that environmental triggers are centrally involved.

There is, for example, increasingly compelling evidence for a link between specific periods of exposure of mothers to ambient airborne pollution, supporting the observation that prevalence is greater in cities than rural areas.

Other evidence that environmental insults are involved at critical life stages comes from extensive work on prenatal exposure to valproate, a drug widely used to treat epilepsy and bipolar disorder.

If there is any kind of consensus developing, it is one related to a complex range of polygenetic (multi-gene) and environmental interactions, hence the emerging view of the condition being epigenetic in nature.

Aluminium as a potential trigger

The Keele and Kings College team had only a limited amount of donor brain tissue to work with and it came from just 5 donors, aged 15 to 50. But what they found was extraordinary: every single one of the tiny samples from the brains from the 5 individuals with an autism spectrum disorder (ASD) diagnosis had extremely high levels of aluminium present, among the highest ever recorded in a human brain. One sample from the occipital lobe of the 15-year-old donor contained 22 mcg/g dry weight and three samples from the same lobe averaged 7 mcg/g. Levels above 3 mcg/g (dry weight) are thought to be pathologically significant and levels of the order found have only previously been found in a 42-year-old patient with familial Alzheimer’s disease, a condition which has also been associated with aluminium.

More than this, the aluminium was found in neuronal as well as non-neuronal cells like the microglia, small neuroglial cells of the central nervous system that are known to become phagocytic (specialised cells that engulf and ingest other cells or particles) in areas of neural damage or inflammation. As a nerve poison and excitotoxin, aluminium damages nerves and causes inflammation. Aluminium adjuvants in vaccines have been shown to persist in the body, be transported in lymph and accumulate in immune cells.

Since 2005, it has been known that a neuroinflammatory process involving the microglia is likely to be a key factor in the development of autism.

Autism was first described as a medical condition in 1943 by the Austrian-American child psychiatrist, Dr Leo Kanner, at the Johns Hopkins Hospital. Kanner is widely viewed as one of the most influential American child psychiatrists in the twentieth century and he hadn’t encountered the condition in his career before meeting his first patient in 1938. By 1943 had had found another 10 children with strikingly similar symptoms, triggering the publication of his seminal 1943 paper. A year later, unknown to Kanner, a Vienna-based, Austrian paediatrician and medical theorist, a certain Johan ‘Hans’ Asperger, published the first paper describing Asperger’s syndrome. Autism and Asperger’s are of course now seen as being part of a continuum of conditions described as Autism Spectrum Disorder or ASD.

By the 1980s autism was reported to affect 1 in 10,000 children. A sudden inflection in the incidence rate in around 1990 brings us to today’s ‘epidemic’. In the US, that’s around one in every 42 boys and 189 girls, giving an average of one in every 68 children. The figures are similar in Europe, and higher still in Japan. The common trend is for prevalence to be greater in more developed countries.

No consensus on causes of autism epidemic

Less than a hundred years ago the condition was undescribed. Today, by contrast, it’s threatening one in 40 or so males and around five times fewer girls. The combined impact among both genders, including the loss of labour and the requirement to care for autists, coupled with the likely continued progression of the trend is set to destabilise the entire fabric of human society – as well as its economic base. 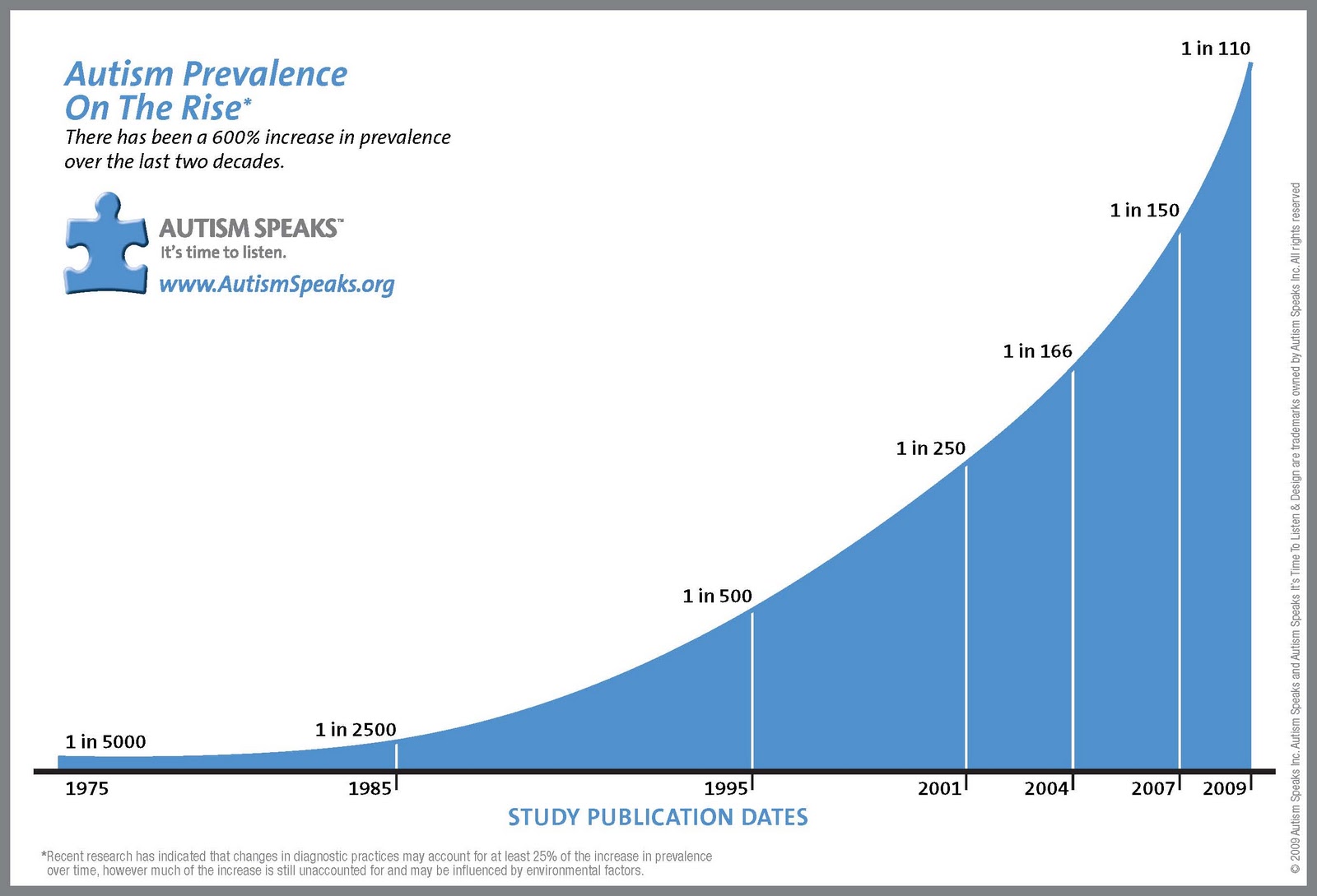 The dramatic increase in autism prevalence based on study publication dates.

With so much scientific uncertainty, and such severe consequences, we see it now as downright foolish, as well as being deeply unethical, for industry and governments to not work together as a matter of urgency to reduce public exposure to proven neurological toxins that might contribute to the autism epidemic. The future of so-called ‘civilised’ human society depends on it.

Aluminium has to be very high on the list of substances to which exposure should be minimised. This is because there is no evidence of any human nutritional need for the metal and it has a proven role in immune activation (that’s why it is added to vaccines), neuroinflammation and neurological insult and emerging evidence of an association with a wide range of incredibly common and serious neurological conditions, including autism.

In a paper published in late 2016, a French group showed that the neurological effects of low doses of aluminium, where small agglomerates of metal particles may be readily transported in lymph, might be even more severe than with high doses. The authors suggest that with high dosages, aluminium passage into the bloodstream might be impeded to a greater extent by the formation of vaccine-related granulomas (subcutaneous nodules).

To find out more about the science of aluminium and its potential role in immune activation and neurological insult, go to the Vaccine Papers website.

For a list of excipients in US vaccines, including those containing aluminium (search for the term ‘aluminum’ using US spelling) via the CDC vaccine ingredients listing. Aluminium, present as an adjuvant to specifically trigger a stronger immune response, is present in 24 different vaccines listed.

According to the Vaccine Knowledge Project at Oxford University, aluminium is present in the following vaccines used in the UK:

Find out more at our Vaccine Choice campaign.