On conspiracy theories – and vaccination

Getting inside the mind of a skeptic, with a little help from Jerome Burne

‘Conspiracy theory’ is defined as:

“A theory that explains an event as being the result of a plot by a covert group or organization; a belief that a particular unexplained event was caused by such a group.”

When you dissect the definition, you’ll discover that a multitude of events inflicted on the populace at large have, at some time or another been labelled as conspiracy theories. Take, for example, Guy Fawkes’ plot to blow up the British Houses of Parliament, Hitler’s invasion of Poland, the CIA spying on the US press corps in Operation Mockingbird, the Bilderberg group’s role in shaping a ‘new world order’, or MI5’s fake reports on WMDs (Weapons of Mass Destruction) as exposed in the Chilcot report. The list goes on. Prior to these conspiracies being outed, anyone with any bean of evidence for any of these events would have been labelled as a conspiracy theorist. That wouldn’t make them wrong.

Once the plots are exposed, the theory dissipates, being replaced by fact. And the conspiracy – the action of a few – simply becomes a record in history, very rarely being referred to again as a conspiracy. In that sense, we must recognise that any so-called ‘conspiracy theory’ will always be subject to criticism by the establishment or the less informed majority. If it is eventually exposed, it becomes another line in history — and generally, those who suspected the conspiracy prior to its public exposure are rapidly forgotten. Sometimes they’re remembered as whistleblowers.

With this understanding, it’s worth taking a closer look at what those who wish to attack natural medicine are saying. Science has become the new religion. So, apparently, it is to the Western scientific method (as varied as that might be in its practice) that we must all bow and take our cues, regardless of our culture or background.

Enter, the skeptics. At ANH-Intl we would dearly love to call ourselves skeptics but sadly the term has been usurped by – wait for it – the skeptics. Time for another definition. Skeptic can be defined as follows:

“A person who questions the validity or authenticity of something purporting to be factual.”

It’s actually the best place to be coming from in science. Develop your null hypothesis, test it, and depending on the result of your experiment or trial, move to the next hypothesis – or theory. Theory, test, prove, disprove – repeat ad libitum. That’s the procedure used in Western science and it’s got us a long way. It has its shortcomings too, but more on that another time — this is no place to digress.

Well, the UK skeptics have a new fresh face with which to attack natural medicine. His name is David Robert Grimes. He’s young, he’s hip, he’s got cool hair, he’s Irish and he’s based at Oxford. He’s a physicist by trade, just like the leading UK skeptic knights, Brian Cox and Simon Singh. He’s also, apparently, a self-confessed ‘opinionated git’. He’s already received an accolade from the older, establishment skeptics in the form of an award. He has, it seems, taken on those with conspiratorial beliefs, emerged ready to fight another day — and been warmly welcomed into the skeptic bosom.

In the UK, Dr Grimes is the new face attacking those who might dare to question vaccine safety. Given his role as a publicist for the status quo, we thought it appropriate to ask Jerome Burne for an opinion on his paper that attempts to cement anyone with vaccine safety concerns into a conspiracy theorist camp, alongside those who believe in fake moon landings or a climate change hoax. Among the important points that Jerome makes are that cover-ups over drug safety go on for many more years than might be predicted by a model like Grimes’ (e.g. statins, Seroxat, Paxil, etc).

The view of a journalist

Postgraduate physicist David Robert Grimes is clearly lining himself up as the go-to expert on science and medicine – bit of a discipline leap. But, Hey! – in these days of academic silos it is surely good to see people crossing boundaries.

Well yes, but irritatingly, Dr Grimes’ forays into nutrition (it’s a “pernicious myth” that the ketogenic diet could benefit cancer in any way) and more recently vaccines (criticising them makes you a believer in an anti-vaccine, anti-science conspiracy), are about as informed and helpful as my saloon bar musings about dark matter would be.

Grimes has come up with a mathematical yardstick that can tell you how likely they are to be true. Despite its cherry picking and bizarre assumptions, it has been recently been published in PLoS One . Its purpose, he writes, is to "help counteract potentially damaging anti-science beliefs by giving an estimate of viability for a conspiracy over time." In other words by their nature conspiracies rarely last long.

Among the ones he mentions is the vaccine conspiracy. This is the belief - common among parents of a child who has had some sort of damaging physical event after being vaccinated, usually with MMR – that the authorities know about the autism risk but have colluded in covering it up. Even though experts explain there is no risk, parents often persist in their belief.

So the aim of Grime’s mathematical formula is to show reason-resistant parents among others, how such a conspiracy is very unlikely because it couldn’t possibly last long. This is where the bizarre assumptions come in.

The first is that hiding information about the dangerous side effects of a drug is inherently unlikely because it would involve so many people details would rapidly leak out. But it isn’t. It happens all the time! There are books and stacks of journal articles about it, so why is it highly unlikely that companies would hide details of possible dangers of very profitable vaccines?

Another assumption is that if a whistle-blower reveals details of a conspiracy it would immediately collapse. Ironically that is exactly what the latest documentary Vaxxed does. In it a top scientist at the federal agency that oversees vaccines, The Centers for Disease Control and Prevention (CDC), describes how he fudged figures from trials to make a link between MMR and autism go away.

But the data was made public in 2014 and it has made no difference to the official line, nor has it triggered an investigation. A plausible interpretation is that there is a conspiracy and powerful interests are determined to protect it.

Either way it suggests Grimes’ formula is of little use in determining the truth.

Before we hand you over to audio-visual presentation of some facts, there a few points we’d like to make about Dr Grimes’ model, some re-iterating Jerome’s views:

Check out our video to find out why.

Now, please consider our petition, and please sign it if you think governments and health authorities should stop telling the public that vaccines are safe.

Key data showing deaths and injuries related to vaccination from the video is shown below: 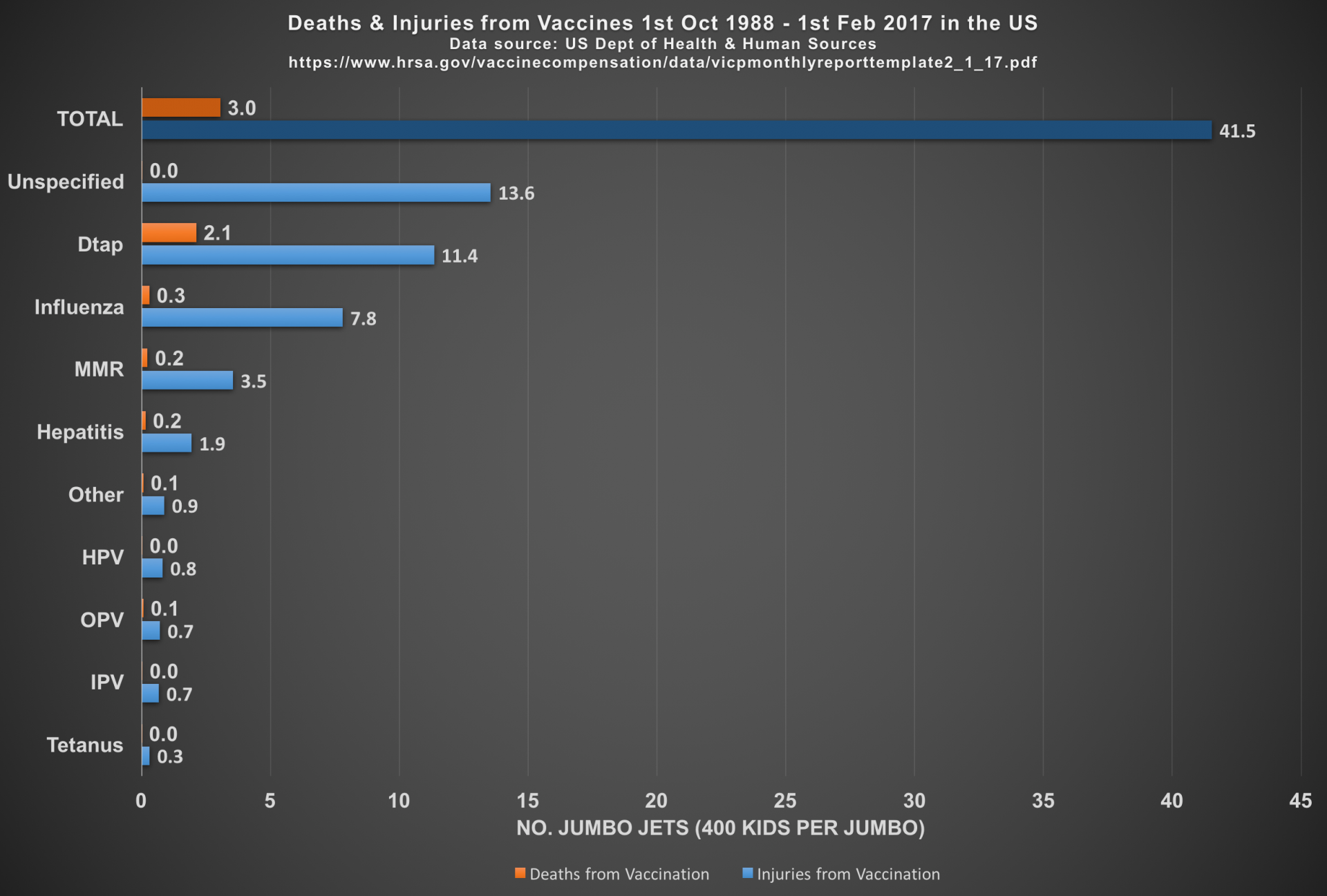