GMO wars in Luxembourg and Strasbourg

Last week the European Court may have lessened the obstacle course for GM, today Strasbourg throws a big spanner in the EU GMO works

An opinion issued last week by the Court of Justice of the European Union (CJEU) in Luxembourg could make it harder for national authorities to ban GM crops in the EU. The opinion suggests that in addition to urgency, clear evidence of harm should be required for EU national authorities like Italy, France, Germany and Austria to invoke the ‘safeguard clause’ in food and GM law to ban cultivation of GM crops. Exactly how this pans out will of course depend not on the Advocate General’s opinion, but on the final ruling of the Court expected within 2 months. Typically, 80% of rulings end up being in line with the preceding opinion of the Advocate General.

By contrast, earlier today, in an important nod to the democratic process, the European Parliament voted at plenary in Strasbourg to block the European Commission’s legislative proposal to authorise 21 GM crops for use in food and feed that received clearance from EFSA. The same day in the same parliament, Nigel Farage referred to the MEPs as "the mafia" and the European Parliament's lead negotiator referred to Brexit as a "cat fight in the Conservative Party that got out of hand".

Commenting on today’s vote was one of the leaders in the European Parliament challenging Big Biotech’s push in Europe, Belgian MEP Bart Staes, from the Greens/European Free Alliance.

Mr Staes said today, “There is a clear and consistent opposition in the European Parliament against new GM authorisations. MEPs have rejected the European Commission's latest proposal, which would allow imports of up to 20 different varieties, most of which have not even been tested for safety. With member states also unwilling to give these GMOs the green light, the Commission must now accept it does not have political support and withdraw its proposals."

Commenting, Bart Staes added: "These mergers are bad news for farmers, the environment and food security, in a sector which is already extremely concentrated. The Commission surely now has no other choice than to refuse the merger between Bayer and Monsanto to avoid further concentration.

Court of Justice of the European Union, Luxembourg

The Advocate General’s opinion on Case C-111/16 is in turn based on a case in which three Italian gentlemen, Giorgio Fidenato, Leandro Taboga and Luciano Taboga, were criminally charged by the Court of Udine in Italy for planting the insect-resistant strain of Monsanto’s GM maize, MON810 — the only GM crop variety currently cultivated in the EU — in contravention of Italy’s own ban on this variety initiated in 2013. The Court of Udine referred the case to Luxembourg for clarification.

Italy’s ban was itself centred on the application of the ‘safeguard clause’ built into Article 34 of the EU GM Regulation that allows any EU Member State to apply the precautionary principle and ban the sale of a GM crop if it poses a ‘serious risk’ to public health or the environment. 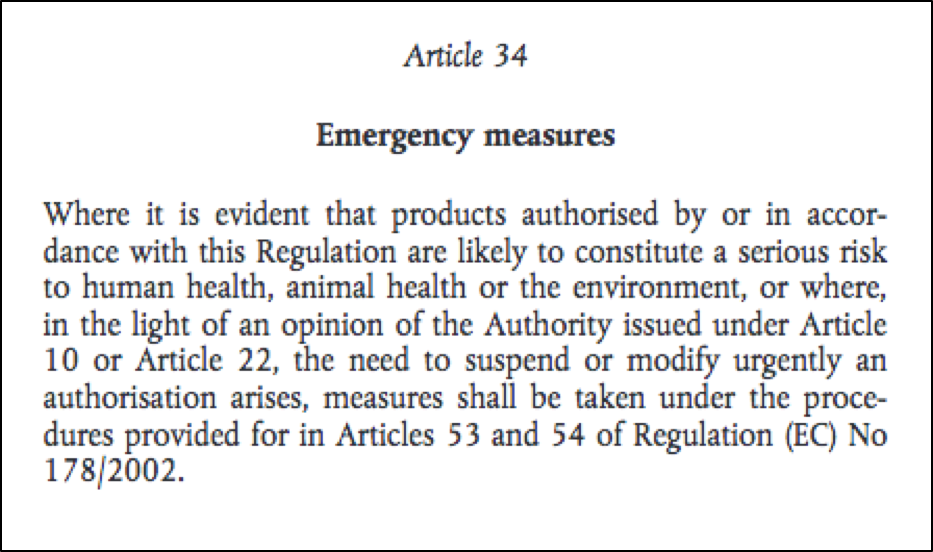 In the recent CJEU opinion, Advocate General Michal Bobek stated that EU member state authorities should invoke the safeguard clause “only if they can establish, in addition to urgency, the existence of a situation which is likely to constitute a clear and serious risk to human health, animal health or the environment.” 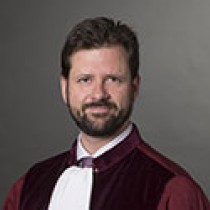 The safeguard clause has of course always been able to be triggered where authorised GM crops “are likely to constitute a serious risk to human health” – this wording being integral to Article 34 itself.

However, if Bobek’s opinion is turned into law, the bar for evidence may be increased significantly. This is because Bobek, through his analysis, has argued that there should be “clear” evidence for a health or environmental effect, as well as "urgency". This would necessitate a reasonable body of evidence and also significant scientific agreement or consensus over this evidence.

Given the revolving doors and biases within both regulatory authorites and Big Biotech, finding consensus over harm may be a lot more difficult under such a lens than has been the case up until now. The EFSA has already twice reviewed the limited, often proprietary data on safety supporting MON810 and has both times concluded that it’s safe for human health and the environment.

What is “clear” evidence of harm?

But in 2015, EFSA’s review of post-market environmental monitoring data, supplied by none other than Monsanto with its perverse track record of bias and cover-ups, showed that MON810 may be harming rove beetles, important predators in any biodiverse, healthy agro-ecosystem. 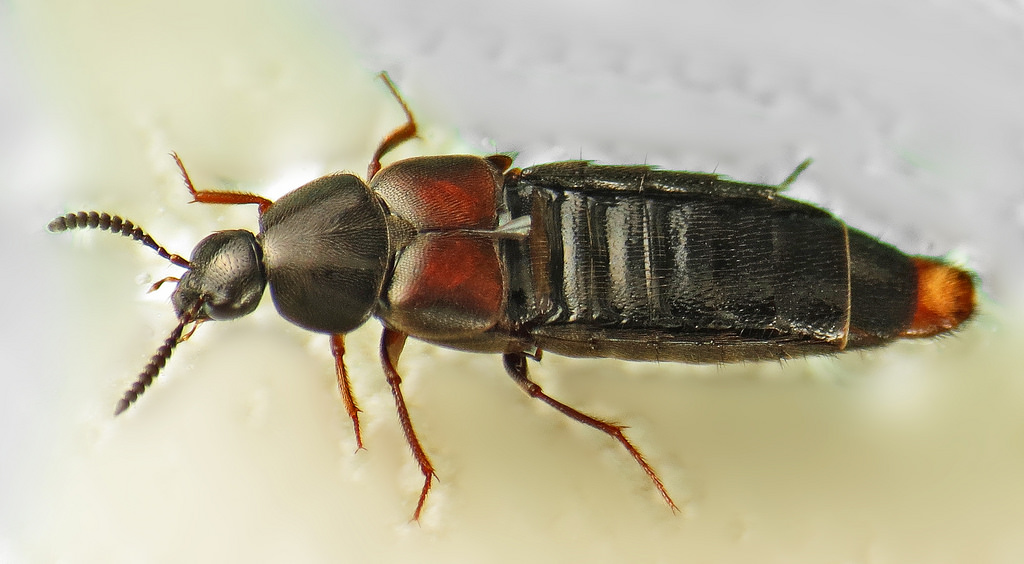 Will the courts be concerned about GM crops harming rove beetles,

If this evidence was “clear” with little uncertainty around it, would it be sufficient if it just involved one group of non-target organisms? Or would you then need to prove that rove beetles were an indispensable part of the agro-ecosystem, scientifically a much bigger ask?

As always, assuming Bobek’s opinon is turned into a ruling this summer, it would depend on case law precedents set following further challenges.

Our grave concern is that EFSA’s lack of independence from the Big Biotech and its track record might make showing "clear" evidence for invoking the safeguard clause more and more difficult.

There’s a widely held view that Europe has been one of the most important blocks on the global roll-out of genetically modified (GM) crops. This may be true but, ultimately, it’s all relative. This view is based on the positions of a small number of generally anti-GM EU member state governments (notably Germany, France, Austria and Italy) and a large sector of the European public vis-a-vie some other parts of the world, especially the USA, Canada, Australia, China, Brazil and other countries, the latter having generally welcomed GMOs with open arms.

Without an effective safeguard clause, wide-scale GM plantings, just like in the USA, Canada and Australia, might become the order of the day in Europe. But it could be even worse: the small farm sizes common in Europe bring with them very different issues when it comes to co-existence between GM and conventional crops, and with cross-contamination of non-GM and organic agriculture.

Our view is that the final ruling, when it’s handed down, needs to be interpreted extremely carefully. If it in any way weakens the safeguard clause, which to-date has been the main legal obstacle to whole-scale GM cultivation, legal challenges should be brought against any refusal to invoke the safeguard clause. The European rove beetle may yet come to our rescue.

Whatever happens may also set the tone for a post-Brexit UK, with a government that has long viewed GM crops, despite an abundance of conflicting evidence, as something of a panacea both for farmers and food security.

Ultimately, it’s European citizens that have represented the biggest point of resistance to accepting GM. Despite a massive pro-GM public relations machine singing the praises of biased studies showing benefit, and ignoring the growing body of research showing risk to health and the environment, citizen support for GMOs has dropped from 72% in 1991, to 28% in 2005 and was more or less stable at 33% in 2010 - according to the three Eurobarometer surveys on the subject.

The safeguard clause has been a key strategy used by those small numbers of governments that are listening to their people. And the European Parliament, as we have seen today, is still playing a crucial part in the democratic process. 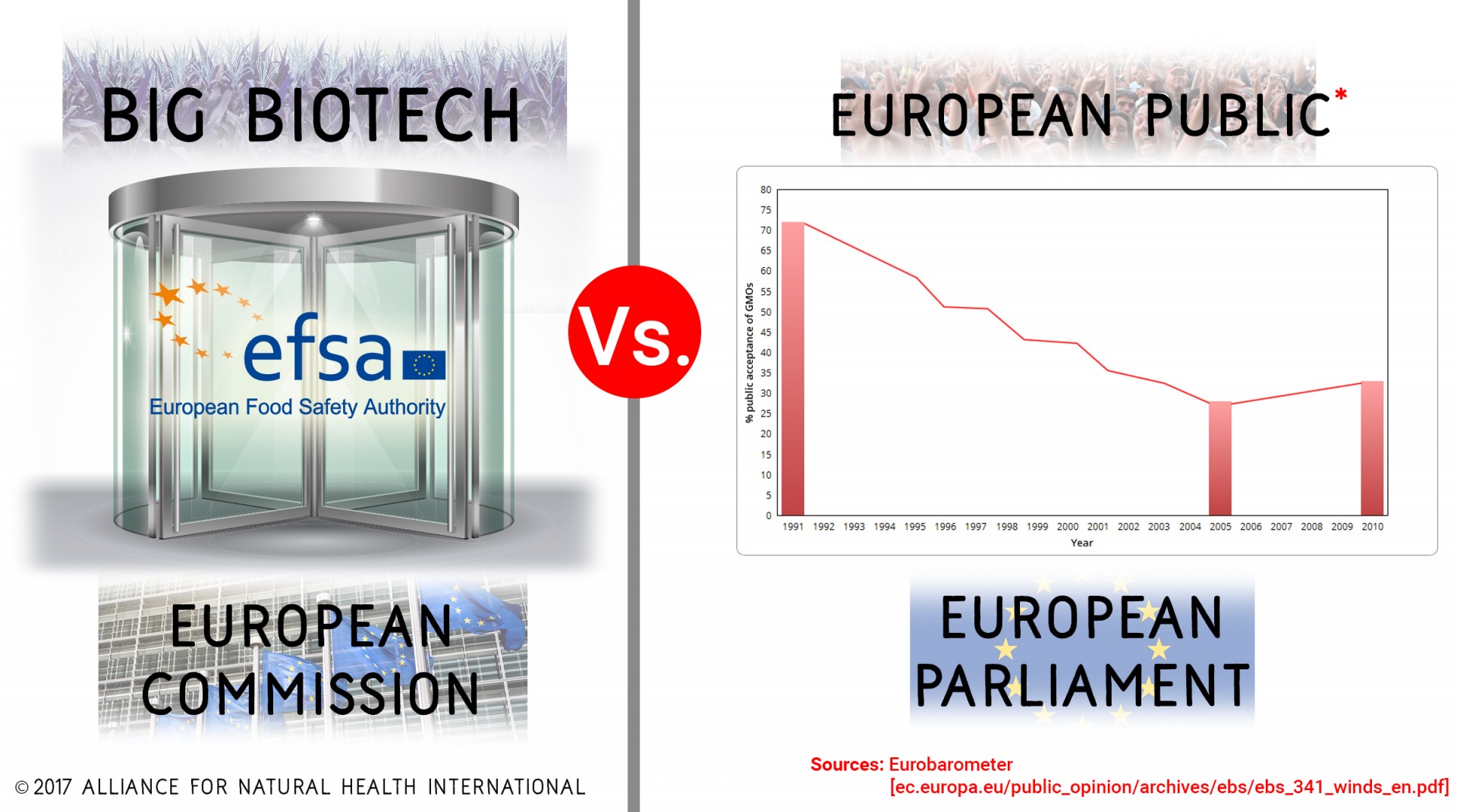 There have been a number of movers and shakers in the European Parliament that made today’s vote possible, including all the rapporteurs. Why not email them and thank them for their work in helping to block the authorisation of 21 GM crops for EU use in food and feed. They are as follows: