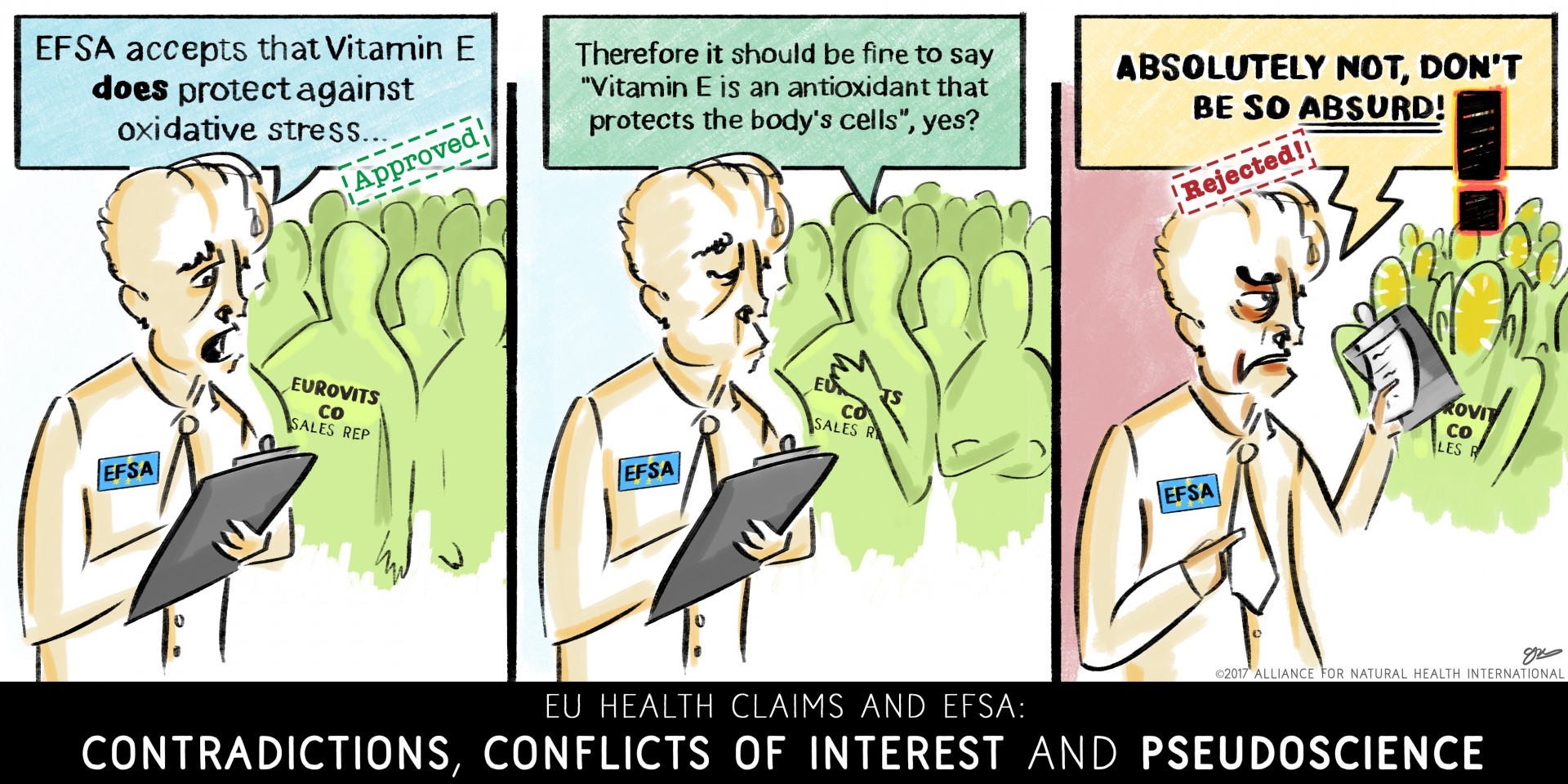 Tell EFSA to quit misleading the public on health claims

Public consultation on the draft guidance for the scientific requirements for health claims related to antioxidants, oxidative damage and cardiovascular health (revision 1)

The European Food Safety Authority (EFSA), recently criticised for having nearly half of its experts with ongoing financial conflicts of interests in the agribusiness and food industries, is asking for your opinion. On 3 September, EFSA closes its consultation on its “draft guidance for the scientific requirements for health claims related to antioxidants, oxidative damage and cardiovascular health”.

Sound like that’s not relevant to you? Well, if you care about what foods, herbal teas and supplements the public chooses and how these impact health, or what eating habits the youngsters of today will take into adulthood – you should have your say. Concealing the remarkable truth about the healing and disease preventing powers of foods and nutrients by rejecting so much nutritional science and triggering the ban of thousands of previously used health claims amounts to the public being misled.

EFSA has called a public consultation and wants to hear from you. It's time to have your say - and this article is about helping you with this important task.

The link to the EFSA’s consultation document is here, while you may also wish to review the consultation page.

If you want to jump straight to our call to action, click here.

Health claims through the EFSA lens

The reality is that of 44,000 claims originally proposed, thanks to negative assessments by EFSA, the vast majority have been made illegal. The majority of these were lost in what we called “the Great EU Health Claims Cull” between 2008 and 2011. These were thrown out because they didn't include human studies to support the cause and effect relationship between the consumption of the food or substance and the claimed beneficial effect, something that wasn't a requirement when the requests for scientific substantiation were issued.

Given the many thousands of beneficial compounds and substances in foods, it is somewhat extraordinary that the highest authority on food safety in the EU – an authority that claims to be both transparent and open – has only found 261 foods or dietary substances that are proven beneficial for human beings. We refer of course to the 261 authorised health claims that can be used by food and supplement businesses EU-wide if they meet their conditions of use. Missing from the register of permitted health claims are all 9 amino acids that are essential to human life – and other absurdities.

This is down to the EFSA’s interpretation of what is required to scientifically substantiate the law, along with the authority’s remit to follow the letter of the law that requires that all claims are supported by “generally accepted scientific evidence”. The study populations must also be healthy, not diseased ones, so as not to tread on drug company interests. That’s about following the status quo, accepting that highly reductionist methodologies based on randomised trials, biomarkers – and healthy populations – are the way to go. That means disregarding decades of research that shows how many foods and nutrients are at least as powerful as drugs.

The net result is that any commercial entity that wants to make a health claim about its product – to tell the consumer what it does – must dance to EFSA’s tune. They can’t rely on past science, they must undertake new studies, expensive studies that by and large only big companies can afford, to buy health claims that might give them a competitive advantage over others who have been silenced because they can’t use any of the 2,000 odd so-called “non-authorised” health claims.

Overall, only 16 health claims have been accepted, split evenly between protection of oxidative damage and DNA – both concepts not every member of the public would likely fully understand as being relevant to their health. Much more disconcerting is the 286 that have been rejected by EFSA. That’s a rejection rate of 95%.

In Table 2, we show you how EFSA’s scientific lens is further distorting and confusing the public. Let’s remember, the legislative history of the EU Nutrition and Health Claims Regulation was all about serving the European public, making sure that it wasn’t fed false, misleading or ambiguous claims. It’s clear the Regulation and its interpretation by EFSA has gone way off the railtracks.

Call to Action: What you should tell EFSA

The big question is this: will EFSA’s draft guidance improve the success rate?

We are not convinced it will – and that it will only benefit a few companies – especially those with deep pockets who can afford to play the new rules of the game - while ignoring decades of research that has until this point built the foundation of public health policy in the field of nutrition. It will further distort the science and in EFSA’s attempt to be the scientific arbiter, public health in the EU will have been done a further major disservice.

Following are some important principles we think need to be communicated to EFSA in its consultation.

The consultation response should be made on the electronic template by 3 September 2017.

Comments should be given to particular sections. ANH-Intl will be making a comprehensive submission by the deadline of 3 September 2017. We wish to argue that a minor tweak to EFSA’s guidance is unacceptable and a sea change in approach is required. The more consultation responses that support this view, the more impact it will have. We therefore outline below some key points relating to the sections on Generic Comments and Antioxidants that can be used in part or in full in your responses to EFSA that should be made using this link.

Download a PDF of our detailed consultation position, which includes the following sections: