Among the biggest controversies in nutrition is how much carbs, fats and protein we should eat. This was a major theme at last week’s Swiss Re event which saw some of the world’s leading researchers in epidemiology debating the subject.

Governments and registered dietitians, such as in the UK, are still telling us to get 50% of the energy from carbohydrates and not more than 35% from fats. But some nutrition experts, including some who are among the most influential in informing government nutrition guidelines, think differently.

Enter Professor Dariush Mozaffarian, the Jean Mayer Professor of Nutrition and Medicine, and Dean of the Friedman School of Nutrition Science Policy at Tufts University. At the Swiss Re and British Medical Journal organised Food for Thought conference in Switzerland last week, Prof Mozaffarian suggested that we stop looking at macronutrient amounts. Instead, he proposed we look at food groups, given that he argues that it is the food quality that is key, not the relative amounts of macronutrients or micronutrients.

This view was upheld despite a large number of the assembled clinicians and scientists, including the likes of Drs Sarah Hallberg, David Unwin, Aseem Malhotra, and Zoë Harcombe referencing spectacular reversal of type 2 diabetes by those who restrict carbohydrates and increase fats. Prof Mozaffarian, like so many epidemiologists, continues to dismiss such reports as anecdotes, given that the relationship described does not mesh with the population-based, epidemiological studies that he effectively sees as the ‘holy grail’ of nutritional science.

We decided it would be useful to compare macronutrients and micronutrients in Prof Mozaffarian’s recommendations against our own Food4Health guidelines. These amounts and ratios were the very things that Mozaffarian suggested we ignore.

We created two typical days with 3 meals, that amounted to around 2000-2500 kcal of energy, one based on Prof Mozaffarian’s recommendations, the other on our Food4Health guidelines.

Download daily eating plan based on Prof Mozzaffarian's recommendations here and the one based on our own Food4Health guidelines here.

Let's remember that Prof Mozaffarian's recommendations are based on his synthesis of all relevant, primarily epidemiological data. Our guidelines, by contrast, while being based on a substantial amount of relevant published data, they are informed and validated more by clinical experience and positive outcomes. 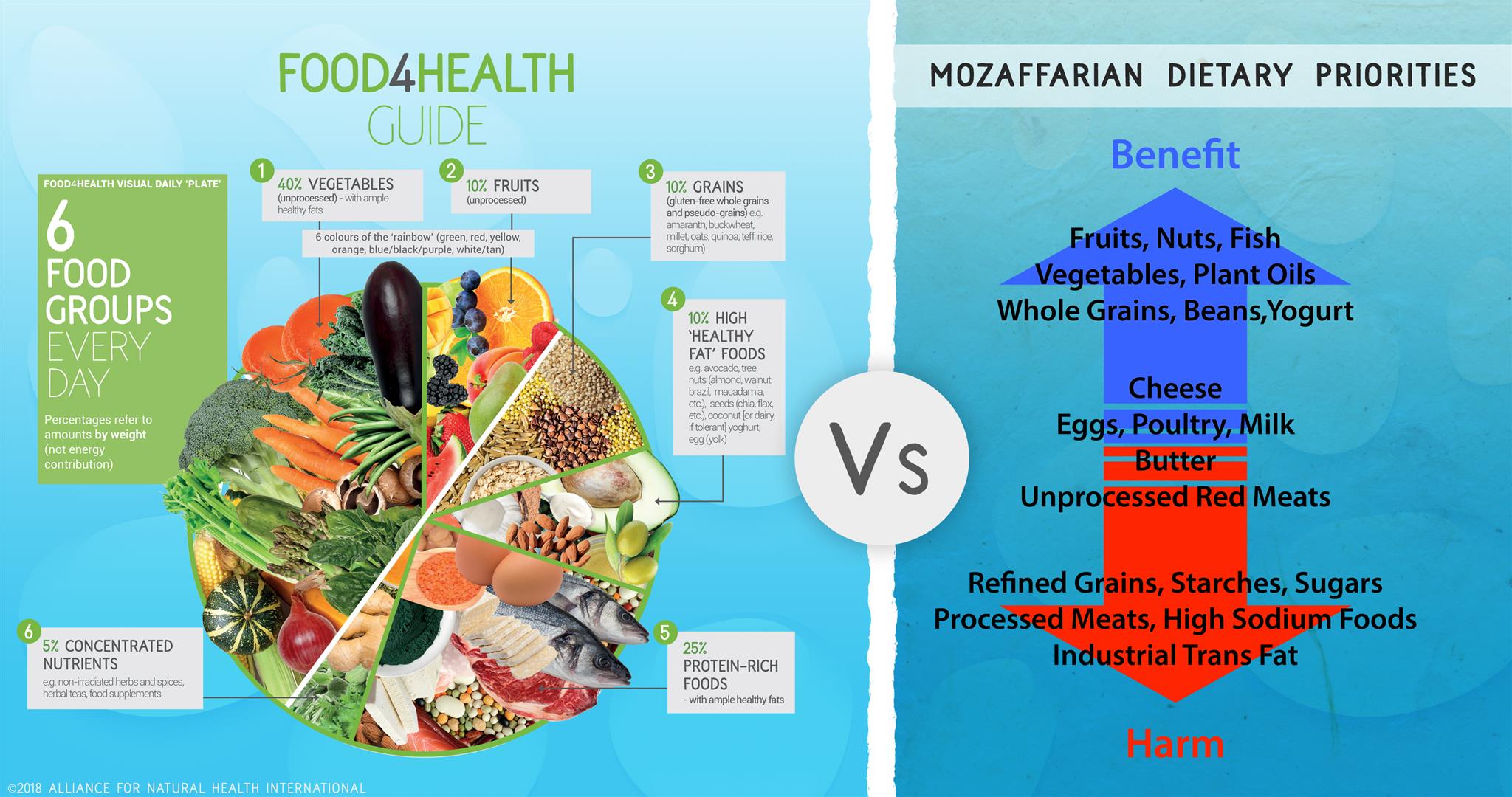 The foods that made up each plate and the macronutrient and micronutrient amounts were based on data from the USDA Food Composition Databases. We could only do the calculation for micronutrients that were scored across all foods so there are numerous that are missing (e.g. selenium, iodine)

The total energy (calorie or kcal) intake for each plate was 2240 kcal for a day’s eating according to Prof Mozaffarian’s recommendation, and 2477 kcal according to our Food4Health guidelines. Fibre intakes were close for each plate and approximated the 30g minimum proposed by the UK government 31 g and 26 g for each plate, respectively.

The data can speak for themselves (see Figures 1 to 3 and Table 1 below). 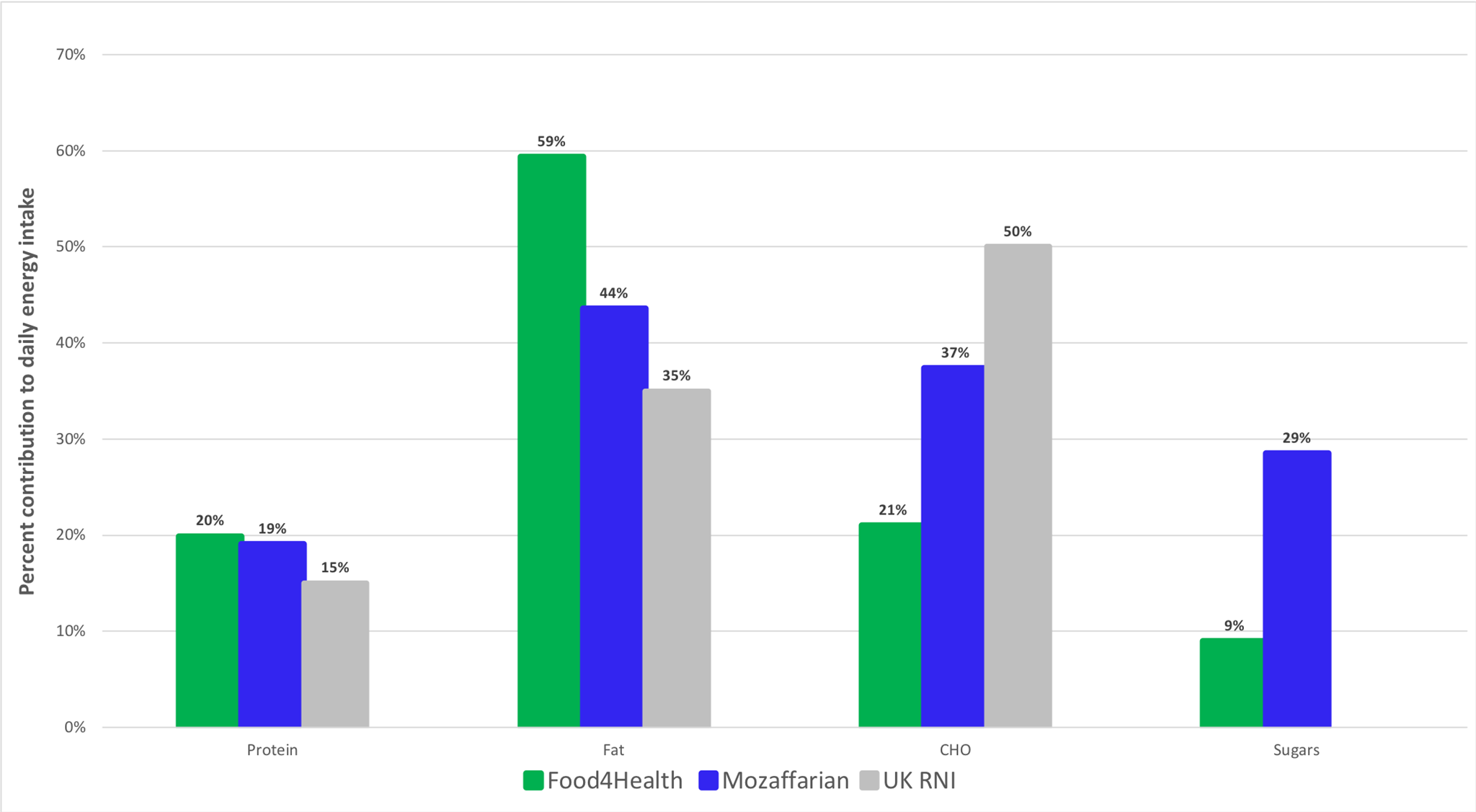 Figure 1. Comparison of macronutrient ratios (based on total protein, total fats, total carbohydrates [CHO]) and sugars) as percentage contributions to total energy based on one day of ‘healthy eating’ according to Prof Mozaffarian’s recommendations and the ANH-Intl Food4Health guidelines respectively, and compared against the UK government guideline amounts (Reference Nutrient Intake, RNI).

Table 1. Comparison of daily vitamin intakes based on one day of ‘healthy eating’ according to Prof Mozaffarian’s recommendations and the ANH-Intl Food4Health guidelines respectively, and compared against the UK government guideline amounts (Reference Nutrient Intake, RNI). 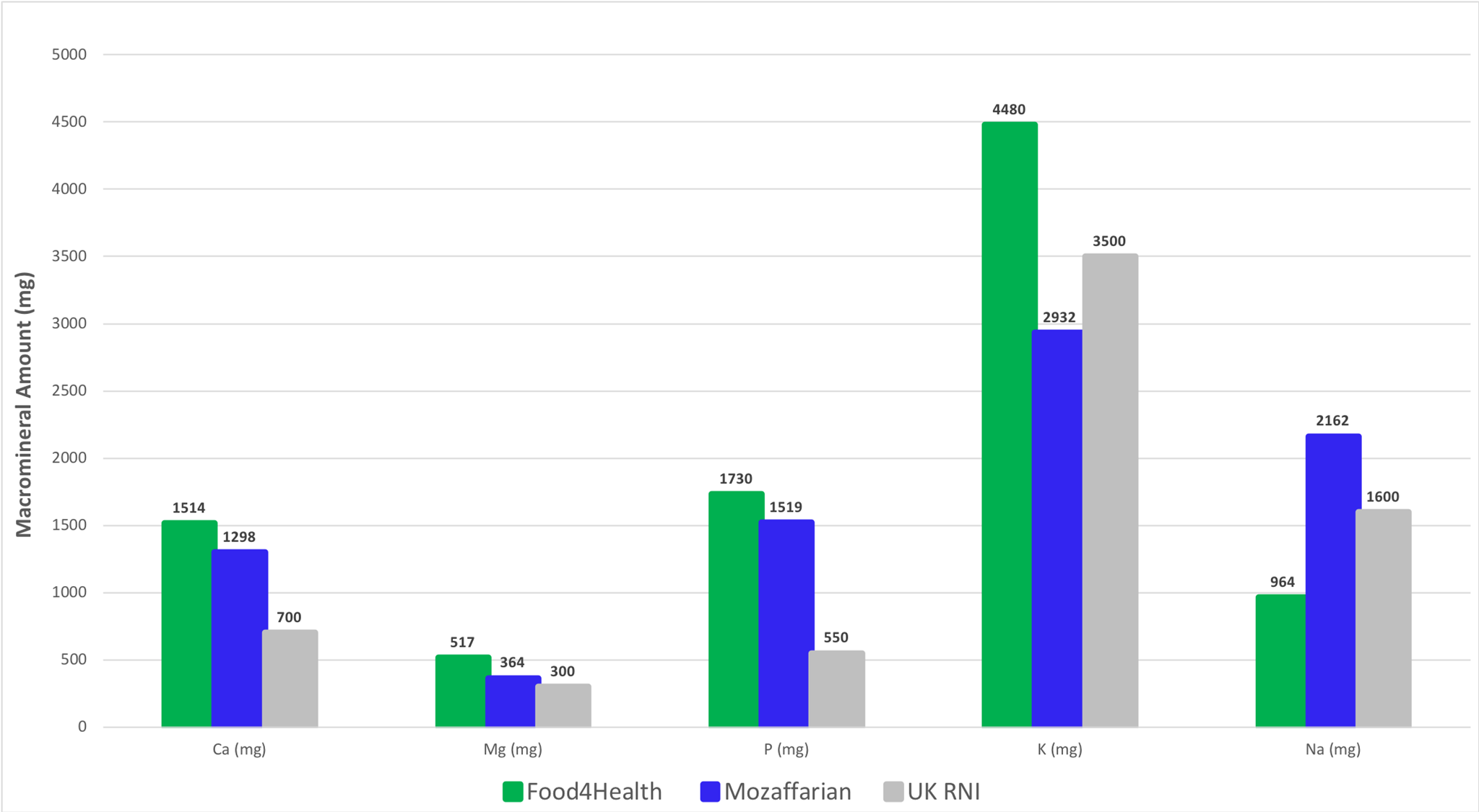 Figure 2. Comparison of selected daily macromineral intakes based on one day of ‘healthy eating’ according to Prof Mozaffarian’s recommendations and the ANH-Intl Food4Health guidelines respectively, and compared against the UK government guideline amounts (Reference Nutrient Intake, RNI). 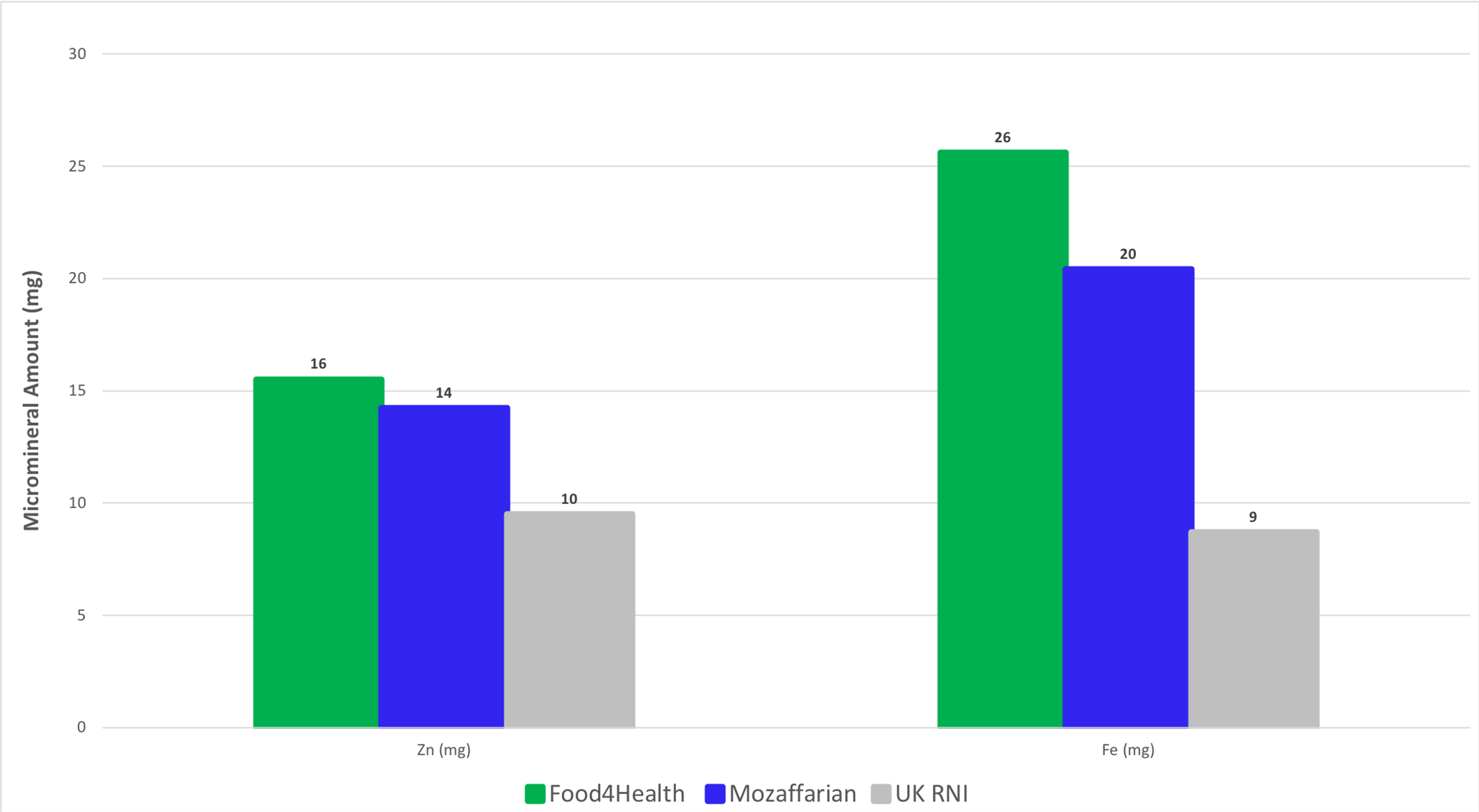 Figure 3. Comparison of selected daily micromineral (zinc and iron) intakes based on one day of ‘healthy eating’ according to Prof Mozaffarian’s recommendations and the ANH-Intl Food4Health guidelines respectively, and compared against the UK government guideline amounts (Reference Nutrient Intake, RNI).

Conclusions - why government guidelines are wrong

This simple comparison suggests that Prof Mozaffarian may be premature in dismissing the importance of macronutrients and micronutrients. It also shows that government guidelines are way off course, even by Prof Mozaffarian's standards given his recommendations apparently are based on what he considers to be the most relevant, high quality data. All in all, it’s no surprise to us that people benefit so much when they reduce carbs, increase fats and/or ingest additional micronutrients - as compared with what government guidelines tell us to do.

It supports the view that governments are wrong to say we should be deriving 50% of our energy from carbohydrates. Even Prof Mozaffarian’s guidelines resulted in a typical day of eating with significantly less carbs than this – and our own guidelines delivered around half of this again – at around 20% energy contribution. Our daily 'plate' was also dramatically lower in total sugars, with only around 10% of energy from sugars as against about 3 times this amount for Prof Mozaffarian’s.

Probably most importantly – our guidelines resulted in around 60% of energy from fats – and even Prof Mozaffarian’s was 44% - both levels being well over the 35% threshold set by government guidelines. This threshold that implies 'the less the better' because there is no minimum target given is a major contributor to why people are becoming obese and developing type 2 diabetes. They are simply deriving too much energy from carbohydrate which is dysregulating their metabolism (see links to our Obesity Fix videos at the bottom of this article).

If governments were to do what Dr Sarah Hallberg and others are calling on them to do, based heavily on, and certainly validated by, their clinical experience – health outcomes would likely change dramatically for the better.

Insulin resistance, the precursor to type 2 diabetes is caused by excessive blood sugar that is in turn caused by excessive carbohydrate intake. It really is not rocket science, although the resultant impacts on metabolism, energy storage and utilisation and appetite regulation are more complex (see our Obesity Fix video).

Recognition of this simple fact more than any other is the major driver for the grassroots-led ‘low carb high fat’ (LCHF) movement that is powered by the public’s experience – not by what governments or academics are telling people to do. It’s not surprising an ever growing number of clinicians who are interested in fixing the current scourge of obesity and type 2 diabetes are now coming on board. How long are we going to have to wait for the academics to follow?

We like that Prof Mozaffarian is asking that we look at food groups. But let's look properly at food quality - at how we can source foods that resonate with our biological workings, rather than ones that are so denatured or contaminated they no longer are recognised properly, triggering autoimmune and other diseases.

In the meantime, let's not forget to keep ignoring government guidelines if we want to live long, healthy, drug-free lives.