You’ll be familiar with the old adage – one frequently applied to things nutritional: “everything in moderation.”

Does that also apply to heavy metals in your fish, pesticides on your blueberries, or transfats in your gluten-free flapjacks? Of course not! There are some things that just aren’t good for us. And there’s currently a big debate as to just how much and what kinds of carbohydrates we should be eating for optimal long-term health. Unlike fats and proteins that we can't live without, carbs are - technically speaking - optional. Yet most humans on the planet rely on them as the primary source of energy. And if we choose to restrict our carbs, what should we replace them with, if anything?

The latest scientific call that seems intended to reinforce public health messaging about carbohydrate intake is directed fairly and squarely at the rapidly growing low carb community. It’s an open access paper published last week in Lancet Public Health that suggests that low carb diets – as well as high carb diets - contribute to early death. The take-home? Eat carbs in moderation, so that they make up 50-55% of the energy of your diet, just the way governments are currently suggesting.

This advice is ironic when we know the majority of the population in Western countries are already doing this yet they’re suffering early, preventable deaths at the hands of obesity, diabetes, heart disease and cancer.

The low carb community, of which we are a part, is comprised of large numbers of consumers, doctors, scientists and even celebrities who have experienced or witnessed spectacular health turnarounds after reducing their carb intake. That includes remission from diseases like type 2 diabetes that was, until recently, widely labelled as 'incurable'. Supporting this experience and observation is a growing armoury of scientific evidence from diverse disciplines ranging from biochemistry to evolutionary biology that goes a long way towards explaining some of the key mechanisms at work that help people to regain their health.

The truth is confusion in this area is rampant. That’s not least because there are, as yet, no clear, universally accepted definitions for what is meant by a ‘low carb’ diet or a ‘low carb high fat’ (or LCHF) diet. That's despite Richard Feinman PhD from State University of New York Downstate Medical Center in Brooklyn, New York, and 25 other scientists and clinicians attempting to clarify definitions in their seminal 2015 publication.

Understandably there has been a reaction by some of the leaders in the LCHF community, with the likes of Richard Feinman leading the charge.

While the ultimate aim is to have the paper retracted, this we think is a tall order given the scale of interests involved in maintaining the status quo. We shouldn’t forget that most type 2 diabetics who adopt low carb or 'keto' diets are able to come off medications, such as metformin, Glyburide and Januvia. Type 1 diabetics generally substantially reduce their insulin. And it’s a Lancet spin-off journal we’re talking about.

Are the findings of the new Lancet Public Health study reliable?

In short, like Dr Feinman and others, we say no. And that’s not just because we don’t like the findings or the paper’s conclusions. Predictably, the study's conclusions have been reverberated around the world. They’ve made headlines that include, Low carb diets could shorten life, study suggests (BBC), Both low- and high-carb diets can raise risk of early death, study finds (Guardian), Low-carb diet linked to early death, medical study suggests (USA Today), amongst many others.

What kind of study is it? In essence, the study has two parts. The first is a survival analysis which measures all-cause mortality in the ongoing prospective observational Atherosclerosis Risk in Communities (ARIC) cohort study of 4 different US communities and then attempts to relate this to self-reported intake of carbohydrates. The second part is a meta-analysis which compares the ARIC data with 7 other cohort studies, including the multinational PURE study published last year that included findings from over 135,000 people on 5 continents. After 7 years of follow-up, the authors of the PURE study concluded that high carb diets led to the highest mortality rates and those consuming more fat (albeit only 35% of daily energy) were 23% less likely to die than those who consumed least fat (10% of daily energy). It couldn’t exclude the possibility that less carbs and more fat were better still, following a linear relationship, so it was generally good fodder for those wanting scientific support for low carb diets.

The PURE study therefore put some high profile noses out of joint. Not least were the scientists that have been primarily responsible for informing current dietary guidelines, including eminent epidemiologists like Professor Walter Willett from the TH Chan School of Public Health at Harvard.

In many ways – the latest Lancet Public Health study can be seen as the establishment response to PURE – or what some might argue was the incorrect interpretation of PURE. It’s also no surprise to find Walter Willett, the architect of the original questionnaire used in the ARIC cohort, listed as a co-author.

We are independently preparing a response to the senior author of the paper to which correspondence is directed, Dr Scott Solomon from the Cardiovascular Division, Department of Medicine, Brigham and Women’s Hospital. So we won’t get bogged down here with the detail of our scientific complaint. However, we’ve broken down our concerns into 5 main areas, and below we summarise in lay terms some of our main concerns:

When the survival analysis plots for the ARIC data computed a U-shaped curve, you can only imagine the excitement among some of the authors, particularly those who’ve long supported relatively high carb, wholegrain, low fat, plant-based diets. They'd blown away the possibility that low carb is better than moderate carbs - and that there's a linear and positive correlation between carb intake and all-cause mortality. But that's only if the data were reliable and relevant.

The problem is that the ARIC data aren't representative. It’s a fudge. Two self-reported snapshots, nothing like enough data on other factors that could have influenced mortality – and all of it entirely unrepresentative of what modern-day, low carb consumers are eating or doing.

The problem with science in a world in which so much science is controlled by so few (i.e., big corporations, governments, the Bill and Melinda Gates Foundation, etc.), is that it’s very vulnerable to manipulation. Nutritional studies are notoriously difficult; unlike drugs, nutritional studies can’t compare the effects of eating against not eating. When we cut down one type of food, what do we substitute it with? And when we look at studies with very long follow-ups like the ARIC study, do we cater for all the changes that have occurred in our food production methods over the last two and a half decades?

Public health policy relies on big studies with big numbers, and increasingly, ‘mash-ups’ (meta-analyses) of multiple studies with data that can’t or shouldn’t be compared, like apples and oranges. These studies are often quite indifferent about the variable quality of data going into them. In the field of nutrition, randomised controlled trials (RCTs) and prospective cohort studies (PCSs) have become the almost exclusive sources of information for public health advice. Clinical findings and experience are dismissed as anecdote. 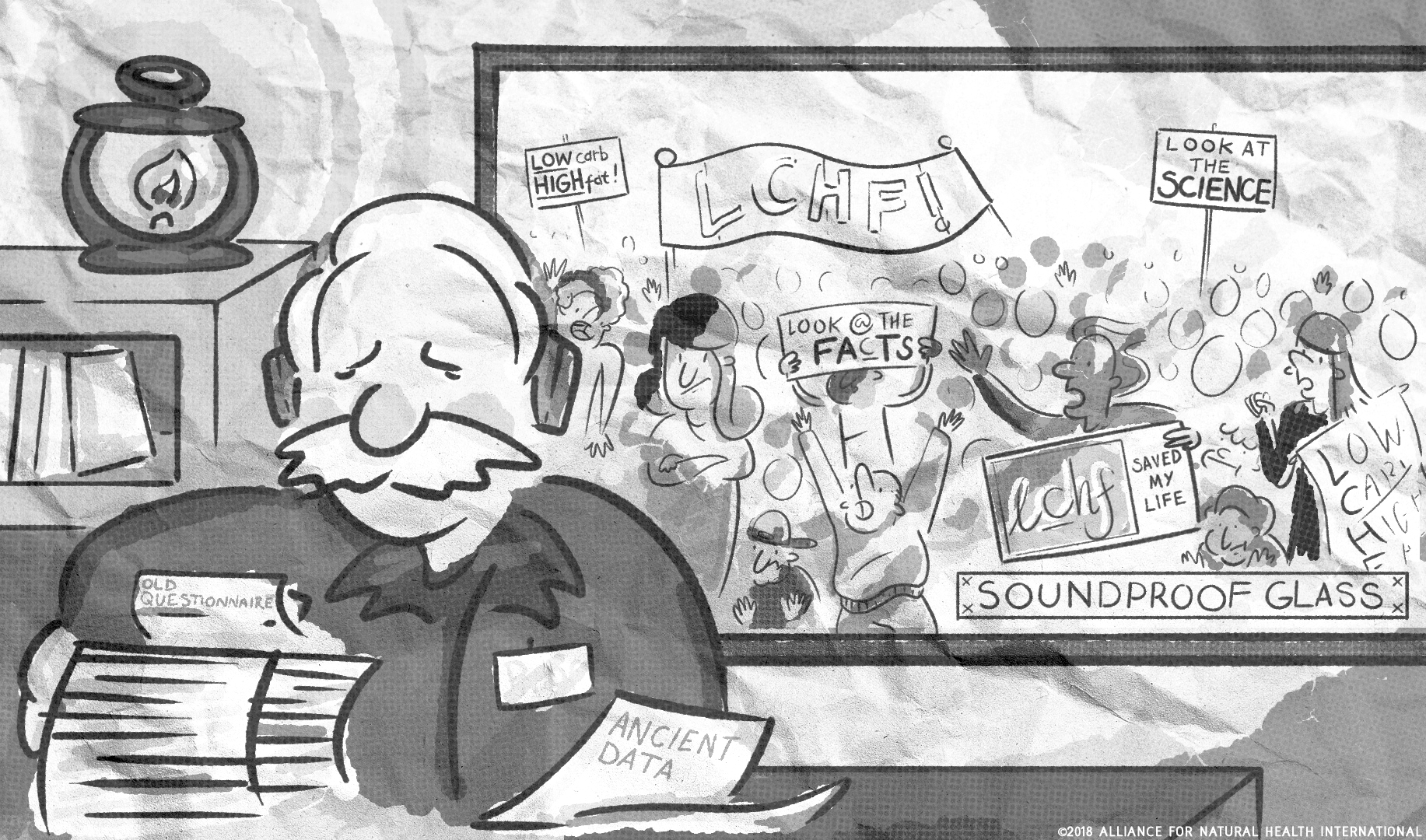 We might need to wait a bit longer to understand more about the health of those who choose to adopt low carb diets that include a diversity of plant-based nutrients and/or healthy animal-based foods, as proposed in our Food4Health guidelines. But there are some over-arching principles we consider to be entirely compatible with low carb, healthy diets:

We’ll keep you posted on our progress with our correspondence with the paper's authors.

Volek & Phinney (2011) The Art and Science of Low Carbohydrate Living

Volek & Phinney (2012) The Art and Science of Low Carbohydrate Performance

Back to ANH-Intl homepage