Home News Remdesivir – out of the ashes but no miracle cure 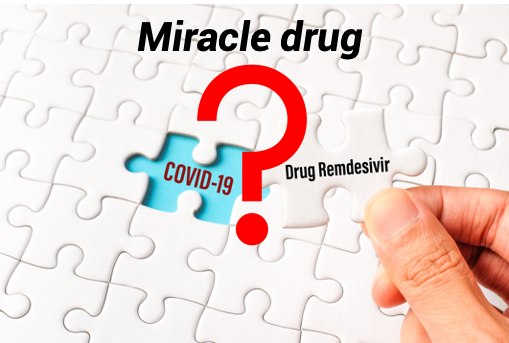 Remdesivir – out of the ashes but no miracle cure

How did Gilead’s Remdesivir go from failure to a ‘miracle’ drug for Covid-19?

The pandemic that’s swept the globe in recent months has left many in fear for their lives as citizens are told there are no treatments for this particular coronavirus. In the stampede to trial new treatments the normal scientific protocols and timelines required to prove safety and efficacy have been swept aside.

If at first you don’t succeed...

Over the last 24 hours, the international airwaves have been filled with rejoicing over the first US and UK approved experimental drug, remdesivir, for intravenous treatment of serious Covid-19 disease in hospitalised patients. The adenosine analogue, originally developed to combat Ebola, didn't perform favourably in clinical trials compared with other therapeutic approaches. Pharmaceutical company, Gilead Sciences, attempted to recycle it to treat SARS and MERS, but once again any benefits were marginal at best. Fast forward to January 2020 when Gilead took the opportunity of throwing its hat into the ring to reposition the drug for use against the emerging coronavirus, partnering once again with Dr Anthony Fauci’s US National Institute of Allergy and Infectious Disease (NIAID).

The first trial for remdesivir as a treatment for SARS-CoV-2 took place in Hubei, China. This was a randomised placebo-controlled multi-centre trial across ten hospitals with 158 patients receiving the drug and another 78 a placebo. In a blow to Gilead’s hopes, the trial concluded that remdesivir “…was not associated with statistically significant benefits” sending Gilead’s stock sliding. Undeterred, the company brushed the results aside saying the numbers studied were too low preventing it from being able to come to statistically meaningful conclusions.

In February 2020, Gilead announced additional trials as part of its quest to get their product approved. Gilead would be running two phase III trials under the name SIMPLE with the other to be carried out by the NIAID.

At the end of April, Gilead released a statement boasting the NIAID trial had met its unspecified primary endpoint, based on interim results, sending stocks and hopes soaring. It turns out that the end point was shortening the average duration of disease from 15 days to 11 days in hospitalised patients. Mortality rate in the trials dropped slightly from 11.6% to 8%. In an undoubted effort to generate PR for remdesivir, Dr Fauci claimed the results were “highly significant if you look at the time to recovery”.

Gilead also released top-line results for one of its phase III SIMPLE trials comparing duration of dosing and showed a 5-day course of remdesivir had the same efficacy and short-term safety profile as a 10-day course.

But crucially, in Gilead’s press release of 1 May when it celebrated the approval by the US Food & Drug Administration (FDA) of remdesivir for emergency use among hospitalised patients, Gilead cited: “Remdesivir is an investigational drug that has not been approved by the FDA for any use. It is not yet known if remdesivir is safe and effective for the treatment of COVID-19.”

If the trial fails, ‘fix’ it

But all was not as it seemed. In early April, Gilead changed the primary endpoints for both of its trials to focus on trying to improve its results. The company also added a cohort of mechanically ventilated patients (not previously included) and enrolled more patients.

As indicated above, the interim data from the NIAID trial showed an average improvement in recovery time of just 4 days (11 days vs 15 days).

The NIAID then made the difficult decision to stop the study given evidence of marginal benefit for those receiving treatment. This raised ethical issues around withholding remdesivir treatment from seriously ill patients who had been assigned to the placebo group. This, in turn, prevented researchers from collecting further meaningful data.

The study has now been published in the New England Journal of Medicine. Assessing viral load, which surely should be a primary outcome for a trial involving an antiviral drug, does not appear to have been an integral part of any of the studies. The data that are available does not suggest a reduction in viral load suggesting that outside the lab and in the real world, the proposed mechanism of interrupting viral RNA replication might be modest at best.

As always - the world of Pharma isn't always (or often) about doing the best for patients. There are plenty of interests involved. The Chinese government-owned Institute of Virology in Wuhan, close to the original epicentre of the pandemic, filed for a patent on 21 January. A Chinese manufacturer BrightGene has announced that it has started mass production of remdesivir. A global war over intellectual property and marketing rights looks increasingly likely - all the while taking the focus off providing the best possible solutions for those most severely affected by the new coronavirus. Especially given there are unpatented nutrients like vitamin C that may fare much better than remdesivir in a side by side comparison.

In an open letter at the beginning of April, Gilead Chairman and CEO Daniel O’Day announced the company would be donating its existing supplies of 1.5 million doses of remdesivir for compassionate use, expanded access and clinical trials. Sounds very charitable, but one wonders what the expiration dates of these stock are. As with the charitable deeds of so many corporates, there's an underlying profit driver: Gilead is estimated to achieve sales of $1.1 billion of the drug this year, $3.2 billion next year, and $2.5 billion in 2022.

Gilead can now benefit from owning the rights to an experimental drug that ostensibly ‘works’. Shortly after the announcement of the interim results of the NIAID trial, remdesivir was given emergency use authorisation for the treatment of Covid-19 by the US Food and Drug Administration (FDA). The Japanese Ministry of Health, Labour and Welfare granted regulatory approval at the beginning of May. UK critical care doctors will also get the opportunity to use remdesivir on a limited number of patients. Matt Hancock, the UK Health Minister, chimed in, over-optimistically, claiming the limited use of remdesivir for UK patients was “the biggest step forward yet” as the UK became the latest country to announce approval of the drug. We'll be interested to see data that supports such claims.

Enthusiasm for the drug is likely to continue as more and more countries rush to approve its use, but only time will tell just how effective and safe this new drug is for hospitalised, seriously ill patients. What we know for sure, it's no miracle cure.