Home News The corruption of science through the suppression of dissent 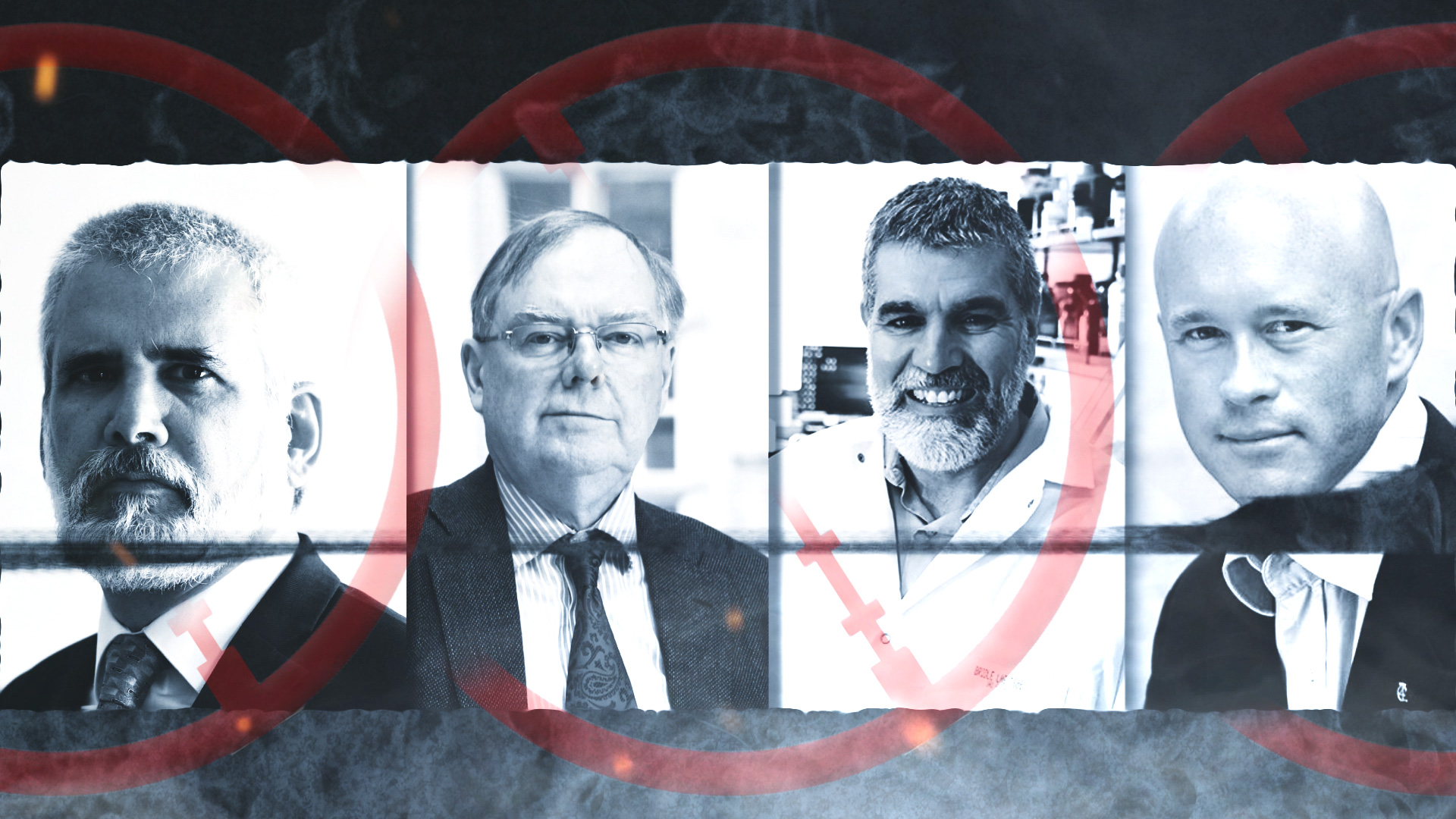 The corruption of science through the suppression of dissent

Examples from 3 continents emphasize the global nature of the problem

There’s something very wrong with ‘the system’ when any information or viewpoints from leading scientists or doctors that don’t mesh with the mainstream narrative are ridiculed, marginalised or censored. But it’s even worse than that. Careers and reputations are being decimated too, breeding a culture of fear that’s presumably aimed at making the vast majority of influential voices toe the line – or be silent. The suppression of dissent is well known to work counter to the very notion of scientific progress. It’s the breeding ground of dogma – and while it might benefit a few, it neither benefits science nor the majority.

There are few parts of the world that escape this tyranny against science. It’s a global phenomenon. Every day we hear news of medical doctors losing their licenses because they’ve spoken out. This culture of fear has been rampant in many parts of the world, the UK included, for over a year.

We offer you in this article five examples from 3 different continents that give some sense of the injustices we currently face as ‘the system’ attempts to justify at all costs the notion that novel, synthetic biology vaccines are the only option we have if we’re to emerge from our current locked down and isolated penitentiary. That’s irrespective of the fact the synthetic biology technology being used in the still-experimental front runner vaccines is so new it’s never been tested at scale.

Robert W Malone MD is the inventor of mRNA vaccines. This hasn’t always been appreciated, a fact that Dr Malone’s wife of 42 years and co-worker, Dr Jill Glasspool Malone, attempted to put right in an article a month ago.

Dr Robert Malone’s 3-hour interview with evolutionary biologist Brett Weinstein, about which we reported has now been removed from YouTube. Now LinkedIn has deleted Dr Malone’s entire profile, so sabotaging one of the most important platforms of connectivity used by any consultant. Worse, Wikipedia is attempting to rewrite history by scrubbing out Robert Malone as the inventor altogether.

British medical sociologist, Professor Robert Dingwall, who sits on the UK’s key advisory committee on vaccines for the UK government, the Joint Committee on Vaccination and Immunisation (JCVI), found the need to express his critical views on policies that include the roll-out of covid vaccines to children on his Twitter feed. You’ll see what he was so keen to communicate below: 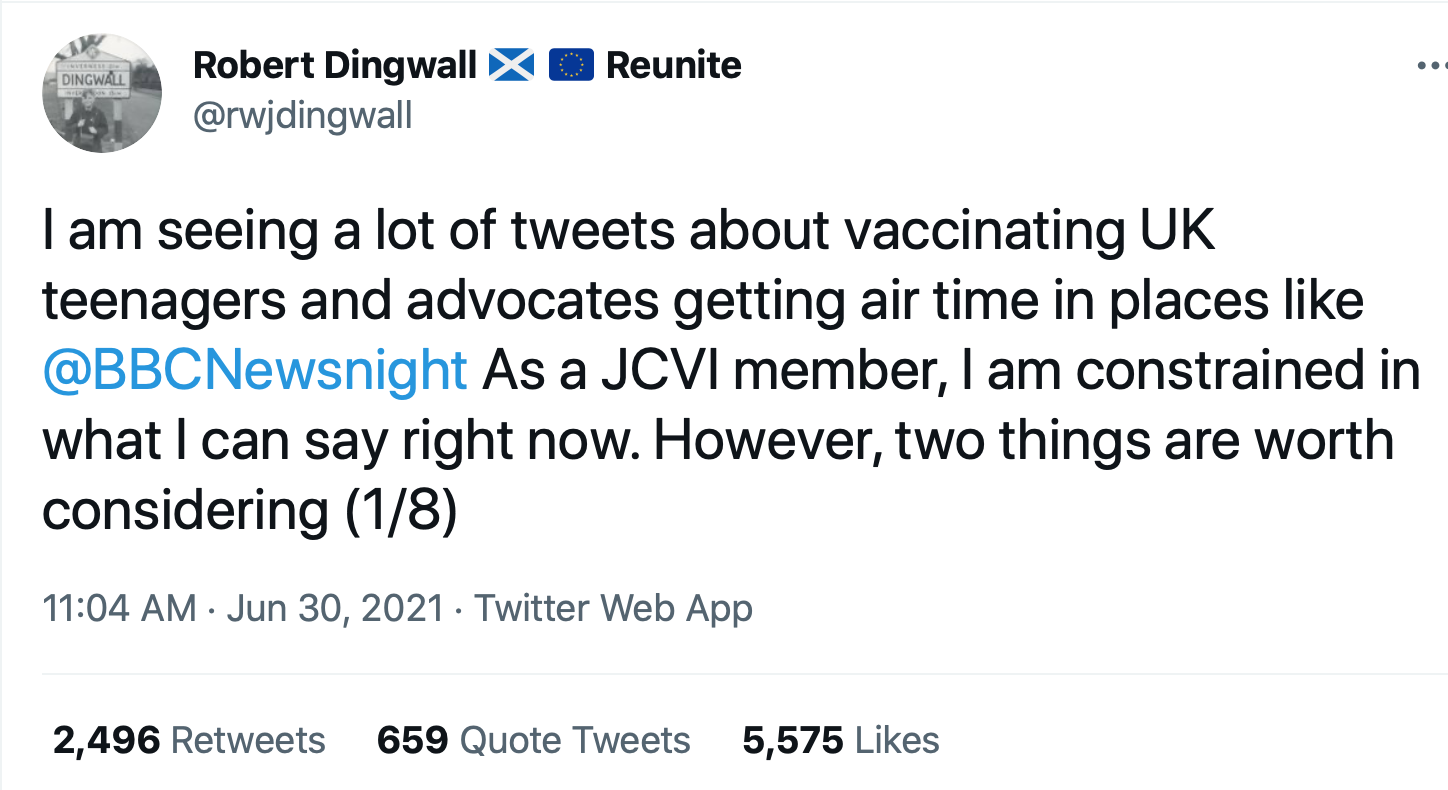 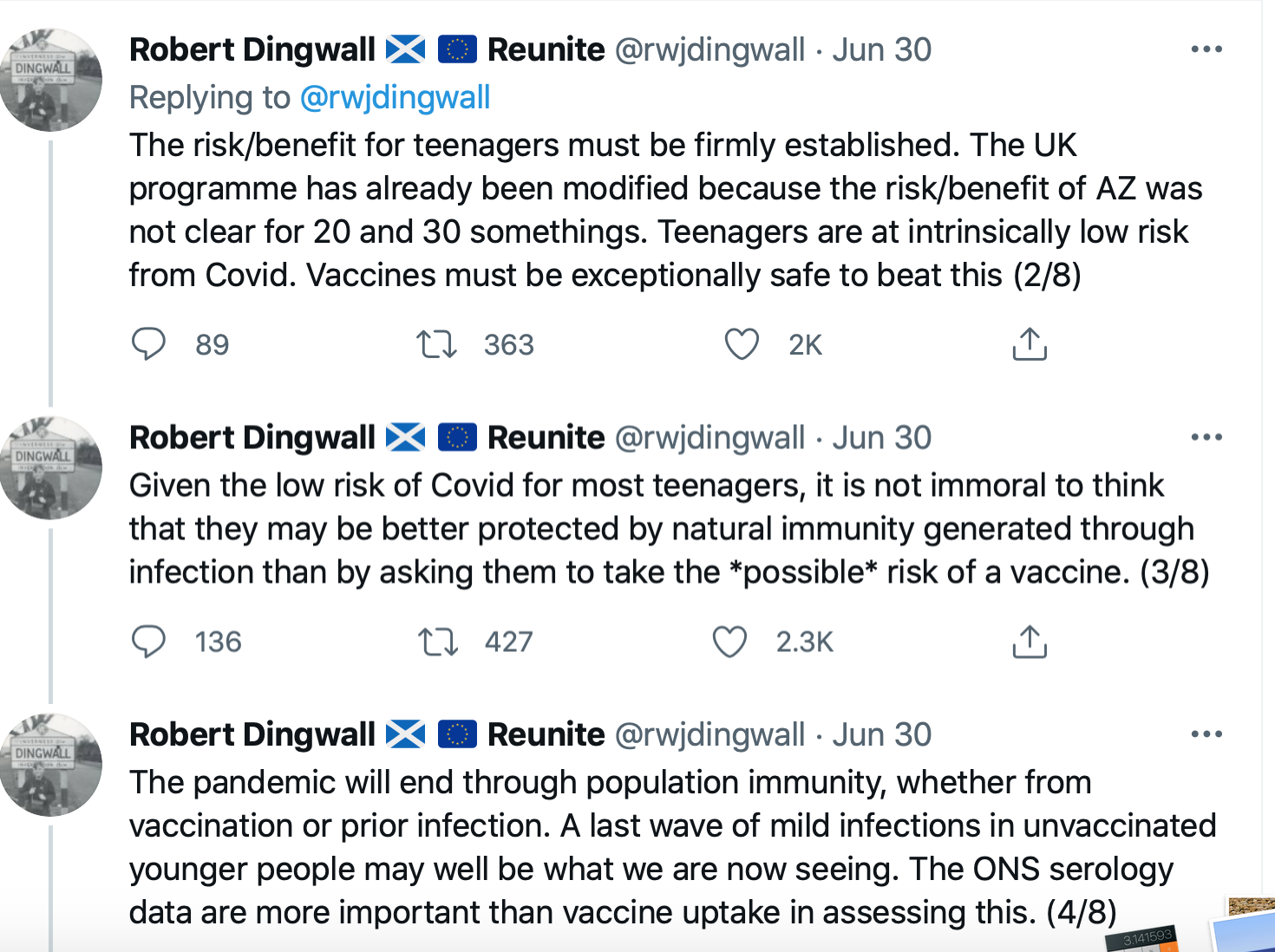 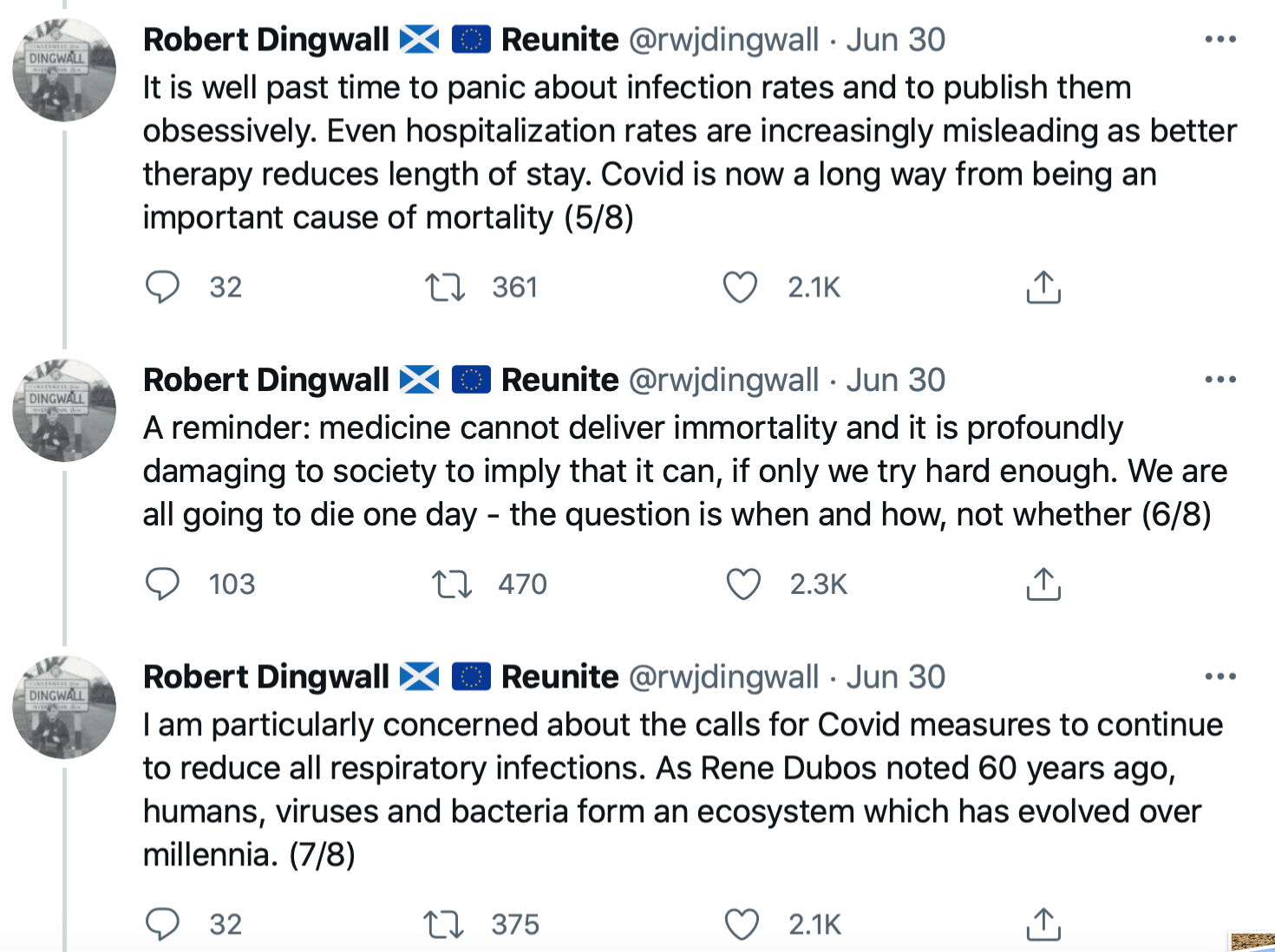 This from a sociologist who has been clearly pro-vax and critical of the anti-vax movement. His views were regularly reported in newspapers, but now that he's questioning the mainstream narrative, he's now being ridiculed and marginalised.

Viral immunologist Dr Byran Bridle from the University of Guelph has been crystal clear over his general support for vaccination. Yet the unearthing of previously confidential data about the Pfizer covid vaccine caused him to share his concerns on YouTube. YouTube saw fit to label this as medical misinformation and removed the video. 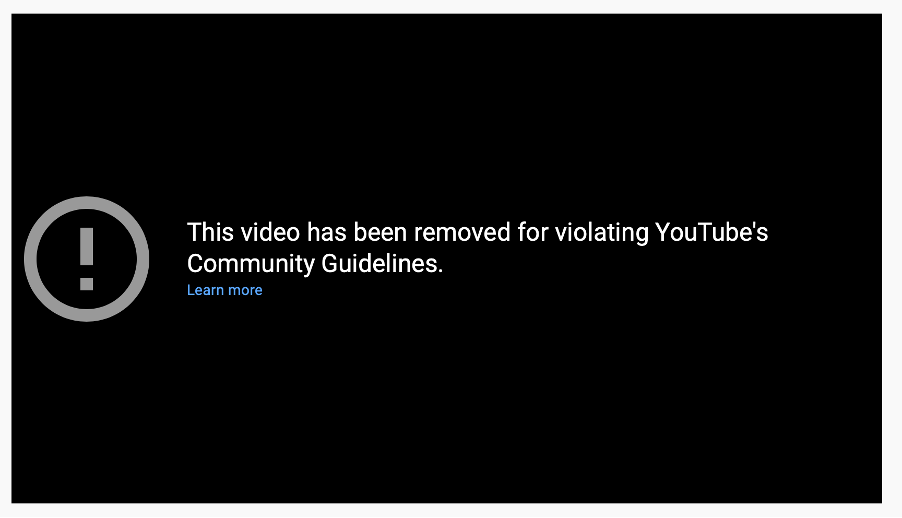 Now, Dr Bridle has been the victim of a concerted smear campaign designed to damage or destroy his reputation. A scientifically misleading website has also been set up in his name and is designed to discredit him. However, after taking some time to absorb the tidal wave of vilification, Dr Bridle is undeterred as you can see by his recent video about why masks don't work.

We are pleased to see a robust open letter in support of Dr Bridle with a significant list of professional and citizen signatures at the end of it.

Dr David Martin, chairman of M-CAM, has garnered significant notoriety after appearing in the documentary, Plandemic Indoctornation. Since then, the fact checkers have had a field day. Labelled a "financial analyst and self-help entrepreneur" who peddles conspiracy theories on YouTube misrepresents the seriousness of his day job and demeans a man passionately committed to ethical engagement. In fact, Dr Martin is somewhat of a polymath. Amongst his many credits in service to humanity is the development of the world’s top-three performing global equity indexes powered by his company M-CAM. He has a history of bringing white collar criminals to justice and never turning a blind eye, which is why he's been waving a red flag ever since the anthrax attacks of 2002.

Since 1998 M-CAM International has been the world's largest underwriter of intangible assets used in finance in 168 countries. Their underwriting systems include the entire corpus of all patents, patent applications, federal grants, procurement records, eGovernment records and more, so Martin and his team have the ability to track what's happening and who's involved in what's happening. His business is to monitor the innovation around the world and the economics of that innovation.

His latest interview with attorney, Reiner Fuellmich, is set to make him even more unpopular and should have the fact checkers in overdrive to try and discredit his evidence. Evidence in which Dr Martin shares 20 years of painstaking reviews on over 4000 patents, to demonstrate that we are living through a manufactured crisis.

From the well-funded hatchet job on the Disinformation Dozen to all those who who have been censored, deplatformed and marginalised over the past 16 months for not perpetuating the mainstream narrative, there are a number of commonalities:

May we all continue to take a leaf out of the same book and apply objectivity when faced with the new pseudo-religion called scientism and work hard to avoid the the kind of inertia responsible for accepting the 'new normal' without engaging critical minds.

>>> Avoid inertia by reviewing our repository of covid commentary at covidzone.org

>>> If you're not already a member, please visit our ANH Pathfinders section to find out more