The silent epidemic of modern healthcare

With billions being spent on trying to make modern healthcare systems safe, it’s hard to fathom that preventable medical harms present among the biggest risks to which those of us living in Western industrialised countries are exposed during the course of our lives. Worldwide one in 20 patients is at risk of being harmed by the medical care they receive. In high-income countries that figure rises to 1 in 10 patients. The WHO estimates the risk of dying from a preventable medical accident is about 1 in 300.

At some point in our lives nearly all of us make use of the mainstream healthcare system. Most people still rely largely on prescription of drugs at the very least, that often extract a heavy price for their use. Overwhelming the natural processes in our bodies that we rely on for good health which are not nurtured by the interventions offered by a system that holds itself out as a healthcare system, when it really is a disease management system. New research presented at UEG Week 2019 reveals the terrible toll of commonly used drugs on our gut health. Obesity and other chronic diseases continue to spiral, alongside antimicrobial resistance that is generated by overuse of antibiotics.

New figures show trust in the pharmaceutical industry in the US has sunk to an all time low.

Never has a new paradigm been more needed. One that gives us the tools we need to create health by working in synergy with nature rather than against it. Yes, we will need our medical system sometimes, but it is possible to significantly reduce that reliance.

A few years ago, we commissioned two studies using UK and EU government data that showed preventable deaths in hospital are one of the greatest risks to health that society faces. The studies also highlighted the safety of natural health options. As levels of chronic disease soar despite all that modern medical technology can muster, urgent and significant change is needed. This month’s #ThrowbackThursday reshares the ANH studies along with a Founder’s blog from Rob Verkerk published earlier this year commenting on the extent of preventable harms in today’s medical systems. 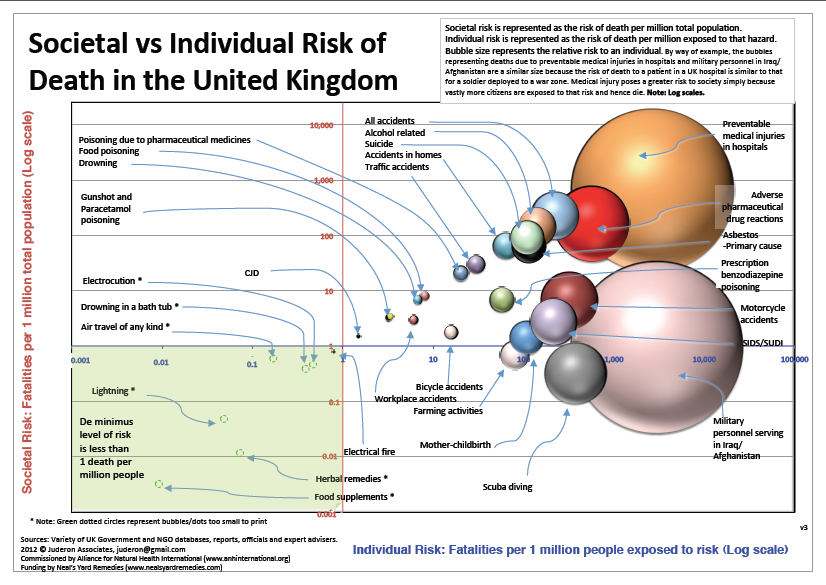 Risk: it’s a tricky issue, and nowhere more so than in the debate around natural versus mainstream healthcare. Today, however, we’re not interested in the details and history of the debate – instead, we want to push things forward.

We’re delighted to be able to share with you graphical comparisons of the risks of death in the UK from many risky and not-so-risky activities, both as an easy-to-understand bubble chart and as a more traditional bar chart. The relative sizes of the bubbles show how likely the individual is to die from each activity: a bigger bubble means a proportionately larger risk of death. In the next few days, we’ll have more data for you, this time looking at the situation in the entire European Union (EU). 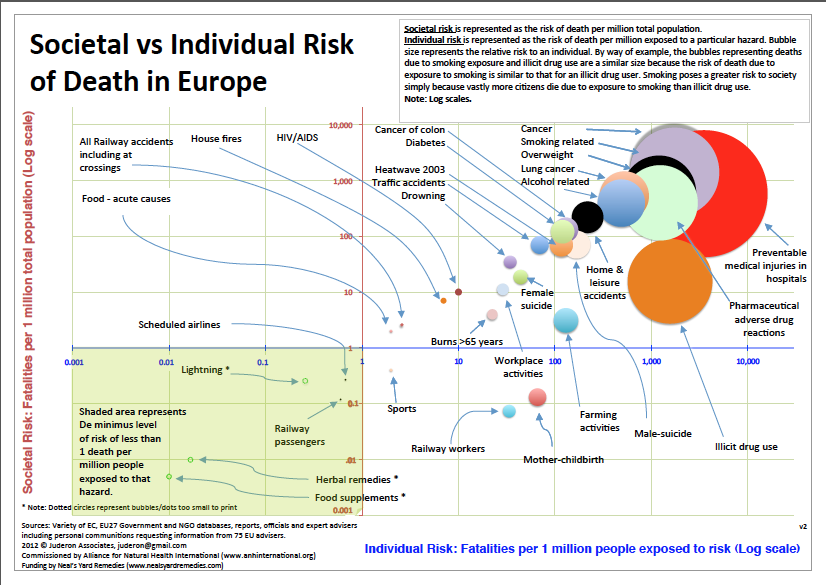 Following ANH-Intl’s release last month of UK data on some key causes of death, we’re now in a position to release data sourced from across Europe. These data, drawn from official European Union (EU) sources, reveals once more that natural health products are among the safest things we put into our bodies – confirming the UK data. The new figures show that EU hospitals are not only hundreds of thousands of times more likely to cause death than natural health products – they are twice as deadly as either cancer or smoking. So why are natural products under threat for ‘posing a risk to public safety’?

Just a few short weeks ago, we brought you exclusive data proving what natural health advocates have said all along: that products associated with natural forms of health management are among the safest substances that human beings put into their bodies. Compelling as they were, however, those data were for the UK only.  Now we cast the net wider and bring you a comparable analysis using EU-wide data.  And the new information paints a picture that is just as stark.

Founder’s Blog: ‘First, do no harm’: time for reflection on the Hippocratic Oath

On the back of a new study showing the extent of preventable harms in medicine, Rob Verkerk suggests it’s time for reflection

It’s a big day in the UK – we have a new Prime Minister in the form of Boris Johnson. He’ll be trying to pull off what Theresa May couldn’t. But it’s not just Brexit, it’s a divided party and a divided country that Mr Johnson will endeavour to repair. And then there’s bringing about positive outcomes, for people, country, the economy, industry, healthcare and the environment, to name just a few key areas. Quite a big ask, you might say.

This notion of big ideas and big visions is one I’d like to pick up in this video-assisted blog – about how we manage our health. In short, doctors are the professional group with whom many of us entrust our most valuable asset: our health. Doctors are harvested from the cream of our academic systems that select out the most academically gifted from those of average or lesser ability. When these are streamed into medical school, they often have strong ideologies based around helping people. Many young doctors sign up to the principle that is often incorrectly attributed to the Hippocratic Oath, in which they promise “primum non nocere.” This is a Latin translation from the original Greek, which, in English means “first, do no harm.”

It turns out that while Hippocrates did propose that physicians should “first, do no harm”, this statement is derived from a different work, “Of the Epidemics”, not the Hippocratic Oath.