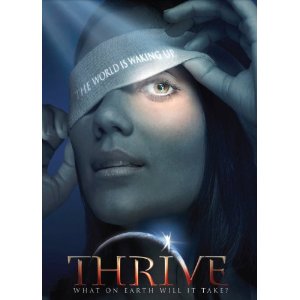 Addressing our failure to Thrive

Have you seen Thrive yet? After being asked the same question several times ourselves, we thought we’d better check it out – and we’re glad we did.

So what’s it all about?

Thrive is a fascinating and well-produced film, one which discusses many under-the-radar issues in a quest to discover why, “For the majority of people on the planet, life isn’t about thriving: it’s about surviving, just trying to hang on”. Most importantly, it offers potential solutions to the problems it raises, and highlights just how much power the individual has to change things.

Some of the subjects covered by Thrive include the suppression of ‘free energy’ technologies, ownership of the money supply, fractional reserve banking, the fundamental patterns of nature and suppression of healing approaches by the medical mainstream. And for those of you worried about buying into some wild, unsupported ‘conspiracy theories’, we are told that everything in Thrive is backed up by solid evidence. As such, you might expect it to be the brainchild of seasoned campaigners, produced on a shoestring; but it’s not.

The Official Thrive movie trailer — to wet your appetite

Thrive is the result of research by Foster Gamble over "nearly a lifetime". If that surname sounds familiar, it’s because Foster is a scion of the Gamble family of Procter & Gamble fame. After certain experiences, as he explains in the film, he underwent a dramatic conversion and chose a very different life path from the establishment position for which he was being groomed. With Thrive, Gamble has invested a considerable amount of cash into a slickly produced, well researched movie that makes the most of the Internet age to guarantee wide distribution.

We won’t go into the problems here – we’d recommend you watch the film and find out for yourself. Central to many of them is a concept of a ruling elite, largely hidden but represented by corporations and politicians, who are entirely concerned with their own self-interest at the expense of everyone else on the planet – and of the planet itself. We guarantee that only the best informed won’t find something new and interesting in Thrive.

Introducing his solutions, Foster Gamble asks the crucial question: “Are we humans what the elite would have us believe – stupid, greedy creatures who, if left to our own devices, would devolve into violence and chaos?...Or are we naturally caring and creative?” The destructive agenda of the ruling elite is, he says, based on perceived scarcity of resources, the belief that some people are more deserving than others and the need for ultimate power and control.

Thrive suggests some simple steps that anyone can take in order to weaken the elite’s stranglehold – or, as Gamble refers to it, the ‘Global Domination Agenda’. Many of the steps individuals can take echo ideas that we’ve promoted at ANH-Intl many times over the years.  Because they really are so straightforward and potentially effective, we’ve listed them for you below:

In case you hadn’t guessed already, we strongly recommend Thrive to all our supporters! It’s not often that a widely distributed, well-produced and thoroughly researched film makes it into the public consciousness, let alone one that covers such a wide range of hidden topics and provides workable solutions. We think it’s appropriate to give Foster Gamble the last word.

“We can create a world where people can thrive, where we can feel safe and secure. The air, water and food are clean. Where communities are capable of producing their own energy and food, and trade is open and fair. Rather than focusing on punishment, instead justice restores lives and losses...Doctors...keep people healthy. Education is voluntary, serving the needs of individuals instead of corporations. We get honest feedback from independent media. There are no subsidies and no bailouts.”