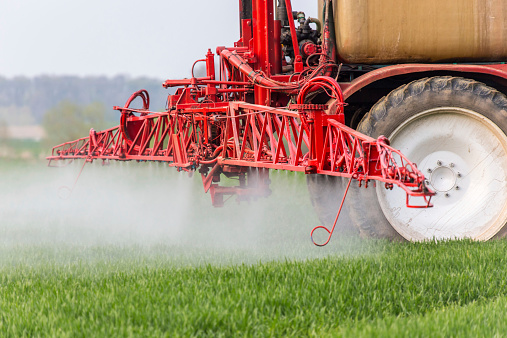 You’ve got to hand it to Prof Gilles-Eric Séralini.  He may have lost one of the battles along the way, but he’s not deterred and looks like he’s going to win the war.  His new study, published this month in Cardiovascular Toxicology, has found that the widely used, Monsanto-manufactured, glyphosate-based herbicide, ‘Roundup’, used with glyphosate-resistant GMO crops, has toxic effects on mammal hearts.  Glyphosate is declared by Monsanto to be the ‘active’ ingredient in Roundup products, but it was only in combination with the unknown added adjuvants (included in the herbicide to enhance the effects of the active ingredient), that the toxic effects to the heart have been noted. Prof Gilles-Eric Séralini, of the ‘retracted and republished’ long-term GMO rat feeding study fame, is a co-author and this study was carried out in his laboratory.  A statement on his website said “this confirms the findings of other animal and test tube studies that complete pesticide formulations are more toxic than their isolated “active” ingredients”, yet only glyphosate in isolation is “tested and assessed for long-term safety in regulatory approvals”. 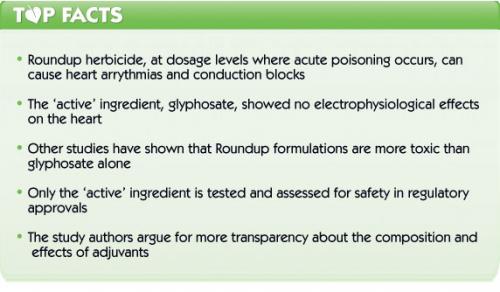 Roundup’s toxic effects on the heart

The study, entitled “Cardiotoxic electrophysiological effects of the herbicide Roundup® in rat and rabbit ventricular myocardium in vitro”, was led by Steeve Gress of the University of Caen, France.  The doses used “were equivalent to those that would be expected in acute poisoning incidents”.  The numbers per treatment or control group were small, but this isn't unusual for this kind of electrophysiological study.  For a ‘Petri dish’ study of excised rat and rabbit hearts, it’s provided really important evidence for one of the multiple mechanisms of why and how people die if they suffer serious accidental poisoning (estimated in 1990, to affect a million agricultural workers annually), or if they use the worlds most common herbicide in a bid to commit suicide.  It also throws up an incredibly important and often overlooked point: the fact that adjuvants or non-active ingredients within a pesticide formulation may be more hazardous than the active itself.  What makes matters particularly difficult for any independent research is that pesticide regulation the world over does not require full disclosure of ingredients.  It also prevents farmers, consumers and others being able to make an informed choice.  However, the findings of the study are not necessarily relevant to people exposed chronically to ingested pesticide residues.

Gress and colleagues found that Roundup “had toxic effects on the hearts of rabbits and rats”. These were dose dependent variations in the hearts’ maximum upstroke velocity and action potential durations, and “a high incidence of severe arrhythmias and of conduction blocks at the highest concentrations”. The researchers said these “may be explained by the effects of Roundup on action potential parameters” and suggest that they may be occurring as a result of significant blocking of sodium and potassium ions, and to decreased calcium ion influx through the heart’s L-type voltage-dependent calcium ion-channels. They added “In view of the scanty reports in the literature and a high probability of Glyphosate-based herbicide toxic effects inducing death as the consequence of increased arrhythmogeneity, the results of the present study, the first ones assessing in vitro heart electrophysiology in two mammal species, should incite future in depth investigations aimed at detecting human risks”.

Séralini is quoted on his website saying, “Glyphosate alone – the supposed ‘active’ ingredient of Roundup – had no such effects”. The researchers concluded that the mechanism of Roundup toxicity “changes around the critical adjuvants concentration of the unknown surfactant” (added to help get the Glyphosate into plant tissue). Gress and colleagues argue that the nature of the unknown adjuvant’s chemical composition needs to be disclosed, so that investigations can be done on its electrophysiological effects, as well as on the effects from the total Roundup mixture.

Séralini and colleagues have done previous work on the toxicity of adjuvants in herbicides. A 2012 study demonstrated that nine glyphosate-based formulations were actually more toxic than glyphosate alone, and were far from inert. The most toxic of all was a major adjuvant known as polyethoxylated tallowamine (POE-15). He concluded that assessment of Roundup formulations as mixtures was an obvious necessity, rather than just assessing glyphosate in isolation. Earlier this year Séralini assessed the toxicity of 3 herbicides, 3 insecticides, and 3 fungicides, comparing the active principles as well as the entire formulation. He found “Roundup was among the most toxic herbicides and insecticides tested. Most importantly, 8 formulations out of 9 were up to one thousand times more toxic than their active principles”. Also this year, an Argentinian study found toxic effects on human cells from a glyphosate formulation that were not found in glyphosate alone, at dilution levels “far below agricultural recommendations”.

Corporate and regulatory due diligence failures

The widespread planting of Monsanto’s GMO glyphosate-resistant crops —varieties of alfalfa, corn, cotton, canola and sugar beets, have helped to ensure that Roundup products are the most widely used herbicide globally.  To the tune of 650,000 tonnes per year in 2011!  Industry analysts are predicting global use could double by 2017.  Plus the use of Monsanto’s GMO patented seed locks the user into having to apply Roundup to the crops, which is a clever, if terrifying, business model.

On its website, the biotech company states, “Monsanto stands behind the safety of its products, including its Roundup branded herbicides, which have a 30-year history of safe use”. They also describe the use of Roundup as ‘responsible’ and ‘sustainable’, offering ‘environmental protection’. They explain that glyphosate works by disruption of a plant enzyme: EPSP synthase, not present in humans.

But for a start, independent scientists Anthony Samsel and Stephanie Seneff show that, as well as overlooking glyphosate’s ability to inhibit of one of our key liver enzymes —cytochrome P450 (CYP), they have overlooked that the disrupted EPSP synthase ‘plant’ enzyme is very much part of the picture for the gut bacteria on which we depend. They explain that the consequences of this disruption are “most of the diseases and conditions associated with a Western diet, which include gastrointestinal disorders, obesity, diabetes, heart disease, depression, autism, infertility, cancer and Alzheimer’s disease”. And there are plenty of other independent studies on Roundup and glyphosate that call their safety very much into question.

Meanwhile, regulators consider it necessary only to focus on the safety of the ‘active’ ingredient glyphosate, and its permitted residues in crops.  Given the new data regarding the potential for cardiac toxicity, that’s come to light in the Séralini paper, current risk assessment protocols for herbicides and insecticides are woefully inadequate.  The system is flawed from the start and inadequate consideration is being given to the effects of the whole formulation in synergy.

Glyphosate as an active ingredient is already proving to have a costly, toxic impact for humans, animals and the environment.  Albeit a situation in which biotech and the regulators keep turning a blind eye.  However, this new data brings further proof that new and appropriate risk assessment protocols, as well as scientific transparency, are long overdue.  It’s taken over 30 years for this information on the danger posed by the adjuvants to emerge, and only through the persistent efforts of independent scientists like Professor Séralini.  The fact that chemical products carrying a risk of death from poisoning, can be brought to market without a full risk assessment, let alone containing mystery adjuvants, is an expression of the cosy relationship that has long existed between companies like Monsanto and regulators.