During this past week, our South African alliance partner the Traditional and Natural Health Alliance (TNHA) has published a report about a potential new threat to Africa’s traditional and natural health products. The proposed regulatory harmonisation of medicinal products across the whole African continent — 55 states — through a Model Law that was adopted by the Executive Council of the African Union (AU) at their January summit in Addis Ababa, Ethiopia. Together with the establishment of a new African Medicines Agency, this Model Law is intended to override the medicinal laws of the individual African states, thereby smoothing the way for Big Pharma’s sweeping expansion across this 'pharmerging' continent. Sound familiar? It should do to those of us who have lived through the last 13 years in Europe, whilst the most draconian regulatory template over natural medicine ever seen to date, has bedded in and taken full effect.

In December we reported on TNHA’s success in removing the threat to traditional and natural health products that was being posed by South Africa’s Medicines and Related Substances Amendment Bill, recently passed into law (recent amendments appear to be identical to the Articles of the new AU model law). The Bill was rendered toothless for regulating natural health products, but is set to restructure the South African medicines regulator into a clone of the US Food Drug Administration (FDA). However, it appears that this TNHA gain will be short-lived with the new threat emerging from the adoption of the AU Model Law, and the establishment of a continent-wide African Medicines Agency. TNHA say, “In a nutshell, the Model Law has become the supreme law for medicines regulation in Africa”. 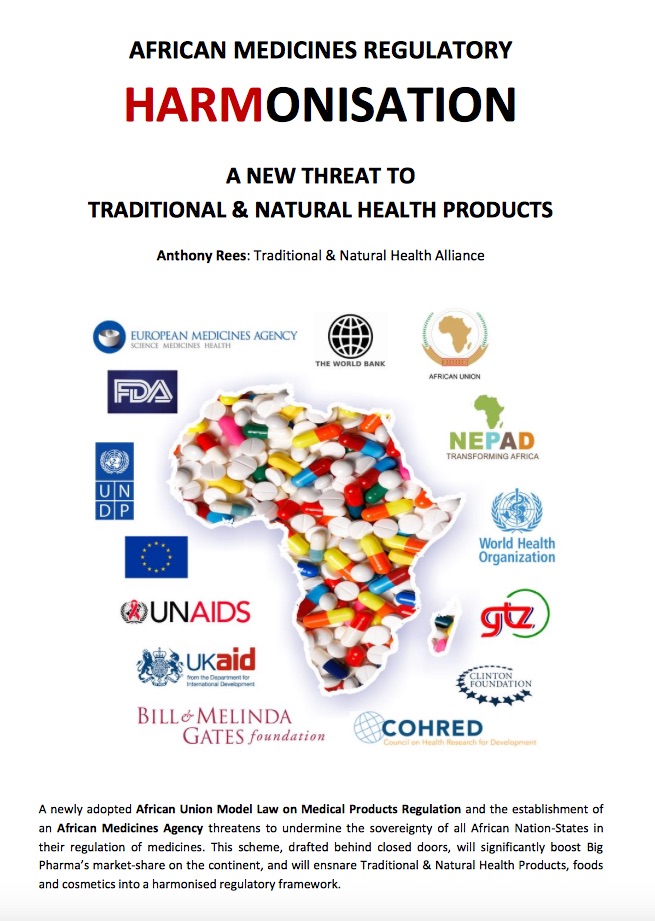 The TNHA report that this new pan African regulatory body will be “run by bureaucrats and staffed by technocrats” trained in South Africa, who will “enable, monitor and enforce” the newly adopted Model Law. TNHA add that the legislation is undemocratic and, like much of EU legislation, has been “drafted behind closed doors”. It will include traditional African and complementary medicine, food and cosmetics. Initiated by the NEPAD Agency and “seed-funded by the Bill and Melinda Gates Foundation to the tune of US $12.5 million dollars”, the harmonisation scheme has been mainly driven by “foreign authorities and multinational organizations tied to some of the biggest novel pharmaceutical drug producing countries”.

Last week we published an article on pharma domination, conflicts of interest and the potential risk pharma’s business model poses to society. With globalisation, trade harmonisation, the establishment of new umbrella regulatory agencies, such as the African Medicines Agency, and the recently formed International Coalition of Medical Regulatory Authorities (ICMRA), the world is more at risk than ever from unsavoury corporate business models that put profits over people.

Whilst it’s difficult to argue rationally against, “improved access to medicines, better public health outcomes and economic growth” for Africa, it is imperative that Africa’s traditional medicinal and health practices be preserved. To those of us who view the world without Big Pharma’s blinkers, it’s clear to see that the agenda here is not one of health, but of corporate profit. If it were about health, then natural and sustainable approaches to healthcare would be included given their popularity, undeniable efficacy and affordability.

The TNHA is investigating and publicising further developments on the Model Law and the regulatory harmonisation for which it’s been developed. TNHA secretary, Anthony Rees, warns that it, “threatens to undermine the sovereignty of all African Nation-States in their regulation of medicines”.

Anyone with friends or relatives in South Africa, please share this story and help Africans to exert their democratic and sovereign rights.

We will continue to support TNHA efforts and actions to enable Africans to maintain their right to access the healthcare modalities of their choice; to access safe, affordable medicines through ethical business models; and to maintain their right to access traditional medicines, that are part of their long-standing heritage and utilised by up to 80% of indigenous populations as primary healthcare.

The Traditional and Natural Health Alliance