Home News Taking responsibility for our own health 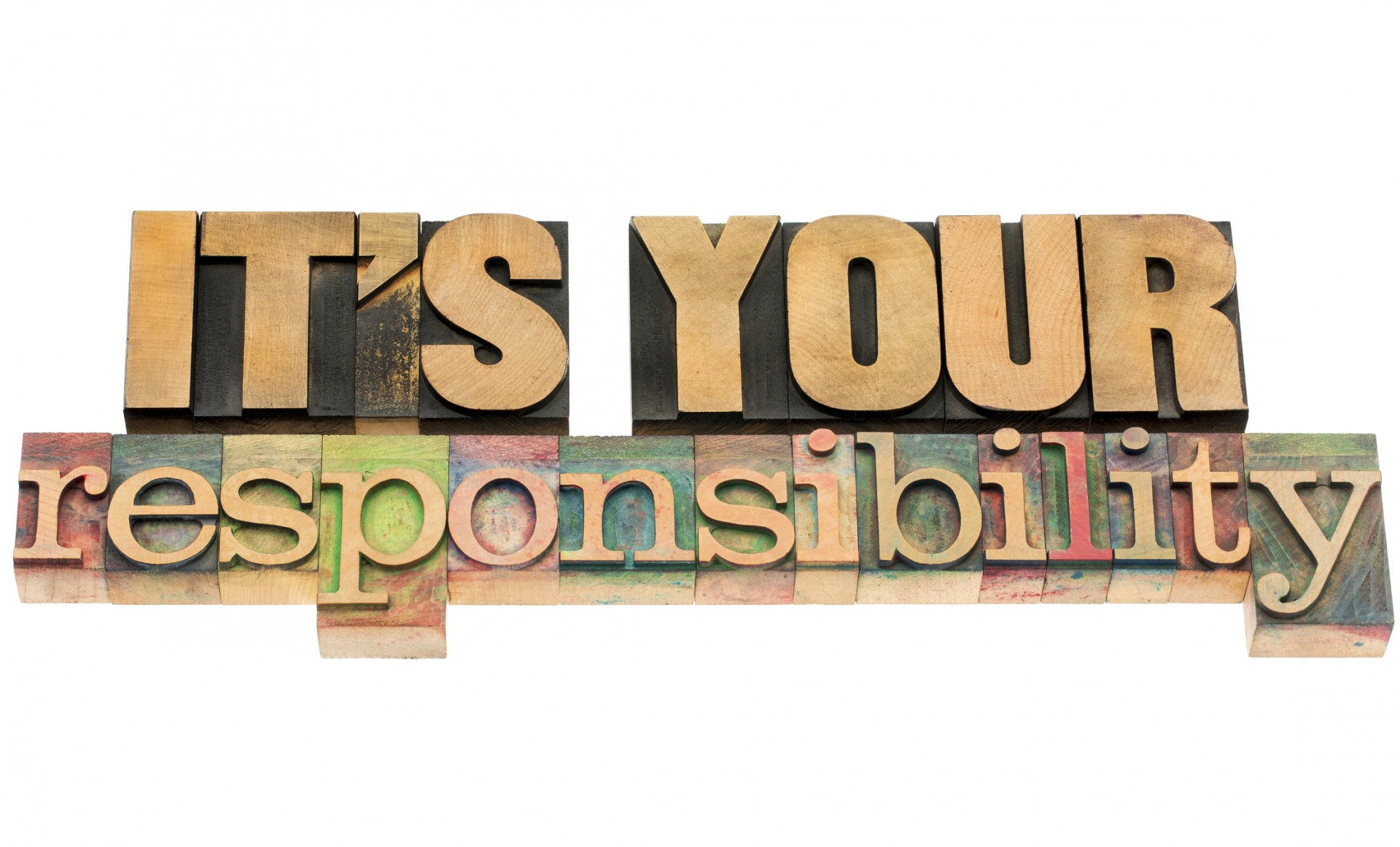 Taking responsibility for our own health

Our survey, “Who’s in the driving seat of your health?” closed at the end of June. At the survey’s closing date, 519 respondents provided us with data on various questions around the issue of self-care and health empowerment. The results, encouragingly, suggest that many are choosing to manage their own health, and to do so rely on information online, rather than consult a healthcare provider, with only a third reliant on a mainstream medical doctor over the last 2 years. These data also suggest that food supplements, herbs or other natural products and remedies are more relevant to our health than pharmaceutical drugs. This begs the question being raised by many, including some notable mainstream doctors themselves: Are people being poorly served by the healthcare system? A system that is struggling to cope with the burden of chronic disease burden, whilst insufficiently addressing the causes and failing to put preventative measures in place? Quite simply, are we being exposed to too much medicine?

Preliminary results in May had already revealed that natural health takes centre stage in many people’s lives, but we were aware that there was likely to have been a strong bias towards all things natural among the early respondents given that they were ANH-Intl supporters, and therefore a self-selective group. As time has progressed the survey has reached a wider audience, which accounts for the leveling out of the results.

Are people poorly served by the Healthcare System/and is quality of healthcare deteriorating? 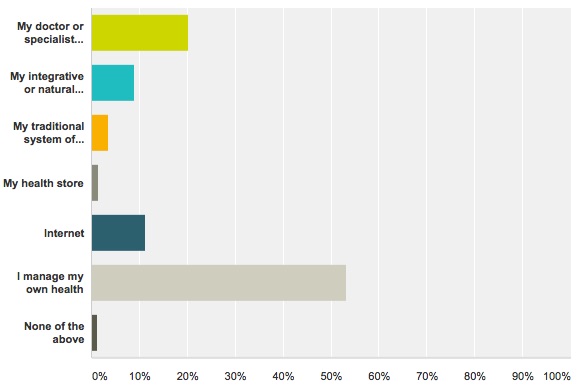 Q: Over the last two years, which one of the following has been the most important guide in your own health management?

Data from our survey suggests that people are choosing other means than mainstream healthcare to manage their health, with 53% of respondents having elected themselves as “their most important guide” in managing their health over the last two years. We question if this is because informed consumers feel poorly served by the Healthcare system or because there is no overt natural health pathway through it? Only about 20% of respondents indicated that their doctor or specialist was their most important guide in their health management during the last two years.

Thirty four percent of respondents said they relied on their regular doctor the most over the last 2 years, to help them manage their health, whilst 31% have not relied on a practitioner’s guidance at all during the last two years and have self-cared. Out of the total respondents, 35% said they hardly ever or never rely on guidance from a health professional, and almost 40% of respondents turn to guidance on the rare occasion.

It’s an important point to note that the Internet is considered an authoritative source that many turn to in the first instance as the most important source of information in the management of their health. Our survey data indicates that over the last two years as many as 62% of survey respondents indicate that they’ve used the web as their first line health portal. This concurs with the high interest in web-based information reported in 2012 by an Accenture survey.

Are mainstream healthcare providers using too much medicine?

One thing is clear. The tide is turning when it comes to a purely drug based Pharma option. As many as 68% of survey respondents are using food supplements, herbs or other natural remedies three or more times each week to help manage health over the last year. And a whopping 43% of respondents said that pharmaceutical drugs are of no importance in the management of their current health, although 23% feel they still have a role to play at certain times.

Self care: How the healthcare system benefits

The Self Care Forum writes of the benefits of self-empowered health management. and the UK National Health Service (NHS) states that, “More cost-effective use of stretched NHS resources allows money to be spent where it’s most needed and improve health outcomes. Furthermore, increased personal responsibility around healthcare helps improve people’s health and wellbeing and better manage long-term conditions when they do develop. This will ultimately ensure the long-term sustainability of the NHS”

Whilst the NHS recognises that that only way to ensure long-term sustainability is to foster more self-care and enhanced focus on preventative healthcare strategies, it’s sobering to see that only 5% of doctors have been rated as ‘open’ to natural health and 15% as ‘fairly open’. Disconcertingly, 26% of doctors have been rated as ‘resistant’ or ‘fairly resistant’. And even more disconcertingly, 38% of respondents haven’t even broached the subject so don’t know if their doctors would be supportive or not. We hope that the work of forward thinking, open, doctors like Dr Rangan Chatterjee and Dr Rupy Aujla is signaling the much needed turning of the tide.

Hands off our data!

Last but very definitely not least is that 87% of respondents feel that their health data is theirs and theirs alone. That’s a pretty unequivocal view that no one, not the NHS, not Big Pharma, and definitely not companies like Google, Boots pharmacies or supermarkets like Tesco should have access to personal health data. We couldn’t agree more. It should be a basic human right that allows every individual to choose with whom they share such sensitive and personal data. Given how strongly people feel about this, we see this as a real needle mover in the shift to more empowered self care. 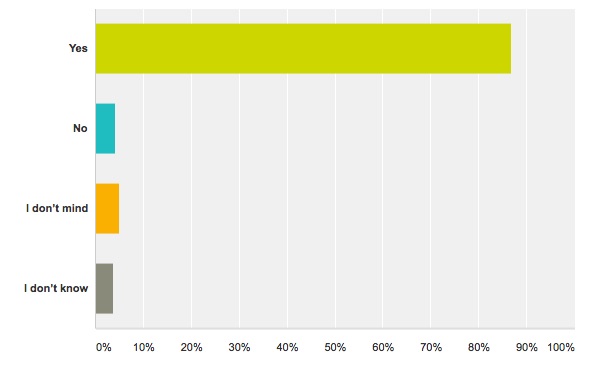 Q: Do you feel that you should have sole access to your own health data (unless you choose to share it with others), and that your data should not be automatically accessible to companies like Google?

And here’s another reason why…

Nanette’s story of self care

We provide below a link to a broadcast that has just been released on Robin Daly’s show on UK Health Radio, where Nanette McLeod-Johnson recounts her extraordinary journey for both herself and her children. Emotions range between despair over abandonment, neglect and misunderstanding by elements of the orthodox medical profession to self-discovery about the origin and basis of her, and her children’s, health challenges. Like all good stories, this has a happy ending too — one that not only restores Nanette’s health, but also her joie de vivre and vitality. Self care rocks! Thanks Nanette for sharing.

Nanette McLeod-Johnson - Before her illness 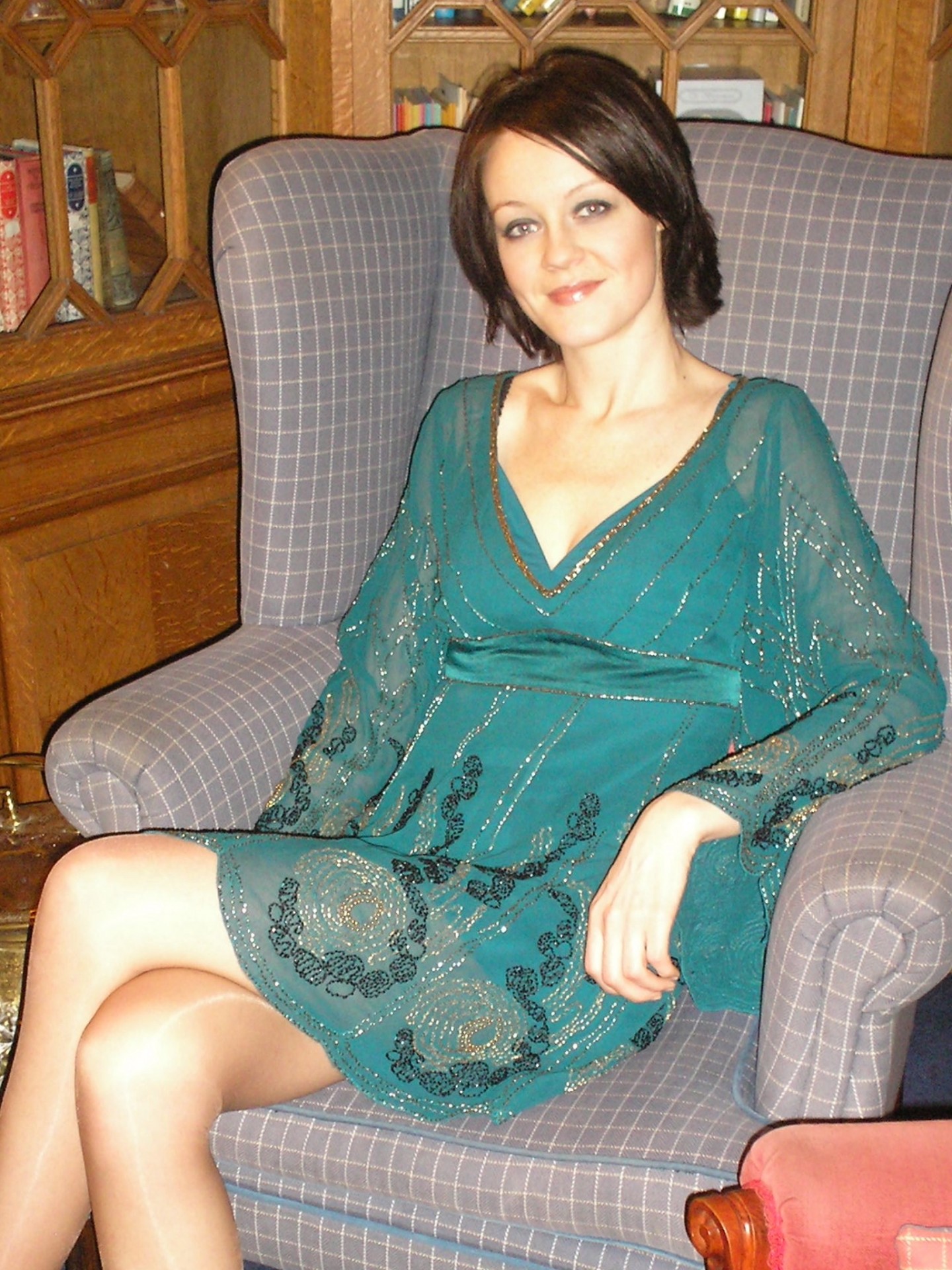 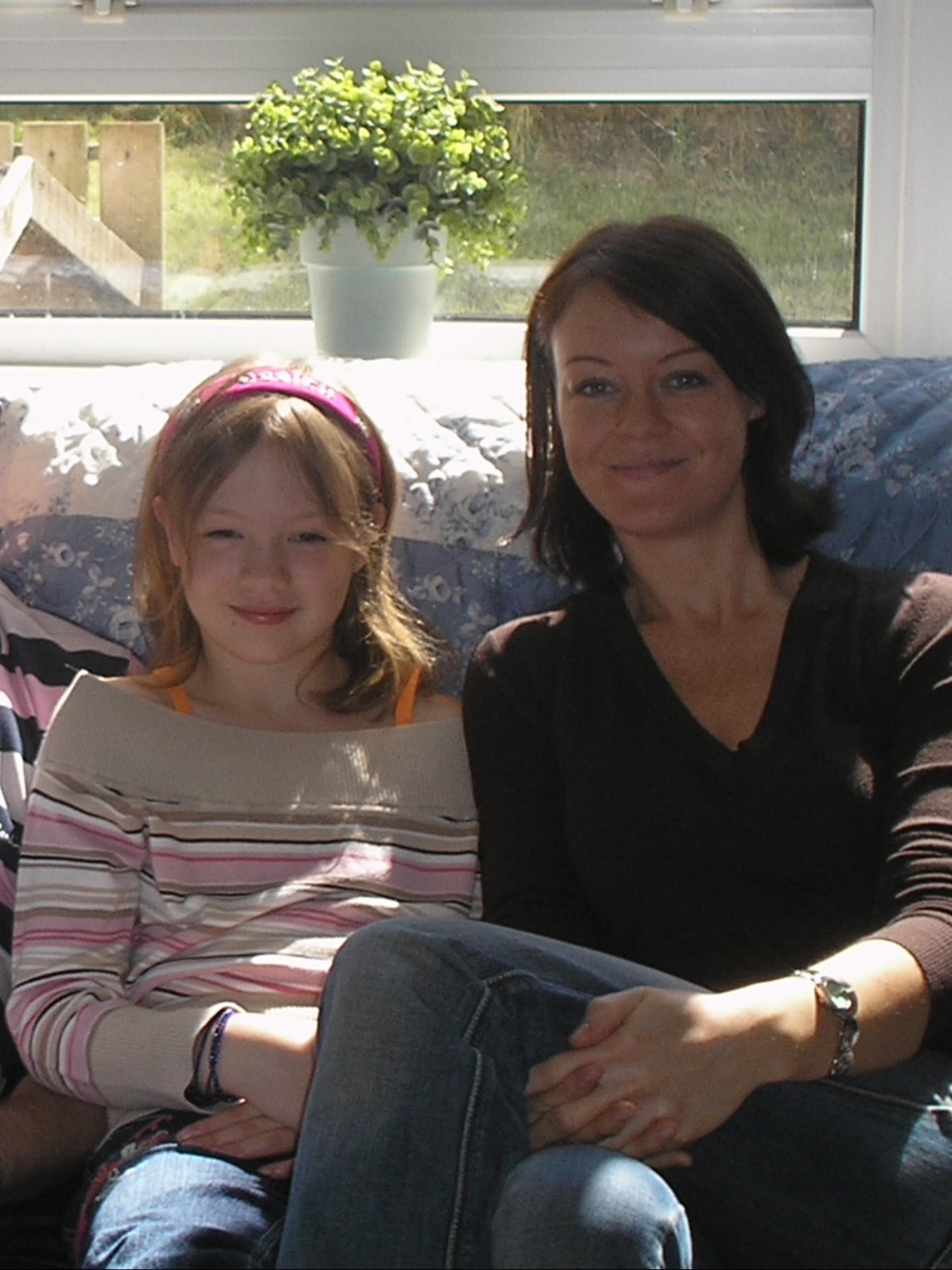 Nanette McLeod-Johnson - During her illness 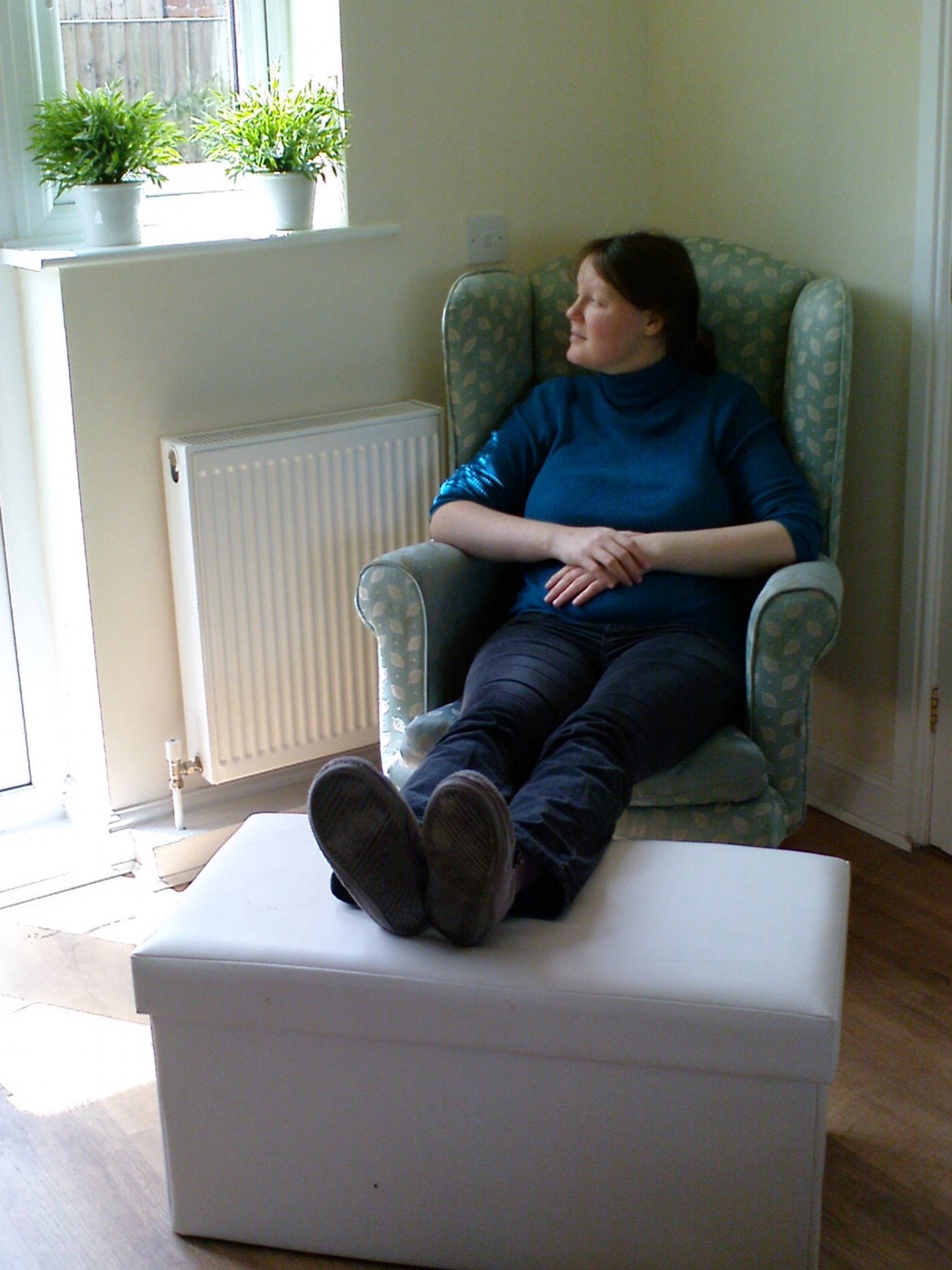 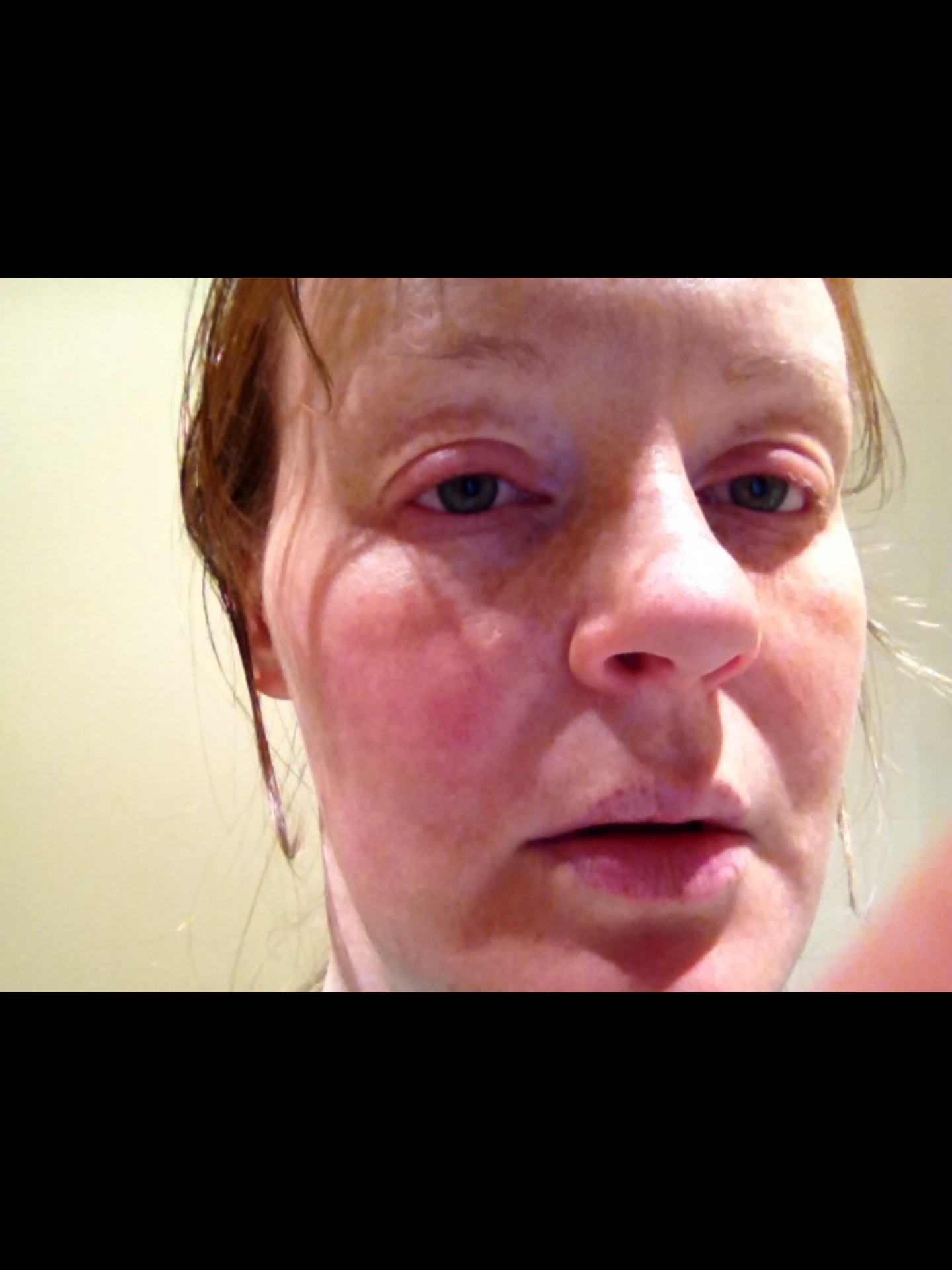 Nanette McLeod-Johnson - After taking responsibility for her own health 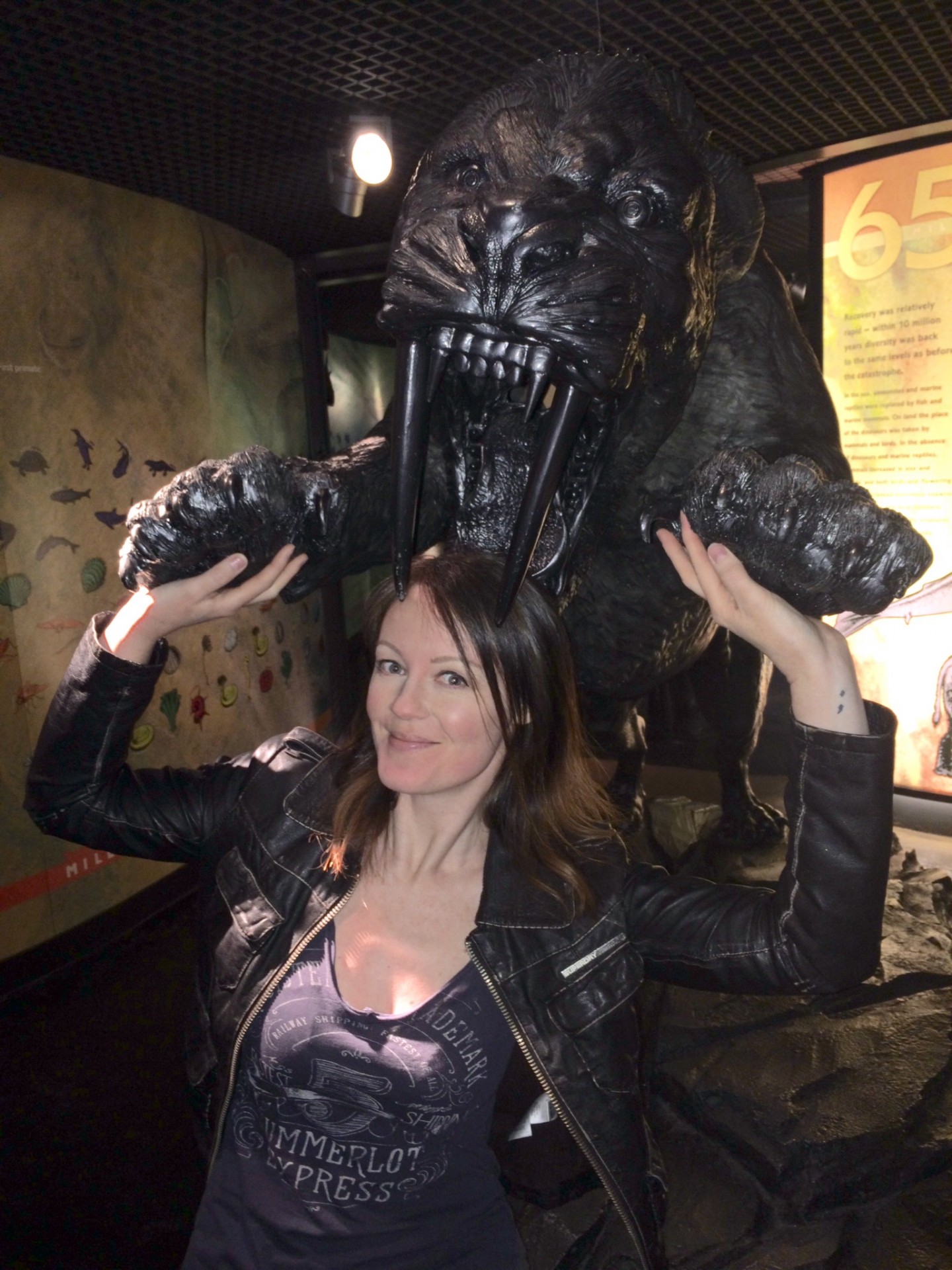