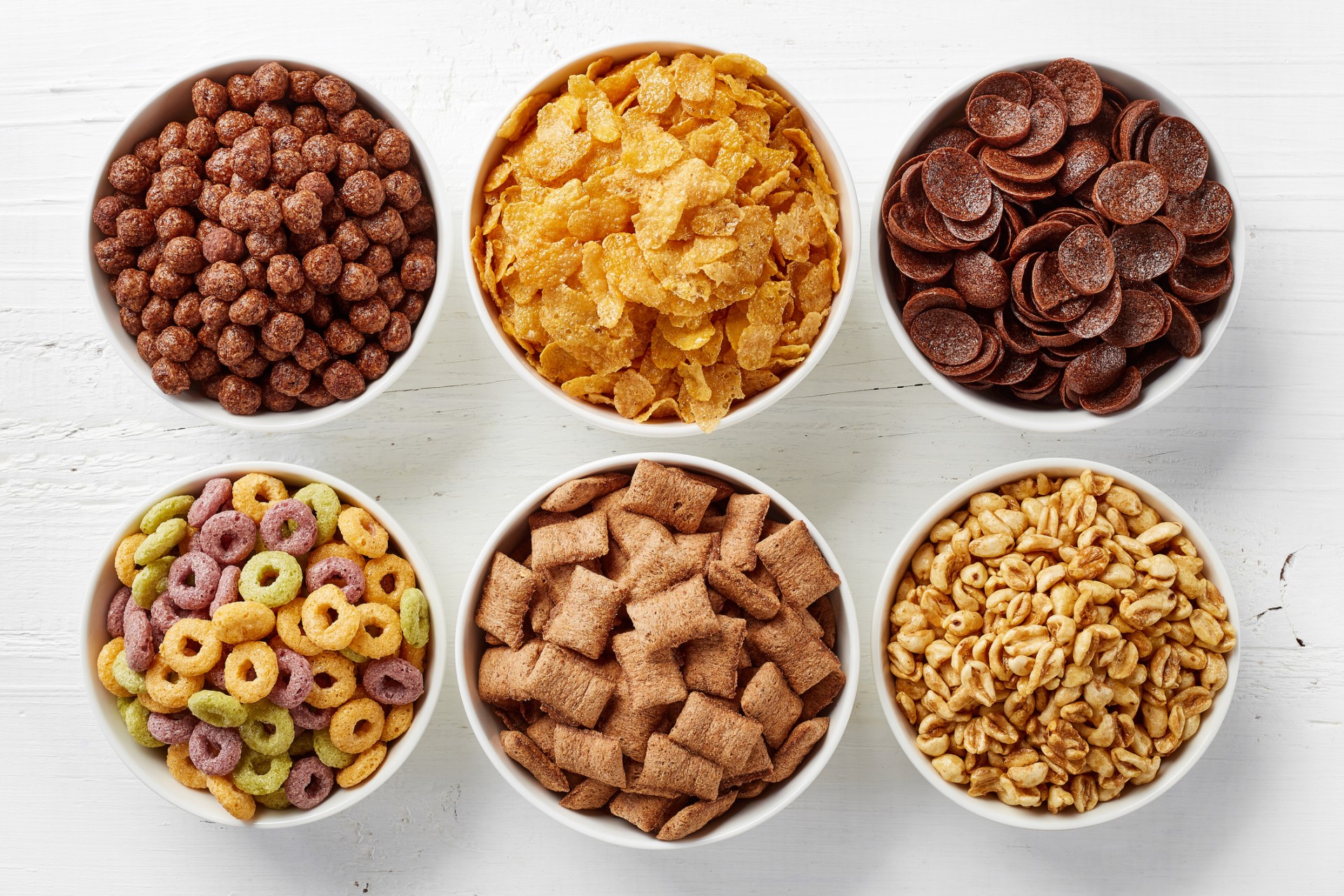 Big Food is a bigger problem than sugar for kids

It's not just the sugar in our food causing problems, it's the way it's processed

Sugar has again hit the headlines, with disturbing figures from Public Health England (PHE) showing that children in the UK are eating half their daily recommended sugar intake at breakfast before they even get to school.

Kids are eating too much sugar

The PHE/Netmums survey found that kids aged 4 to 10 years are eating up to 50% more than the daily recommended limit of 10% of a person's daily energy intake. Change4Life recommends 'simple' sugar swaps but we say that these are only a small part of the overall health solution needed.

A major contributor to the increase in sugar consumption and addiction is the introduction of and reliance on, processed foods and sugar sweetened beverages along with the shift away from unprocessed home cooked foods using natural ingredients. This sugar drive seriously got into gear in the post-WWII period following the deprivation of the war years. As prices for refined sugar grew following the war, new sources were looked for which saw the introduction of cheap High Fructose Corn Syrup in the 1970s. We then saw a higher proportion of mums going back to work and strong demand for easy, convenient food options. This triggered the increased availability of highly processed foods and the beginnings of the current health crisis with Big Food square and centre as the originator of the foods that cause the bulk of the disease burden in contemporary, Western societies.

The drive by Big Food towards sugar and processed foods as seen in advertising from the 1950s and ‘60s with its emphasis on the supposed 'health' benefits of sugar shows clearly just how calculated the approach to sugar addiction has been.

Here are a few examples that show just how young the targets of sugar advertising were in the post-WW II period – as well as how unashamed the ‘educational tone’ was: 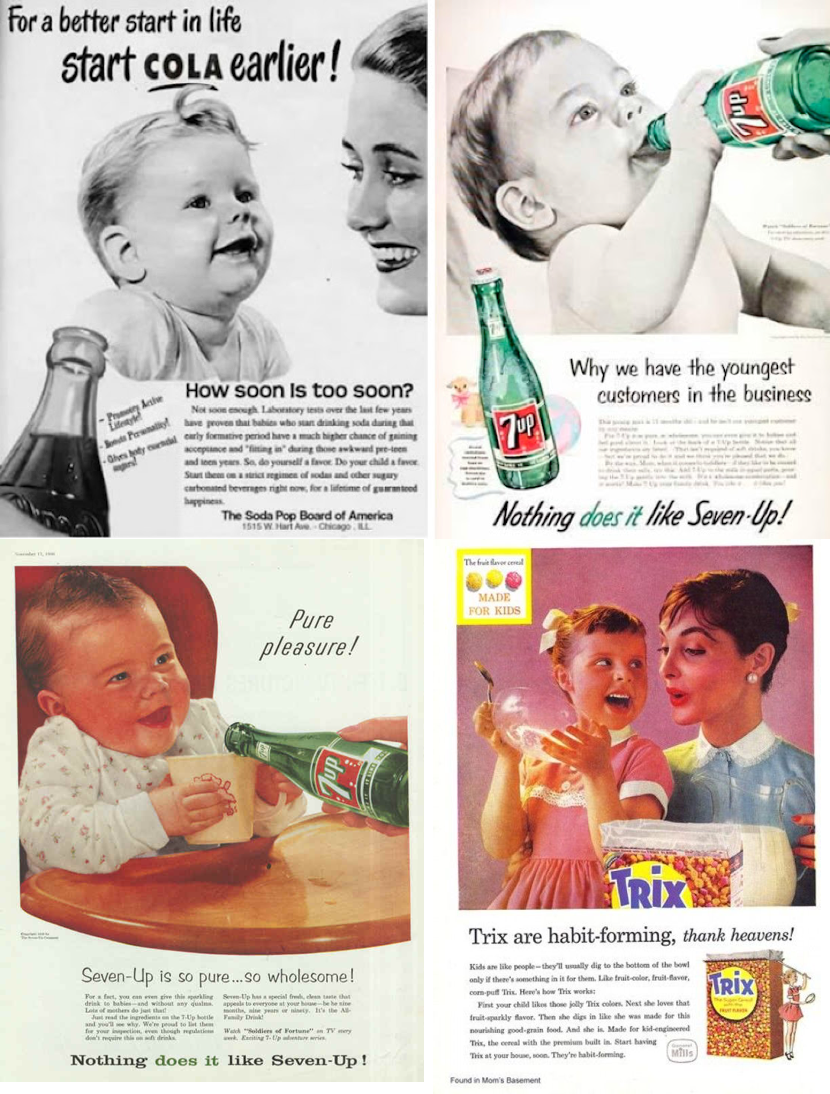 The reality of what people were eating was a little different with suggested breakfasts of scrambled eggs, bacon and tomatoes, fish cakes, grilled bacon and potato slices, porridge, boiled eggs and kippers, all much more sustaining and nutritious!

Imagine if ads were like this today...... Actually, it’s not as different as one might think. While it might be less brazen, it may actually be more insidious. Check out the following as modern day examples:

Fruit Loops sold in the USA contain trivial amounts of fruits in powdered form. Worse than this, some variants are labelled as ‘wholegrain’ which is seen as healthy, yet consumers are not told that the wholegrains are so highly processed they create more or less the same blood sugar response as pure sugar. This is not just our opinion, but that of the world’s foremost glycaemic index/load researcher, Professor Jennie Brand-Miller from Sydney University.

Coca-Cola no longer targets very young children (or their parents) directly. But it does it indirectly, using celebrity endorsement to convey that those the young look to as role models, such as Taylor Swift, are associated with the beverage (we've used links to images so as not to infringe copyright).

Given what we know about the science of sugar and highly processed cereals, the following is what we think modern day educational advertisements should look like. We’ll be pushing these out via social media and we’re looking for your help in getting these to a much wider public. 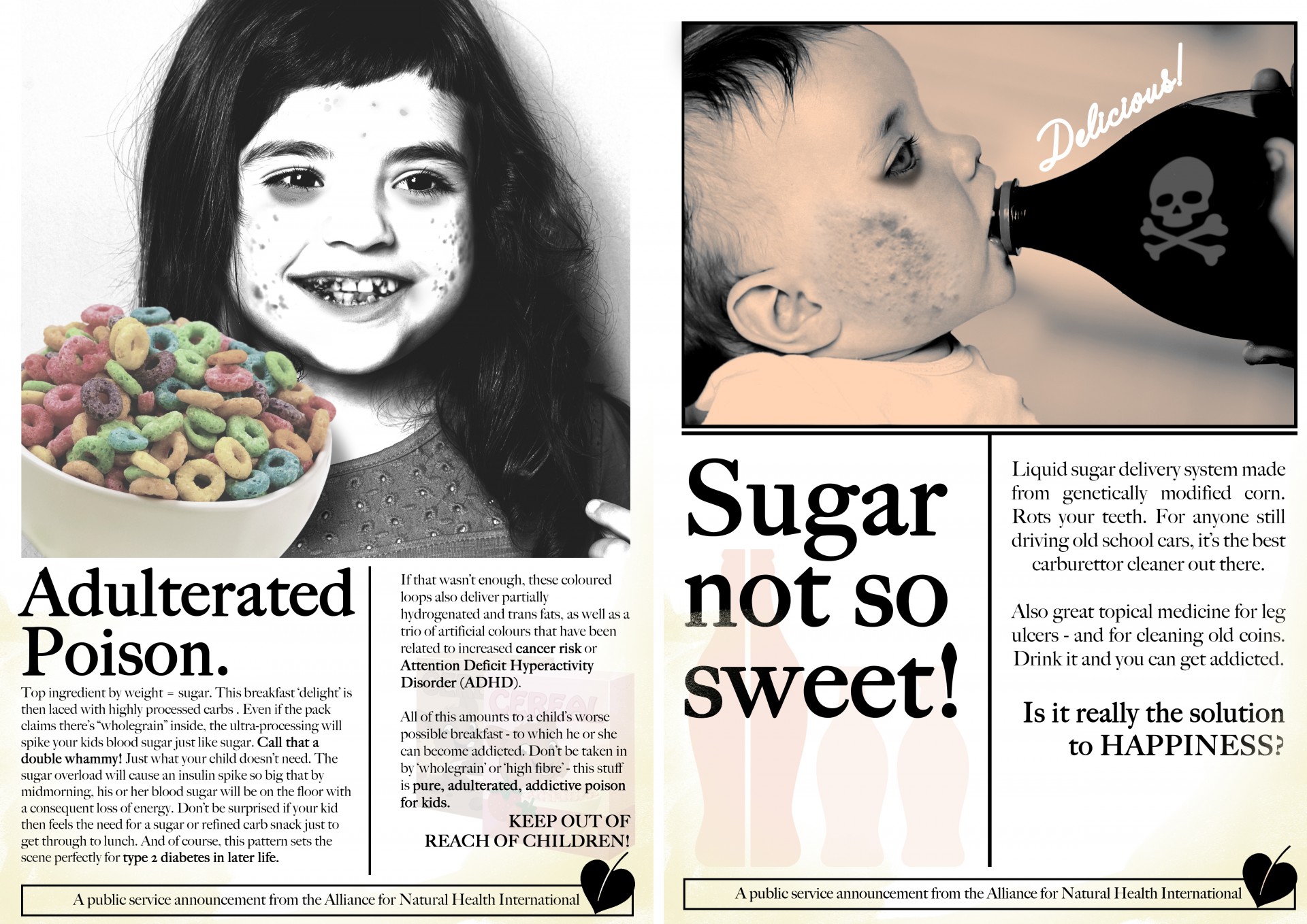 Sugar is only a part of the problem

Whilst there is more and more recognition that sugar is central to the current issue, as always, it’s a vast over-simplification. More than this, if we only focus on sugar, and we continue to focus on limited other so-called problem ingredients like salt and saturated fat, as a society we’ll have little or no impact on the growing chronic disease crisis. Eating energy dense rather than nutrient dense foods, such as processed breakfast cereals that are both high in sugar and highly processed carbohydrates (even wholegrain ones), means that kids are not getting the right balance of macronutrients (protein, carbohydrates and healthy fats) and micronutrients (vitamins, minerals and plant-derived nutrients) they need to grow and develop properly.

The more balanced and varied breakfast recommendations of the ‘50s and ‘60s were rapidly replaced with the easy option of sugar-laden breakfast cereals that didn't require any cooking or preparation time. Like today, if the cereals weren’t already sugared, a sugar bowl was always close at hand!

We have been told for decades, Kellogg’s being one of the main protagonists of this view, that breakfast is a child’s most important meal. High glycaemic load (GL), highly processed foods devoid of nutrients create a spike in blood sugar, an increase in insulin levels followed by a sharp drop in blood sugar levels leading to tiredness, lack of concentration and sugar cravings.

We developed the ANH Food4Health Children's Guidelines to provide information about the balance of nutrients that children require during critical stages of their growth and development – and cutting down on sugar, saturated fat and salt – the key premise of the UK government’s Change4Life campaign, just won’t make much of a difference! What’s more, the real villains in the piece, Big Food, will be left to continue to deliver its highly processed foods that are at the heart (pun intended) of the problem.

As part of the Change4Life campaign PHE has introduced the Be Food Smart app to help parents and kids to check how healthy the food they're buying is. Whilst the concept is a good one, the app fails because it only considers sugar, salt and saturated fat content of food. Put simply, the app remains in the ‘dark ages’ of nutritional science and fails to take into account the importance of key factors such as macronutrient and micronutrient balance, or nutrient density and diversity. It doesn’t consider any of the good or beneficial nutrients in a food and doesn’t differentiate between nutrient dense and energy dense foods. This leaves the consumer to make a choice of whether or not to buy the food allowing for them to continue to make unhealthy choices.

Let’s give you an example. We scanned a bottle of extra virgin olive oil sold through a major supermarket chain. The app gave it a thumbs down by providing an off-putting moving graphic of dolloping fat and a red light for the supposedly high saturated fat content (14g/100 ml). The app did not take account of the fact that olive oil also contains high levels of monounsaturated fats (70g monounstaurated fat/ 100ml) and a child may not indulge in more than one or two tablespoons of the stuff in a day. This represents a very healthy fat intake! Butter was similarly given a bad rap for its high saturated fat content. Let Zoë Harcombe PhD explain why saturated fat doesn’t cause heart disease.

How can you feed your kids better in the morning?

Let’s get down to some solutions.

Cereals for breakfast found favour because they’re so convenient. But there are ways of eating healthy gluten-free cereals. There are also other options – and enough to create real variations in a child’s diet.

To help those with young kids, we've put together some recipe ideas for you to try that are quick, easy and healthful. The recipes cover 5 main gluten-free breakfast styles: cereals, porridge/oatmeal based, fruit based, egg based and bread based. 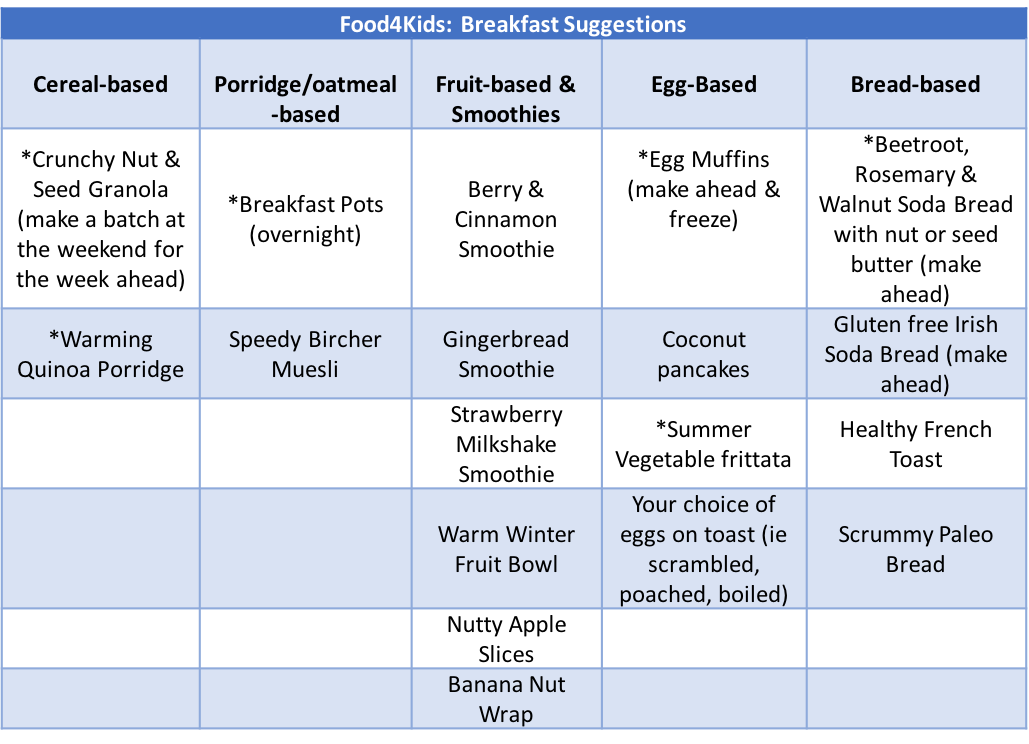 * With our sincere thanks to Amelia Freer FdSc, Dip ION, author of "Cook. Nourish. Glow." for her recipe contributions.

The real problem we have with kid’s breakfasts is the wide acceptance of readily available, highly processed, refined, high sugar, low-nutrient density and diversity, convenience foods and the continued influence of Big Food in the design of Government Eating Guidelines. At the end of the day, where's the profit if we were all to turn to unprocessed foods! Although it takes a little more time, providing healthy options for your family is actually not as inconvenient or difficult as you may think. It just requires a little organisation and forward planning whilst involving the kids can teach them good habits to keep them healthy through their life as well as improving their compliance with the changes you make.