Home News The NHS is broke and will Brexit provide the best opportunity for fixing it? 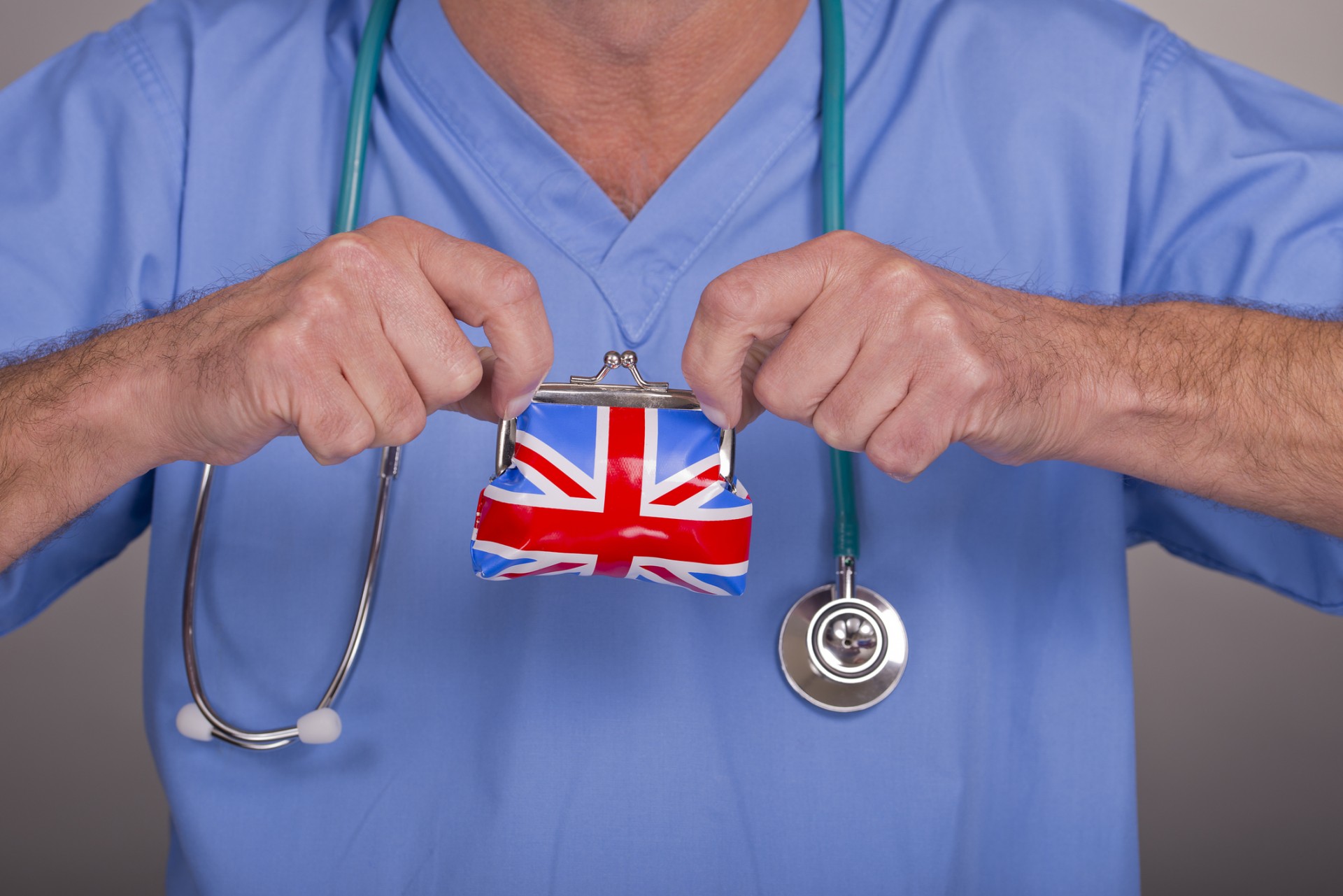 The NHS is broke and will Brexit provide the best opportunity for fixing it?

Will pouring more money into the NHS really fix it? We look at other solutions, including full-scale shift in how society in Britain could better manage its health

Whilst the NHS still tops the poll of what makes people most proud to be British, and remains the ‘jewel in the UK’s welfare crown', it is somewhat ironic that that the NHS, despite its remarkable history and it being probably the world’s fifth largest employer, is splitting at the seams and may be close to collapse.

Both Derek Wanless back in 2002 and more recently, The King’s Fund described the NHS as a ‘disease management service’, which was on a financial cliff edge, and needed very substantial increases in resources for health and social care. The NHS spends billions of pounds a year on prescribed medicines which was criticised in a House of Commons Health Committee report, which described the Department of Health as, “unable to prioritise the interests of patients and public health over the interests of the pharmaceutical industry.”

More money or time for change?

Just to keep this near-broken service going will require increases in taxation, or more of the proceeds of growth to fund it; one idea would be to extend national insurance for people over 65, as life expectancy is now over 80!

The House of Lords Select Committee on the Long-term Sustainability of the NHS has been meeting with experts to gather evidence on how to secure a long-term future for healthcare. While, many of the experts presenting to the committee have called for a paradigm shift to take place to save the NHS, it’s unlikely given past performance that these will involve the kind of sea change that is really needed if the system is to be fixed from the ground up, which should also involve taking drastic action to take pressure off it. That means dealing with disease prevention outside the healthcare system itself, not focusing only on disease management within it.

Demand for the NHS is rising, but satisfaction with it is falling! The increasing elderly population living between 12 and 20 years with disability is starting to overwhelm the NHS, so do we throw more money at this disease management system or does British society warrant a completely new approach to healthcare. It is also possible that the British public’s vote for Brexit in June last year provides the ideal timing to make these changes. That’s our view and is a central part of the strategy with which we’re working at ANH-Intl this year.

Any solution to the challenges faced by the NHS monolith involves looking as much outside the NHS as inside it — and reducing demand for its services. For too long the public has been misled by scientists, the food industry, the Department of Health and other health authorities, and it’s imperative that we move from a diseases care model to a disease preventation, wellness-based and individualised approach where each person is responsible for his or her own healthcare, with a full range of healthcare options available.

Central to this approach is increasing effective self-care, natural health and getting individuals directly engaged in their own healthcare. Education is key, but is not enough on its own. We have to ‘up our game’ on obesity, and develop a more realistic consensus over what the real underlying causes are of today’s still escalating incidence of chronic disease and mental health issues. Lord McColl of Dulwich argues that we should hold no punches and spell out the risks like the public information film on AIDS in 1986. 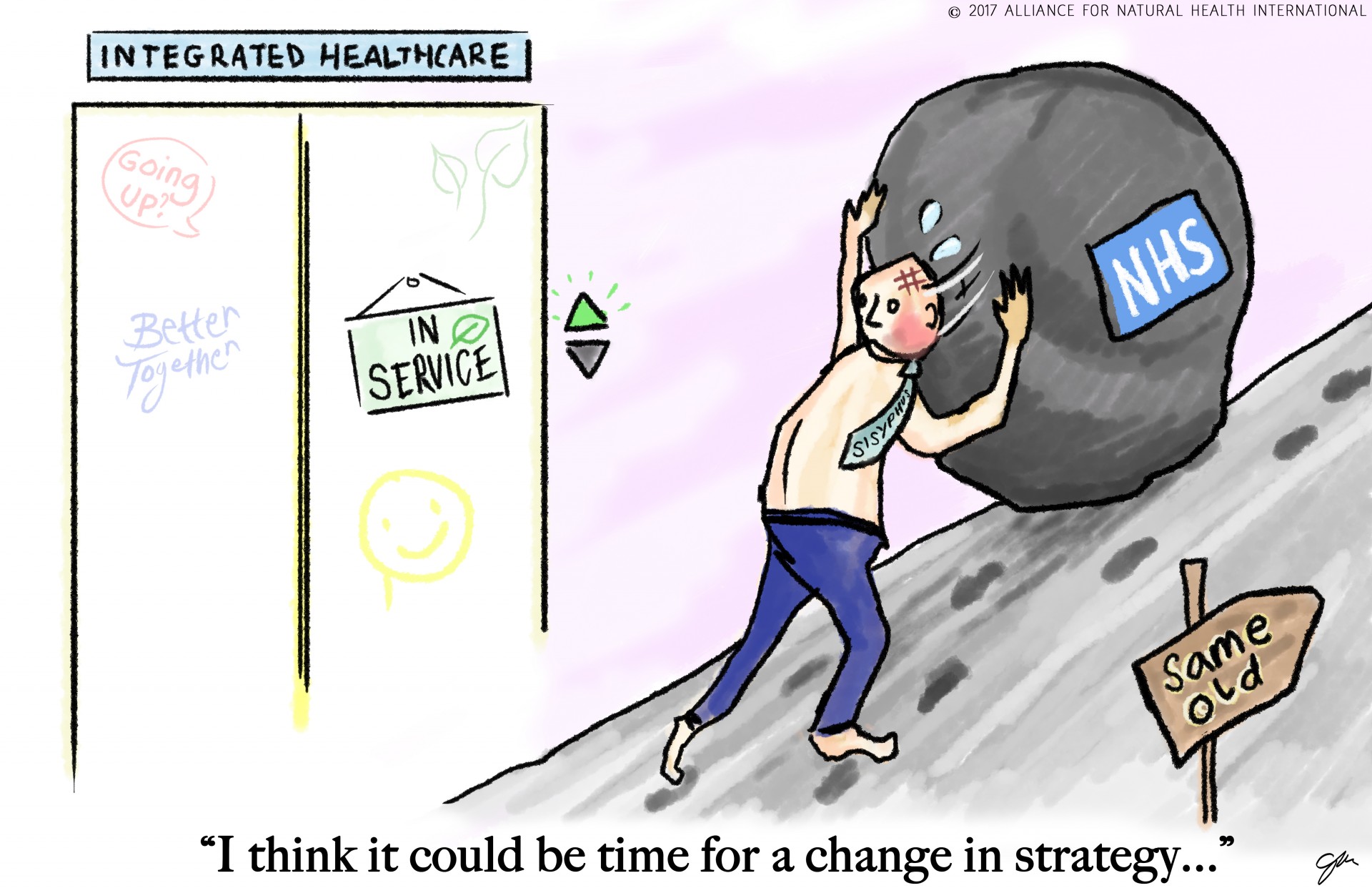 Fix it if it’s broke

We need a community based healthcare system that can help guide as many as people as possible, encouraging them to make the right choices to optimise their wellness. As it happens, this healthcare workforce is ready and waiting – it’s just dramatically under-utilised and marginalised by the mainstream healthcare system and the government authorities that support the pharmaceutical industry, seen as major contributor to the economy. But that’s only if you don’t measure the societal cost of long-term chronic disease and the decreasing age of disability as people succumb to an ever broader array of chronic diseases and mental health problems.

In the UK, it’s estimated that around 9 million people use some kind of complementary or alternative medicine (CAM) and in the EU generally there are around 328,000 registered CAM providers made up of about 178,000 non-medical practitioners and 150,000 medical doctors.

There’s a real need for better integration of these forms of healthcare into mainstream offerings, something that is more common practice in Germany and France than it is in the UK.

We need a lot more doctors like Rangan Chatterjee who has demonstrated on BBC TV that the ‘scourge’ of type 2 diabetes doesn't require metformin or other drugs, and can be reversed in 30 days through a change in diet and lifestyle. As Dr Chatterjee forcefully explains in his TEDx in Liverpool UK, we need to “make diseases disappear” or at least get to them earlier in their cycle.

Individuals would be further empowered to take care of their health by using technology. Engaging individuals in their personal health journey using mobile apps will allow that individual to use his or her own health data to support positive behaviour change. Increasing ‘patient activation levels’, meaning that an individual makes informed health choices and manages their medical conditions, considerably lowers overall care costs. This is another project we at ANH-Intl are involved in with an international collaboration.

ANH International is making this happen

At ANH-Intl, we’re working hard to help bring about the greatly needed paradigm shift in healthcare. We’re doing this is by getting broad consensus and meeting the huge need for healthcare choice and natural health among the public, and one of the ways is through our work with the All-Party Parliamentary Group on Integrated Healthcare chaired by David Tredinnick MP for Bosworth.

In a partnership with integrative cancer care charity Yes to Life, ANH-Intl brought together in London 10 healthcare thought-leaders from around the world under the banner Nuhealth2. These doctors, researchers and health experts were tasked with finding fresh ways to resolve the deepening crisis in mainstream healthcare. All of this is being brought together in a single position paper that will form the basis of our strategy moving forward.

Call to action for UK citizens