Home News Crunch time for US supplements in the EU?

Crunch time for US supplements in the EU?

Micronutrients are the goodies in foods that don’t directly provide energy for our body like carbs, fats and protein. Instead, they provide vital and essential information to a plethora of metabolic pathways and processes which fundamentally affect our level of health and resilience.

Based on national surveys of dietary intake, there’s a deficiency crisis out there. That’s when you measure deficiency in terms of failure to meet the Recommended Nutrient Intake (RNI), which is the level required to prevent vitamin deficiency diseases and conditions like beriberi (B1 deficiency), pellagra (niacin deficiency) or rickets (vitamin D deficiency). 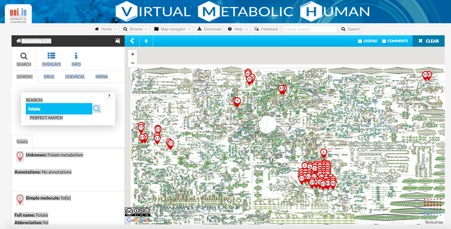 multiple (~70) targets for folate in the human body.

A huge tract of evidence shows that all vitamins have benefits that extend well beyond these minimum thresholds. At ANH, we’re building a database that amounts to hundreds of quality studies of this published research showing clear benefits at levels well in excess of, not only RNIs, but also the higher NRV (Nutrient Reference Values, formerly referred to as Recommended Daily Allowances or RDAs).

We’re also studying the micronutritional intakes associated with very high quality diets – ones we know are associated with lower risks of degenerative disease, longer disease-free life spans and optimal health and resilience. You can’t help feeling the public, dieticians and nutritionists have long been duped by the notion of ‘micronutrient adequacy’ – which has precious little to do with optimal intake requirements for different individuals.

The UK National Diet and Nutrition Survey is one of the most thorough in the world. The US National Health and Nutrition Examination Survey is very similar in its approach and also pretty comprehensive within the limits of self-reporting intakes and then studying nutritional levels in blood samples.

Both surveys show disconcertingly low intakes – that still don’t hit the ‘inadequate dietary requirements’ (IDRs?) agreed by the national authorities. But the real issue is the gaping nutritional gap between average intakes and those levels that are actually needed for optimal health. You have to ask: do the authorities spend much time considering the fact that ‘average people’ present the greatest burden of preventable disease on our healthcare systems. 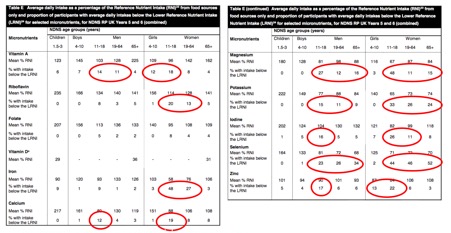 population percentages greater than 10% with intakes below the Reference Nutrient Intake (RNI).

So what’s the answer? Eat more high quality foods, especially plant-based ones? Supplements? We think the answer is both. We’ve long argued that the globalisation of the human food supply and associated agricultural intensification has made supplementation not just an option, but an evolutionary adaptation to the diminished quality of our diets.

With EU-wide plans to harmonise maximum levels now on the back-burner – possibly forever – national authorities are ‘going it alone’. France, Belgium and Netherlands are among the front runners taking action and pulling products off the shelves.

The European Court has intervened on several occasions, most recently in France, to prevent national authorities being overly restrictive and interfering with the function of the single EU market, which is after all nothing less than a Treaty obligation.

The big and bad news for those of us working to prevent unnecessary restrictions on freedom of choice for natural healthcare is when a country with a liberal tradition starts limiting intakes by regulatory means. The spotlight now needs to move to the Netherlands and its proposed action on vitamin B6 that has been in the pipeline some time.

As we’ve indicated before, crackdowns on vitamin B6 and vitamin D are in process. These are being challenged in national courts and we’re hoping to provide new evidence for the Courts based on risk/benefit analysis using the TNO model we commissioned.

The maximum for Belgium set at 6 mg by recent passage of a Royal Decree is staggeringly low.

Fortunately it’s not all bad. Maximum levels tolerated in some Member States are being relaxed, with Italy having revised upwards maximum levels for vitamin D (10 to 25 mcg/d), B6 (6 to 9.5 mg) and iron (21 to 30 mg). The vitamin B6 and D maximum levels are still pitifully low; at least 5 times lower than the risk/benefit science might suggest. This relaxation of vitamin levels in Italy has happened alongside further expansion of its list of permitted botanicals which now contains around 1200 species of plants. Italian authorities, however, haven’t fully caught up with European Court of Justice case law, with an unnecessarily restrictive approach to vitamin B12 which still focuses on adequacy despite the Court having ruled that limitations on dosages can only be made on the basis of risk.

Repurposing the RASFF to protect pharma

When it comes to crackdowns, it’s becoming clear that improved communications between national authorities is a key mechanism for regulating products within the EU single market. Don't be fooled into thinking this has much to do with protecting public health or the environment. It’s centrally to do with protecting big business interests, particularly in pharma companies. The European Medicines Agency (EMA) champions this approach. With Amsterdam successfully winning the bid to be the new home of the EMA post-Brexit, it seems unlikely that the liberal approach to high dose nutrients will survive, at least without a fight. The restriction of the maximum level of vitamin B6 to just 21mg/day that is proposed to start as of April Fool’s Day (who decided that?!) 2018 might just be the thin of the wedge.

Part of the process of getting natural health products off shelves is to get them listed on the European Commission’s Food and Feed Safety Alert (RASFF) system. This has been a prime way of drawing national and local authorities’ attention to herbal products they consider may pose a risk to health. Invariably the science is fudged and the alert is linked much more to the product posing a threat to the pharmaceutical industry’s business model. This has been a big driver for the current attacks on Hoodia gordonii (for slimming and hence targeting obesity) and horny goat weed (Epimedium grandifolium) (used to support libido, hence competing with Viagra and its relatives). These were two of the herbs that were targeted as part of a Commission Regulation on internet sales that went into overdrive in September this year.

During our tracking of RASFF alerts we’ve seen alerts for food supplement products containing these two herbs skyrocketing. That’s particularly for ones originating from the USA. Not only that, the system’s being used to target vitamins, including vitamins containing vitamin B6 at levels higher than the paltry levels considered maxima by the likes of France, Belgium, Italy – and likely soon — the Netherlands.

An example of a recent alert (16 November 2017) originating from France is a vitamin supplement with levels of 3320 mcg vitamin A, 98.6 mg vitamin B6 and 303 mg of vitamin E. The US product has now been pulled from the market in both France and Belgium. For a significant number of people, this is exactly the kind of product that might really allow a person to regain health – but to the bean-counters in regulatory authorities – this product is considered ‘dangerous’. That’s a decision made with no direct evidence of it causing any harm in the USA where the product sells freely, and strenuously ignoring its benefits or why a company might see fit to import it for use by nutrient-deprived French men and women.

We’ve collated the RASFF alerts for food supplements via the RASFF portal in the figure below. Skyrocketing rates since September is no exaggeration. 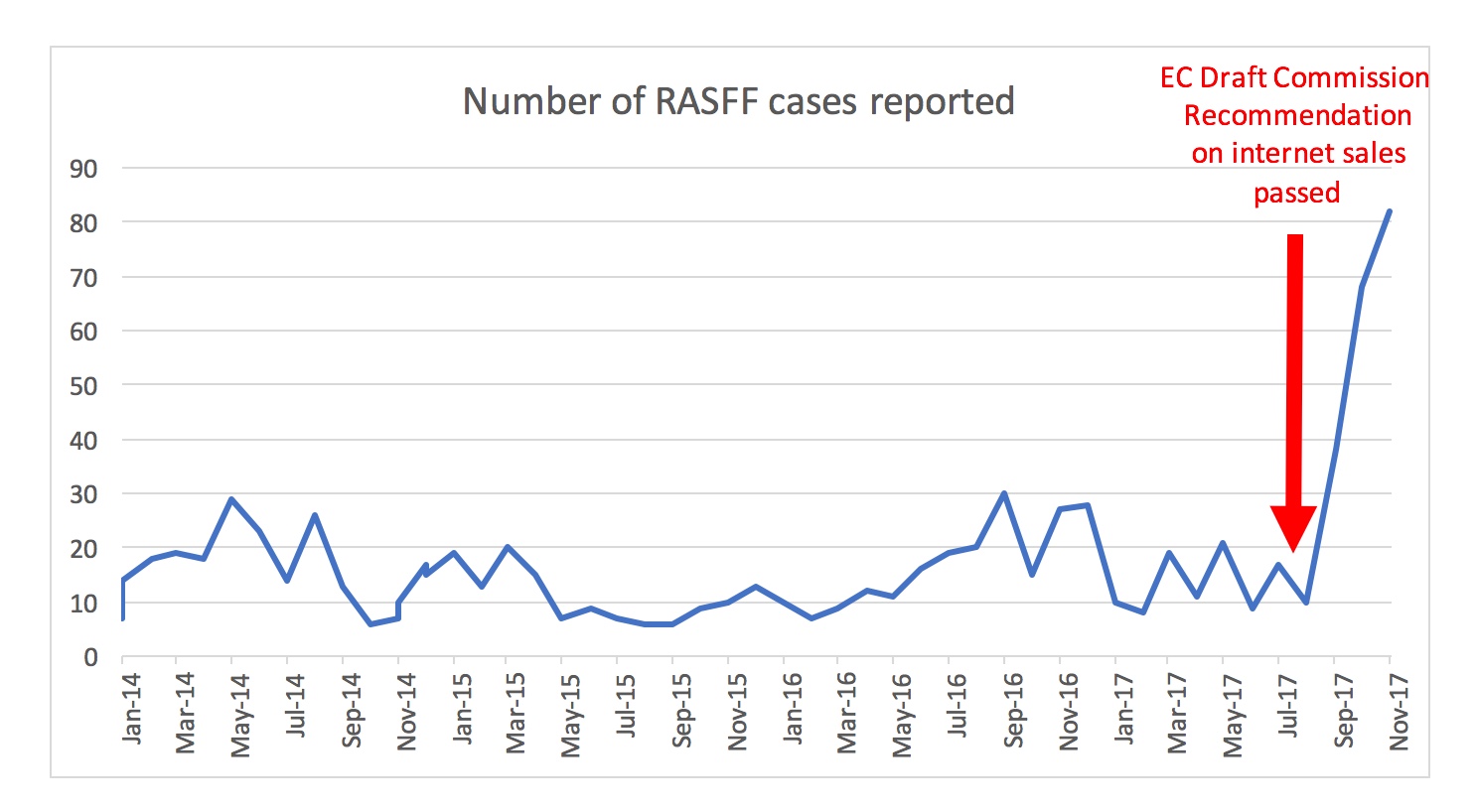 Most of these recent alerts relate to products selling safely in the USA. In the case of the herbs, the most common red flag generating the alert is to do with the herb being an ‘unauthorised novel food’ which has no bearing on either human safety or environmental protection.

What next? Can you help?

We’re very busy raising funds to commission TNO, hopefully before the end of this year, to undertake a comprehensive risk/benefit analysis of vitamin B6 and niacin – both of which are in the cross-hairs of national authorities.

Companies or individuals willing to contribute funds for this purpose should contact us using the details below.