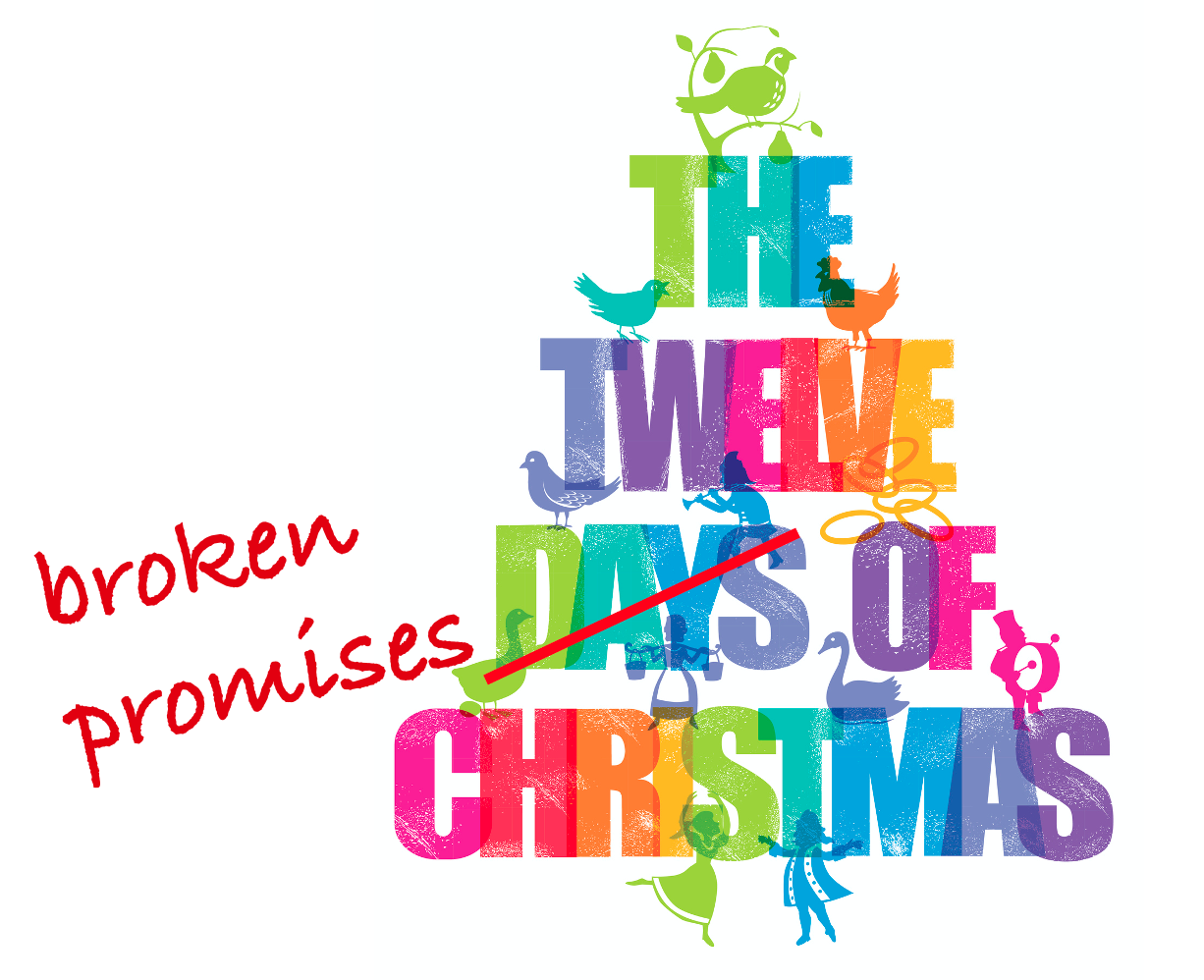 If you thought in 2021 'they' had a plan, or were guided by 'science', please think again

Instead of counting 12 partridges in a pear tree, let's contemplate the 12 'promises' we've been offered by politicians over the last couple of years....

1. It will take only 3 weeks to flatten the curve

Remember when Boris Johnson told us it would be just 3 weeks of lockdown, to 'flatten the curve' and prevent health services from being overrun? It was meant to be part of the UK government's four part battle plan against the new infectious agent.

This is an extraordinary and deeply misleading claim. We know even water isn't 100% safe for everyone, if you overdose on it, or it contains contaminants. But it's an outrage that health authorities and jab manufacturers continue to use this deceptive claim, given the torrent of data that shows clear risks to exposure to the C-19 injections. Fortunately, we've got the legal committee at the World Council for Health looking at how we might challenge this claim in the courts.

The entire public buy-in (literally - thank you taxpayers!) to mass vaccination was based on the premise that the jabs would stop transmission of SARS-CoV-2 and allow everyone to return to normal life some time in 2021.

Slowly the world had to be informed this was something of a pipe dream and herd immunity from the jabs, especially after the delta variant became dominant, was 'mythical'.

OK, so if the jabs weren't going to stop transmission, we were then told they at least did a great job at reducing hospitalisations.

Our American friends got the same spin from the CDC. Umm, that sounds like we needed to flatten the curve again, which seems a bit odd because hospitals weren't even being overrun. Never mind, those in charge of the pandemic response must know what they're doing!

It wasn't long before it became very obvious, despite Biden's mass media-friendly claims that this was a 'pandemic of the unvaccinated' that there were a lot more jabbed than unjabbed people in hospitals. Those defending the logic of mass, indiscriminate jabbing would say they'd caught 'it' from the unjabbed, when evidence pointed to the infected and jabbed being massive sources of infection.

With the increasingly familiar tendency for health authorities to keep moving the goalposts, the next promise made was that the jabs would prevent death. For many this was confusing, as they were also hearing from some sources (e.g. here and here) that many of the double jabbed were dying from covid.

6. The covid-19 injections are only for the elderly and vulnerable

For a disease that is so highly stratified in its impact, affecting much more seriously, for example, those who are older, those with weaker immune systems, those who are vitamin D-deficient, those, with underlying metabolic diseases, and men more than women, it was good to know the vulnerable would be prioritised.

For many, it implied that it might be voluntary for the healthy or the young, or at least there'd be no coercion or mandates. So it went, early on in the jab roll-out.

Surely the people with healthy immune systems who'd had over a year to show how well they were able to combat infection with zero or minimal risk of hospitalisation or death, would be out of the picture for jabs unless they chose otherwise? When the BBC told us everyone over 40 in England would get offered the jab, many inferred there'd be no coercion or mandates for anyone healthy and under 40. How wrong were they.

8. The covid-19 injections are not for teens

With evidence of only a handful of deaths among children from covid-19, all with underlying conditions, healthy teens would surely have to be exempted from the jab - especially given there was no medical need so jabbing would present only risk and no benefit? Even the UK's Joint Committee on Vaccination and Immunisation (JCVI) advised against jabs for 12 to 15-year-olds in early September.

In the new world of politicised science, the UK Government didn't take long to decide to ignore this advice from its own experts.

Come on. You're not seriously going to jab our really young ones? Surely there can't be enough data to know what the long term effects might be on their heart function or fertility, to name just two concerns? Many parents in the UK breathed a sigh of relief when they heard this from none other than Dr Chris Whitty, England's chief medical officer. It was looking like a dead cert when we heard the same from the World Health Organization, the people supposed to be running the show.

Dr Fauci, it seems had other ideas. As did Bourla, head of Pfizer, who was already planning to make a covid jab for the under 5s.

From what we know so far, jabbing healthy children could be described as child sacrifice. Emotive perhaps, but also likely a crime against humanity that needs to be remedied urgently.

10. There will be no ‘vaccine passports’

Well - that's a fine one when looked at retropectively! Vaccine passports would create a two tier society - that's one reason why the White House rejected them in April and former UK vaccines minister Zadhim Zahawi said there were no plans to introduce them.

Sadly, rolling out the NHS Covid Pass to those as young as 12 is now a major responsibility for Maggie Throup, Zahawi's replacement. That's an insidious way of coercing youngsters who surely won't have been able to exercise their right to informed consent.

Regularly jabbed travellers, worry no more: CommonPass is on the way. You might feel it's more convenient to have yours as a microchip (until recently considered a conspiracy theory)?

11. There will be no mandating of covid-19 injections

Before Biden took office, he made it clear there'd be no jab mandates in the USA. Five months later, he'd imposed mandates on two-thirds of the US workforce.

Dominic Raab, deputy PM in the UK, initially made similar noises to Biden. Then the worm turned, and UK frontline health and social care workers found themselves in Raab and Johnson's jab-hungry cross-hairs.

12. There will be no discrimination against those who decline covid injections

There's a ton of human rights law, treaties and conventions that means no government should be allowed to discriminate against someone on the basis of their medical choices. Especially if they happened to not consent to have an experimental shot, one that carries definite risks and may not provide benefit - right? These rights protect our inalienable right to bodily integrity, right? Choice is a principle of civilised democracies, right?

When authoritarianism and centralisation become part of the plan - globally - forget any of these human rights even exist. Apparently there are two wars ongoing at present, one on the virus, another on the jab-free. There is clear evidence rights and privileges for the jab-free are being removed in some countries, such as Germany.

Earlier today, I gave a presentation on omicron, jabs and natural immunity at the World Council for Health's Round Table. In it, I summarised what I feel is our way out of this madness and it involves doing at least 6 things to turn the tide (see graphic below):

My message for the end of year is a simple one that we need to keep reminding ourselves about: we must not capitulate to the in-group agenda. Regardless of being characterised as 'hardcore refuseniks' or anti-vaxxers.

As one of the world's most informed authorities on the roots of evil and genocide, Dr Ervin Staub, has long argued, the out-group will always include scapegoats. We know who we are.

One more thing: don't trust anything a politician tells you.

We've got a lot to do in 2022, let's hit it hard! We are truly grateful for the support and shares you've given us this year. Next year, in solidarity with the rapidly growing 'movement of movements', let's set ourselves well on course in 2022 to get the job done!

>>> If you're not already a member, you're very welcome to join our tribe and become an ANH Pathfinder!

>>> For more curated content on the coronavirus crisis visit covidzone.org