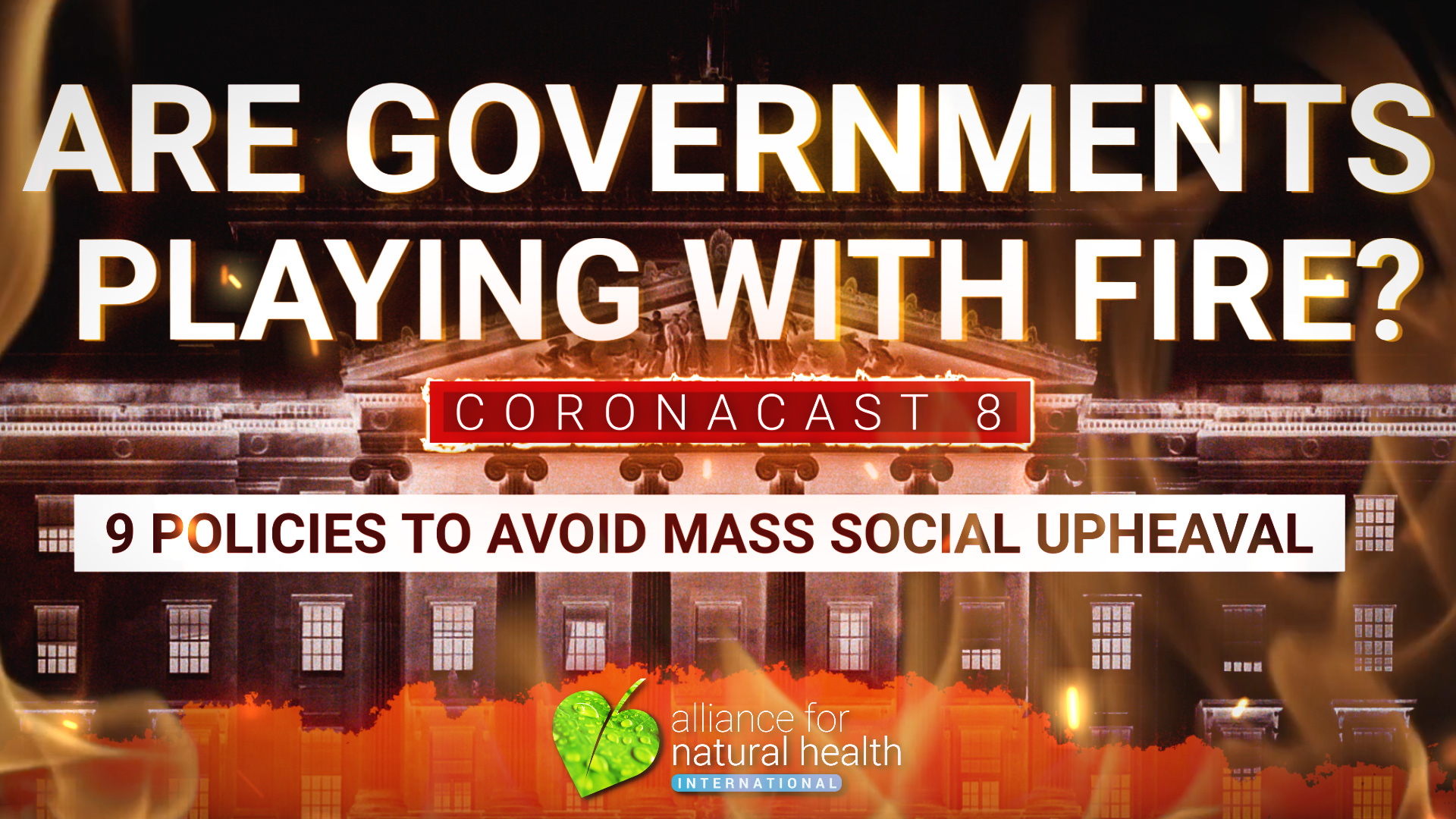 Welcome to our eighth coronacast.

In it, our founder, executive and scientific director, Rob Verkerk PhD, highlights 9 things we think governments should do now if they're serious about averting mass social upheaval - the consequences of which could dwarf any direct effects of the coronavirus itself.

The coronacast is around 10 minutes in length and you'll find a full transcript of it beneath the video.

Welcome to this week’s coronacast – the eighth in our series.

Let me ask you this: did you ever think as the clocks turned to begin this New Year the freedoms our forebears had worked so hard to win, including through the last two World Wars, would be lost in a matter of months?

This weekend, political activist Piers Corbyn, the brother of former UK Labour party leader Jeremy, who organised an anti-lockdown rally in Central London was issued with a £10,000 fine. When the right to peaceful assembly has been curtailed by emergency, broad-ranging and unspecified powers granted to governments without agreement of the electorate, you know our fundamental rights have been withdrawn.

The most disturbing thing about the last few months hasn’t been the arrival of a new and somewhat peculiar viral pathogen that for the vast majority of people causes few if any symptoms. Instead, it’s been the human reaction to it.

That’s not meant to belittle the fact that around 5% of those infected by the virus suffer serious respiratory disease that appears to be on par with flu or pneumonia – all of which can be fatal in those who are least able to mount an appropriate immune response.

If your health function is good – as in the majority – we think a much bigger threat to you – to all of us – is the gamut of human and particularly government mandated responses to the virus. The central impact of these actions is on businesses, livelihoods and economies. And it's of course businesses and economies that provide the livelihoods that allow societies to function.

What we’ve got to take on board in considering all the options is the very tight and well proven correlation between socio-economic status and health. To us, when you recognise the fundamental importance of these social and economic determinants of health, it’s remarkable that so many have just gone along with it all – buying into the narrative handed to them by the media and governments. Perhaps that’s beginning to change with the number of protests that are going on around the world. What’s just as interesting is how the media are either downplaying these protests or pretending they’re only fringe events being run and supported by wackos.

So many have simply taken on board the idea that without a vaccine the only options available to us are national lockdowns, furlough schemes and school closures. It’s as if so many just can’t see or don’t want to look at the ‘car crash’ that’ll inevitably be felt on health and everything else, the full extent of which we’ll probably only come to fully appreciate in the years ahead.

There’s no doubt as we move towards the possibility of further local lockdowns and knee-jerk reactions to rising R numbers in the absence of hospitals being overrun with covid patients – that the protests could create a deep and dangerous divide in societies.

But it isn’t too late – it’s never too late. So let’s now look at the 9 things we believe governments should do NOW to avert mass social upheaval which could have disastrous health, social and economic consequences.

Governments, health authorities and the media should stop engendering fear of the virus and help people to understand its impacts in the context of other respiratory diseases. That means they must report on deaths caused by Covid accurately and put them in the context of other diseases and causes of death, not consider them in isolation. They also need to be clear about communicating evidence of the reducing virulence of the virus – something that’s thought to happen with all new viruses that are adapting to their new hosts

The exercising of authoritarian or even totalitarian powers, based on weak or absent scientific evidence, that destroys businesses, livelihoods and ravages people’s freedoms is a recipe for social upheaval that could destroy the fabric of society. When the right to peaceful assembly means paying a fine of £10,000 or facing imprisonment, you know it’s gone too far. It’s time to get the democratic process back on track and ensure governments, as the executive authority, exercise the will of the people who voted them in.

We’ve got to see governments try their best to restore the normal function of society as far as possible – by encouraging healthy people to resume all normal activities. You only have to look at the data from countries like Sweden that engaged in a partial or light lockdown. They may have seen a little upturn in cases through increased testing but critically they now face no elevated hospitalisations. The overall impact of coronavirus – especially the collateral damage – has been so much lower because of the light lockdown and almost business as usual approach. It shows clearly that lockdowns and business closures serve no purpose in helping us adapt to the new virus and simply create a rash of additional problems.

Governments need now to abolish social distancing policies and other measures because all they do is serve to delay transmission among healthy people so that naturally-acquired immunity is delayed more – all just increasing the chances of second waves.

5) ABOLISH COMPULSORY USE OF MASKS AND FACE COVERINGS.

Governments also need to abolish the mandatory use of masks and other face coverings in public settings and in schools as there is no scientific basis for their use – something we’ve shown in more detail in a separate video.

We need to see government programmes that prioritise the enhancement of people’s natural immunity. That means supporting and encouraging healthy, immune enhancing, anti-inflammatory diets as well as the use of proven supplements such as vitamin C, vitamin D and zinc. At the moment, public health messaging in this area pays little more than lip service to these ideas and certainly doesn’t get near recommending the use of cheap simple supplements like Vitamins C, D or zinc.

Most people already know their risks, but these are of course greatest for those with one or more comorbidities. That includes people with metabolic diseases like type 2 diabetes and obesity, as well as those with heart disease or lung disease.

Possibly most controversially of all, we argue that national antigen and antibody testing programmes for the virus should now be shelved as they are both inaccurate and incredibly wasteful of limited resources – ones that we the taxpayer will ultimately have to pay for.

They also serve to maintain people’s focus on just one disease pathogen, that’s a minor player in the scheme of our overall risks in life – and they take the focus off the real problems which are caused by government responses to the virus as well as – in a proportion of our society, particularly those in more deprived areas - a lack of immune resilience making people not just susceptible to this disease but a rash of other respiratory infections caused by viruses and bacteria. And of course these health inequalities are just getting wider and wider as government mandated actions continue to hit the most deprived hardest.

While so much of the government and public health effort is looking to the promise of a vaccine, we are a long way from knowing if the new genetically engineered platforms being used for most Covid vaccines will be safe or deliver lasting immunity. While governments claim the trials of the vaccines that are being developed at warp speed are transparent, the first results published in leading journals like the New England Journal of Medicine and the Lancet are far from transparent. Side effects and harms are also very real. Transparency also requires that the medical need for a vaccine is there – which means the real risks of infection, including considering if virulence is waning over time, must be considered alongside the risks of any harms caused by the vaccine.

Oh – and we’ve added one more thing – a 10th point. This last point’s not for governments, it’s for you.

With the censorship of information that runs against the mainstream narrative and with increasing activity from biased fact-checking websites and organisations, there’s never been a more important time to share information that you believe accurately reflects the current state of play.  Please share this video with your MP or other elected representatives, as well as with your friends, family, colleagues and others in your networks.

So – let’s adapt, not fight – and please consider subscribing to our YouTube channel that has a wealth of information and playlists that will help to empower you.

You’ll also find loads of information that will help to support your choice to manage your health first and foremost by natural means – working with nature, rather than against it.

See you next time.