It was a holiday weekend here in the UK last weekend and I was looking forward to some much-needed quiet time, albeit large parts were to be in front of a computer screen. Not ideal, but I was looking forward to Patrick Coffin’s Truth over Fear: Covid-19 and The Great Reset Summit. The speaker line-up was (and still is) impressive, many of whom we know and hold in high regard. You were due to read my coverage in this newsletter, but 'cancel culture' prevailed.

I settled in on Friday evening and managed to get through the opening by Archbishop Carlo Mario Viganò (a revelation in itself!), 3 impressive presentations and a live Q&A with Dr Tess Lawrie only to find my evening curtailed abruptly. The summit had been summarily deplatformed by host Kartra without notification or prior warning to the Truth over Fear team. All 50,000 + viewers were instantly locked out and the summit pages gone as if they were never there.

I, like many others I’m sure, couldn’t quite believe it, although the content was dynamite and it had crossed my mind earlier that I’d hoped they were on a very secure platform. Turns out they weren’t. At the time I fired off two messages; to the Truth over Fear team and Kartra support just to check it wasn’t my system. I had an almost instant response back from the summit team who were also in shock and clearly dealing with the fall out. They did share that they’d had no warning and no one at Kartra was available to communicate with them.

Similar cowardly tactics to Vimeo who have erased our entire Speaking Naturally series of videos carefully designed to elicit discourse from censored or marginalised experts, labelled by non-scientist, tech administrators as guilty of the spread of misinformation that poses a risk of public danger. The fact that we were interviewing eminent scientists made no difference, but Vimeo too were unable to correspond any further on the matter. Case closed. Videos erased with no representation. We've had a Vimeo account for well over a decade.

Here is what we received from Vimeo after chasing for a response (note the support email address): 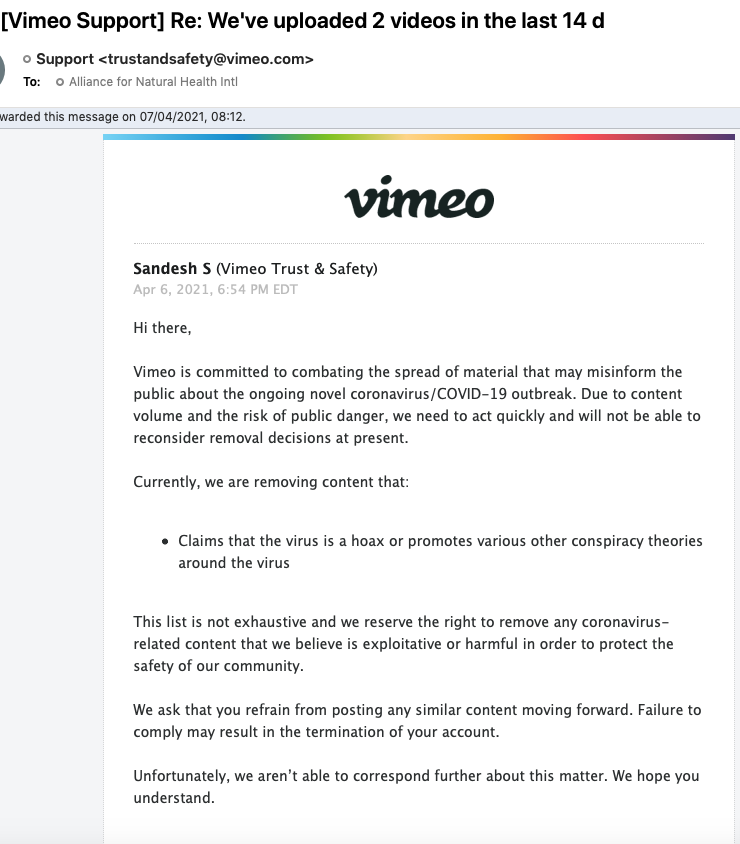 I’m also publishing the Kartra response, because I think the language has a similar refrain with the same finality and no right of reply. Just that same authoritarian, unjustified strike of censorship we’re seeing from so many of the major tech and social media providers. Kartra implore you to dream big, but clearly Patrick Coffin’s event was too big a dream. 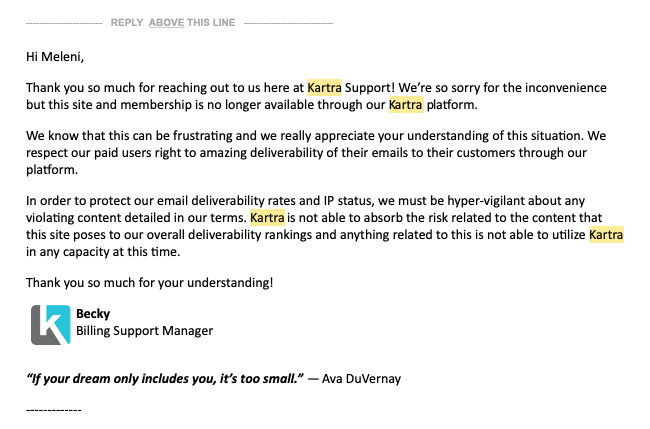 Fear in the face of truth?

The Truth over Fear summit hasn’t been the only cancel culture casualty this week. Dr Joseph Mercola, founder and visionary health freedom fighter of the giant that is Mercola.com, told the world yesterday that he has been forced to remove huge swathes of covid-related vitamin information from his site due to intensified personal threats. You heard it right: vitamins. Having stood strong for so long in the face of unprecedented levels of well-organised attacks, cyber as well as defamatory libel and slander, clearly the threats have come too close to home and enough is enough. As Mercola writes, “So, it’s not misinformation they’re afraid of. They’re afraid of the truth getting out”, and clearly ready to go to any lengths necessary to snuff out the opposition.

"Through these progressively increasing stringent measures, I have refused to succumb to these governmental and pharmaceutical thugs and their relentless attacks. I have been confident and willing to defend myself in the court of law, as I’ve had everything reviewed by some of the best attorneys in the country. Unfortunately, threats have now become very personal and have intensified to the point I can no longer preserve much of the information and research I’ve provided to you thus far. These threats are not legal in nature, and I have limited ability to defend myself against them. If you can imagine what billionaires and their front groups are capable of, I can assure you they have been creative in deploying their assets to have this content removed."- Dr Joseph Mercola

Other well-known free-speech casualties are:

"We are not surprised that Mark Zuckerberg views the truthful information that NVIC publishes about vaccine science, policy and law as a threat to perpetuating false narratives about vaccine safety created by the pharmaceutical industry and its business partners. The U.S Congress has encouraged the creation of public-private business partnerships between vaccine manufacturers and federal agencies for the past three decades. In order to be part of those lucrative partnerships, Silicon Valley companies like Facebook are clearly happy to engage in censorship. If NVIC had not done such a good job educating the public about vaccination and health for four decades, our Facebook page would still be up."- Barbara Loe Fisher, NVIC Co-Founder

Being David to the Goliath

No one likes a bully. One of our earliest childhood lessons is never to give in to bullies as they’re actually the weaker ones or they wouldn’t be resorting to such tactics. We seem to be facing a war of attrition that’s getting dirtier by the week, involving sabotage and some very dishonourable tactics, that in Dr Mercola’s case, clearly make censorship the light option.

Now more than ever, we must continue to stand as a united front, committed for the long haul and ready to step in and shore up the line when one of our friends has to step off the frontlines. It’s always darkest before the dawn. We’re not matched evenly in this contest, but neither were David and Goliath, and we all know how that turned out. What we do have in abundance is passion, strategy, skill and patience, but also empathy, compassion, trust and the ability to maintain an open heart. Priceless, and so much more powerful than they give us credit for.

All this censorship is the single most persuasive reason for us transitioning - as of today - to a membership organisation. We'd welcome your membership that will cost you around the cost of a cup of a coffee or herb tea a month.

>>> The Fear over Truth: Covid-19 and The Great Reset Summit has been safely re-platformed and will be running this weekend from Friday 7th through to Sunday 9th May. You can register your interest in the summit and you will be invited on Thursday 6th May to register when the event opens.

>>> For the repository of our articles, videos and features covering the events of the last 14 months, visit our Covid Campaign page