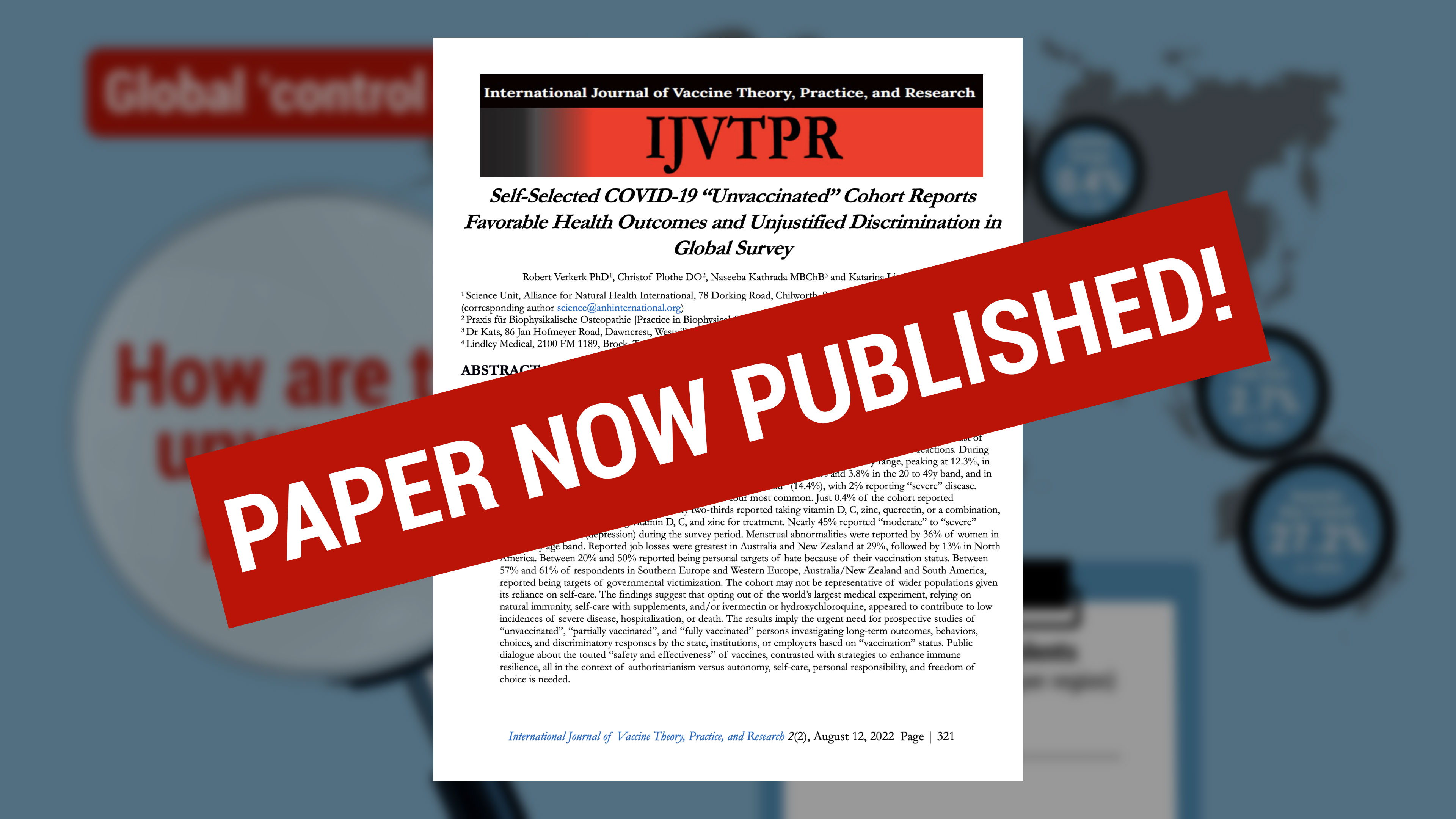 After significant censorship, the preprint paper we released in June is now in print in revised form in an uncensored peer reviewed journal

After censorship of a preprint version in June, the revised paper evaluating an 18,500-strong international cohort of covid-19 unvaccinated people has now been published in the International Journal of Vaccine Theory, Practice and Research

Back in June, the preprint server ResearchGate chose to censor a report of findings from a self-reported survey designed and conducted by the international Control Group Cooperative. The report was analysed by a team of 4 led by ANH’s Rob Verkerk PhD. The paper and its findings were removed because ResearchGate determined, “...that the content may expose [it] to harm, potential legal liability, or [was] in breach of [their] Terms.”

Undeterred, they then sought to develop the paper further for publication in a peer reviewed journal — and we are now able to bring you the fantastic news that the paper has just been formally published! 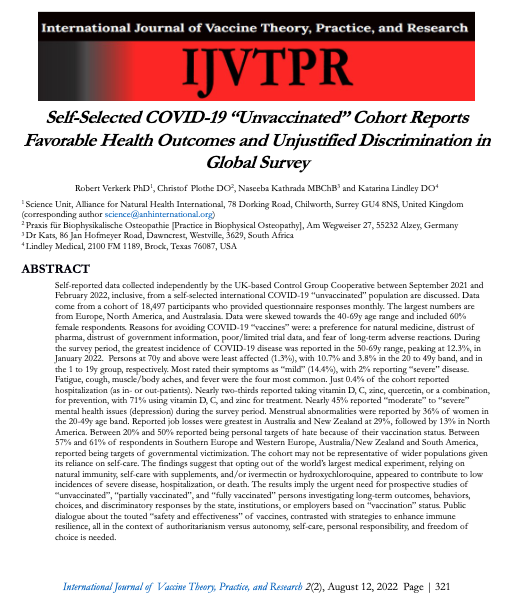 For ease of reference, here’s the abstract in full:

Self-reported data collected independently by the UK-based Control Group Cooperative between September 2021 and February 2022, inclusive, from a self-selected international COVID-19 “unvaccinated” population are discussed. Data come from a cohort of 18,497 participants who provided questionnaire responses monthly. The largest numbers are from Europe, North America, and Australasia. Data were skewed towards the 40-69y age range and included 60% female respondents. Reasons for avoiding COVID-19 “vaccines” were: a preference for natural medicine, distrust of  pharma, distrust of  government information, poor/limited trial data, and fear of  long-term adverse reactions.

Menstrual abnormalities were reported by 36% of women in the 20-49y age band. Reported job losses were greatest in Australia and New Zealand at 29%, followed by 13% in North America. Between 20% and 50% reported being personal targets of hate because of their vaccination status. Between 57% and 61% of respondents in Southern Europe and Western Europe, Australia/New Zealand and South America, reported being targets of governmental victimization.

The cohort may not be representative of widerpopulations given its reliance on self-care. The findings suggest that opting out of the world’s largest medical experiment, relying on natural immunity, self-care with supplements, and/or ivermectin or hydroxychloroquine, appeared to contribute to low incidences of  severe disease, hospitalization, or death. The results imply the urgent need for prospective studies of “unvaccinated”, “partially vaccinated”, and “fully vaccinated” persons investigating long-term outcomes, behaviors, choices, and discriminatory responses by the state, institutions, or employers based on “vaccination” status.

Public dialogue about the touted “safety and effectiveness” of  vaccines, contrasted with strategies to enhance immune resilience, all in the context of authoritarianism versus autonomy, self-care, personal responsibility, and freedom of  choice is needed.

>>> Our ask: Please share the news of the publication of this key paper as widely as you can within your networks and groups. Thank you.

With an incredibly wide range of interpretation of the available, often controversial, obscure or shaky science on the benefits and risks of covid-19 vaccination, it’s time to widen the scope of debate to encompass one of the most important branches of philosophy that has helped determine the guiding principles of so-called civilised societies. Yes, we're talking about ethics. In an increasingly ‘woke’ society, it is something of an anomaly that while it has become absolutely unacceptable, rightly so, to discriminate against any group because of their gender choice, identity sexual preferences or the colour of their skin, it is just fine to discriminate against those who have made a particular medical choice. One that just happens to also seem to be increasingly well supported scientifically (read the Discussion in Rob et al’s paper for much more on this!).

Writing in the Journal of Medical Ethics, Dr Jonathan Pugh and colleagues from the Oxford Uehiro Centre for Practical Ethics tried to tease out fallacies in the arguments used both by the so-called anti-vaccination (pro-choice?) movement and the pro-vax mainstream. Rather than going down the rabbit hole of trying to argue whether covid-19 vaccines might be more effective at protecting people from getting serious disease and dying than relying only on natural, non-genetic vaccine enhanced or altered immunity, they focus on just one central point. That’s because other arguments are now largely irrelevant as so many people appear to have been exposed to the virus (assuming you buy into the "virus exists" hypothesis) one way or another.  Pugh and colleagues’ main argument centres around whether naturally-acquired immunity following exposure to SARS-CoV-2 (a notion that can be ignored by those who believe the virus does not exist) is less, or more, effective than genetic vaccine-induced immunity. The authors then discuss how what is known so far should be used to formulate policy without compromising ethics.

Why this is so key is because there is now wide consensus that the majority of adults in countries that have experienced the greatest covid-19 associated illness and death rates have already been exposed to the virus - the majority having also been exposed to the genetic vaccines. For example, data based on samples from blood banks reported by the UK Health Security Agency on August 4 shows almost 70% of people in England tested positive for antibodies to the nucleocapsid protein, this acting as a proxy for natural infection, being distinct from antibodies from the spike protein which are elevated following vaccination and natural infection. Because antibodies (notably IgM) are relatively short-lived, this figure of 70% probably greatly understates the actual exposure of populations to the virus and the proportion that have developed robust longer-term immunity.

Long story short, this is what Pugh and colleagues say:

“Without compelling evidence for the superiority of vaccine-induced immunity, it cannot be deemed necessary to require vaccination for those with natural immunity.”

Falling victim to the censors like so many, Prof. Dr. Günter Kampf from the University Medicine Greifswald in Germany had an article of his withdrawn by The Lancet when he correctly argued that it was scientifically incoherent to describe “the unvaccinated as the main driver of the current COVID-19 situation in Germany” based on “analyzing pre-pandemic patterns of contacts.”

This is especially pertinent now that heavily vaccinated Germany, like both Spain and Italy, are now facing substantial increases in excess mortality that don’t appear to be linked directly with COVID-19 disease (more on that next week!)

Kampf did however manage to publish successfully in The Lancet last November, arguing there is no scientific basis on which to stigmatise those who have elected to not have covid-19 genetic vaccines administered. He remains one of the few whose counter-narrative voice has been heard in a major medical journal.

As proposed earlier, it’s now more critical than ever that we expand the scope of the debate to include ethics. We have to take into account the way in which very tenuous science has been converted into dogma that is now being used to justify totalitarian systems of societal control, normalised discrimination and new, unethical systems of social contract. As we have discovered from the Control Group survey, this has already contributed to job losses, stigmatisation, discrimination and unnecessary mental health burdens. As we’ve just seen from Queensland in Australia, this now includes issuing pay cuts to teachers as punishment for not ‘playing the game’ and 'opting' for covid-19 jabs and boosters.

Few of us function well when we’re isolated from others. One of the great things about the Control Group Cooperative is that it’s already brought hundreds of thousands of people who feel the same way about covid-19 injections together.

This survey and its publication is just the beginning of helping groups like ANH and the Control Group Cooperative to come together with a solution-based approach that encourages autonomy and responsibility in health. Approaches that take the pressure off over-taxed conventional medical services. That utilise the wealth of skills and resources out there in communities that can support people in their health journeys. If we've learned one thing over these last two and a half years, this is something mainstream healthcare systems, governments and intergovernmental organisations like the World Health Organization will never do.

It’s down to us all to work this out, together, and at ANH we’ve done a lot of the groundwork already with our sustainable health system ‘blueprint’ project.

>>> Find out more about our blueprint project here

>>> Ready to break free from the current narrative? Want to understand more about how people are being coerced and manipulated? Or are you a health professional who would like more tools for your practitioner toolkit? Find out more about our upcoming training day, Behaviour and Communication Magic

>>> If you’re not already signed up for our weekly newsletter, sign up for free now using the SUBSCRIBE button at the top of our website – or better still – become a Pathfinder member and enjoy benefits unique to our members.