Home News Could we be the losers in the vaccine race?

Potentially – but not if we demand full transparency of 10 criteria

“Pharmaceutical corporations have a very poor track record of transparency across the board – from licensing deals and technology transfers to costs of R&D and clinical trial data – and the little information that has been revealed around AstraZeneca’s not-for-profit promises should be a warning sign that pharma cannot be trusted to act in the interest of public health.”- Médecins Sans Frontières / Doctors Without Borders (MSF)

The race is on

When everyone’s trying to pick potential winners of the global race to produce covid vaccines, spare a thought for those of us who are the guinea pigs. We, the public, as well as concerned doctors and other health professionals, need to be crystal clear about what information we need to give consent – assuming vaccine rollout is not made mandatory in your country or state.

This is a bigger ask than it might be if we had functioning democracies. But in most countries that have enjoyed democratic governance in recent years, emergency measures granted by the World Health Organization’s characterisation of Covid-19 as a “pandemic” on 11 March 2020, has seen democracy widely substituted by coercion and authoritarian rule.

Not only that, those who ask questions about vaccines have been marginalised as conspiracy theorists. A large international survey with over 13,000 people in 19 countries published in Nature Medicine found that 71% of those surveyed would agree to vaccination if it “was proven safe and effective” (but who adjudicates?). The highest acceptance rate (88%) was found in China and the lowest in Russia (55%). The same study found that acceptance was strongly correlated to trust in governments – another reminder that governments who have not managed to win the trust of their people must shoulder some responsibility for lack of vaccine confidence.

For many people, the problem isn’t just a lack of trust, it’s a lack of data. Scientists like Dr Tom Jefferson from Cochrane and Oxford University’s Centre for Evidence Based Medicine as well as Dr Peter Doshi, the BMJ associate editor, have long argued for full transparency of trial data to allow clinical trials by vaccine (and drug) makers to be independently analysed.

>>> The UK Government's Vaccine Taskforce: strategy for protecting the UK and the world

Demand for transparency is also being called for by Médecins Sans Frontières / Doctors Without Borders (MSF) which recently warned “…the little information that has been revealed around AstraZeneca’s not-for-profit promises should be a warning sign that pharma cannot be trusted to act in the interest of public health.”

While some vaccine makers have agreed to not profit from the pandemic, AstraZeneca has made clear that it’s limiting its non-profit pledge to 1 July 2021 which it has determined will be the end of the pandemic period. Clearly they have access to a crystal ball that we don’t!

Pfizer’s press announcement on 9 November said its BNT162b2 vaccine was “90% effective”. That was followed by Moderna’s claim of “94.5% efficacy”. Moderna was then pipped at the post by the previous week’s silver medallist, Pfizer, when it came back with its 95% effective claim just yesterday with the completion of its Phase 3 clinical trial. Of course this one half of one percent difference is meaningless in terms of statistical significance.

All these buoyant claims have been made with passing reference to a lack of serious adverse events, which you should know are ones that endanger life. The fact that 9 of the leading vaccine developers have signed up to a pledge to put consumer and covid-19 patient safety first (therefore before profits) is no doubt intended to help build confidence among a hesitant public.

If that wasn’t enough – the airwaves are full today of news of the Oxford/AstraZeneca vaccine, courtesy of a newly published article in The Lancet journal. The headline was the immunity was as good in older people as younger ones, but we don’t have sufficient detail around the kinetics of the adaptive immune response to really judge this claim objectively. Little emphasis was given to adverse reactions being worse for the genetically modified chimpanzee vaccine targeting SARS-CoV-2 as compared with the control meningitis vaccine.

But as with any marketing proposition, there’s more than just one USP, the claimed efficacy in a Phase 3 trial. Other players like Johnson & Johnson and Novavax are claiming that the standard refrigeration temperatures required for their vaccines will likely be more suited to global logistics and distribution.

In May 2020, together with our colleagues at the British Society for Ecological Medicine. we launched a manifesto for the 10 information criteria we thought should be pre-conditions to providing informed consent for covid vaccination. These include manufacturers putting raw trial data into the public domain to allow independent analysis, disclosing the full list of ingredients in vaccines and what the state of naturally-acquired immunity is in representative populations prior to vaccination.

The table below shows how the BioNTech/Pfizer and Moderna vaccines stack up so far according to our transparency criteria. There is clearly a long way to go before meaningful transparency can be declared. 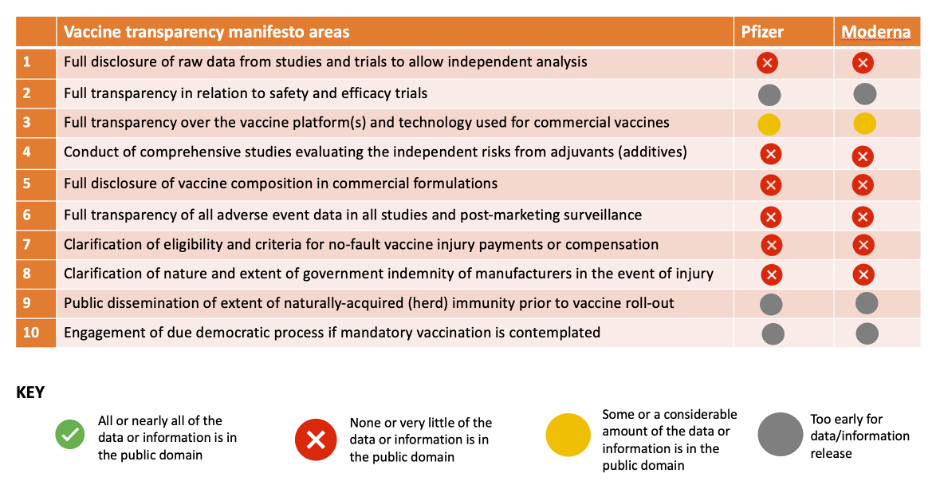 It’s impossible to give properly informed consent without this information.

Engaging with the data

But having the necessary data and information is just the starting point. Then you have to engage with it. An important priority for many will be to weigh up the known risk/benefit profile of the vaccine against need. This requires understanding the danger posed by the virus, the virulence of which is likely weakening, as well as knowing the extent of naturally-acquired immunity. It should also take into account other potential interactions, such as the observed correlation between flu vaccination and Covid-related deaths.

A recent study has suggested that herd immunity thresholds that interrupt the progress of transmission might be as low as 10 to 20% from naturally acquired immunity, as compared with over 60% if immunity is to be gained by randomised vaccination. The reality is that it will take many more months to compare the complex pattern of sustained immunity from memory B and T cells, and it may well be that exposure to the real virus elicits a more robust and persistent response than exposure to, for example, endogenously produced spike protein following injection of synthetic messenger RNA sequences.

Don’t blame us for asking

Seen in the context of just how much information we don’t know or have at this stage, it’s not clear to us why those of us who are asking for more information about the current crop of covid vaccines under development are so marginalised and ridiculed. We’re simply exercising our right to informed consent.