Home News Getting (over) the (first) hump 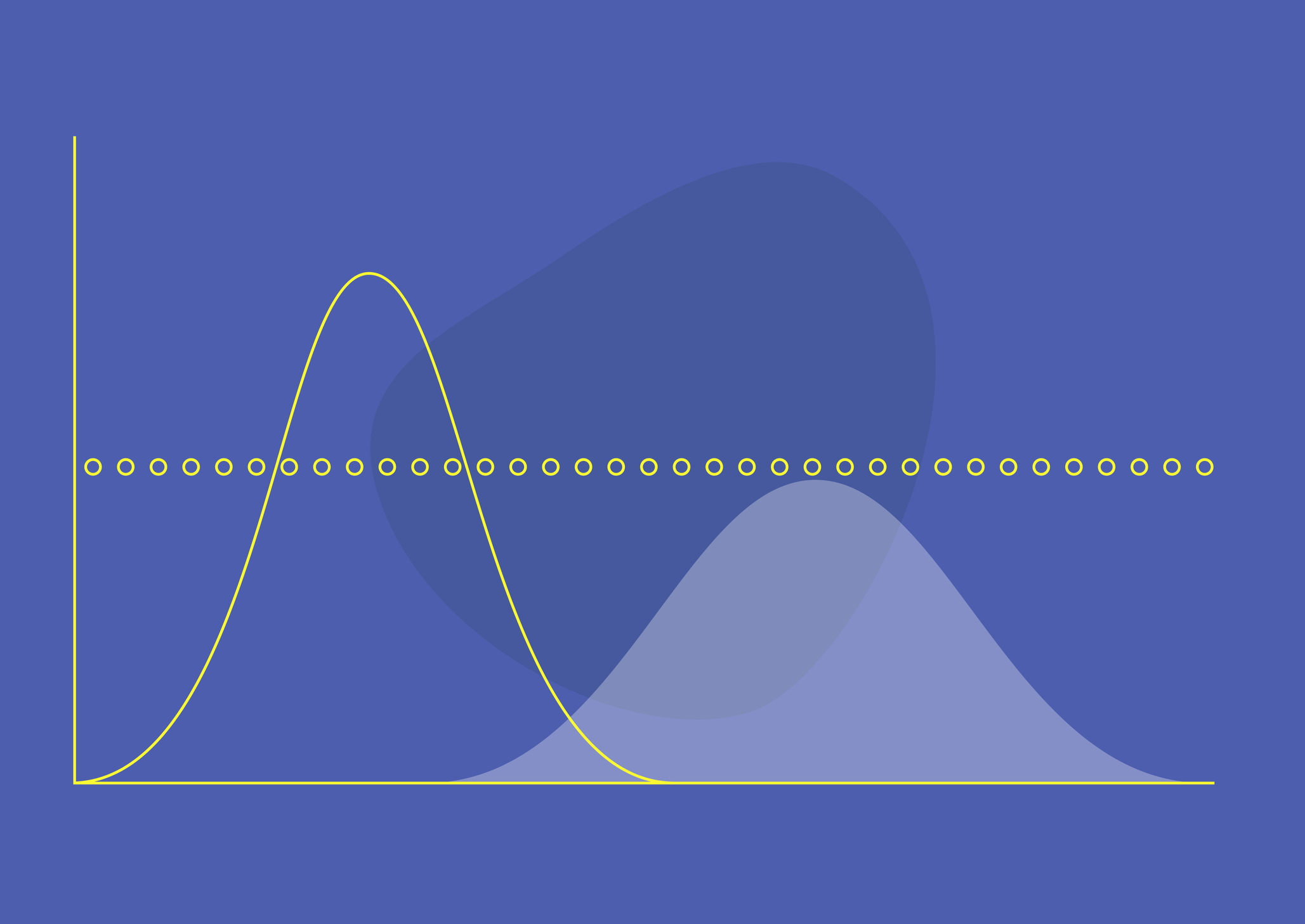 Getting (over) the (first) hump

Is ‘flattening the curve’ really the right way to go and are there other options?

For all of you who’ve been diligently monitoring the various Covid trackers, you’ll have noticed some very divergent patterns in terms of numbers of confirmed cases, new cases and trends. China appears to have the disease completely under control, although the accuracy of some of the data emerging from China has been challenged and a resurgence of the disease could easily occur in the future as it is highly unlikely that most of China’s 1.4 billion population has so far acquired immunity.

Others like South Korea, Australia and Norway, all with relatively small numbers of confirmed cases, are experiencing a flattening of their curves, while many more, such as Spain, Germany, Italy, Iran and Switzerland, are witnessing just the beginning of such a trend (Figure 1).

More disconcerting is of course the many countries that have yet to see any appreciable flattening. That includes populous countries like the USA, UK, Netherlands, Turkey, Brazil – along with many others (Figure 1). But with all this talk by governments and their scientific advisors of the need to ‘flatten the curve’, let’s remember you’re looking at the cumulative total of confirmed cases which requires there to be zero new cases to see a flat line, like China’s currently (Figure 1). 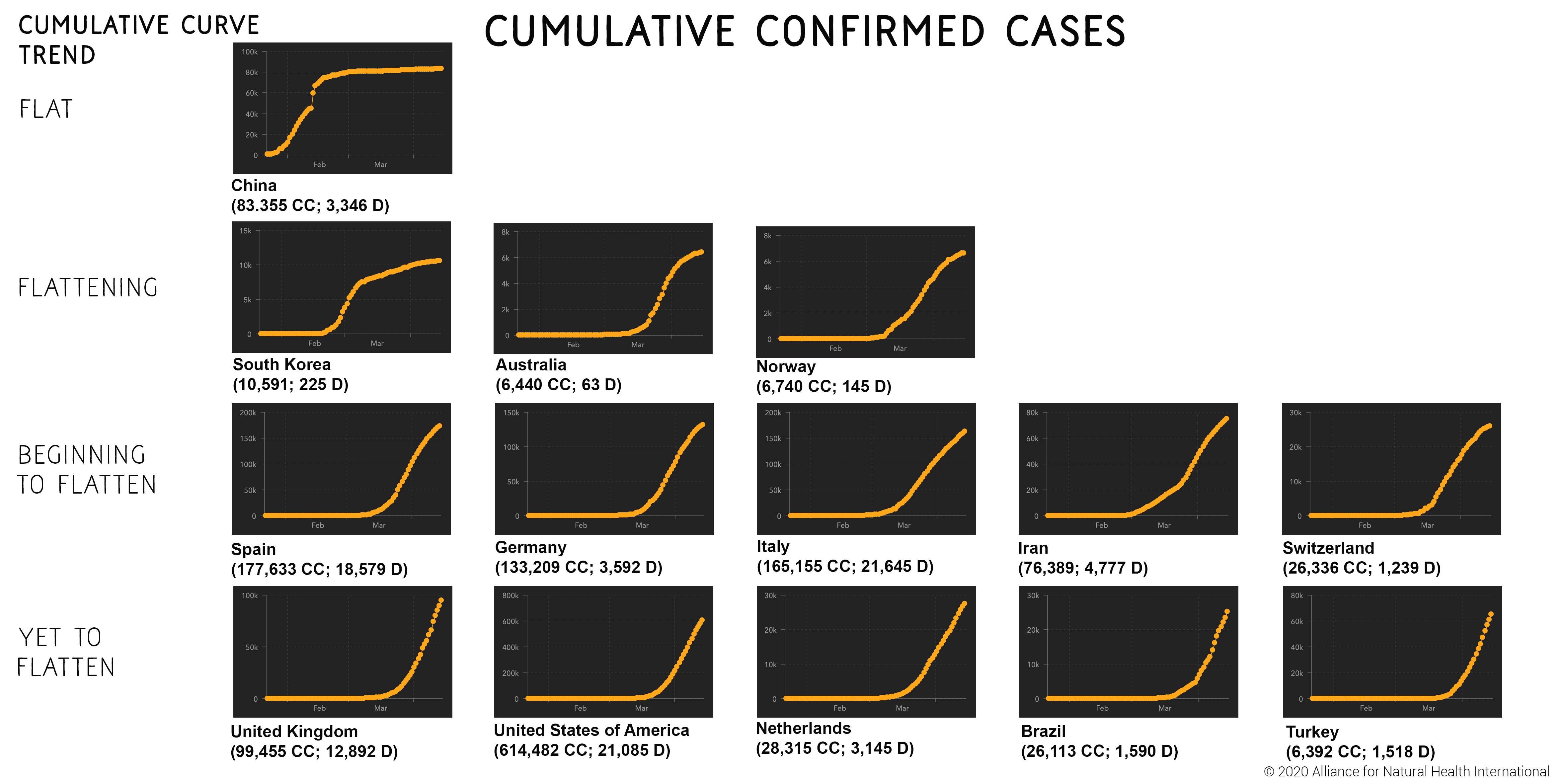 FIGURE 1. Different trends in the curves for confirmed cases among selected countries. Where CC = confirmed cases; D = deaths, based on data on 15 April 2020 from Johns Hopkins University of Medicine, Coronavirus Resource Center. 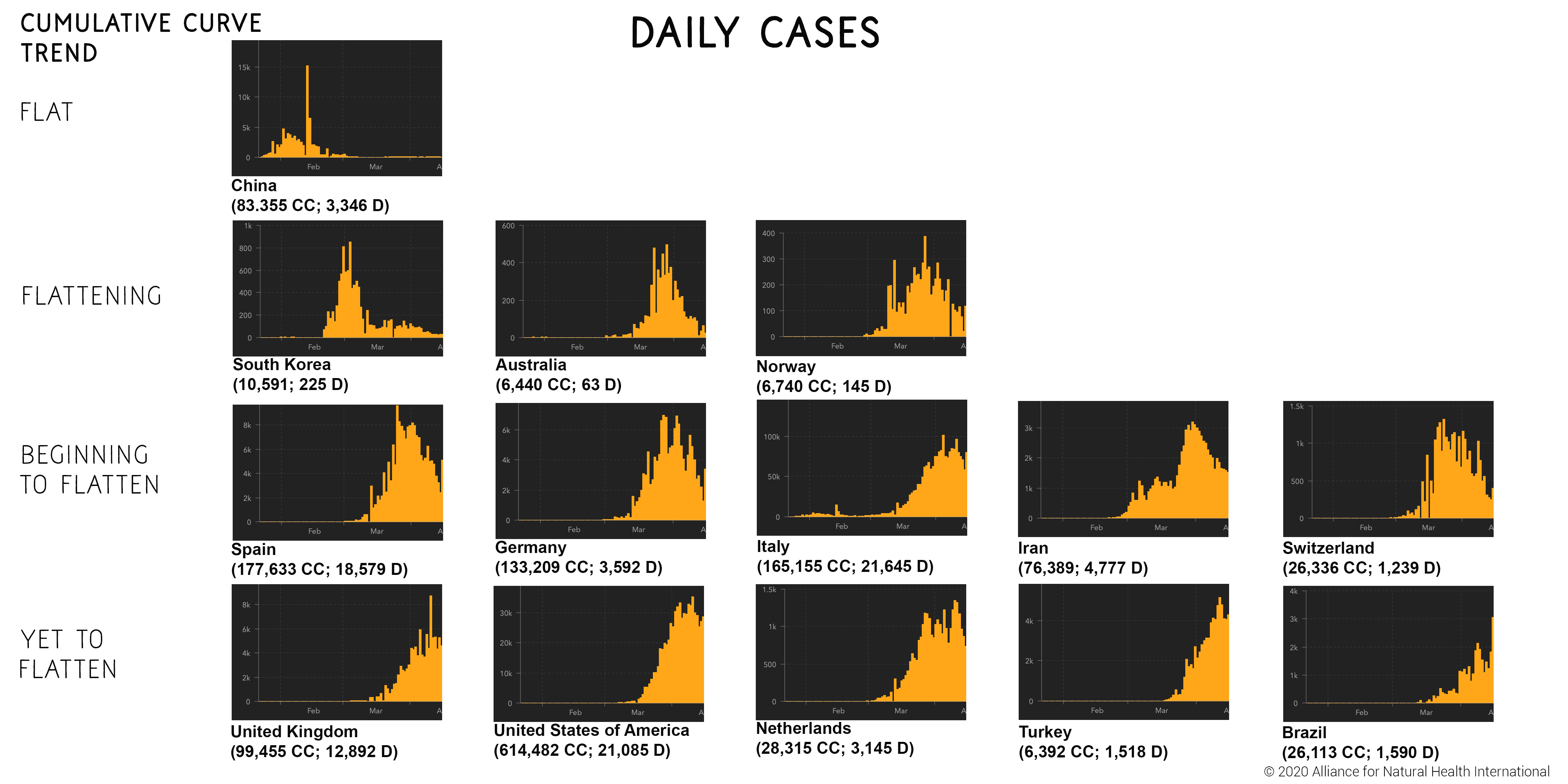 FIGURE 2. Different trends in the curves for confirmed cases among selected countries. Where CC = confirmed cases; D = deaths, based on data on 15 April 2020 from Johns Hopkins University of Medicine, Coronavirus Resource Center.

You get a better idea of what’s happening at the most recent point in time with the overall epidemiology or viral spread in a given country by looking at the trends in daily occurrence of new cases. So when you look again at the same selected countries shown in Figure 1, you’ll see that even those countries that appear not yet to have flattened the curve, like the UK and US, appear to be over the peak in number of new cases (Figure 2).

There are also many countries that have suffered very little in the way of Covid-related incidence and deaths – many of these being densely populated in warmer or tropical climates, such as Sierra Leone that was hit so hard by Ebola.

This begs several questions, such as: what caused infections rates to slow so markedly or for infections to hardly take off at all? Have the lockdowns and social distancing been the driving force behind declining new cases, or are other factors at play? And just how important are environmental factors?

The reality is that the scientific community does not have a solid view on these questions. But what is beginning to emerge is that social distancing and lockdowns might increase the risk of a rebound – and provide a stronger argument for the perceived need for a vaccine, for which there were 115 candidates in development as of 8 April.

Given the unique features of this disease, we get our most valuable lessons from looking at data for Covid-19, not other respiratory infections. Here, Japan and South Korea provide two of the best examples because the first infection surge in those countries appears to be well and truly over.

Flattening the curve prolongs the disease

Knut Wittkowski PhD, a renowned scientist and epidemiologist – previously the head of the Department of Biostatistics, Epidemiology, and Research Design at The Rockefeller University, New York – and currently CEO of Asdera LLC that’s focused on discovery of novel treatment for complex diseases, has a particularly interesting take on it.

You can read the paper he’s just published in MedRxIV or watch an interview of him below.

Among the key take homes are:

Is the cure worse than the disease?

This is the question that is on many of our minds. It’s being increasingly asked by the public and even the media. Governments seem hazy in their responses and for many it seems that primary strategy is ‘let’s make it up as we go along’.
It’s always easier to be critical in hindsight, but a few home truths are becoming increasingly apparent:

Many of us are becoming increasingly frustrated by the make-it-up-as-you-go-along strategy of governments.

There are a huge variety of things we could all be doing, and removing civil liberties and freedoms and imposing untargeted widescale lockdowns is only one of the options.

We’ve created a list below of a much wider range of options that we believe the public and parliaments, at least in so-called democratic countries, should have been engaged in exploring or trialling.

They are as follows:

Many of these options have not been adequately explored. There is an increasing emphasis by governments that the only way out of lockdown is mass vaccination. The public is being told very little about how the vaccines are being developed (Figure 3), or what the implications of their fast-tracking might be on safety or effectiveness. 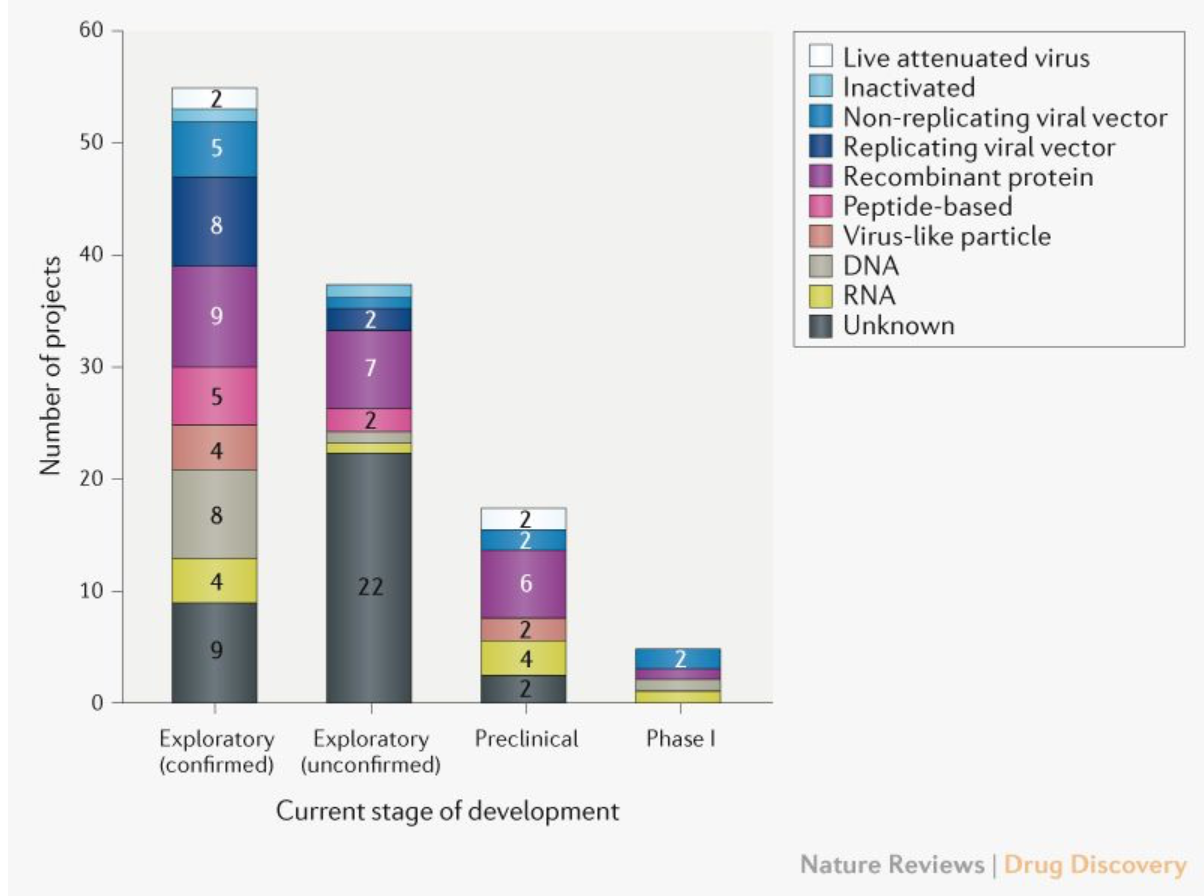 They are certainly not being told that the vaccines currently being developed are predominantly the product of genetic engineering. There is no public discussion over the risks associated with such fast-tracking vaccines.

When applied previously to GSK’s Pandemrix for the 2009 ‘swine flu’ pandemic, a slew of damages that governments have consistently tried to cover up were left in its wake.

The public is also not being told that nationwide vaccination under national immunisation programmes provides legal protection to the vaccine makers in the event of no-fault vaccine-injury. This contrasts with regular therapeutic drugs for which the pharmaceutical industry remains liable in the event of litigation based on conclusive evidence of undisclosed harms.

At ANH-Intl, in evaluating all the available evidence, we believe adamantly we could be afforded a much quicker and less damaging route through this current pandemic that wouldn’t involve causing such widespread collateral damage to societies and economies.

This would be a much more fluid system that would flex according to the needs of affected cities and towns. It would be country-specific and regional, not national or international, built around the circumstances, biology and ecology of the infection in a given locality.

It would include real-world trials in which immune enhancement protocols were prioritised, alongside improved antigen and antibody testing and shielding of vulnerable populations. It would include changes in acute care management that took into account the views of those at the cutting edge of clinical care who have demonstrated high levels of success with innovative strategies. This would include routine use of high dose intravenous vitamin C in patients with severe disease. It would include nutrition and lifestyle based prevention strategies that have been demonstrated to enhance immune function. People would also be asked to send as much time outdoors as possible; not only are respiratory infections 'caught' much less frequently outdoors, exposure to sunlight will increase circulating levels of vitamin D. What evidence did northern hemisphere governments rely on when telling their public to "stay indoors" after a long winter?

Bottom line, if governments were to listen diligently and with open minds to some of the key voices we’ve included in our video (below) along with the views of the many others with valid knowledge and experience who are also not being adequately heard – the strategies being employed would change dramatically from those currently being enacted. Lives would be saved and the future would be far brighter. We would have adapted to a new virus – something we’ve done successfully many times before in our evolutionary history. As importantly, the civil liberties that our ancestors have fought to ensure over centuries in the so-called free world would remain with us.

From infectious to social uprisings?

The road we’re on is undoubtedly a very dangerous one. The virus is likely the least of the dangers we currently face.

The arrest, bullying and albeit short detainment to a psychiatric ward of medical lawyer Beate Bahner in the southern German State of Baden-Württemberg serves as reminder of what can happen when government’s disregard the rule of law under the pretext of this pandemic. Ms Bahner’s supposed crime was organising a protest against the lockdown.

Civil unrest is building elsewhere, from Berlin to the USA, where protests have been witnessed in New York and Ohio, to name just two examples. 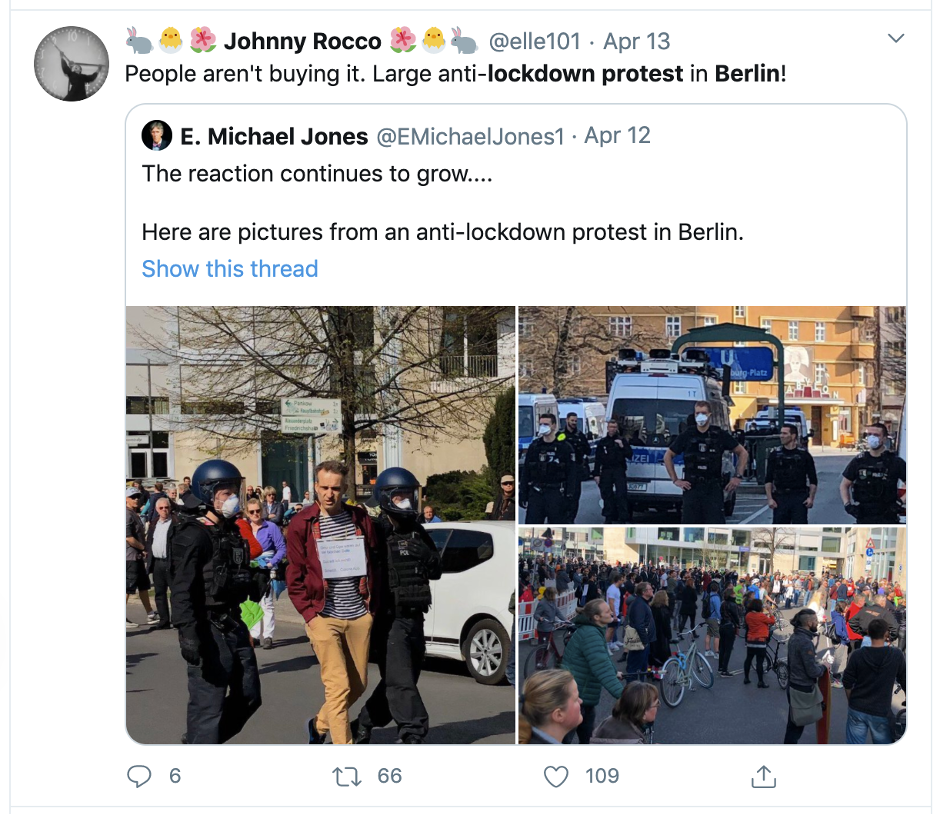 Last month, we urged our supporters that the key was to adapt, not fight. At that time we were only referring to dealing with the virus itself.

We now sense a different approach may be required to deal with the human, inter-governmental and governmental response to the virus. It seems more and more likely we will once again need to fight for the right to peacefully protest, to express ourselves freely and to care for our bodies in the manner we choose, even if that is by entirely natural means.

Check out our weekly update in the ANH-Intl Covid Zone