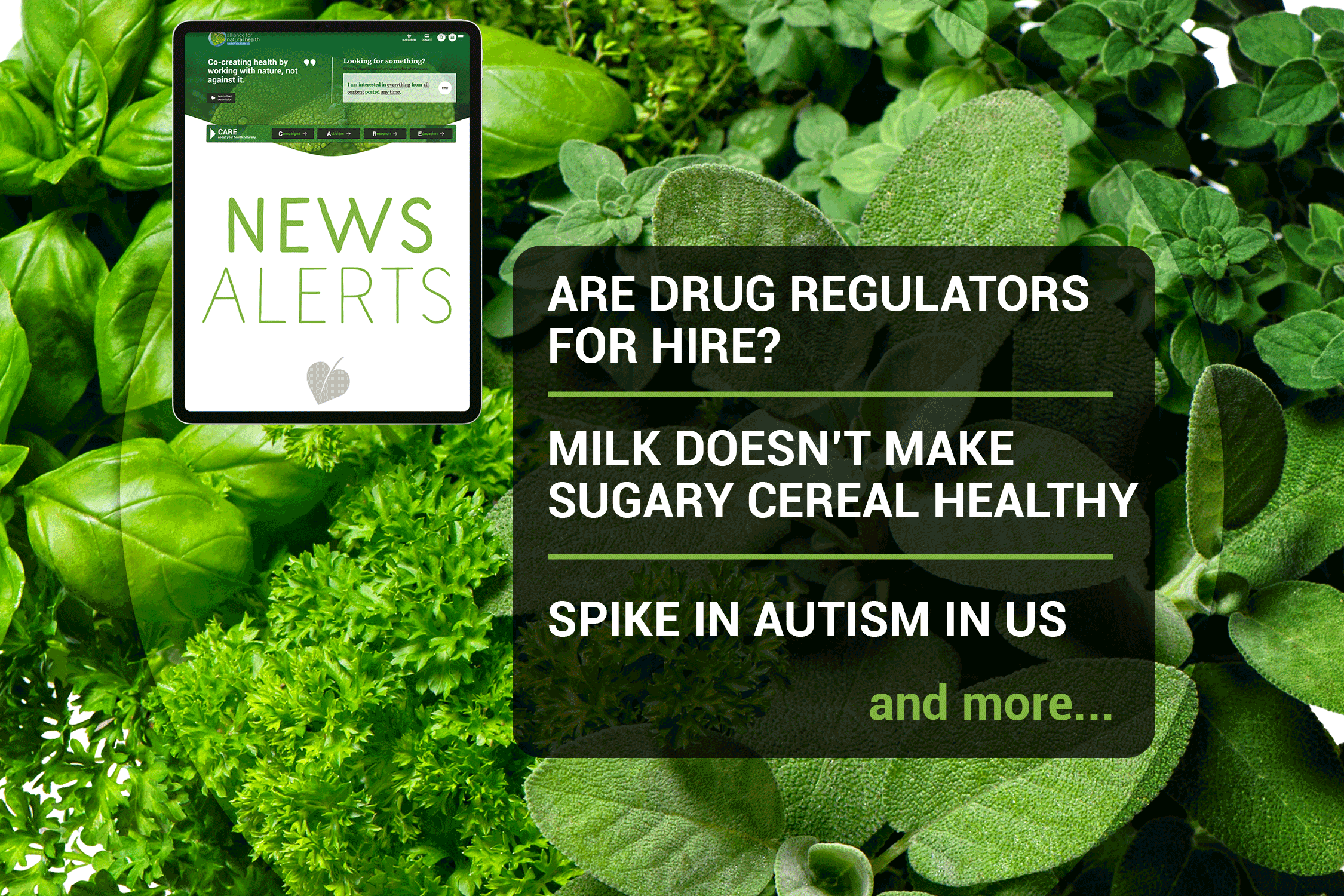 Are drug regulators for hire?
Milk doesn't make sugary cereal healthy!
EU to cut pesticide use by 50%
Regenerative agriculture in the US
European teens poisoned by PFAS
Spike in autism in US
Safetech Declaration

Are drug regulators for hire?

Writing in The BMJ, investigative journalist, Maryanne Demasi, asks if drug regulators are independent enough of the companies whose products they are supposed to regulate. The answer is a big, fat no! In today's world, large swathes of regulator funding comes from the very companies they're supposed to be policing. The vast majority of decisions made by regulators rely on data from the makers of the products they're assessing resulting in high levels of positive decisions. New fees have been introduced in recent decades to speed up the approval process which has resulted in approvals of drugs that have had to be withdrawn for safety reasons, be given black box labelling or be discontinued by the manufacturer. Not only is the funding mechanism broken, the system has led to a 'revolving door' between regulatory agencies and manufacturers, which sees high ranking officials leaving government positions and walking into highly paid jobs with the same companies they've been responsible for regulating. Sociologist, David Light, of Rowan University, New Jersey, says it's no longer possible for healthcare professionals to rely on regulators to provide unbiased, rigorous evaluations of new drugs. This is a system that's fundamentally broken. The problem now is how to fix it?

Kelloggs launched a legal challenge against the UK government's anti-obesity campaign, which is bringing in restrictions on the advertising of foods deemed to be unhealthy. Kelloggs held that the government's calculations only considered dry cereal and did not take account of the addition of milk. In throwing the case out, the presiding judge said that mixing a product that's already high in sugar with milk does not compensate for its sugar content. Such claims are a vast oversimplification of the problem though. Front and centre is the ultra processing of such cereal products, which renders them no better than a bowl of sugar in terms of the effects on our body. Take a peek at our new book RESET EATING to find out why minimally processed, nutrient dense foods are a better choice not just for you but your kids as well.

EU to cut pesticide use by 50%

The EU has formally adopted binding rules, first introduced in 2009, that will see a 50% reduction in the use of chemical pesticides by 2030. The Sustainable Use of Pesticides Directive, which has been overhauled to bring it line with the EU Green Deal, Biodiversity and Farm to Fork strategies, will see a total ban on the use of pesticides in public places such as parks along with a significant reduction in agricultural use. Organic farming techniques will be promoted along with the use of biological pesticides. On the surface this sounds fantastic in terms of promoting biodiversity, protecting the environment and human health. There is a but though. The EU plans are intended to rely on genetically engineered crops that will, allegedly, require lower chemical inputs and so-called, precision agriculture, where only certain parts of a crop are treated. Genetic engineering techniques are also being used to create biopesticides, which once released won't be able to be retrieved. Once again proving that it's all in the small print with headlines set to divert concerned citizens.

Regenerative agriculture in the US

A new report from UK not for profit organisation, Forum for the Future, sets out what's needed to transition to regenerative agriculture techniques in the USA. The report sets out the reasons why such a transition is needed along with the key challenges and calls for collaboration across a wide range of silos and sectors to enable and accelerate the badly needed transition.

European teenagers have high levels of Perfluoroalkyl and Polyfluoroalkyl Substances (PFAS) in their blood according to a multi-country biomonitoring study published by the HBM4EU project. Researchers took blood samples from 2,000 teenagers in nine countries between 2014 and 2021. Over 14% of those tested exceeded levels set by the European Food Standards Agency (EFSA). The highest levels were found in Swedish, French and Norwegian teenagers, while Spanish teenagers had the lowest levels. Higher consumption of fish and seafood, offal and locally produced foods were found to be the most abundant sources of PFAS's. ChemSec’s Senior Chemicals and Business Advisor, Dr. Jonatan Kleimark, said, “The fact that these levels of PFAS can be found in our growing population is infuriating. Misleading industrial actors and lagging legislation have allowed these chemicals to poison too many generations already. It’s time to put an end to this madness once and for all.”

Spike in autism diagnoses in US

Cases of Autism Spectrum Disorder (ASD) diagnosed in the USA saw a 52% spike between 2017 and 2020. It means that 1 in 30 children are now being diagnosed with the disorder. Researchers from Guangdong Pharmaceutical University in China, publishing in JAMA Pediatrics, used data from the Centers for Disease Control and Prevention's (CDC) annual National Health Interview Survey between 2019 and 2020. More boys than girls were found to have an ASD diagnosis. The researchers didn't give any reasons for the spike. Data from Northern Ireland shows ASD cases have quadrupled in the last decade. In the Belfast area alone, 1 in 14 children now have an ASD diagnosis. In 2014, Stephanie Seneff PhD, predicted that by 2025 1 in 2 children would be on the autistic spectrum. There are multiple theories as to the cause of the increase yet most of these continue to be rubbished and marginalised by mainstream health authorities despite the very real possibility of Seneff's predictions coming true.

SafeTech International is a collaboration of individuals and organisations from across the globe who've joined together to support, encourage and enable the growth of safe technology. It's supporting the global movement to 'rein in' the relentless expansion of wireless technologies not only on Earth but across our skies and in our oceans because of the threat it poses to all life. It has published a Declaration calling for current technologies such as 5G, 6G or any other future G to be ditched in favour of technologies that don't harm the health and wellbeing of all organisms on the planet. The Safetech team invite individuals to "...choose local control of technology, informed choice, wired connections when possible, balance, and a life-affirming future for all life on our planet". If this initiative resonates with you there are a range of suggested actions that you can take to raise awareness of the harms caused by wireless technology. 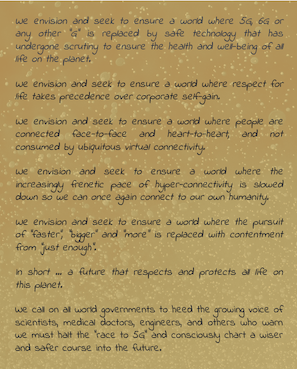