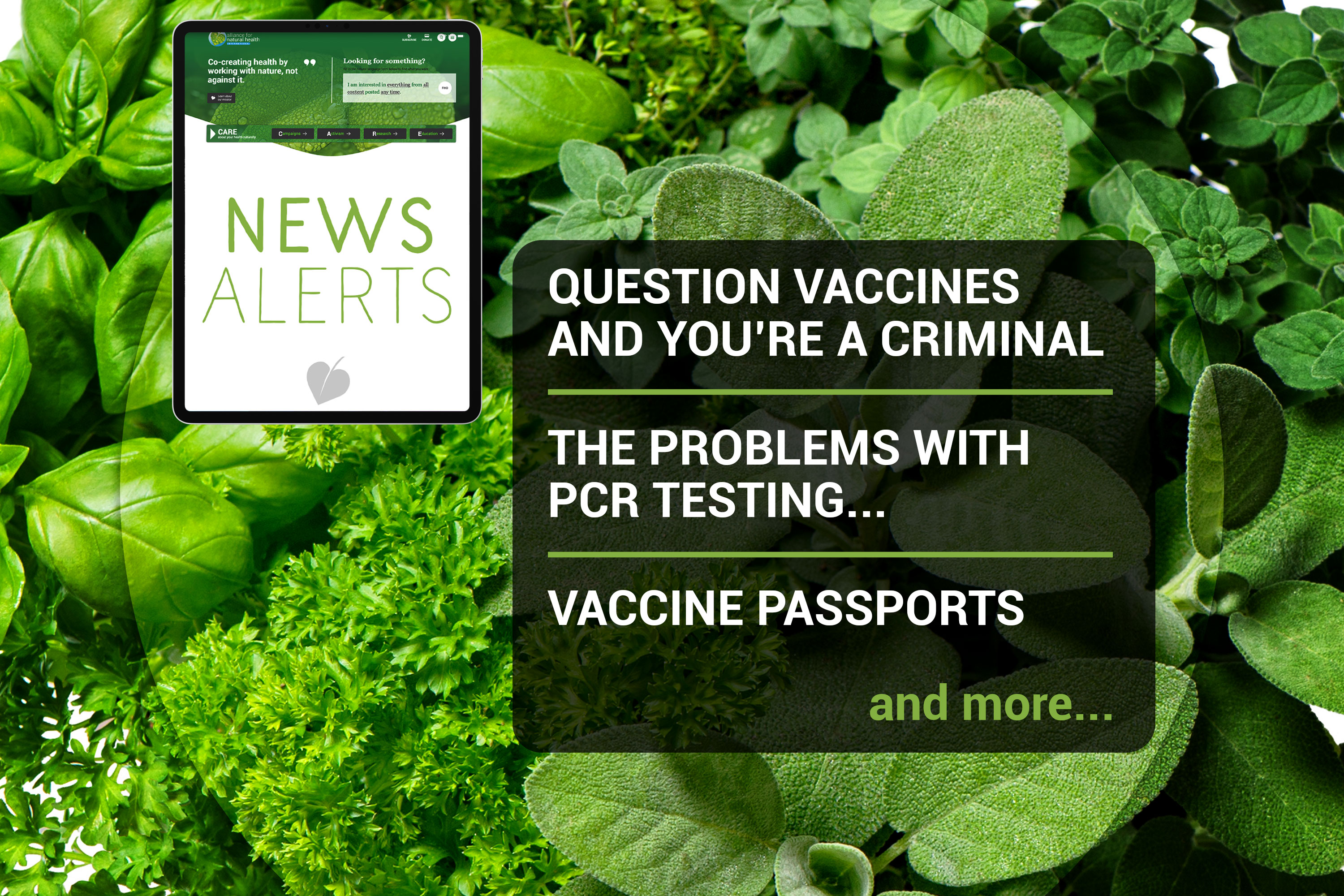 Should those questioning vaccines be prosecuted?

If you dare to air any concerns over vaccines you should be prosecuted for spreading false information according to a newly published article, “Should spreading anti-vaccine misinformation be criminalized?”, in The BMJ. ANH founder, Rob Verkerk PhD, was as appalled as the rest of us and expressed his concern in a rapid response to the piece. We’re sharing his thoughts here: “Dear Editor - given the appalling degree of polarisation that is presently dismantling the fabric of society, I was surprised that Melinda Mills and Jonas Sivelä would quite so readily make assumptions about criminal behaviours given the profound scientific uncertainties around a novel disease and even more novel vaccines. Criminality is typically determined in courtrooms based on legal judgments of evidence. We have yet to see any significant case law around vaccine hesitancy or misinformation. Dissent should not be conflated with criminality, and dissent has historically catalysed the discourse that ultimately facilities the emergence of scientific consensus. Let’s not judge until we have more facts, and let’s allow the courts to create criminals, not doctors, scientists or politicians.” Whatever your views on vaccines, preventing valid scientific debate and discourse looking at risks and benefits is just not acceptable. Let alone the criminalisation of someone for expressing their concerns, in the case of the covid vaccines, about an experimental medical intervention with the potential to cause harm. Science has historically bred true sceptics who, with open minds, question, debate and welcome broad and honest discussions, regardless of the subject area.

Some extremely good news for a change! In a major win for people power, the Medical Board of Australia (MBA) has dropped plans to drastically restrict access to natural therapies in the face of fierce opposition coordinated by the Australian Integrative Medicine Association (AIMA). The MBA has announced it will not be introducing separate guidelines for doctors practicing complementary, ‘unconventional’ (by who’s definition?) and emerging treatments that threatened their ability to practice. Thanks to AIMA’s efforts, the MBA’s consultation drew an overwhelming 13,000 responses from those who wish to choose the way they look after their health and protect their freedom of choice. Once again people power triumphs. We are the 99%.

The problem with PCR testing…

The higher the number of cycles used in a PCR test the greater the likelihood of a false positive result. A new paper published in New England Journal of Medicine sought to determine the time taken for a covid-19 positive patient to stop being infectious. The researchers used PCR testing to determine the presence of virus prior to culturing samples. They found that virus could not be cultured from any PCR tests that used over 28.4 cycles. A second study published in The Lancet also calls out the problems associated with PCR testing pointing out the majority of people infected with SARS-CoV-2 are only contagious for 4-8 days. However, PCR tests pick up viral fragments up to 22-33 days following infection suggesting 50-75% of positive PCR tests are in fact dead viral fragments and that the person is no longer infectious. Even the World Health Organization has now recognised this issue updating its guidelines for labs in January to recommend the use of lower cycle rates. Both studies uphold the views of many scientists that PCR tests are not fit for purpose and that many positive test results are plain and simply wrong. Until labs are told to reduce the cycle rate or health authorities and governments stop using such tests the pandemic will continue ad infinitum.

Covid infections may have resulted in over 20 million years of life lost globally. This is the stark conclusion of a new study published in Scientific Reports Journal. As horrific as this number may seem, the researchers do not take into account that many of the deaths attributed to covid-19 were largely preventable. Nor do they consider how many years of life lost were due to non-covid deaths as a result of the ferocious response to the pandemic. The pandemic has shone a spotlight on the global health crisis in front us that isn’t covid-related, but due to the chronic disease epidemic. If we don’t address the failings in people’s overall resilience which enhances general health function and allows our immune system to do the job its evolved to do, we are looking at a very bleak future indeed. To do this effectively requires widespread public health campaigns involving diet and lifestyle messaging, which just isn’t happening. The question that should be on everyone’s lips is, why?

A leading immunologist, J. Bart Classen MD, writing in Microbiology & Infectious Diseases warns of the potential for vaccine recipients to develop a long-term debilitating condition years after they’re vaccinated known as prion disease. Dr Classen’s view is that the condition could be far worse than the infection the vaccines are designed to counter. Other concerns have been raised in a study published in Clinical Imaging that immune reactions following vaccination against covid could mimic breast cancer. The study discusses four cases of women with swelling and inflammation in the axillary lymph nodes following vaccination under the same arm the vaccine was delivered into. In Israel, women have reported disruptions to their menstrual cycle following vaccination. It is essential that patients clearly understand all known and potential unknown risks in order for them to give informed consent to vaccination. One of our main concerns is that citizens are not being told that these vaccines are still experimental before someone rolls their sleeve up. At the present time, whilst the trials are still underway, there is no long-term safety data to refer to or rely on.

Winston Churchill scrapped ID cards to “set the people free”. Boris Johnson dismissed the introduction of a digital ID system citing concerns over loss of liberty. Yet, the UK government, led by Johnson, is now deliberating the introduction of not only digital ID’s, but so called ‘vaccine passports’ designed to restrict personal liberties for those who do not wish to be vaccinated with the new crop of experimental covid vaccines. The Royal Society has published a set of 12 criteria that should be met by vaccine passports stating the purpose of such a system, “…is to aid the return to pre-COVID-19 activities and travel without compromising personal or public health”. What the paper fails to address is the significant infringement of personal rights and freedoms which such a system will bring about. Given that the ability of covid vaccines to block transmission of the virus or prevent people from becoming infected is as yet unknown, the system fails at the first hurdle. Rather than setting people free, governments the world over are instead tightening the screws and removing our ability to live our lives in the way in which we choose. This includes the right to decide how we manage our health and by what means. As Boris Johnson so eloquently put it in 2004, “…our liberties are being lost because of the intrusiveness and incompetence of the government”. If only he was a man of his word. If you’re in the UK you can have your say on the introduction of digital IDs by contributing to the governments consultation on said subject. But you’ll have to be quick as it closes at 12pm on Thursday 11th March.

In the US, researchers from the University of Connecticut publishing in the Journal of Prosthodontics have found that rinsing your mouth with a common, easily available antiseptic, povidone-iodine (PVP-I), can kill viruses such as SARS-CoV-2 and prevent their transmission in as little as 15 seconds. The research was undertaken in order to find a way to protect dental and medical professionals in close contact with aerosols from patients. They tested three different dilute solutions (1.5%, 1% and 0.5%) for 15 seconds, 30 seconds and 45 seconds finding the 0.5% solution for 15 seconds was as effective that the higher doses and longer rinse times. You can also use Lugol’s iodine in a salt pipe at the first sign of an infection to stop an infection in its tracks. Find more information on upgrading your immune system health to help you resist viral infections in our downloadable flyer.

Eating a diet high in refined grains increases your risk of heart disease, heart attacks and dying early. Publishing in The BMJ as part of the Prospective Urban and Rural Epidemiology (PURE) study an international cohort of researchers has once again linked the development of chronic disease with diet. The team previously highlighted the link between higher consumption of carbohydrates with an increased risk of mortality and cardiovascular disease. This new study builds on that work to pinpoint the role of refined grains in driving chronic disease states, in particular cardiovascular disease, and mortality. However, unsurprisingly, the team did not find the same association for whole grains. We are getting ready to launch the 2nd (updated) edition of the eBook we released last November. Now renamed RESET EATING, you’ll find a wealth of information within the pages to help you reset your health and resilience and get future-ready! More details on the publication date coming soon.