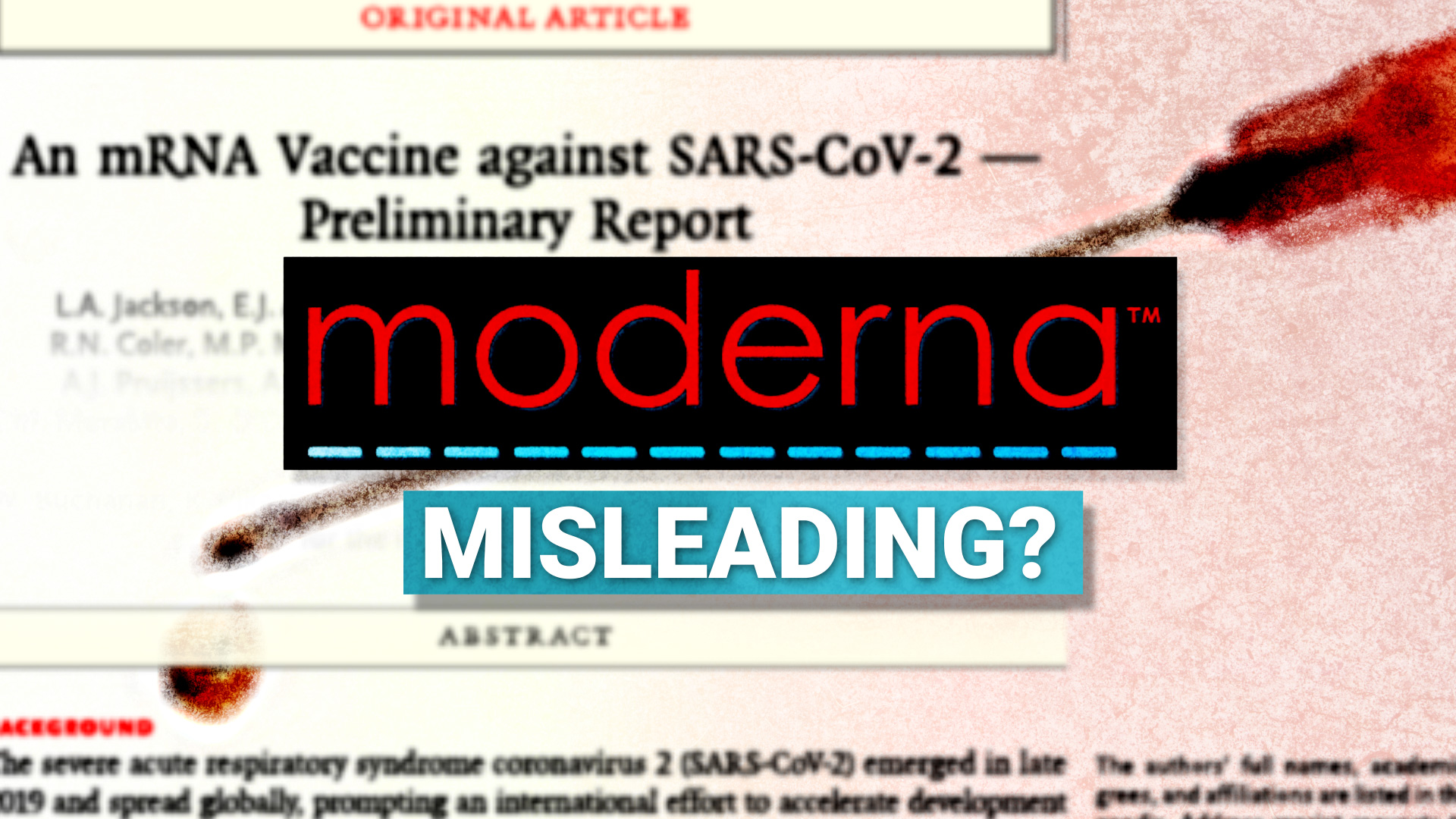 Moderna – the biotech company behind one of the vaccines most favoured for commercialisation for Covid-19 prevention – has published a preliminary report on its first vaccine trial in the New England Journal of Medicine (NEJM). The trial was led by Dr Anthony Fauci at the US National Institutes of Health (NIH). The world’s media is claiming the results as “promising”, and the results pave the way to go straight to Phase III trials involving 30,000 Americans. Warp speed development, it seems, means skipping intermediate-sized, Phase II trials.

USA Today’s coverage is typical. The headline says the vaccine “appears safe” and the article states that Moderna’s chief medical officer says “all indications are [the vaccine] will be safe and effective”.

But the hype is misleading. The abstract of the report in the NEJM states that 21% of subjects suffered “one or more severe adverse events” at the highest dose tested. Let’s be clear – every single person on the highest, and even on the preferred intermediate dose, suffered some kind of adverse reaction. But perhaps the authors and media deemed it was OK to ignore the results from the highest (250 µg) of the three doses tested because they’re dropping that in subsequent trials. This aside, what’s crucially relevant is that 80% of the tiny subset of subjects (just 14) still experienced moderately severe adverse reactions at the middle dose (100 µg) that is the one mooted for commercialisation. Yes, that’s 4 out of 5.

In case you thought it was just media spin, it’s interesting that even the vaccine safety section in the report claims: “No serious adverse events were noted” implying this was for the whole trial. This is a play with words, because serious isn't among the three rating categories for adverse events that the World Health Organization proposes: namely mild, moderate and severe (but not serious). If a reaction is severe and is viewed as "self-liming", so doesn't persist longer than a few days or longer than the trial, it's not considered serious. Even though just one severe event linked say to a neurotoxin can trigger a response in the body that might have life-long consequences. But clearly, it's not something the 33 authors from the mRNA-1273 Study Group are concerned about - and presumably being able to say they didn't note "serious adverse events" rather than having to admit 21% suffered "severe" adverse events (at the highest dose tested) makes for positive publicity when released on the world's media.

Extract from the NEJM report containing the bold and incorrect claim that “no serious adverse events were noted” when 21% of the subjects vaccinated at the highest dose suffered severe adverse events.

Moderna’s preliminary results were based on its genetically engineered mRNA vaccine (code named mRNA-1273) in this Phase I trial. It was the first to be completed in the USA, and involved just 45 subjects (between 18 and 55 years of age), divided into three groups of 15, each group receiving two inoculations, one month apart, each at three dose levels, 25 µg, 100 µg and 250 µg. The results were clearly planned to be published in the US’s leading medical journal to create maximum impact – and it puts a marker in the sand for the ensuing battle between the Oxford vaccine that’s already been tested on 14,000 people, the results of which will be published in the UK’s leading medical journal, The Lancet, on 20 July. That’s before China gets in on the act. It’s a little reminiscent of the US vs Russian race to the moon, or the Beatles vs the Beach Boys. But this time there’s a lot more at stake.

How was immunity affected?

All three doses raised antibodies and T-cell responses but there are insufficient data from this very small study to determine if the observed responses at the preferred middle dose would translate to persistent or even effective immunity in the real world, especially among older people. Therefore any claim that this preliminary report offers evidence of effectiveness is misleading at the very least. ‘Promising’ is better but that should relate only to effectiveness, and not safety, as I explain below.

The fact that the results show a T-cell response in addition to antibody response is important, given that the most effective immunity involves a double act between the humoral antibody response and the cell-mediated killer T-cell response. With SARS-CoV-2, the T-cell response might be particularly important because raised antibodies are likely to be relatively short-lived. A dive into the more detailed but very limited data shows that the T-cell response wasn’t balanced. The CD4-expressing T-helper 1 (Th-1) cells that activate the killer CD8+ lymphocytes were definitely upregulated, but there was no discernible effect on the T-helper 2 (Th-2) cells. As we know that in naturally-acquired infections only around half the T-cell responses are directed at the spike protein (the only antigenic sequence used in the mRNA vaccine), the other 50% being directed at the rest of the proteins on the viral coating, it’s unclear what these results will mean in practice. Let’s remember too, that not a single test subject exceeded 55 and the main severe disease burden is among the over-65s, the very group that also suffer a more compromised immune response (immunosenescence).

Bottom line – it is hugely premature to make any claims of effectiveness when there has been no attempt to challenge vaccinated subjects with SARS-CoV-2 in real world settings.

The safety claim is plain wrong

Let’s now delve further into what the trial tells us about safety. The highest dose yielded 21% (3 out of 14) severe systemic adverse events, with 64% being ‘just’ moderate. In fact, at this highest dose, 100% of subjects experienced an adverse event. But given the authors have decided to opt for the middle dose (100 µg) for the next trial, let’s look a little closer at these results which can be found in the supplementary data that provides a greater level of, but not nearly enough, detail (see Appendix to this story for summary results of adverse events). At this dose, a whopping 80% suffered moderately severe adverse events, and 20% mild – still 100% suffered adverse events. Yet, the vaccine is described to, and by the world’s media, as safe. When you look at the categories of adverse effect for a Phase 1 trial, they are so generalised that they tell you nothing about what might really be going on in a vaccinated person. For example, whether there might be increased risks of cardiovascular events in vaccinated people who already have heart disease, or whether longer-term conditions such as neurological disorders or autoimmune diseases could be triggered.

Moderna is the leader of the pack for the US vaccine race. The name (originally modeRNA Therapeutics) came from its focus on mRNA biotech. It’s got Fauci and Gates as backers – as well as being the ‘prodigal son’ of the USA’s vaccine catalyst machine, Operation Warp Speed. But Moderna has yet to produce a single commercial vaccine, the company having only been established in 2010, rebranding in 2016. This doesn’t stop it being NASDAQ listed, and this latest piece of manipulated news has already sent its stock prices soaring.

Investors, and the public, might do well to listen to the cautionary words of the world’s most successful vaccine manufacturer, Chair and CEO of Merck, Ken Frazier. He gives some idea of how difficult it is to produce a safe and effective vaccine when he said in an interview with Harvard Business School earlier this week:

“Let me just give you one data point. In the last quarter century, there have only been seven, truly new vaccines introduced globally at the clinical  practice... Merck has four, the rest of the world has three.”

Frazier went on to say: “I think when people tell the public that there's going to be a vaccine by the end of 2020… they do a grave disservice to the public.”

The vaccine war is well and truly on. The next big move will be when the Oxford vaccine results are published on 20 July.

Will the communication of those results be as misleading? Time will tell.

>>> Find out about our Vaccine Transparency Manifesto

Table 1. Summary findings on adverse events from the NEJM paper (n = 14 or 15 per dose group). Supplementary data from which this summary is derived can be downloaded here. 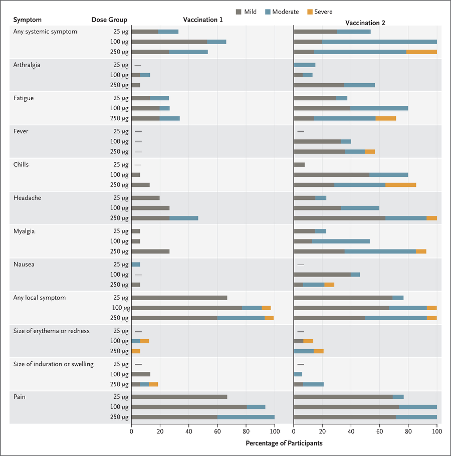