It’s World Obesity Day and everyone’s talking about how we can lose weight. Sadly, it seems it’s more ‘talk’ than ‘do’ as global obesity rates continue to soar. The US has just reached an all-time high with 40% of adults now being classified as obese.

If you’ve been sitting on the fence, wondering if moving to a drug and scalpel free ketogenic diet (KD) is a good way to lose weight and reduce your future risk of disease, you may have decided to put any plans for the KD on the back burner.

That’s assuming you got wind of some recent KD critical reporting in the likes of Science Daily and Food Navigator.

The best one – that’s had some traction in cyberspace – is the piece in the less than famous Gladstone Observer in Australia with the title “Real reason keto diet doesn’t work”. That’s enough for anyone to reach for the cookie jar – and a title like that’s guaranteed to get hits and be good if your business is selling papers or advertising space.

But does it have a scientific basis?

Do you dig Dixit?

The paper driving this negative chatter about the dire effects of “more than a week” on a KD comes from a group of researchers led by Prof Vishwa Dixit from Yale School of Medicine. It’s not bad research, in fact it’s rather good and important research, but must be interpreted only from its own limited context.

First things first; the work is entirely limited to an experimental mouse model and the KD being used on the mice was extreme, being comprised of just 0.1% energy from carbohydrate, with 90% from fat, the remainder being protein. That’s a recipe for metabolic dysregulation in itself, especially if it’s assumed that this research should be translated to humans. There can be a huge difference in the quality of food you can deliver if you compare the typical 4-5% energy from carb in a classic KD compared with the paltry 0.1% used in the latest Dixit Lab study. That’s especially the case given that non-digestible carbohydrate (fibre) is essential for proper gastro-intestinal function and gut microbiome health and is the key matrix that delivers the plethora of plant compounds (phytochemicals) that help regulate many of the body's key metabolic processes. 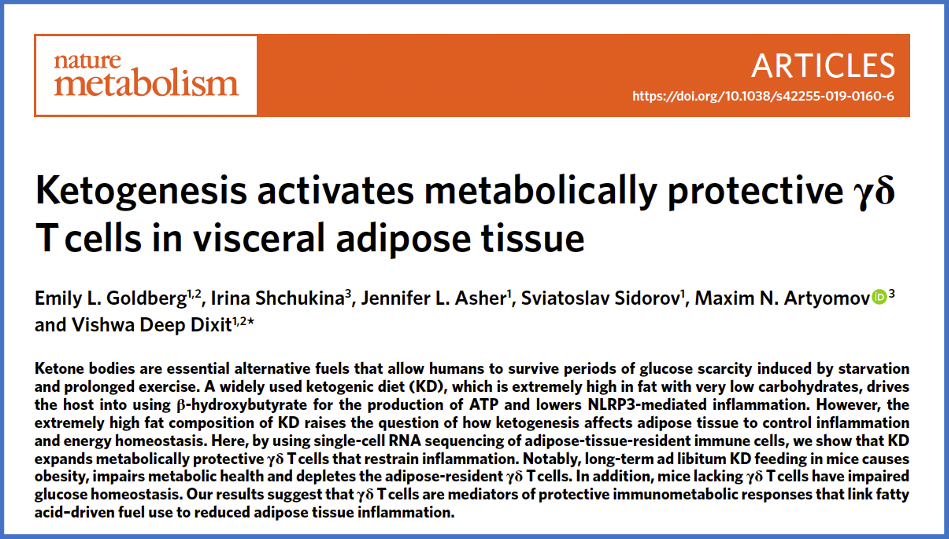 The Dixit Lab paper that kicked off the anti-keto hype

This aside, the limited context of the Dixit Lab researchers isn't anything unusual. It's the norm for most researchers who dedicate their lives to uncover mechanisms that lie behind health and disease states. These particular researchers have had a long-standing interest in understanding the mechanisms driving obesity-related inflammation and disease. Back in 2011, Dixit and colleagues found that one particular subgroup of innate immune cell sensors called the NLRP3 inflammasome are over-expressed in obese mice and people. (For anyone with a burning desire to decode this immuno-speak, the NLR stands for ‘Nod-like receptor’ and the P3 for ‘pyrin domain-containing-3’).

The same researchers also showed that, in mice, ablation of NLRP3 prevented this inflammasome activation, and that obese, type 2 diabetic humans who lost weight by restricting calories alongside taking exercise reduced NLRP3 expression and suffered less insulin resistance. Whoopee – that’s evidence that expression of the NLRP3 inflammasome in adipose fat is something you want to get under control if you are obese and want to lose weight healthily. It also tells us this is at least one of the major mechanisms that causes people who lose weight when they eat less and exercise more to lower their risk of all the chronic, degenerative diseases linked to inflammation (i.e. most) such as heart disease, cancer, type 2 diabetes, Alzheimer’s, etc.

With this work behind them, the latest exploration by the Dixit Lab researchers into possible mechanisms behind the KD is to be expected. KDs are popular, they don’t require you to stop eating or cut your calories as dramatically as caloric restriction as long as you heavily restrict carbs (but come on, not to 0.1% of energy intake!). And they have their lovely mouse model ready for use.

For our more academically-inclined readers, I’d suggest you indulge in the full paper that you can access here. But let me summarise what was found:

That’s the stuff of headlines – at least at the surface.

Why we can’t apply these findings to humans

As is so often the case, in every paper lab researchers publish, there is a tiny addition to our overall knowledge of extremely complex processes about which we understand only a small amount at present. Thank you Prof Dixit for raising the fact that in mice, allowing mice to have 24 hour access to fat as the almost exclusive carrier of energy does in the longer-term undo benefits seen in the short-term. But let’s face it, those poor animals in question were put into deep metabolic stress because the KD they were provided with did not match their evolutionary phenotype.

You could write a scientific treatise on why we shouldn’t apply the findings to our own species, especially in terms of what most people (humans, not mice) regard as a KD. In the interests of brevity, here are some of the standout points:

Clinically, the latest Dixit Lab study changes nothing. Human ketogenic diets as pioneered originally at Johns Hopkins in the 1920s for people with epilepsy are appreciably different from the Dixit Lab mouse chow. They also have close on a century of clinical data supporting profound benefits with long-term use for controlling childhood epilepsy.

They've failed to become mainstream because they don't have any drug companies behind them and because those indoctrinated by 30-years of fat demonisation simply find it too hard to accept that large amounts of fat can be healthy. It's interesting that top scientists who met last month in Washington DC to discuss fat as a food or nutrient appealed to the US government to remove the limit on dietary saturated fat, given it has no scientific basis.

The Charlie Foundation was launched in 1994 by the film director Jim Abrahams (Airplane, Naked Gun, Hot Shots! and others) after he turned around epilepsy in his son Charlie when all efforts with drugs and even brain surgery failed. Meryl Streep has been among the many long-standing supporters of the Charlie Foundation that’s been central to getting the word out about the KD over the last 25 years. More and more people, including those with cancer (malignant brain tumours especially), autism, Alzheimer’s, Parkinson’s, ALS and diabetes (Type 1 and II), many of which have also overcome obesity without yo-yoing, have found profound benefits with long-term use.

But taking into account that different people require different diets, the Foundation recognises different categories of carb-restricted diet, including the classic KD (less than 5% energy from carbs), various forms of ‘modified KD’, the Modified Atkins Diet, the Low Glycemic Diet and of course Intermittent Fasting.

Unlike the KD, the ANH Food4Health guide is not specifically a therapeutic diet. But it almost completely removes starchy carbohydrates (so it’s definitely low glycaemic), it supports an intermittent fasting approach (which means eating less often than dictated by modern day societal norms i.e. 3 main meals a day with multiple snacks in between), and is entirely gluten free (gluten is one of the most common and abundant antigens in contemporary Western diets). It also emphasises quality protein sources and the importance of a daily supply of a diverse range of phytonutrients present in nutrient-dense plant foods.

As we often emphasise, dietary quality, not just the relative proportion of carbs, fat and protein, are crucial to long-term health and vitality – and that’s the focus of our Food4Health guide that’s underpinned by well over 100 studies.

Given all the confusion around low carb diets, this was the subject of one of the presentations I gave at the Get Well Show in London a couple of weeks back.

You can view an excerpt from the presentation here and access it in full on a nominal pay-per-view basis here. Thank you for supporting our fundraising activities.