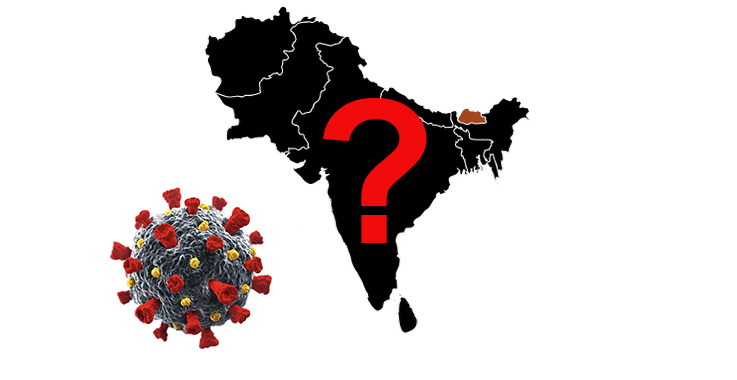 Getting under the covers of the latest concerns from India

A second wave of covid ‘cases’, hospitalisations and deaths in India is making international news (see here, and here). The apparent vigour of the surge, that includes over 300,000 daily cases and over 3,000 daily deaths over each of the last 3 days (according to Worldometer data), appears to have caught the Indian government, local authorities and the hospital system off-guard. This may in part be because of evidence dating back to September 2020, which suggested immunity from naturally-acquired infection would likely prevent or blunt any major resurgence.

The cause of the unexpected surge of infections has hit the populous state of Maharashtra including Mumbai, as well as the capital city Delhi, hardest. Various theories have been suggested, such as mass gatherings linked to the celebration of the Hindu Kumbh Mela pilgrimage and festival and political rallies. A more likely culprit might be emerging variants that are both more transmissible and potentially more harmful to those infected. 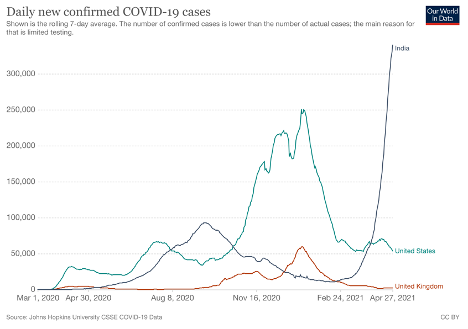 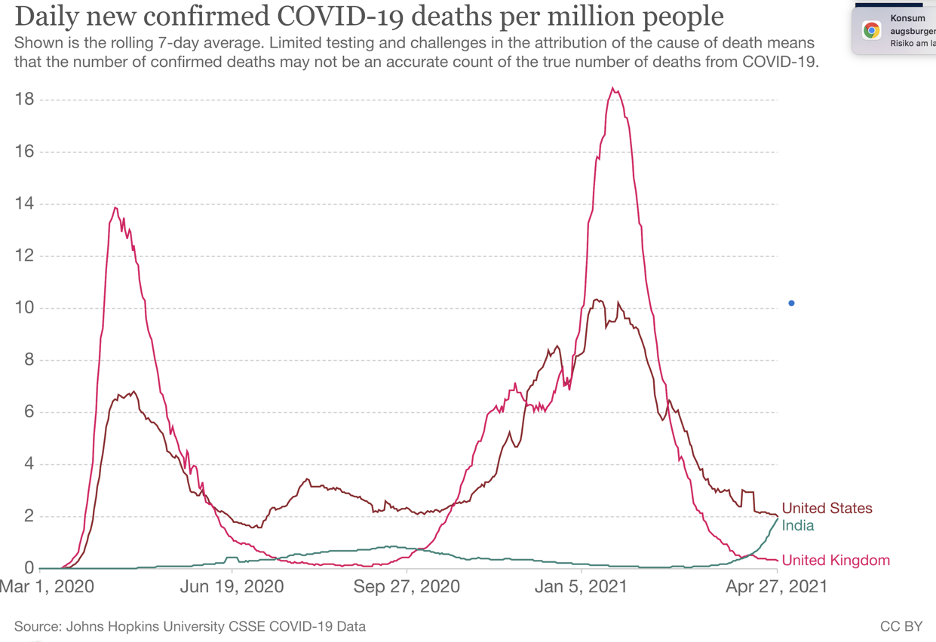 While there are breaking reports of hospitals being overrun, people being turned away, and an explosion of patients requiring oxygen support and critical care in Delhi, Mumbai and other major centres, it remains to be seen if the death rate will rise in line with reported cases (see Fig 1A for comparison with reported case rates in the UK and USA). The current claimed Indian daily case and mortality rates are among the highest ever recorded in any country during the pandemic. It is also unclear if the mortality rates will exceed those experienced in the second waves in other parts of the world, such as the UK and USA (see Fig 1B).

These disturbing figures aside, there are question marks over the reliability of the data emerging from India – with some suggesting the death toll may already be much greater than the official figures (Fig 1B above).

Could mutations be the culprits driving India’s rise in cases?

First identified in India, the SARS-CoV-2 lineage B.1.617, often referred to as a ‘double mutant’ strain, may be a significant player in the upsurge in covid-19 infections in India. Its parent lineage, B.1, has been designated a variant of concern by the World Health Organization, while B.1.617 has been labelled a ‘variant of interest‘ by the PANGO Lineage Mutation Tracker. The variant has since been reported in 21 countries (see Fig 2).

The mutation is described as having arisen as a result of convergent evolution. The variant is currently under investigation by Public Health England to determine if it should be classified as a variant of concern.

Figure 2. Transmission of the Indian B.1.617 variant between February 1 and April 25, 2021, as shown by phylodynamic mapping on GISADID.

The original B.1.617 variant has 13 mutations. It has been referred to as a ‘double’ mutant due to the common inclusion of two important spike protein mutations, the familiar immune escape ‘eek’ mutation E484Q, and L452R. A third mutation of concern is P681R. These mutations in the spike protein have been associated with other variants (such as those identified in South Africa and Brazil) and are linked to increased transmissibility and the ability to escape immunity conferred by vaccination or prior infection.

Three descendant lineages — called B.1.617.1, B.1.617.2 and B.1.617.3 — with slightly different mutations have now also been detected. Due to the mutations, it is thought these variants may be more infectious and transmissible, but there are limited data currently available to properly assess this. There are also concerns some of these sub-lineages of B.1.617 may be able to evade natural or vaccine induced immunity.

The scientific jury is still out as to whether B.1.617 is the most likely trigger for the surge. But the GISAID database shows that 65% of SARS-CoV-2 samples sequenced in the last 4 weeks were of the B.1.617 lineage. That compares with just 1.7% in the UK. The figures are however much higher in some other countries, such as 51.2% in Bahrain and 29.2% in Singapore.

Critical to determining the significance of the B.1.617 variant will be how things pan out in these other countries.

Not all experts are concerned. Peter English, for example, a retired consultant in communicable disease control based in the UK commented in an article by the Financial Times, “As only about 10 per cent of India’s population has been vaccinated, the variants are not yet under strong pressure from vaccine immunity so there is no great pressure for vaccine escape mutants to arise”. The reality, of course, is immune escape variants are already present and it seems likely that if broader based, naturally-acquired immunity is unable to hold back the surge, highly specific vaccine-based immunity will be less effective.

What does this mean for the rest of the world?

Short answer: it’s too early to tell. As most of Europe and North America has seen a steep decline in cases, India is going the other way. The B.1.617 lineage is already ‘out of the bag’ now that it has been reported in 21 countries. This means it will be the fate of infections, hospitalisations and deaths in these 21 countries,  as well as in India, that will determine how people will be affected and how governments will react.

India plans to ramp up the vaccination rate of its own people by diverting supplies from the world’s largest vaccine maker, the Serum Institute of India, which is currently making a version of the Oxford/AstraZeneca vaccine. There is anecdotal evidence from doctors in India suggesting that people who are already vaccinated are getting sick, suggesting vaccine breakthrough may be a problem – not only in India, but in other countries where the variant is already present.

As we have proposed before, it is unwise to place so much emphasis on one strategy: vaccines, when the spike protein, the primary site of mutations of concern, also provides the molecular basis for the antigen in the vaccines.

India is currently using two covid vaccines: Covishield (a version of the Oxford/AstraZeneca vaccine made by the Serum Institute of India), which was not tested in India prior to its approval, and the home-grown inactivated virus-based Covaxin (BBC152) in which the Phase 3 trial doesn’t complete until December 2022.

In a recent press briefing, the Director General of the Indian Council of Medical Research (ICMR), Prof Balram Bhargava, reported two to four people per 100,000 have tested positive for covid-19 following vaccination. 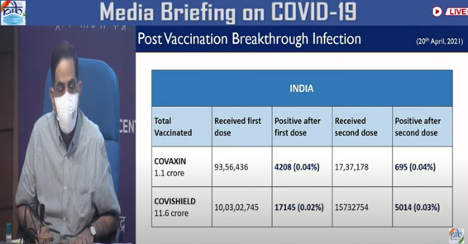 However, it is also reported that the data the government has relied on to come to this conclusion are incomplete. Prof Bhargava’s comments come following the publication of a preprint study from a team of ICMR researchers suggesting infections among the vaccinated in India tend to be milder than among the unvaccinated.

India’s surge is inevitably puzzling to scientists, given the surge appears to be particularly abrupt and is unique to India – and didn’t take off until recently, well after the new variant B.1.617 was first discovered last October. Is there a new variant of the B.1.617 lineage that has yet to be identified as being even more transmissible or virulent? Does India’s population have a unique susceptibility to this variant which has particularly potent immune escape potential? There are inevitably more questions that can be asked than answers given at this stage.

Of some interest is that India’s recent surge in infections has accompanied a significant increase in both vaccination and testing (Fig. 4), but it should be noted that while these factors are associated there is not yet any evidence that they may be causal. 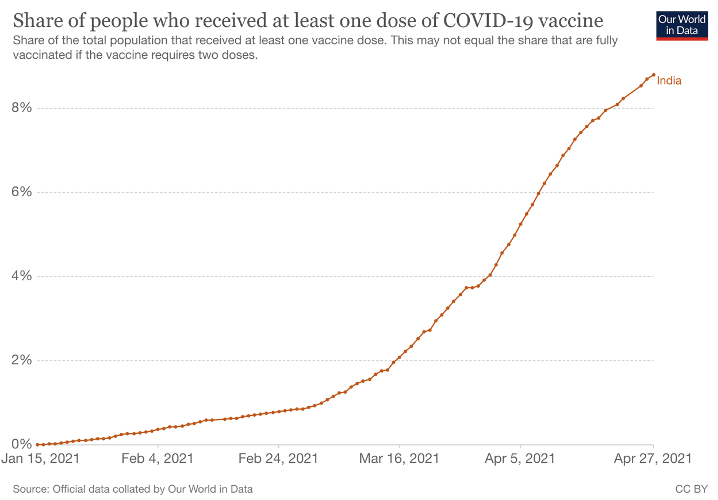 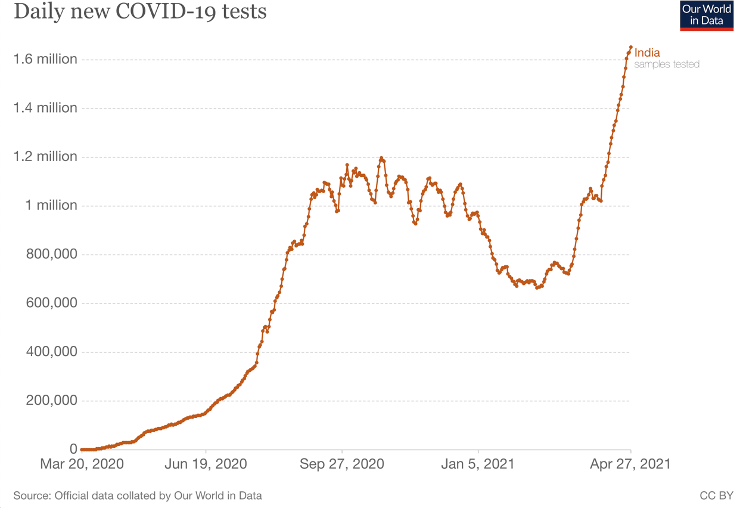 Figure 4. Covid vaccination (A) and testing (B) in India, as reported by World in Data.

What is almost undeniable, is that India’s current tragedy will be used to political ends in other parts of the world to prevent citizens returning to their normal lives.

>>> Please consider supporting our work with a donation