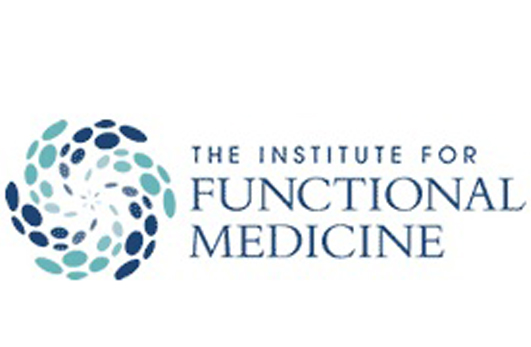 Insights and &lsquo;take homes&rsquo; from the Institute for Functional Medicine&rsquo;s 2013 annual conference in Dallas, Texas, USA

Energy is everything. Without enough of it, important internal functions as well as physical activity is limited. But the ramifications of energy deficiency go well beyond the typical list of mitochondrial diseases that are well-known to medicine; it contributes directly or indirectly to all diseases, especially chronic and degenerative disorders, ranging from chronic fatigue syndrome and fibromyalgia, to neuropathic pain syndromes, dementia and Alzheimer’s disease, through to obesity, diabetes and even heart failure and various cancers. In short, a lack of energy within the system is often the reason why the tremendously intelligent self-regulatory or self-healing systems within our bodies become compromised. 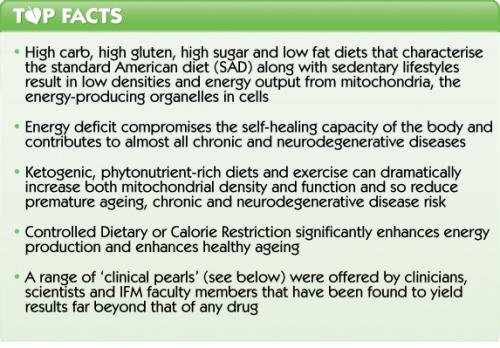 “Illuminating the Energy Spectrum: Exploring the evidence and emerging clinical solutions for managing pain, fatigue, and cognitive dysfunction”, was the theme for this year’s annual international conference for the Institute for Functional Medicine, held in Dallas, TX, held between 30 May and 1 June 2013.

Our executive coordinator, Meleni Aldridge, and I made our annual pilgrimage to the IFM conference as we have for the last 9 years in my case, and 8 in Meleni’s.

This piece aims to bring back, in layperson’s terms, what we feel are some of the most important ‘take homes’ and ‘clinical pearls’ – ones that have the ability to be life changing among those who suffer from sub-optimal energy production.

There were no more seats available at this year’s Institute of Functional Medicine annual conference, with 1200 participants present – the largest attendance to date

Key steps in cellular respiration: from glucose to ATP, via the Krebs cycle and the electron transport chain

Among the most important mechanisms for increasing mitochondrial concentration and activity are: 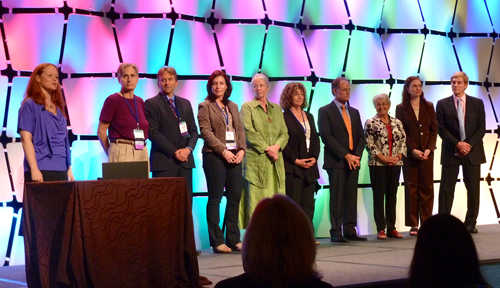 David Rakel MD, physician, researcher and author of Integrative Medicine, explained that, “Habituated neuro-networks of comfort are so hard to get out of — and they’re a good reason why so many doctors have difficulty believing the stuff they didn’t learn at med school.” Emphasising the importance of empathy in a clinician’s approach to his or her patients, Dr Rakel provided research evidence that showed that “empathy has been trained out at medical schools.” He added, “Bureaucracy expands to meet the needs of the expanding bureaucracy”.

Neurologist David Permutter MD is a strong protagonist of ketogenic, grain-free diets and exercise as the primary means of preventing or even reversing neurodegenerative diseases such as Alzheimer’s disease. In his opening lecture, he told the 1200-strong audience of clinicians, scientists and researchers that; “While the research into ketogenic diets might have started around 1921, humans first went on ketogenic diets around 2.6 million years ago.” Emphasising the point further, he said, “There is no diet than can do better than a ketogenic dietary change.”

Jeff Bland PhD emphasised that complex systems such as rainforests tended to be stable systems, while simples ones, such as a cornfield, were unstable. This analogy could be applied to energy networks in human beings, as well as their optimisation by dietary and lifestyle means. Resilience is increasingly being seen as the ultimate marker of an individual’s health. Commenting on this, Dr Bland said, “Response of the expression of your genes to your environment gives you your resilience to a changing environment”. He added, “Medicine for the individual is emerging, while medicine for the average is gone.”

Dr Bland stressed the difference between different types of fat in the body, contrasting especially ‘angry fat’ from what he referred to as “ho-ho-ho Santa Claus” friendly fat. Adding to this, he suggested that one big pizza meal with sodas (including glycated proteins, unhealthy fats and high sugar content) will “turn on the inflammasome” in the gut.

Rollin McCraty PhD, executive vice president and director of research of the Heart Math Institute, defined resilience as “The capacity to prepare for, recover from, and adapt in the face of stress, challenge or adversity.”

Anthropologist and shaman, Alberto Villoldo PhD, founder of the Four Winds Society reminded participants that over the majority of the 2.6 millions years of human existence, humans were not so much hunter/gatherers, but scavenger/gatherers. He said that hunting was always difficult and we ate what we could and had to endure long periods of fasting between meals. Summing up, he opined: "A bunch of guys would go out and find some roadkill, clean it up, then come back and say 'hey honey look what I've caught for us to eat, can we have sex now?” He added that during fasting, the insulin/glucose control system was turned off and that we had to go into the ketogenic state to fuel the brain. Which is why we're so well adapted to fasting rather than feasting!