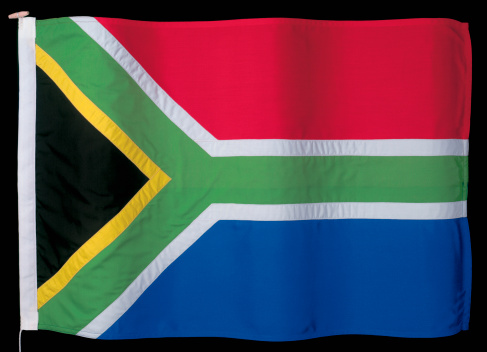 ANH-Intl reviews an important and inspiring week in South Africa that could bring about a sea change in how South Africans manage their health in the future&nbsp;

This week has seen two revolutionary events in South Africa relating to natural healthcare. One involves South Africans challenging an EU-style regulatory juggernaut that has been pushed through the country’s parliament. The other is about a dietary revolution that is causing thousands to junk advice given to them by medics for years — with spectacular health benefits! 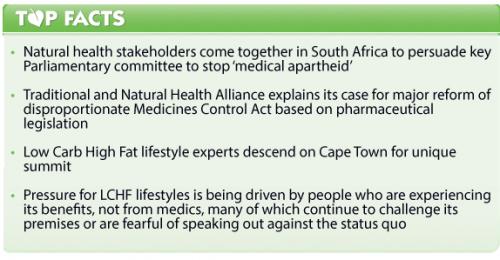 You will recall that our friends at the Traditional and Natural Health Alliance (TNHA) have been working hard to repeal the recently passed Medicines Control Act in South Africa that is otherwise set to decimate the practice of natural health. That means stopping thousands of South Africans from using traditional herbs and other natural medicines that have been part of their culture for hundreds of years. If left to bite fully, the legislation would also spell the end to innovative nutraceuticals that are a key adjunct to more modern systems of natural health practice, such as functional medicine.

Today, the TNHA delegation, led by chairman, Dr Bernard Brom, Phephsile Maseko, representing South Africa’s 70,000 or so traditional healers, and TNHA’s founder and secretary general Anthony Rees, have made their second presentation to the Parliamentary Portfolio Committee on Health.

They have delivered a nearly 30-page report, with input from ANH-Intl’s Rob Verkerk, to support their views. The TNHA has made a powerful case that the legislative model that governs pharmaceuticals has no place for natural health products, be they either traditional medicines or nutraceuticals.

Dr Brom told the Parliamentary Committee, “Why would any authority want to place green tea, in its leaf or encapsulated forms and placed in a bottle with claims of being an antioxidant, in the same category as aspirin or paracetamol? It surely has much more in common with a cup of black or rooibos tea than it does with paracetamol? The latter drug, by the way, is the most common cause of liver transplants in children”.

But Anthony Rees remains upbeat, like any good revolutionary in for the long haul. He told us before the meeting that the committee are likely to be listening carefully because they know perfectly well that the TNHA has a powerful card up its sleeve. It is well known that it is poised, with the support of leading constitutional lawyer Mario Ambrosini, to launch a challenge to repeal the Medicines Control Act if they don’t get what they want.

The group interacts regularly with ANH International and we have been stunned by the similarities between the Medicines Control Act and various pieces of EU legislation. None of this should be a big surprise given that the EU played a role in making it this way.  In essence, a high pre-market data threshold is built into the legislation which places a major and disproportionate obstacle in the way of smaller companies, much like the EU’s legislation on so-called traditional herbal medicines.  As importantly, key principles, such as the presumption of safety and traditional intended usage for products or ingredients with long histories of safe use have been thrown to the wind.

TNHA is the only stakeholder group that has been invited to go back to the Parliamentary committee. TNHA is calling for different frameworks to be developed specific to the needs of each of the different paradigms; it argues that a western drug model works neither for nutraceuticals or traditional medicines. The group wants to see the establishment of a separate directorate in government to oversee these different paradigms and it is very alive to the need to ensure this is populated with sufficient numbers of specialists in their respective disciplines. The group also knows this might require some new legislative instruments to make happen, such as a Private Members Bill.

This is about a few people working together to protect the futures of many thousands or even millions. Most simply put their head in the sand. We’ll keep you posted on progress.

Cape Town is the epicentre of a revolution in health care. It’s not one being led by medics. It’s a people-power, bottom-up revolution. It’s about people discovering that when they ditch 30 years of government and medical advice on nutrition, essentially that you make carbs your main staple and limit fat in your diet, you may find yourself experiencing a dramatic turn-around in your age-related decline in health. So palpable is the revolution, low carb/high fat (‘Banting’) café’s and restaurants are seemingly popping up on every street corner in Cape Town.

So it’s entirely fitting that a historic event relating to the rapidly emerging area of the low carb high fat (LCHF) lifestyle should be made in Cape Town. For the first time anywhere in the world, international experts came together in the city for a 4-day summit between 19 and 22 February. The purpose was to air their views on the science and practice of the low carb high fat (LCHF) lifestyle. Mainstream medics were conspicuously absent, seemingly fearful that they may be made to feel stupid.

The conference was the brainchild of Karen Thomson ex-model, self-confessed ex-cocaine and sugar addict, and granddaughter of pioneering heart transplant surgeon, Dr Christian Barnard. It was co-hosted by leading South African sports scientist, Professor Tim Noakes, who has become controversial among the mainstream medical community for stepping outside the box. 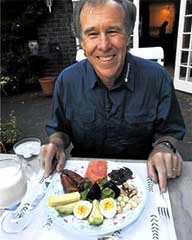 He then lost his father to diabetes and started, himself, to become insulin resistant, or glucose intolerant, the precursor to full-blow type 2 diabetes. He gained weight and his running times increased. Call it the predictable consequences of old age if you like.  Or allow the experience to engender a ‘road to Damascus’ moment. Tim Noakes did the latter. He was then inspired to pull together the available research, mainly from colleagues in the USA, and this led to what has become known at the ‘Noakes Diet’. He co-authored the South African best-seller the Real Meal Revolution, and established the Noakes Foundation which is a “Non-Profit Corporation, to share….the truth about a healthy diet. To share the very best evidence-based advice possible, free from conflicting commercial influences”.

View below an online interview made during the conference by Gary Kirwan of Biohackers Lab. It features Karen Thomson, Dr Aseem Malhotra and Christine Cronau.

South Africa is far from the only place this revolution is happening. There are seeds of it all over the world, including here at ANH International. ANH’s Rob Verkerk has followed a journey with his own health that isn’t dissimilar to that of Tim Noakes. Over his first year on a ketogenic diet, reflected in the ANH Food4Health Plate, he lost both his pre-diabetic status and around 25 kg in body weight. His energy soared and the weight has stayed off. With Rob, it’s cycling not running that’s his primary physical pursuit, and when he’s got time around his hectic schedule, he provides support to the Dorking Cycling Club race team. He said “A few years ago it would have been unthinkable that I could ride with cyclists of that level. Now I relish it”.

The organisers now want to take the conference to the US and UK. The revolution is happening somewhere near you – join it!