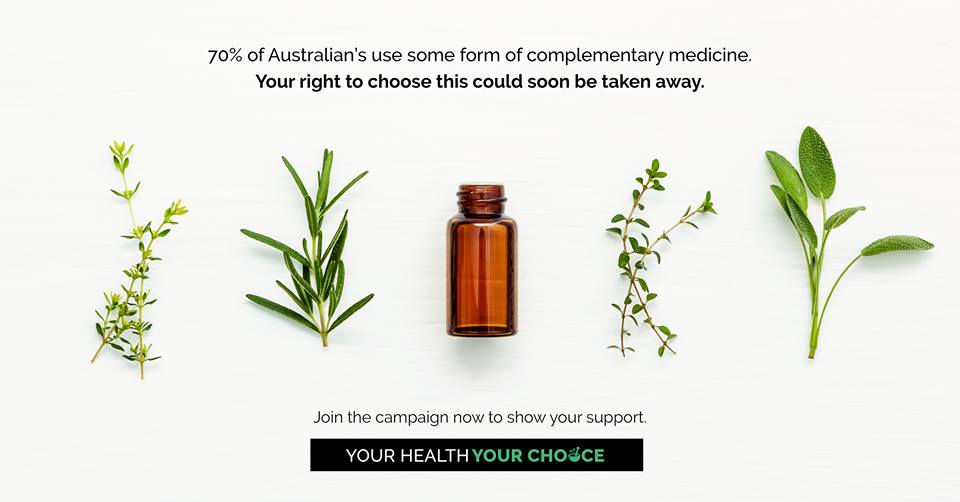 Your Health, Your Choice campaign launched in Australia - our right to choose Traditional complementary and alternative medicine (T&CM) is under threat

In Switzerland the use of homeopathy, anthroposophic medicine, herbal medicine, acupuncture and traditional Chinese medicine is covered by health insurance. The right to choose use of complementary medicine is included in the Federal Confederation. This is in stark comparison to Australia where the Australian National Health and Medical Research Council (NHMRC) published a report damning homeopathy and is actively trying to remove access to homeopathy from the public.

Fierce debate about the efficacy (or otherwise) of homeopathy has been raging for a long while. Proponents swear by it, those in opposition dismiss it out of hand in the same way as Flat-earthers deny all evidence that the earth is round! For some it seems to have become a personal vendetta to demolish homeopathy and deny people their right to choose how they care for their health.

The prevalence of T&CM usage worldwide can no longer be ignored by the practitioners of evidence-based medicine. The burden on healthcare systems around the world is growing daily. And like it or not, a large percentage of the world's population relies on and/or uses some form of Complementary, Alternative or Traditional Medicine. Individuals want to use T&CM and are prepared to pay for it.

In the US 1 in 5 people used T&CM therapies in 2012. The Ministry of Ayush in India continues to support homeopathy around the world having signed a number of agreements, in 2016, with countries including Armenia, Canada, Argentina, Germany and the WHO to support homeopathy. They are also supporting Traditional Medicine in Myanmar, Israel, Tajikistan, Peru, Russia and Tanzania and United States Pharmacopeia.

In Africa there are an estimated 200,000 traditional healers where approximately 80% of the population depend on traditional medicine for their Primary Health Care.

When one size doesn’t fit all

Homeopathy cannot be scientifically investigated in the same way as mainstream science, despite continued assertions by skeptics that “There’s no measurable active ingredient, so homeopathy can’t work”. Because they are based on different principles, homeopathy requires a different kind of science, one that is continually denied to both homeopathy and most other T&CM therapies. At the end of the day, where does it say that because we don’t understand something ‘scientifically’ it can’t have benefit?

Your right to choose your healthcare is under threat

Currently there is a choice for people as to whether or not they use T&CM therapies. However, that choice is now under threat, worldwide.

In the UK T&CM therapies are under threat on a number of fronts. The Charity Commission recently undertook a review of charities that support T&CM therapies. The consultation was instigated by a group of skeptics who are at the forefront of attacks on homeopathy in the UK. The NHS is gradually squeezing the use of homeopathy out by closing facilities and reviewing funding of homeopathy on the NHS. The latest attack comes as the NHS reviews spending on medicines deemed to be low-value including homeopathy and herbal treatments.

The highly flawed, inaccurate and misleading Australian report on Homeopathy compiled by the NHMRC is being used as justification for regulatory changes which could restrict access to homeopathic medicines in Australia. If this happens, a precedent is then set for other countries to follow suit, citing the Australian report as sufficient evidence.

Australians are uniting to protect their right to choose T&CM via the 'Your Health, Your Choice' campaign. By supporting this campaign you can protect your right to choose how you support your health too.

Although the campaign aims to protect the public’s right to choose T&CM as a whole, the website will generate a petition calling specifically for an Australian Senate inquiry into the NHMRC 2015 report on Homeopathy.

Registrations of support from other countries will demonstrate to the Australian government that ‘the world is watching’.

The Senate inquiry would be in addition to, and even more powerful than, the on-going Ombudsman challenge by the Australian Homeopathic Association (AHA) and Homeopathic Research Institute.

It is clear that the NHMRC report is not only threatening homeopathy in Australia, but worldwide. The report has already had a significant and detrimental impact on homeopathy at an international level, so the importance of exposing its flaws cannot be understated.

A few words from Rachel Roberts, of the Homeopathy Research Institute about the current campaign.

Join the 'Your Health, Your Choice' campaign now - it's easy:

Find out more about maintaining your Freedom of Choice in how you support your health and access to natural healthcare.