Principle 4 of the UK’s National Health Service (NHS) Constitution states “It should support individuals to promote and manage their own health. NHS services must reflect, and should be coordinated around and tailored to, the needs and preferences of patients, their families and their carers.” If so, why has it been found necessary to undertake a review of these services that will, in effect, restrict fundamental patient choice and preferences while at the same time contravening its own Constitution?

We set out below the key aspects of our response to this extraordinarily short-sighted consultation.

The consultation proposes the removal of NHS patients’ access to the following natural medicines as items of low ‘clinical effectiveness’, despite growing demand from patients for these interventions:

However, the lack of an understood mechanism is completely irrelevant to any decision over whether an item should be available for prescription or not. What is relevant are: (1) evidence of benefit, (2) potential safety concerns and (3) – perhaps most tellingly - patient demand. We are greatly concerned that there is a clear lack of consistent application of evidence and clinically based risk/benefit assessment in relation to alternative options in selecting items for removal. This allows biases to occur, with some items that involve negligible spend being itemised (e.g. herbal medicine and not just traditional herbal registered [THR] products) and other items being omitted.

UK citizens are so concerned about the restriction of these rights they started a petition in protest, calling on the Government and NHS to allow ongoing prescription of the targeted natural therapies. Despite the consultation still being open, as the petition had reached a trigger point of 10,000 signatures, the Department of Health chose to respond in a definitive manner, appearing to endorse the furthered restriction of patient choice.

Find out in our Call to Action below why UK citizens and residents must write to their MP now and ensure this top-down, undemocratic and discriminatory restriction of freedom of choice must be stopped. NOW!

Despite the consultation’s assertions that there is a lack of robust evidence of clinical effectiveness or there are significant safety concerns, there are in fact many studies that underpin the efficacy and safety of the natural medicines under review.

Substantial evidence exists of benefit from multiple studies for glucosamine and chondroitin, including the assessment of the Cochrane Collaboration, plus a corresponding very low risk of side effects for patients with osteoarthritis.

A powerful example lies in St John’s wort as a treatment of mild depression. The balance of evidence shows St John’s wort is at least as effective as SSRI drugs and at least as important - the safety profile was on par with placebo, which implies a considerably more beneficial risk/benefit profile than ‘conventional’ SSRI treatment.

While the 2017 Cochrane review is cited as the primary reason for dropping lutein and antioxidants for treatment of age-related macular degeneration (AMD), the review blatantly neglects key studies using optimal combinations or dosages of nutrients for eye health. Much more importantly, AREDS2 (also 2017) shows a positive effect against AMD, demonstrating a clear benefit between naturally sourced remedies and this condition.

The groups proposal to advise Clinical Commissioning Groups (CCGs) that prescribers in primary care should not initiate Omega-3 Fatty Acids for any new patient, and to advise CCGs to support prescribers in deprescribing Omega-3 Fatty acids in all patients and, where appropriate, ensure the availability of relevant services to facilitate this change is viewed as deeply irresponsible in the face of all the available science. There is especially strong scientific evidence from human trials that omega-3 fatty acids from fish or fish oil supplements (EPA + DHA) significantly reduce blood triglyceride levels.

It’s not about cost saving

Approximately £9.2 billion was spent on prescription medicines in the UK last year. Were this consultation really about achieving value for money and safety of treatments, as stated in the guidelines, there are many other items that should be included. As can be seen in the graph below, the cost of the therapies under threat is negligible compared to that of the costs of drugs that serve a similar therapeutic purpose. 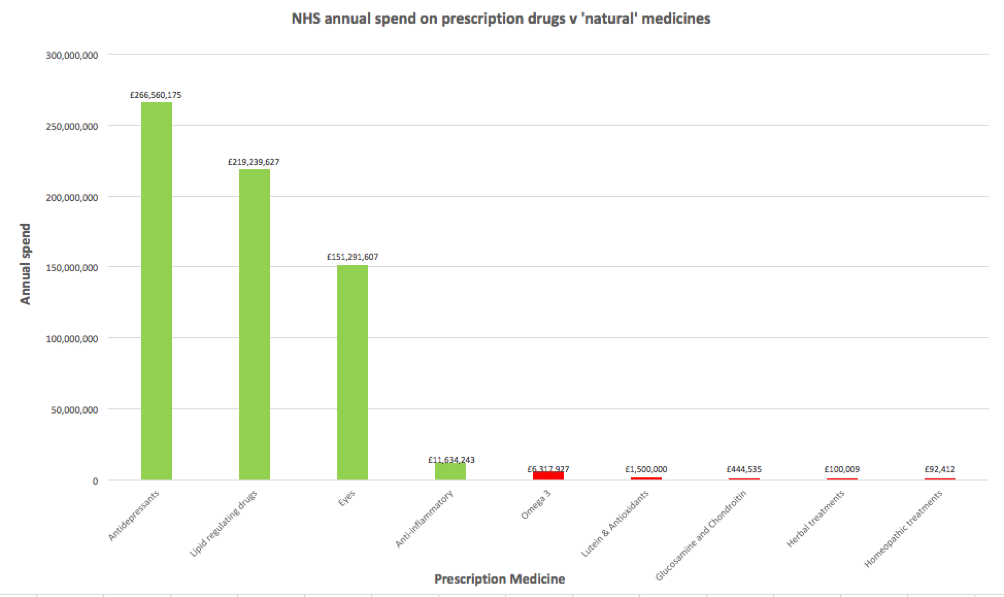 What should be of most importance is the cost saving to be made by the NHS by empowering people through the use of these natural therapies to take more responsibility for their own health thereby reducing the burden on an already overburdened system.