Home News Germany: giving (vitamins) with one hand, taking with the other

Germany: giving (vitamins) with one hand, taking with the other

The BfR in Germany goes off-piste with the science – again

The Federal Institute for Risk Assessment (Bundesinstitut für Risikobewertung [BfR]) published a paper earlier this month in the Journal of Consumer Protection and Food Safety that sets the scene for how it proposes the German government should handle maximum levels of vitamins and minerals in food supplements and fortified foods. Germany, like other EU countries, is taking the issue into its own hands in the knowledge that the European Commission has parked its plans to harmonise these levels EU-wide.

The paper, published in the German language with an English abstract, continues to rely on a scientifically flawed approach to risk assessment that we comprehensively exposed in the peer-reviewed journal Toxicology in 2010. The results of the current analysis, based on a greater body of available research, has resulted in some wins and losses in its maximum daily recommendations compared with its previous reports from 2004 and 2005.

It’s hard to have real winners when the BfR is using a scientifically flawed model. But there are at least some vitamins that have proposed maximum levels that are greater than those set by the BfR in 2004. We’ve given these a green traffic light rating (see Table below).

Vitamin B1 (thiamin), vitamin B2 (riboflavin), pantothenic acid (B5) and biotin no longer have maximum permitted amounts in recognition of their extreme safety and water solubility.

Also, moving in the right direction, compared with the 2004/5 BfR reports, were proposed increases in maximum daily amounts for vitamin D, niacin (as nicotinic acid, niacinamide and inositol hexanicotinate), vitamin B12, vitamin C, vitamin E, iron, copper, zinc, manganese and selenium (see Table below). In many cases, these increases are trivial so as to make no real difference physiologically – and certainly not therapeutically (a notion that is entirely prohibited by EU and German authorities).

However, in many cases these increases are nothing like those that should have occurred had the BfR followed a more scientific approach. As we have also demonstrated in another journal article in Toxicology in 2010, the scientific approach should be one based on risk/benefit assessment. Such an approach would result in levels that don't discriminate against the majority of the population using an overly precautious approach centred around the most sensitive members of the population.

Astonishingly, the BfR fails again to take into account the effect of micronutrient form, and so applies the risk associated with iron sulphate to iron bisglycinate, the risk of magnesium oxide to magnesium citrate, and so on. Given the outpouring of research on the subject, it ignores any differences between the risk/benefit profile of vitamin K1 (phylloquinone) and K2 (menaquinone). 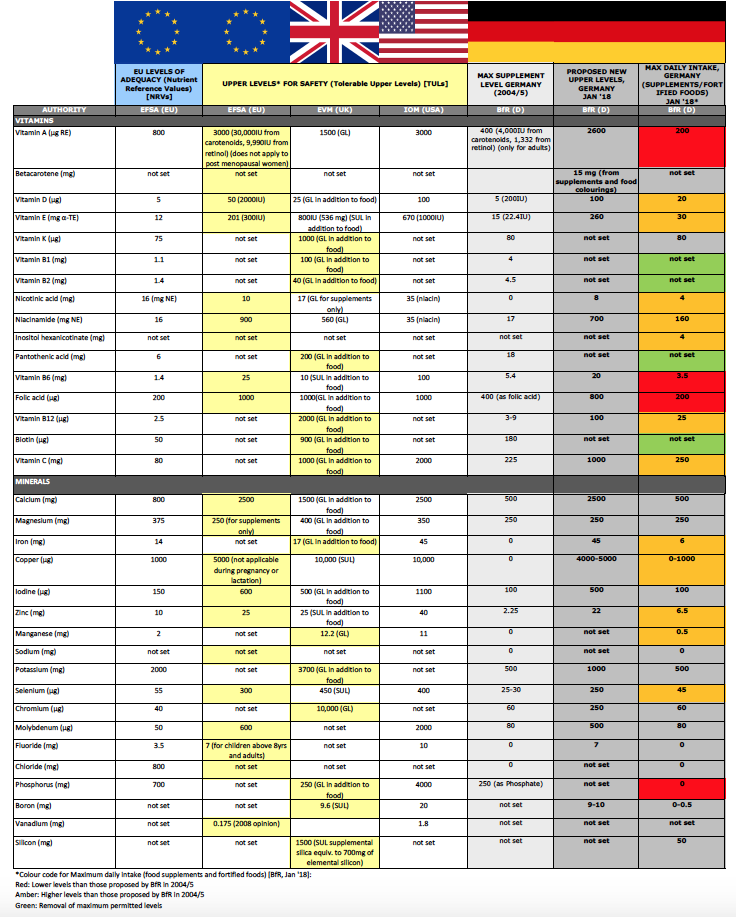 Table: Comparing reference levels of micronutrients in the EU against those of Germany from 2004/5 and 2018 respectively

The latest BfR report shows once again how Germany is prepared to go against the flow of both the science and the law. The European Commission (EC) has in the past successfully challenged national authorities (e.g Commission v Austria, Case C-150/00) for disproportionately restricting vitamins selling freely and safely in other EU Member States and so interfering with the function of the single EU market. If companies don't try to defend their rights to free movement of goods, a right that Germany is required to respect as a result of its obligation under the Treaty on the Functioning of the European Union, the EC may need to strike again.

Germany may well need to face the courts in the future and is far from guaranteed a win.

At ANH-Intl, we are continuing our work on risk/benefit analysis and are expecting to see the results of this work used initially in national courts within the EU later this year.