Home News Vitality and the Republic of Ireland unite again!

Vitality and the Republic of Ireland unite again!

Something magnificent happened this last weekend (8-9 September 2018) in Dublin, Ireland. Replete within the village-atmosphere that’s almost guaranteed in the emerald isle, was the Vitality Expo. After a 6-year reprieve, natural health experts, the natural products trade and consumers came together to celebrate, demonstrate and share what is one of the most vibrant examples of natural health - anywhere in Europe.

Along with experts from Ireland, the UK and other parts of Europe, our founder, Rob Verkerk PhD delivered three presentations over two and a half hours to rammed audiences. The topics included our soon-to-be unveiled health system sustainability blueprint, the theory and practice of mitochondrial health and the sometimes confused and controversial area of low carb high fat (LCHF) diets. During her own presentation, Meleni Aldridge, ANH-Intl executive coordinator, shared her deep insights on the thyroid, gathered, somewhat ironically, after the surgical removal of her thyroid gland some 35 years ago after she succumbed to an autoimmune disease.

The show was presented by Health Stores Ireland (formerly, the Irish Association of Health Stores) - to which Rob has been scientific advisor for the last 15 years. Given the incredibly positive feedback we received over the weekend, there’s no doubt the new organisers, Independent News & Media PLC and Eventhaus Ltd, pulled it off.

Rob was interviewed both by Ireland’s Independent newspaper and by the PR arm working with the event organisers. They picked up particularly on his statements about sustainability and the grave risk of over-doctoring and pharmaceutical dominated healthcare that’s been shown to shorten female life expectancy in particular and has been linked to greater all-cause mortality. 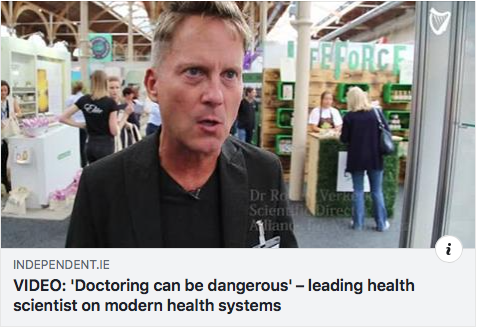 One of the drivers of the very high levels of public interest in natural health in Ireland is, without doubt, the GP fee. This means that most adults, except the small proportion with medical or GP visit cards, face a fee of around €60 every time they see a GP. The financial barrier to their GP means they are able to balance what they’re going to get from their doctor (perhaps a diagnosis and probably a prescription for the treatment of symptoms but not the cause of their health concern) against what they might be able to get elsewhere. That might be advice they get from a natural health practitioner or one of the Irish health trade’s highly competent and highly trained retail staff in independent Irish health stores. All of this with the reassurance of a potent code of ethics. Yes, they might also walk away with a collection of foods, herbs and/or supplements - and if it works, the cycle repeats. That’s a big part of the Irish experience and the success of the Irish health trade. 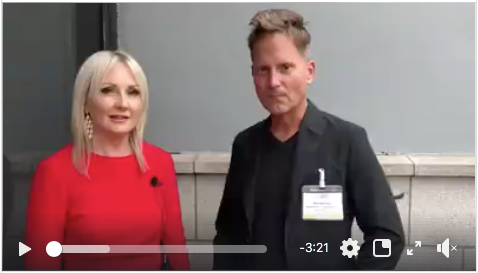 Rob Verkerk talks with #PRPam from Hashtagmedia.ie and #socialtv talks to Rob Verkerk at Vitality Expo about sustainability

The B-word came up many times over during our many discussions over the weekend. Many of the discussions centred around what might happen if a very diluted Brexit - or even a No Deal was reached come end of March 2019.

Ireland, especially north of the border, has played a key role in how things have unfolded since the referendum. Issues over how to handle the Irish border are still unresolved and, of course, Theresa May owes her tenure as Prime Minister and her party’s position in Government to the coalition made with Northern Ireland's Democratic Unionist Party (DUP).

Some of the Irish companies we talked were quite positive about how a ‘no deal’ Brexit could work to their advantage. US and international companies that have long used the UK as their springboard into the EU market could shift their focus to Ireland. With its common language, access to cheap labour and with no plans to exit the EU, it could make a for a good location as an EU launchpad.