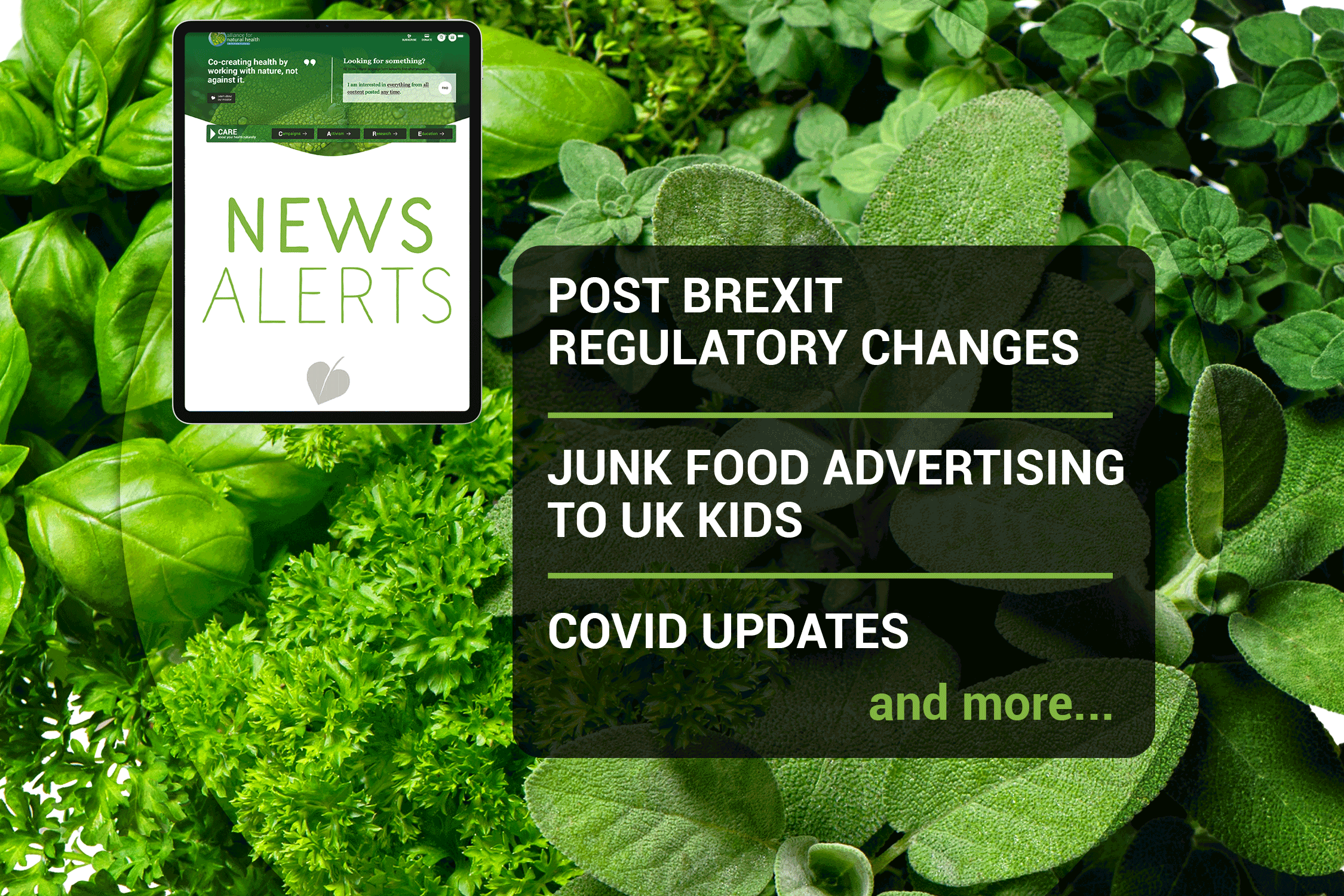 A new report from the UK government’s Task Force on Innovation, Growth and Regulatory Reform (TIGRR) sets out recommendations for a new regulatory framework to oversee the burgeoning and successful food supplement industry. It recommends that a new organisation is created to link the work of the Medicines and Healthcare products Regulatory Agency (MHRA), Food Standards Agency (FSA) and Department of Health and Social Care (DHSC) in order to create a simpler and smarter system that will provide a clear pathway to market for innovative science-backed products. The report also calls for a system that recognises the relationship between pharmaceuticals and nutraceuticals suggesting supplements should be science backed, the insinuation being that trial data will be needed for products to be approved. Such a system would potentially leave the door wide open to both Big Pharma and the regulators to effectively kneecap what is currently a thriving, vibrant and innovative industry. Such action will not only damage the industry but significantly impact supplement quality, availability and consumer choice.

New rules on the advertising of ‘unhealthy’ foods to children have been announced by the UK government. Large manufacturers of foods deemed to be high in fat, sugar and salt (HFSS) will only be able to advertise their products between 9pm and 5.30am across TV and on-demand services. An exception will be made for the 'healthiest' foods in each category such as honey, olive oil, avocados and marmite. Small and medium-sized businesses will be able to continue advertising through the restricted hours. Government advisors have estimated the move will remove up to 7.2 billion calories from children’s diets each year and reduce the number of obese children in the UK by more than 20,000. What the government appears to have overlooked is that HFSS products will still be on sale in supermarkets and out-of-home outlets, whilst advertisers will continue to be able to target children through social media platforms, billboards and product placement. The UK government had a perfect opportunity to make lasting and meaningful changes to its dietary advice that underpins what children are taught but it has once again fallen far short of the mark — or more accurately, in favour of crony big corporates. The ANH International Food4Kids guidelines offers a wealth of advice to protect and promote healthy, resilient and robust health in childhood and beyond.

Could long covid be caused by latent Epstein Barr virus (EBV), a member of the herpes family of viruses, being ‘switched on’ rather than as a direct result of the SARS-CoV-2 virus. A new study published in Pathogens found 68% of long covid patients studied had experienced reactivation of EBV. At least 50% of the population is infected with EBV and for most people it’s harmless and symptomless. But if it’s activated, or reactivated, it can cause health havoc. EBV has long been associated with the onset of myalgic encephalomyelitis/chronic fatigue syndrome (ME/CFS). According to a report from researchers at Imperial College, London, over two million people in England could be suffering from long covid. However, read further than the scary headlines and you’ll find that out of 508,707 people who completed surveys, as part of ongoing REACT-2 studies, a measly 2.2% reported experiencing at least three ongoing symptoms for 12 weeks or more. Dare we say that media reports are once again dialling up the fear in order to drive people to be vaccinated? The good news is there is plenty that you can do to combat post-viral syndrome, whatever the cause, using a functional and integrative medicine approach to regain your health and resilience.

An emergency meeting of the US Advisory Committee on Immunization Practices (ACIP) concluded there is a likely association between mRNA covid-19 vaccines and an elevated risk of heart problems in teenage boys and young men. The statement has prompted the US Food and Drug Administration (FDA) to add a warning to covid-19 vaccine information sheets. A probable link between covid vaccination and heart inflammation (myocarditis) has already been found by Israeli researchers. Meanwhile the vaccination of children and young people carries on in the USA even though more and more reports of young people who have died or been permanently harmed by these vaccines continue to surface. A study just published in JAMA Cardiology detailing a case series of 23 previously healthy soldiers who developed myocarditis within 4 days of receiving a 2nd dose of covid vaccine, further highlights the very real risk to young people from covid vaccination, even though their risk from covid-19 illness is minimal to say the least.

Those who suffer mild covid illness develop long-lasting natural immunity. Researchers publishing in Nature found that although antibodies declined rapidly after the first 4 months following infection, people developed long-term immunity through memory B cells, which is likely to persist for life. The findings echo the World Health Organization’s (WHO) recent report on covid-19 natural immunity, which found natural infection created robust protection for at least 6-8 months. The new study supports what we’ve been saying all along, that vaccines are far from the only way to create long-lasting natural immunity.

The number of children under the age of 17 taking antidepressants in the UK has hit an all-time high during the pandemic.  According to a report published in the Pharmaceutical Journal, antidepressant use in children increased by 40% compared to five years ago. The increase has been fuelled by the draconian restrictions and fear-driven messaging promoted by the government. Many children now have serious anxieties about normal everyday social interactions, which is affecting their mental health and leaving some children too scared to even leave their house. The trauma caused by the handling of the coronavirus crisis by governments is likely to leave invisible, yet indelible, scars on our most precious resource that could blight them and their health for the rest of their lives.

Lisbon court rules number of Portuguese covid deaths is only 152

A court in Lisbon has ruled that the number of verified deaths in Portugal from covid-19, between January 2020 and April 2021, should be 152 and not "more than 17,000" as claimed by official sources. The judge stated that all the other deaths were from other causes, even though they may have had a positive PCR test. The judgement throws death counts around the world ‘due to covid’ into disarray, although this is not new news to those who’ve been following the situation closely over the past 15 months.

Oxford University has announced it will be carrying out a study as part of the PRINCIPLE trial, into the use of ivermectin for the treatment of covid-19 trials. The announcement follows hot on the heels of the publication of a meta-analysis by Dr Tess Lawrie’s team showing the efficacy and safety of ivermectin. The timing is very odd given it had been mooted both in January and then again in May this year, but was only given the go ahead after Dr Lawrie’s paper was published. Responding to the news, an exasperated Dr Lawrie said, “Contrary to mainstream media’s misleading reports, the evidence is that ivermectin has already been clearly proven to work against Covid. In fact, there is more evidence on ivermectin than on any other treatment option for Covid and far more safety data than any of the novel therapies. More placebo-controlled clinical trials of ivermectin are unethical and are definitely not needed. The data is clear; ivermectin works.” In a further twist, the Covid19 Assembly is leading an attempt to halt the new trial amidst fears that it is being set up to fail in a bid to discredit the use of ivermectin.

Why have coronavirus genome sequences been deleted?

A new preprint study suggests the coronavirus crisis may have started much earlier than has officially been stated after one of its authors recovered genome sequences that had been deleted from a US government database. Why the sequences were deleted remains a mystery and begs the question as to what may be being covered up.

The World Economic Forum has thrown its hat into the censorship ring with the announcement of the formation of the Global Coalition for Digital Safety to “…take coordinated action to reduce the risk of online harms…”. One of its main focuses will be vaccine misinformation.

Earlier this year we reported on the gagging of doctors. As more and more doctors, scientists and healthcare professionals speak out, the list of covid censorship casualties is rising. Canadian doctor Francis Christian has been suspended by the University of Saskatchewan for questioning the vaccination of children. In a chilling call (recorded by Dr Christian) with University representatives question the mental health of Dr Christian.

In the UK, a GP who resigned from his job due to his concerns over covid-19 vaccine safety has been suspended, preventing him from practising within the NHS. Similarly Dr White’s mental health was also questioned by a senior clinical advisor during a call informing him of his suspension.

In Luxembourg Dr Ochs faces a one year ban from practice for allegedly spreading misinformation. The allegations against him are that he stated masks are toxic and that he treated covid-19 patients, all of whom are reported to have recovered, with unauthorised medications and that he has expressed doubts about covid vaccines.

In New Zealand the Medical Council has warned that doctors who speak out are at risk of losing their job. The move comes after dozens of doctors signed an open letter voicing concerns about the safety of the Pfizer vaccine.

We are now at a point where anyone who dares to criticise or go against the mainstream narrative is simply being removed. Dare to raise your head above the parapet and you're at very real risk of having it chopped off. However, those trying to silence dissenting voices seem to have overlooked the simple fact that once someone has lost their livelihood they no longer have anything to lose by continuing to speak out loudly and proudly!