Home News Will science and law be our oppressors or our saviour? 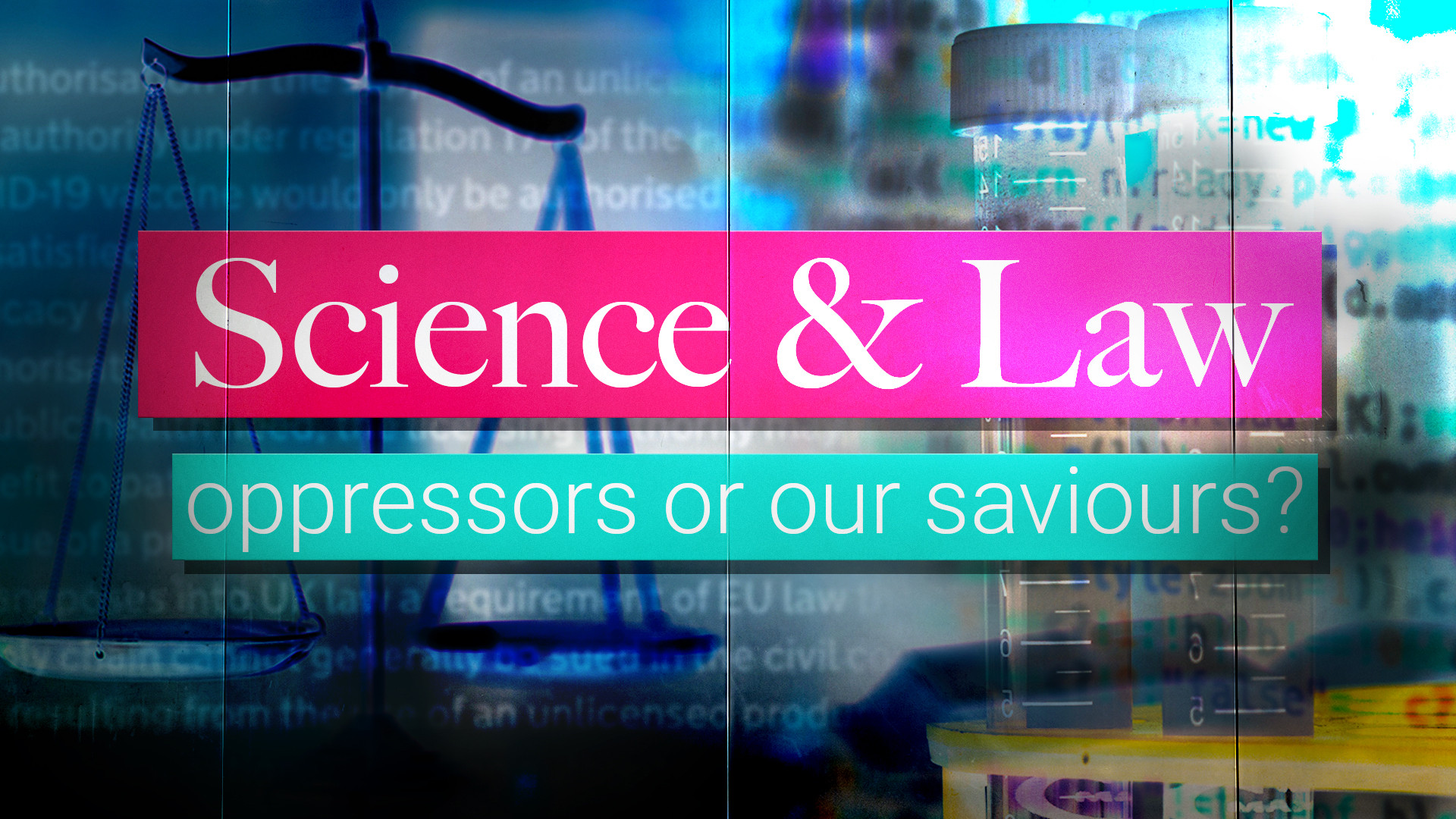 Will science and law be our oppressors or our saviour?

Two Australian academics working with the Foundation for Economic Education, Mark Hornshaw and Zachary Gorman, characterise the police action on lockdown dissenters in the state of Victoria, Australia, as “perhaps the developed world’s most oppressive and mean-spirited overreaction from the government in response to the COVID virus.”

Referencing just a selection of recent acts, they explain, “Police in riot gear are forcefully clearing out farmers markets, harassing elderly women for sitting on a park bench, snatching infants in strollers from fathers, and fining people for catching a bus without a ‘work permit.’”

Citizens in dozens of countries around the globe have seen extremes of government over-reach, albeit most more moderate than those enacted by the Victorian state government. For a growing number of us, the actions that most major governments are taking appear disproportionate to the disease in question.

Being licensed to kill is not just the stuff of James Bond movies – it’s real life. So it’s interesting that the UK has, during these unsettled times, chosen to turn into legal statute an existing power that permits government agents to kill and torture people in ways that would otherwise constitute criminality. The Covert Human Intelligence Sources Bill flew through the UK Parliament on Tuesday, almost unopposed by a margin of 180-20, such was the desire by both the Conservatives and Labour to see the law enacted.

Reading the fine print, it’s clear the Government is concerned about threats to its national security. While some of this will undoubtedly be linked to a perceived need to strengthen its defences as a result of its detachment from the security blanket of the EU, this legal power could forever change the relationship between authorities and the public.

It would be unsurprising if this opening of official doors to violent, legal, otherwise criminal, acts didn’t incite greater hostility towards those members of the public unprepared to accept the imposition of martial law that’s been linked to the arrival of a new infectious disease. Time will tell.

Social media posts suggesting that your right to travel might be curtailed if you can’t prove you’ve been vaccinated with one of the expectant, ‘approved’ Covid-19 vaccines were, until recently, being  pulled for contravening ‘community standards’ (i.e. they were categorised as conspiracy theory or fake news).

CommonPass, funded by the Rockefeller Foundation and launched by the World Economic Forum and Commons Project Foundation, has come to fruition. Trials begin this week in London, New York, Hong Kong and Singapore. It’s described as “a digital health platform designed to enable smooth passage during the pandemic by allowing travellers to carry their Covid-19 test results in a standardised, global format, thus easing international air travel.” 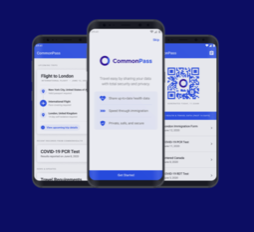 CommonPass doesn’t try to hide its intent to enforce vaccination on those who choose or need to travel by simply preventing the unvaccinated from travelling.

Security insider, Brad Perkins, who headed up CDC’s anthrax investigation after 9/11 and served as CDC’s Chief Strategy and Innovation Officer from 2005 to 2009, made an important clarification in his piece in the UK’s Telegraph, saying, “The added benefit of cross-border trust for test results is that it lays groundwork for inclusion of Covid-19 vaccination as part of health status.”

National Geographic published an article on 29th September that looks at the opaque privacy issues that will face travellers as app-based surveillance continues to expand. If you’re concerned, you better delete all apps you’re not using and turn off location services when you’re not using them – just for starters.

But what happens if you don’t want to be vaccinated, or you’re not deemed sufficiently worthy? Recall the FT’s interview with Kate Bingham, head of the UK’s Vaccine Taskforce, when she said there’s only going to be enough vaccine in the UK for those deemed at greatest risk, namely “the old, vulnerable and those working in healthcare settings”. Was this genuine or part of an elaborate psychological trick based on creating an illusion of scarcity so as to fuel demand? Anyway, if you’re able to get travel clearance by simply demonstrating immunity, whether achieved by naturally-acquired infection or vaccination, Covid parties, along the lines of old-fashioned chicken pox parties, will inevitably become de rigeur among some groups of healthy people. But attempting to recruit people to such parties won’t be as easy as it might have been, given the current state of digital authoritarianism, which has already led to bans of such content. Street party anyone?

Last weekend, a number of leading scientists, epidemiologists and doctors came together under the auspices of the American Institute for Economic Research in Great Barrington, Massachusetts. Their aim was nothing short of an attempt to shift the approach taken by governments in their efforts to combat Covid-19 around the world. The call for this shift was to create a more proportionate way of dealing not only with the disease itself (not to be confused with infections), but also taking full account of the unintended or collateral damage caused by any of those strategies.  Call it a broad-minded, independent, multi-lateral, scientific approach, one that contrasts with the myopic, siloed approach to Covid-19 that’s dominated the WHO-managed government responses to the pandemic to-date.

It wasn’t the first time such an initiative was attempted. An earlier effort, headed by Stanford’s Prof John Ioannidis, regarded as one of the most high profile, and in more usual times, influential, scientists (and epidemiologists) in the world, was Great Barrington ‘s precursor.

The declaration has seen signatures pouring in, the numbers shown represent signatories for each of the three groups at around 10 pm UK time, 7 October.

I have since signed, as have my colleagues in the ANH-Intl team, and we urge doctors, practitioners, scientists and members of the public to do the same. As dissonance builds, the numbers game may be just as important as bringing on-board those of influence.

One of the challenges is that epidemiologists, scientists and doctors don’t all share the same view, such is the uncertainty around the data, the sources of information, and the variable content of the siloes that make up the full picture of Covid and the associated medical, scientific, social, economic and political information. What’s becoming ever more interesting is the sheer weight of scientific opposition that’s developing against the so-called ‘mainstream narrative’, that I’d like to rename ‘Covid myopia’. But we still don’t know if this weight can overcome the inside track to government ears that remains the exclusive domain of a small band of doctors and scientists of the ilk of Dr Tony Fauci, Sir Patrick Vallance and Prof Chris Whitty.

Standing up and going against the flow of Covid myopia takes courage. It also means you’ll be subject to attack. That’s been the lot for ex-Stanford, White House advisor on health, Dr Scott Atlas, presently senior fellow at the Hoover Institution of Stanford University. Atlas, who now perhaps has more clout than Fauci in the White House, supports an approach similar to that posed in the Great Barrington Declaration. Its essence seems remarkably logical given the known scientific facts: maximising efforts to protect the vulnerable, optimising therapeutics for those who become ill, while otherwise allowing normal social functioning as community immunity develops.

Showing the joined up nature of social media platforms and lockdown agendas, YouTube censored an interview of Atlas that espoused his views. So much for helping scientific discourse that has for hundreds of years been crucial to achieving consensus on more controversial scientific matters. 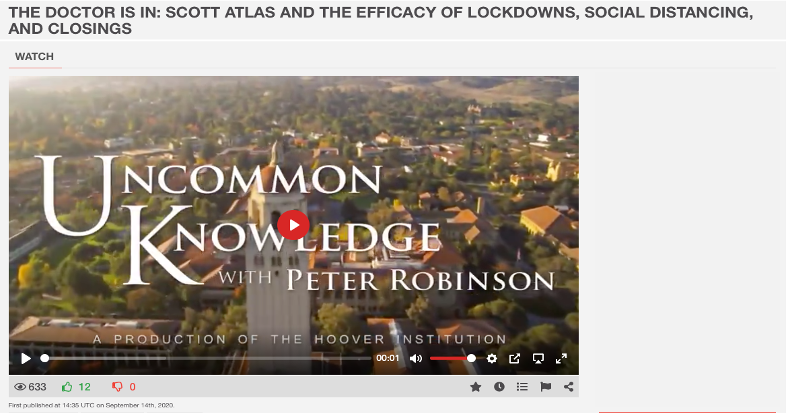 This is Scott Atlas’ interview (23rd June 2020), censored by YouTube, playing off BitChute.

But there was more to come. On 9th September, nearly 100 of Atlas’ colleagues at Stanford challenged him via an open letter, claiming “falsehoods and misrepresentations” and “fostering” views that “run counter to established science and, by doing so, undermine public-health authorities and the credible science that guides effective public health policy.” 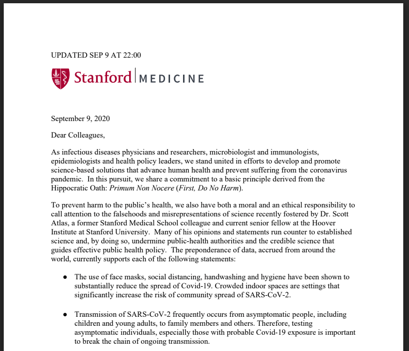 As signatures pour in to support the Great Barrington Declaration, the UK Government has just announced its decision to reject the call. The Government argues the notion of protecting the vulnerable is an unproven assumption. When you suffer from Covid myopia, we have to assume you also think that the collateral destruction of society, industry and social function is unproven and therefore non-existent.

It’s no wonder more and more people are becoming ever more fearful over the response by the current crop of crony leaders than they are of the coronavirus itself, the attributes of which seem, by comparison, to be both less harmful and more predictable than those of the humans pulling the strings.

The pushback against scientific dissidents is currently not too difficult for our crony leaders to handle. They can just reject the proposals and the people who issue them using unspecified or unjustified reasons, amplified by a paid-for media. Fake news and conspiracy theory are two very useful disposal bins that are always close at hand.

But if governments have over-reached their constitutional and legal powers, and that can be proven, that’s a game changer. So there’s no shortage of people trying to get legal actions off the ground – believe it or not, for the public good.

Legal strategies targeting policies, authorities, complicit companies and individuals in government are being initiated thick and fast. They vary from very well organised attempts to convict global leaders for crimes against humanity, in the mould of the Nuremberg trials, to individual assaults on particular measures, such as 10pm curfews. They include the well publicised challenge of British entrepreneur Simon Dolan against the UK lockdown, which failed initially, but the appeal hearing will be heard on 29th October.  Reassuringly, in a case that sounds like state-sanctioned genocide (still considered a conspiracy theory), UK health minister Matt Hancock will now likely face a legal challenge over the government’s blanket issue of illegal ‘Do Not Resuscitate’ (DNR) notices.

If you want to get a feel for the seriousness of the legal fire power that’s building internationally, you could do worse than listen to Dr. Reiner Fuellmich, a German trial lawyer and expert on international law, corruption cases and medical law. Dr Fuellmich is working as part of an international network of lawyers whose aim is to challenge the perpetrators of national lockdowns and associated measures, referred to in his words as the “corona fraud scandal”, as crimes against humanity.

What will happen in the the days, weeks and months ahead of us is uncertain. But irrespective of this uncertainty, adding your voice to those of Drs Kulldorf, Gupta and Bhattacharya, along with the nearly 10,000 scientists and doctors and 90,000 members of the public, who’ve already done so, will move the dial in the right direction.

Next, we ask that you please forward this article and/or the link to the declaration as widely as you can.

As you’ll discover in our second piece this week – the tide may be turning. That’s because our combined voices are getting ever louder and being increasingly heard.