Home News Saturated fat is not the culprit in heart disease

Saturated fat is not the culprit in heart disease

Can we jettison misguided and dangerous recommendations on fat and heart disease – please?

It’s not often that the mainstream media notices an academic meta-analysis, or study of studies – particularly if it goes against the tide of prevailing dietary advice. But that’s what happened with a recent Australian study, published in the British Medical Journal (BMJ). 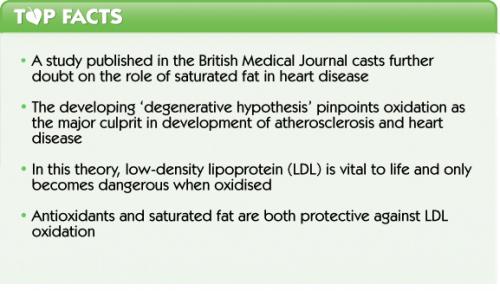 Saturated fat: not so bad after all?

The BMJ paper was an update of a previous meta-analysis by the same investigators, looking at the consequences for cardiovascular health of replacing dietary saturated fats (i.e. butter) with polyunsaturated, omega-6 fatty acids (PUFAs). This time around, the group reassessed the results of the Sydney Diet Heart Study (SDHS), a randomized, controlled trial involving 458 patients that compared the rates of cardiovascular disease among subjects who increased the amount of omega-6 PUFAs – specifically, linoleic acid from safflower oil – in their diet with patients who continued their normal diet. As well as reanalyzing the results, the investigators incorporated them into their previous meta-analysis.

The SDHS results were clear: replacing dietary saturated fats with omega-6 PUFAs increased all-cause mortality, cardiovascular mortality and mortality from coronary heart disease. Not only that, but, “An increase of 5% of food energy from [omega-6 PUFAs] predicted 35% and 29% higher risk of cardiovascular death and all cause mortality, respectively”. Similarly, the updated meta-analysis found that increasing dietary omega-6 PUFAs in isolation was associated with increased mortality risk from both coronary heart disease and cardiovascular disease overall. And Omega-6’s are the main components of polyunsaturated fats in the Western diet – and they are found in vegetable oils and margarines — the very things we started to eat more of forty or so years ago when we were warned saturated fats would give us heart disease!

By contrast, the SDHS found that when dietary omega-3 PUFAs were increased alongside omega-6 PUFAs, to more closely resemble the 1:1 ratio enjoyed by our ancestors, both coronary heart disease and cardiovascular disease risk were reduced.

Time for a new model

According to the prevailing dietary wisdom, this shouldn’t have happened – and the usual suspects are busily trying to pretend that they haven’t, although it’s notable that they can’t present a unified front on this one. Current mainstream recommendations hold fast to the ‘lipid hypothesis’, which proposes that the cholesterol found in saturated fats raises blood cholesterol, particularly low-density lipoprotein (LDL-C) or ‘bad’ cholesterol. Because the mainstay of the theory is that raised blood LDL-C is a major contributor to atherosclerosis and heart disease, statin drugs can be considered the ‘golden child’ of the lipid hypothesis. 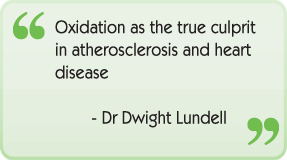 Oxidation is the key

Experts like Dr Dwight Lundell have for some time pointed to oxidation as the true culprit in atherosclerosis and heart disease. According to this alternative theory, dubbed the ‘degenerative hypothesis’, LDL-C only becomes a problem when it becomes oxidised. In fact, LDL-C is a misnomer, since all LDL molecules contain cholesterol. Far from being ‘bad’ in any way, LDL is absolutely vital for life, since the body uses it to transport important nutrients, including cholesterol, from the liver to tissues and organs.

Lipoproteins, such as LDL, consist of a core of fats (triglycerides) and fat-soluble vitamins (Figure 1), surrounded by a phospholipid membrane penetrated by cholesterol molecules. In this way, water-insoluble cholesterol can be transported around the body in water-soluble lipoproteins. Some of the membrane lipids are delicate PUFAs, and these can become oxidised – and toxic – in people who eat a poor diet or don’t exercise, among other factors.  Not only is oxidised LDL a sensitive marker for heart disease risk, it is strongly implicated in the development of atherosclerosis. 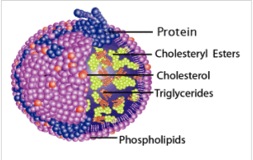 Protecting the heart with saturated fats and antioxidants

Clearly, then, it follows from the degenerative hypothesis that a diet high in antioxidants will protect against LDL oxidation. Integrative medicine practitioner and ‘paleo diet’ advocate Chris Kresser describes the antioxidant glutathione as the ‘bulletproof vest’ that protects against dangerous oxidation. Glutathione-boosting strategies include exercise, cruciferous vegetables, sulphur-containing foods like garlic and onion, nutrients including alpha-lipoic acid, selenium, vitamins B12 and B6, folate and glycine, and botanicals such as milk thistle, cordyceps, gotu kola, and broccoli seed.

Also, since it is the delicate PUFAs in the LDL membrane that become oxidised, a diet high in PUFAs will increase the risk of oxidation, since more PUFAs will be available to be packaged into LDL membrane. This is especially true in modern, Western diets with their high omega-6:omega-3 PUFA ratios. On the other hand, saturated fats may well be protective, since their chemical structure makes them highly resistant to oxidation.

This new thinking is a long way from the theory that arteries are like pipes and cholesterol is sticky gunk that accumulates and eventually blocks them up. As an hormone precursor and constituent of cell membranes, cholesterol is vital to life, as is the crucial transporter LDL. Surely, it can’t be long before the medical establishment – or even dieticians – begins to take notice and catch up.